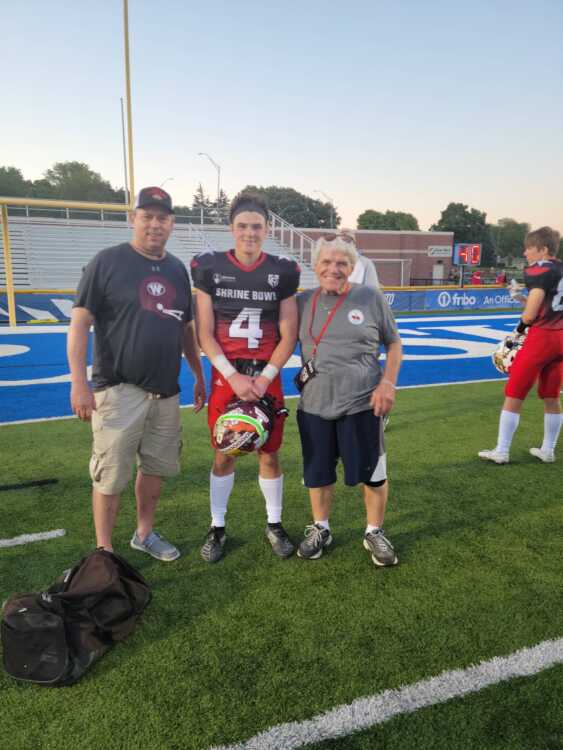 Kurt Frenzen’s North squad used a vicious, swarming defense to slow down Nebraska Gatorade Player of the year, Cole Peyton (Omaha Westside) to give the North squad a hard fought 10-3 victory over the South team in front of an estimated 3,500 fans.

Men like Defensive Player of the Game, Jimmy Quaintance (#22), who had a key opening half interception and consistent smothering coverage of South receivers all night, were the key to the North team’s sparkling “D”

North defensive lineman Isaac Montomery (#56) was another key to that North “D”, as the Lincoln High product opened some eyes with his THREE sacks of Cole Payton and constant presence in that South offensive backfield.

Meanwhile on the North’s offensive side of the football, it was Bennington’s sensational quarterback, Kale Bird, who stole the show. Bird, who stands just 5-10 and weighs in at 170 pounds, came away with the Shrine Bowl’s Offensive Player of the Game honors with his 17 of 26 passing performance (10 of 12 in the opening half) for 133 yards.

The North team scored on the opening possession of the football game, played in 90 degree temps, driving 60 yards in 10 plays. The drive was culminated by a one yard scoring blast by three time 1000 yard rusher Dexter Larsen (#6) of Blair.

Kale Bird hooked up with Waverly’s two-time 1000 yard rusher Zane Schawang for a pair of passes totaling 33 yards. Schawang displayed some Houdini like moves, ala Jeff Schawang (Zane’s Dad) on the 2nd reception, making three or four defenders loose some undergarments on the UNK artificial turf along the way.

You may recall Jeff Schawang rushing for 1,051 yards on that superior Falls City Sacred Heart team of 1989.

That Larsen touchdown ended up being the only one of the entire 2021 Shrine Bowl, as both defenses came up with big play after big play, a trademark of high school post season all-star tilts. In fact the North offense could muster only 181 yards of total offense following the Dex Larsen TD.

The South team, coached by Platteview super coach Mark McLaughlin, was never out of it, and actually sliced a 10-0 North advantage to 10-3 with a booming 26 yard field goal by Papillion LaVista South kicker Trenton Brehm (#37) with 9:22 left in the 4th quarter.

The field goal, by the way, drew many OOO’s and AHHH’s from Bandmaster Dan Sodomka’s Shrine Bowl band as it sailed far above their heads into the setting sunlight. Sodomka’s 175 member band was seated in the North end zone bleachers and were in a perfect position to enjoy Brehm’s skyward boot.

The highlight of the game (to me anyway) was Cole Peyton’s electrifying 4th quarter 75 yard run, stretching from the South 9 yard line all the way to the North 16. Peyton, who is bound for North Dakota State this fall, unleashed the beautiful zig-zag trophy dash, cutting back against the grain, making North defenders miss right and left.

Peyton’s 75 yard dash, by the way, was just one yard short of the Shrine Bowl record. And could that record run be Larry Frost’s 76 yard TD sprint for the South squad back in 1965, the only touchdown in the game in the South’s 7-0 win over the North?

*The way Shrine Bowl Executive Director Dave McDonald handled ALL phases of this year’s festivities. The man is a genius, period, as evidenced by the way he pulled off last year's staging of the “impossible game”. So many doubters nationwide in 2020, but Mr. McDonald knew all along that he could pull it off, the first actual athletic event of any type in the entire United States following the national Covid shutdown in March.

The man has remarkable courage and continues to be a true Leader.

*The way 8-Man players Christian Rhystrom (Cross County) and super athlete Sutton Pohlman of Stanton performed in this game. NO FEAR, and the “we belong here and this is how we play the game of 8-Man football” attitude, which was wholeheartedly accepted by their teammates.

*Ord kicker Kelen Meyer. Of course he booted a field goal for the North.

*South Punter Brody Darnell and his rocket-like punts. I believe I counted half a dozen of those bad boys that averaged 52.6 yards a boot. Yeah, they were so high they came down with snow on ‘em in 90 degree weather. I kid you not.

*The powerful runs of Omaha Skutt tough guy, Sam Scott. Good lord, can one defender bring this guy down?

*The intense coaching of North assistant Jud Hall. The man is PURE football, is brilliant and simply loves the game and his coaching shows it.

*Sad notes: Players injured during the week and not being able to “GO” tonight…..Weeping Water’s Weston Reiman, an imposing figure at 6-2, 290 pounds. Hastings High speed merchant Carson Shoemaker, who injured a hamstring on day 2 of camp and couldn’t go. Shoemaker could have been a force in this game. And Grant Miller of Lincoln Southwest. Would have loved to see him play.

………...And finally. A little bit of HEAVEN in early June was this Shrine Bowl. How much better can it get? THANK YOU DAVE MCDONALD!