Stanton’s 34 point second half explosion too much for Arcadia/Loup City. 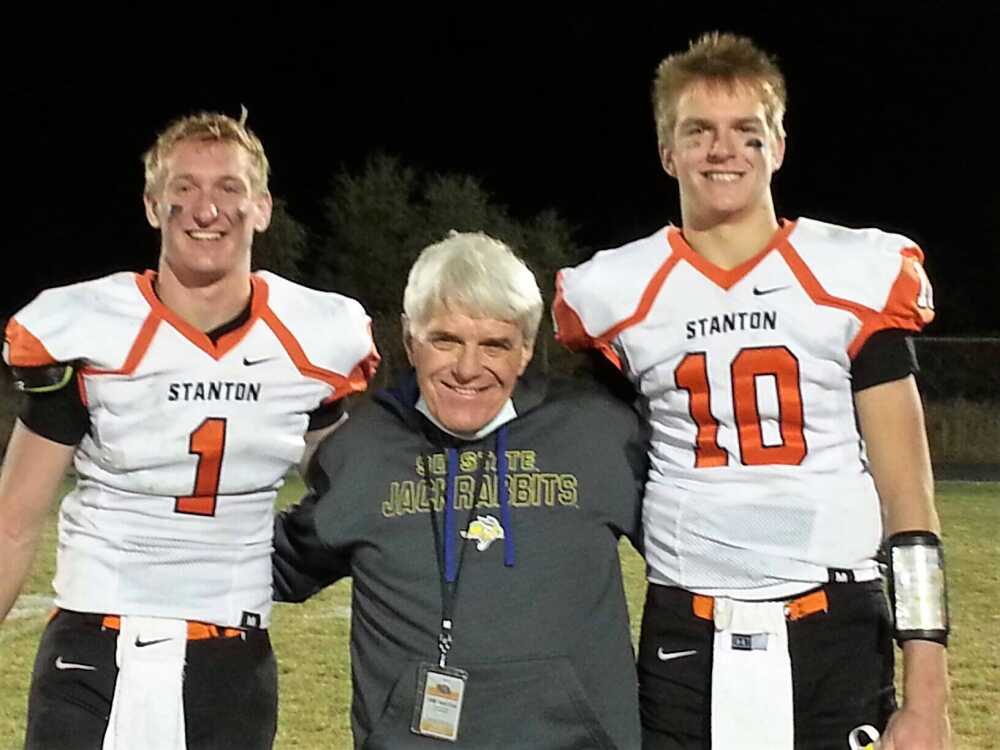 It was a glorious night for football that could only have been ordered by none other than the Football gods. Not only did those gridiron gods order up the perfect, near windless weather, but Mother Nature provided some unbeatable natural lighting in the form of a full Hunters Moon.

And down at field level, the Class D-1, Eight Man matchup could not have been seeded any better than what we had in Loup City tonight. The game featured a pair of teams voted by yours truly as “the two teams you would NOT want to draw in the early rounds in Class D1.”

And evenly matched? The pair of D-1 powers had each scored exactly 412 points coming into tonight's clash, with Stanton giving 193 points and Arcadia/Loup City allowing just 184. Each team had their “tough luck, turned raving success” stories to brag about as well.

There was the great Sutton Pohlman, who lost most of his junior season at Stanton with an injury after being named all-district in both his freshman and sophomore campaigns. For Arcadia/Loup City it was more recent. QB/RB Jadyn Scott suffered a broken arm just days before season opener, and RB Tryon Calleroz missed the first two games with an injury. Scott did not return until midway through the 2020 season.

But all hands were on deck for this baby and the hits were vicious and the plays were spectacular.

It took just 7 plays and two minutes forty five seconds for Arcadia/Loup City to score on the opening possession of the ball game. QB Jadyn Scott unleashed a zig-zagging, cut-back 40 yard touchdown run that probably covered 55 yards with all the horizontal running the coaches son did on the play.

It took Stanton just 3 plays to spring Sutton Pohlman 53 yards for a the matching score and the game was already knotted at 6-6 three minutes, forty five seconds into the contest.

The Rebels answered right back on the ensuing drive, chewing up four minutes and two seconds of clock, going 65 yards for the score. This time it was Jadyn Scott firing a 9 yard touchdown to to junior Prestyn Rogers, who split two Stanton defenders for the easy scoring reception.

Right about now, Stanton had no answer for Arcadia/Loup City’s sweep action with Jaydn Scott doing most of the damage, and when Scott wasn’t looking nearly unstoppable on his runs, he was completing passes to All-State linebacker Clayton Detleffs, Prestyn Rogers, Drew Lewandowski and Tryon Calleroz.

Stanton knotted things up with just 24 seconds left in the opening stanza when QB Parker Krusemark slipped in for a one yard touchdown. The tough running junior reeled off runs of 16 and 7 yards in the 4:20 drive.

The defenses took over in the second quarter as neither team mustered much of an offensive threat until Stanton put together what may have been a momentum changing 51 yard drive, culminating with a Parker Krusemark 5 yard touchdown pass with just :14.2 seconds left before halftime.

Krusemark then blew into the endzone untouched for the double PAT and the visiting Mustangs had themselves a 22-14 lead over Arcadia’Loup City at the half.

Stanton received the second half kickoff and on what may have been a very damaging play in the long range scheme of things, Parker Krusemark dropped back to pass. Apparently the Arcadia/Loup City defense was expecting a run, because when I glanced downfield, both 6-1, 240 pound junior Kamden Dusatko and 160 pound sophomore Joseph Buttefield were streaking wide open downfield.

Krusemark chose to heave the pass downfield to big Kamden Dusatko, who not only caught the ball, but displayed amazing speed for a big man, then put some sweet weaves in his run toward then goal line to avoid the tackle.

The play covered a damaging 51 yards and the scary thing (for Arcadia/Loup City) was that both Stanton receivers blew by defenders without being picked up. Butterfield could have easily scored had Parker Krusemark chosen to throw to him.

So in a minute thirty two seconds into the 3rd quarter, Arcadia/Loup City was facing a 28-14 deficit, which at the time did not appear too concerning given the talent the Rebels had, plus one of the best head coaches in 8-Man football in Mike Scott.

Arcadia/Loup City had to answer here and speed merchant Prestyn Rogers set the Rebels up with a short field with his sparkling 38 yard kick return to their 39 yard line.

Mike Scott’s troops then fashioned a nice drive downfield with Jadyn Scott converting on a 4th and 5 at the Stanton 22. The Rebels drove it all the way to the Mustang 7 yard line where Jadyn Scott then found Logan Gregory for a touchdown, but a holding call negated the score. Stanton would then eventually snuff out the drive at the Mustangs 10 yard line.

What may have turned out to be the most damaging drive of the game came next. Facing a 3rd and 10 at their own 19, Stanton quarterback Parker Krusemark broke loose for an impressive 35 yard sprint down the Mustang sideline. Only a touchdown saving shove out of bounds at the Rebels 25 yard line saved the day for Arcadia/Loup City.

But before the Rebels could regain their composure, it was once again Krusemark, this time cruising in for a touchdown from 25 yards out. And with 1:47 remaining in the 3rd quarter, Arcadia/Loup City’s comeback trail seemed a a little steeper to climb. A 34-14 type of comeback climb.

It was all Stanton in the 4th and money quarter. Arcadia/Loup City quarterback Jadyn Scott suffered three interceptions, all by Parker Krusemark, and a lost fumble, which was recovered by Mustang senior Nathan Wragge.

Parker Krusemark scored his 3rd touchdown of the perfect weather night, on a 2 yard run. The Krusemark scoring run was set up by a 35 yard run right up the gut by Stanton fullback Gage Tighe’s 35 yard dash down the Rebels sideline.

Krusemark’s 2nd interception of the night set up a 47 yard touchdown gallop by Sutton Pohlman at the 7:47 mark of the 4th quarter. A PAT boot by sophomore Brayan Acuna gave Stanton a commanding 49-14 lead, an advantage Arcadia/Loup City simply could not overcome.

5-7, 150 pound junior Damien Erickson then got in on the scoring action when he walked into the Rebels endzone with his 7 yard TD dash. Acuna again booted the PAT and Stanton had completed the 56-14 shocker with 4:44 still remaining on the running clock, which had been implemented following Sutton Pohlman’s 47 yard scoring sprint with 7:47 left on the clock.

A late bright spot for Arcadia/Loup City, by the way, was big 6-0, 175 pound freshman Trey Van Slyke’s late running in this game. Van Slyke came the bench and ripped off runs of 8, 15, 5 and 10 yards, often times bowling over Stanton reserve defenders along the way.

For Stanton, who had a pair of 100 yard rushers, it was QB Parker Krusemark leading the way with 115 yards on 17 carries and 3 touchdowns. Sutton Pohlman, a sure-fire All-Stater, ran for 103 yards on just 6 touches and a pair of long distance scoring sprints. Fullback George Tighe chipped in 53 big oneness on just 7 totes.

For Arcadia/Loup City, it was the workhorse, senior quarterback Jadyn Scott leading all rushers with his 139 yards on 25 carries and that 40 yard TD run.

Parker Krusemark threw only 7 passes, completing 4 of those for 69 yards and two touchdowns. For Arcadia/Loup City, Jadyn Scott was hot early in his passing game, connecting on his first 5 passes for 48 yards and a touchdown, but suffered through a 1-13 drought the remainder of the way that included those three picks.

Stanton ended the night with 297 rushing yards on 36 carries, a 10.1 average a pop. Mustang quarterback Parker Krusemark completed 4 of 7 passes for 69 yards and a score, giving Stanton 366 yards of total offense.

Arcadia/Loup City ran the ball 38 times for 209 yards and the QB combination of Jadyn Scott and freshman Connor Slobasczewski (get that name on the back of a jersey) ended the night completing 7 of 22 passes for 55 yards, one touchdown and 3 interceptions.

Stanton moves on to meet Class D1, number one Dundy County/Stratton in Benkleman next Friday. The Tigers scored the game’s final 24 points to turn back a determined Nebraska City Lourdes squad Friday, 48-30.

Arcadia/Loup City ends a very fine season at 6-4, despite all the early season injuries.

*I stated in a Tweet earlier in the day that I had never talked to Rebels head coach Mike Scott, despite seeing a handful of Arcadia/Loup City football games the past few seasons.

Fact of the matter is, I just have never been on his sidelines for any of those games, but tonight, after this bitter end to the 2020 season, Coach Scott, assistant Aaron Habe, an old Ravenna friend and another assistant coach, had a lengthy discussion, a most pleasurable one I will never forget.

It takes a real man to go out of his way to talk at length after his team’s season has just ended. Coach Scott, you are indeed a great man, as well as a super football mind and your players reflect your high values.