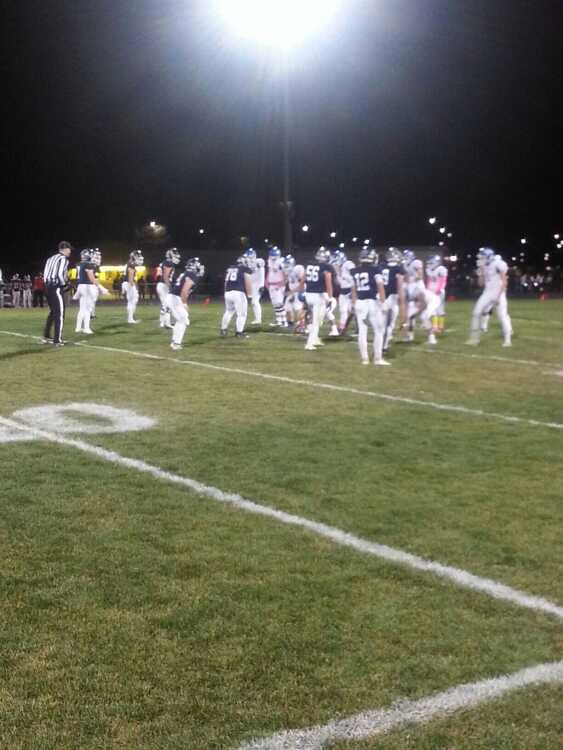 Class C-1, 3rd rated St. Paul was the last one standing when all the smoke cleared in a classic, smashmouth football game for the ages at Adams Central high school Friday night. Two of C-1’s finest programs traded big time punches in a heavyweight bout not suited for the weak at heart, and when all the smoke cleared, St. Paul was the last team standing in a defensive struggle that would rival some of the best games this guy has witnessed in the past 5 years.

All the offensive heavyweights were there. St. Paul’s Eli Larson, who was just 144 yards away from the coveted 5000 yard career rushing mark, and Tommy Wrobelewski, the Division One commit (Wyoming). The there was Adams Central and their new sophomore rushing sensation Hyatt Collins, and the Coaches sons dynamic quarterback/wide reciever/kicker duo of Cam Foster and Tyler Slechta.

All the offensive threats a team(s) would ever need, poised and ready to explode into a three hour long, high scoring fireworks display that would short circuit any football complex scoreboard.

But it never developed. Instead, a blood and guts, vintage NFL Black and Blue Division Packers/Bears type game unfolded, often times limiting offensive stalwarts like Larson and Collins to small, hard-earned, three yards and a cloud of dust type gains, if that.

It was a Classic high school football game where a team waited for a critical blunder by their opponent, a mistake or turnover that could be turned into precious points that could spell the difference between a win or a loss.

The game, marred by a stiff 20-25 mph East wind, definitely affected the passing game, but it certainly didn’t appear that way after St. Paul punted the ball away on their openeng possession. It took Shawn Mulligan’s Patriot offense just one play to send shockwaves up and down the St. Paul sidelines , when QB Cam Foster flaired a little pass flat pattern pass to speedy 145 pound Drew Bonifas.

The slippery junior latched on to the pass, side-stepped a few St. Paul defenders and trusted his speed to blow past the remaining St. Paul defenders for a shocking 53 yard touchdown journey down the A/C sideline. Automatic Tyler Slechta booted the PAT and the 6-1 Patriots were on top by a 7-0 count just 2:33 into the Class C-1, District 6 defacto championship game.

The game remained that way until halftime, but in the meantime, a slew of vicious hits, crunching blocks and killer blitzes took their toll on anyone not tough enough to take the punishment.

The Adams Central defense, led by the hard-hitting Smith brothers combination of senior Slade (#7) and junior Oaklyn (#24), plus the menacing defensive line work of Sam Hemberger (#55) and linebacker Blaine Pleak (#51), were ganging up to halt Eli Larson to just 57 first half yards on 17 carries and Tommy Wrobelewski to a meager 9 yards on 4 carries.

On the other side of the ball, there was an angry Eli Larson, who broke through the Patriot offensive line to spill Hyatt Collins for more than one loss, holding the sophomore star to a frustrating first half rushing total of 20 yards on 8 totes.

The passing game was non-existent for St. Paul QB Brenden Knapp, who completed 2 of 5 passes for 11 yards and unfortunately one of his completions was to Adams Central defensive back Tyler Slechta.

After Cam Foster’s opening play 53 yard TD strike to Drew Bonifas, things dried up completely through the air, with the only connection on his next 4 pass attempts resulting in a jarring, bone rattling 3 yard loss Slade Smith, who was drilled into the A/C turf by a hard-charging Tommy Wrobelewski.

St. Paul came out smoking after the halftime break. On the Wildcats 2nd play from scrimmage, fullback Trevor Dugan bolted through a gaping hole at the line of scrimmage, ripping off a tackle-shedding 52 yard scoring jaunt, that carried from the St. Paul 33 to the Adams Central 13 yard line. But the Patriot defense stiffened, turning ‘Cats away on a 4th and 2 at the Adams Central 5 yard line.

St. Paul would finally hit the board with 3:38 remaining in the 3rd quarter, when Eli Larson broke through the Adams Central right side for a 13 yard gain, then came right back on the same play to rip off a sparkling 26 yard touchdown jaunt. Place kicker Sam Kramer’s PAT boot just missed left and St. Paul was still down by one, 7-6.

Adams Central would cash in on the very next possession on the “basketball coaches sons” aerial connection show. Tyler Slechta, whose Dad, Tough Tommy Slechta is the assistant hoops coach, ran under a perfectly thrown 34 yard touchdown pass by Cam Foster, whose Dad Zach Foster is the Patriots head basketball coach.

The automatic Slechta then missed his PAT try, which may have been caused by a low snap, and the score then was 13-6 in favor of the Patriots.

Trevor Dugan continued to pile up the yards from his fullback position, cashing in on an Adams Central defense that keying on Eli Larson and Tommy Wroblewski. The tough running Dugan twisted and turned his way to a 5 yard scoring run three minutes and 49 ticks into the 4th quarter, and with Kramers PAT, the Wildcats had suddenly tied things up at 13 apiece.

The defenses took over for the remainder of the quarter, but a couple of major things occurred that altered the complexion of this classic battle. First and foremost, Adams Central starting quarterback Cam Foster was forced to leave the game after suffering what appeared to be a high ankle sprain. Foster, who was playing defense at the time, did not return to see any further action.

Secondly, St. Paul had a chance to win this baby with 1:12 left in the 4th quarter. With a short field in front of them at their own 44, the Wildcats drove all the way to the Adams Central 5 yard line, managing the clock to near perfection. Once again, it was the quick-stepping, hard running of FB Trevor Dugan that played a major role during the drive. Dugan’s runs of 6 and 15 yards during the possession highlighted the final drive, which featured a converted 4th down and one play on the Patriots 46 yard line.

It all came down to the 4th and goal at the Adams Central five yard line and Coach Rusty Fuller chose to send Sam Kramer into the game to attempt a 19 yard field goal. Well, the game winning attempt was not good and A/C took over on it’s own 20 with a possible 3 or 4 plays left in regulation.

At that point, junior Jacob Eckhardt took over the quarterbacking duties for Adams Central at the Patriots 20 yard line. Eckhardt promptly completed a pass to 1000 yard rusher Hyatt Collins, but the Wildcats Tommy Wroblewski jumped the pass pattern to spill Collins for a 3 yard loss.

Eckhard then fired an incomplete pass on the following play, but injured his hand on the play, left the field, and also did not return to action. Then, things then got a little crazy on the game’s final play of regulation.

If you will recall, Adams Central starting quarterback Cam Foster had been helped off the field minutes earlier with that high ankle issue. Backup signal caller Jacob Eckhardt was rendered unavailable with that injured hand on the previous play. So send in the 3rd string quarterback to kneel down on the game’s final play in regulation, right? Wrong.

That was not an option for the Patriots because 3rd string QB (sophomore Sam Dierks?) was out with COVID issues, so head coach Shawn Mulligan had one choice remaining. Insert 5-9, 150 pound FRESHMAN, Jayden Teichmeier.

Mulligan sent the 9th grade signal caller into the frey and Teichmeier promptly took a knee, sending the game into Overtime, right? Wrong.

Instead Hyatt Collins took the ball and rambled 20 yards up field before being ushered out of bounds at the ‘Cats 40. The St. Paul coaching staff took a deep breath and prepared for Overtime with the teams deadlocked at 13.

St. Paul had the first possession in the clockless Overtime period and here’s how it played out:

2nd and Goal at the 9 - Tommy Wroblewski runs for 8 more down to the one on a jet sweep.

3rd and Goal at the 1 - Eli Larson crashes in for the touchdown, Sam Kramer boots the extra point. St. Paul 20, Adams Central 13.

2nd and Goal at the 4 - Hyatt Collins is stopped for no gain.

3rd and Goal at the 4 - Jayden Teichmeier fires an incomplete pass.

4th and Goal at the 4 - Teichmeier takes the shotgun snap and spins right for a play action pass. The freshman finds all his receivers covered, then calmly sprints in for a 4 yard Touchdown. Slechta boots the PAT and the teams are all square at 20.

2nd and Goal at the 8 - Hyatt Collins runs for two more yards.

3rd and Goal at the 6 - Hyatt Collins rushes for 4 yards down to the two.

4th and Goal at the 2 - Shawn Mulligan opts to send in automatic Tyler Slechta to attempt a chip shot, 19 yard field goal. The snap is low, and Slechta’s kick is short. St. Paul 20, Adams Central 20.

2nd and Goal at the 8 - Coach Rusty Fuller once again calls the jet sweep right with Tommy Wroblewski carrying the mail. Wroblewski heads for the pylon with the Smith brothers, Slade and Oaklyn both converging for the tackle in hot pursuit.

Tommy Wroblewski scores the winning, 2nd Overtime TD and the Wildcats are victorious, 26-20.

Junior fullback Trevor Dugan, whose highest rushing output was 83 yards a year ago in the GICC game, led the St. Paul ground attack with 136 yards on 18 carries and a touchdown. Two-Time thousand yard rusher Eli Larson added 122 yards on 28 carries with two touchdowns. Larson, who needed 144 big ones to reach the coveted 5000 yard career rushing mark, fell 22 yards short and will have to wait a week to surpass the mark against Twin River.

Larson, by the way, has 1,362 yards rushing through 8 games this fall.

Quarterback Brenden Knapp completed just 3 of 7 passes for 38 yards with no touchdowns and an interception. Once again, it was Tommy Wroblewski and Eli Larson pacing the Wildcats defense. Wroblewski recorded 9 tackles, seven of which were solos. Eli added 7 stops with 6 solo tackles.

For Adams Central, it was sophomore Hyatt Collins leading the rushing attack with 103 hard earned yards on 25 carries. The 103 yards elevated Collins over the one thousand yard mark, giving him 1,102 yards rushing for the season.

Cam Foster hit 4 of his 10 passing attempts for 85 yards and two touchdowns with one INT. Sure tackling Slade Smith, a sure fire All-State choice at linebacker in 2020, led the Patriots with a monster 25 tackles (7 solos, 18 assists). Slade’s little bro Oaklyn added 10 stops with a pair of solo tackles, while linebacker Blaine Pleak made 16 tackles (15 assists) followed by DL Sam Hemberger chipped in 13 tackles (2 solos)

St. Paul, who clinched a Class C-1 playoff berth with the District 6 championship, will return home to close out the 2020 regular season with 0-4 Class C-2 Twin River, a 30-0 loser to GICC Friday.

Adams Central closes out their regular campaign with a road trip to Geneva, where the Patriots will face 3-5 Fillmore Central, a 64-0 loser to Central City Friday night.