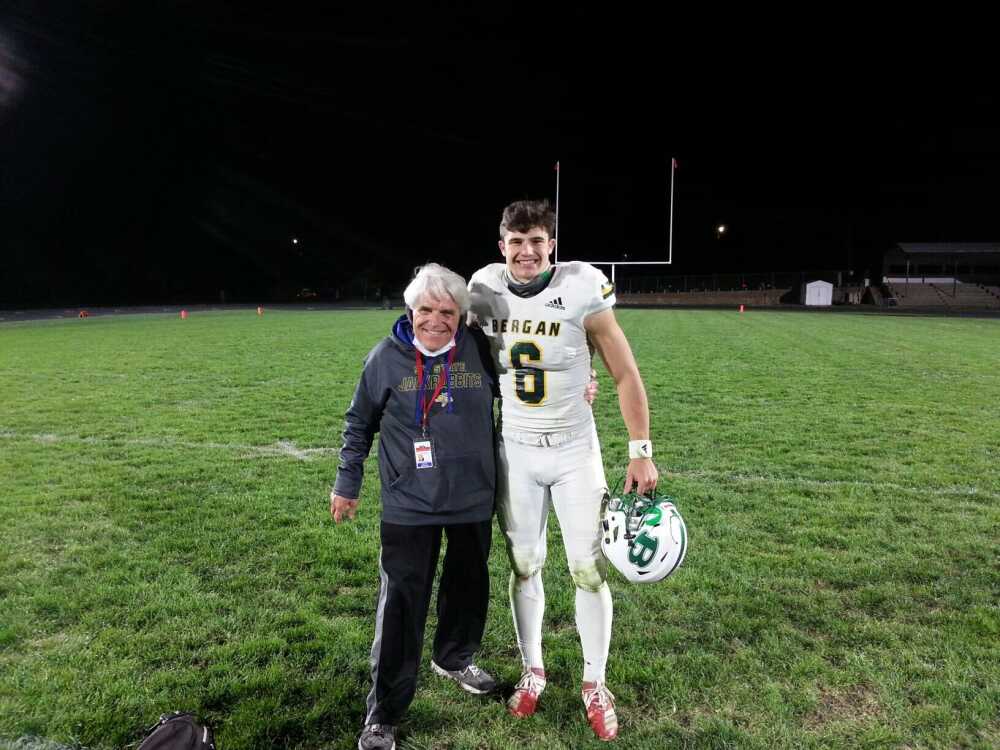 Archbishop Bergan spotted Aquinas an early 7-0 lead, then reeled off thirty one unanswered points, to take a 31-7 win over David City Aquinas, spoiling the Monarchs homecoming.

All-State candidate and Dual-Threat quarterback Koa McIntyre threw for a pair of touchdowns and ran for another, fueling the Knights first victory over Ron Mimick’s Aquinas forces since 2013.

Things did not start out very well for undefeated Archbishop Bergan in this one. The Knights lined up like they were going for it on a 4th and one at their own 29 yard line on their opening possession. Instead, Koa McIntyre dropped back a few steps after receiving the snap to attempt a quick kick, but Aquinas defensive lineman Rowdy Truska broke through to block the attempt. T

The Monarchs were then in business with short field on their first possession of the night on the Bergan 16 yard line.

It took just four plays for powerful junior fullback Michael Andel to blast over for a touchdown from 11 yards for the score. Senior Brian Cech booted the PAT and Aquinas had themselves a 7-0 lead, two minutes and four seconds deep into the first quarter.

Bergan bounced right back on their ensuing possession, although it started out with a 5 yard loss caused by a bad snap from center. Not to worry though because quarterback Koa McIntyre came through twice with pass completions with Bergan facing 3rd and long situations.

The talented junior hooked up with senior Shea Gossett for a 29 yarder, then connected with classmate Alex Painter for 12 more, before finding Gossett for a 17 yard scoring strike to complete the 9 play, four minute, forty six second drive. A pass interference call, which advanced the ball from the Aquinas 34 to their 18 yard line didn’t hurt matters either.

On Fremont Bergan’s next possession, which started at the Aquinas 40, the Knights once again moved the football.

Junior RB Chris Pinales promptly advanced the ball from the 40 to the Monarchs 24, but the Aquinas “D” came to life to force a turnover on downs at the 29, side-stepping a second straight Bergan score.

The teams traded possessions until the Knights Koa McIntyre rolled to his left on a play action pass, finally uncorking a perfectly thrown 46 yard pass to a well covered Jarret Boggs, who then advanced the ball to the Aquinas 10 yard line. It was Aquinas John Prohaska’s timely tackle that prevented Boggs from going all the way.

It was at that very moment in this football game that Bergan running back Chris Pinales began to emerge as an actual running threat in this monumental matchup between two of Class C-2’s finest football programs.

The shifty 5-9, 165 pound junior back ran for 2 yards, then broke through a huge hole off the right B-Gap for a sparkling 8 yard touchdown blast. The Pinales score gave Bergan it’s first lead of the game at 14-7 with 3:27 in the 2nd quarter showing on the Memorial Field clock.

A fumble by the Aquinas return man on the ensuing kickoff and recovery by the Knights, gave Seth Mruz and the boys yet another shot 3:20 before halftime, with the ball sitting at the Monarchs 29 yard line.

Aquinas would have no part of it though, squelching the Knights possession before it even had a chance to get started. In fact, a pair of losses forced the Knights all the way back to the Aquinas 46.

Koa McIntyre then punted the ball down the the Aquinas 17, where the Monarchs took over and fared no better, going 4 and out after grinding out one first down.

Archbishop Bergan would have one more opportunity to punch one in before halftime, beginning their drive in good field possession at their own 44 with just 30 seconds remaining in the 2nd stanza.

McIntyre kicked off the drive by hitting classmate John Janke for 5 yards on first down, then hooked up for a big 23 yard connection with 6-3 170 pound junior Gavin Logemann. The McIntyre to Logemann completion ended up at the Aquinas 27, where freshman Alex Langenfeld was then sent in to attempt a 44 yard field goal.

At the time, I wondered why Coach Mruz inserted Langenfeld into the game? After all, his two previous PAT kicks barely limped through the uprights. But the ice-water veined freshman stepped in, sized up the kick, then promptly sailed the kick through the uprights with 3 yards to spare, ala Ord’s Kelen Meyer.

With the clock showing just 4 ticks till halftime, Fremont Bergan had upped their lead to 17-7 over an Aquinas team that rarely loses at home.

Aquinas came out on fire after another one of future Hall of Fame Coach Ron Mimick patented halftime speeches and believe me, I’ve heard a few over the years. But the Monarchs were once again bitten by one of Bergan’s squib kickoffs. A bobbled, then fumbled return was recovered by Bergan and the Knights were in business before Aquinas could run a single play in the 3rd quarter.

Bergan had a shot to blow it open, set up at the Knights 39, but 4 plays into the opportunity, defensive back Curtis Humlicek picked off a Koa McIntyre pass to end the short drive.

Now Aquinas had it back, but you guessed it, disaster once again struck when the Monarchs, facing a 4th and 1 at their own 29, decided they had better punt it away. No dice. The snap sailed far over Kyle Napier’s head, the senior had to then just fall on the ball and Fremont Bergan had a gift possession at the Aquinas 6 yard line.

Tony Smith’s Aquinas defense held Bergan to a 4th and goal at the three, but the gifted McIntyre scooted in to score a touchdown standing up from three yards out, giving the Knights a commanding 24-7 lead three minutes deep into the 3rd stanza.

The Monarchs once again fumbled the squib kickoff, but this time recovered the fumble, then proceeded to fashion their best drive of the night, with Kyle Napier, big Michael Andel and Curtis Humlicek chewing up yardage all the way from the Aquinas 31 to the Bergan 12 yard line. But the Knights stiffened, forcing a 29 yard field goal attempt by Brian Cech that was doomed from the snap.

Bergan then applied the death punch after taking over on their own 20 following the missed Cech field goal. Hard running Chris Pinales ripped off runs of 10, 8 and 3 yards around his left side. It was then Koa McIntyre for gaines of 4 and 7, then Pinales for 10 more.

The Knights were now on at the Monarch 7 yard line. A face mask infraction moved it to the 3. Then a series of illegal shift penalties by Bergan eventually landed them back at the Aquinas 13, but more importantly, precious time ran off the clock each time Koa McIntyre waited for the play call.

Finally, facing a 4th and goal at the 13, Bergan finally got the play called in on time and it was then time for the brothers McIntyre to hook up for a 13 yard touchdown strike. Sophomore Kade McIntyre, who could not have been anymore well covered, managed to reel in the 13 yarder, giving Bergan a 31-7 lead with 6:48 left in the game.

Aquinas would have two more possessions to put some points on the board, but the fired up Knights defense was just too much, turning the Knights away both times.

The Archbishop Bergan ground attack was paced by junior Chris Pinales, who rushed for 93 yards on 17 carries and a touchdown. Koa McIntyre, who ran for 31 yards and a score, completed 10 of 22 passes for 162 yards and a pair of touchdowns.

Fremont Bergan improves to 6-0 for the year and will return home to face winless Tekamah-Herman next Friday, while Aquinas will have a date with in town rival David City High next Friday.