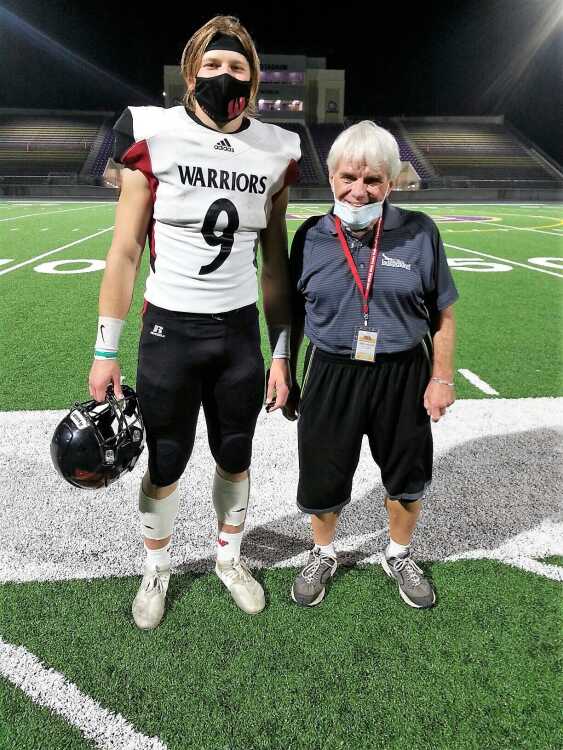 And the Omaha Westside defense? All they did was hold Grand Island to 146 yards of total offense with the goose egg on the scoreboard.

And…….all of these stats against Grand Island came in the opening half when the Warriors built a 42-0 lead, which rested the starting offense for the entire 2nd half.

*Bryson Schultz, Connor Hausman, James Carnie-Norris - Well, it appears Class B’s number 2 rated Norris football team has just gained another weapon that should open up their already potent offense. 190 pound RB Bryson Schultz, who has been rehabilitating from a weightlifting injury suffered 10 months ago, made his return known immediately in the Titans 35-7 win over Beatrice.

Schultz outran the Orangemen defense to haul in a miracle 68 yard touchdown toss from QB Connor Hauseman, who somehow managed to get the pass off on his way to the ground. Bryson also scored on a 5 yard option pitch from Hausman.

Hausman, who seemed to be “in the zone” against the Orangemen, completed 10-14 passes for 251 yards and those three TDs.

*Creighton Prep Miracle Comeback - *See the amazing details at the conclusion of this article. It is the biggest comeback in Prep’s storied history*

*Matthew Schuster, Logan Sobota-Ashland-Greenwood - Schuster, the senior transfer from Cozad, was huge in the late going during Ashland-Greenwood’s 21-6 victory over undefeated Raymond Central. Schuster, who had scored on a 12 yard run right before halftime, broke loose for 135 second half yards and iced the game with his 21 yard scoring dash with 3:52 left in the 4th. That gives the senior, who is son of former Nebraska great Brian Schuster, 635 rushing yards and 8 TDs through five games.

Logan Sobota, a 5-11, 170 pound sophomore linebacker, had 10 tackles, 2 sacks and a blocked field goal in the Raymond game. The hard-hitting Sobota has registered 10 tackles in each of the Bluejays last three ball games and is leading tackler on the team with 42 stops (18 solos) this season.

*Edgar Rodriquez-West Point-Beemer - I wonder if Columbus Scotus had any idea Edgar Rodriquez would have a big rushing just one week after Battle Creek’s Reece Bode went off for 266 against them? I’m thinking not. Well, Edgar Rodriquez did it some better by exploding for 305 yards on 26 carries and 4 touchdowns covering 11, 60, 30, 36 yards in the Cadets 53-27 win over the Shamrocks. That increased Edgar Rodriquez 2020 rushing total to 648 yards on a sparse 63 carries (12/per game).

West Point-Beemer sports a 3-2 record after 5 outings, with losses coming to toughies Battle Creek and Wayne.

Carson Watts, the Bulldog’s punishing runner, added 130 yards on 15 totes with TD runs of 34 and 23 yards. Watts, who is a also terror on defense, can flat out hurt you when he’s carrying a football, and seemingly never runs out of gas. And the scary thing is that Reed and Watts are not the best football players on this Osceola football team.

That honor goes to returning All-State TE/DE Kyle Sterup, who may catch a pass or two every game, but more importantly administers a ton of pancake blocks and makes a gazillion tackles on defense. Do Not call this guy a name and run. Was definitely the defensive star of Osceola/High Plains state championship game a year ago,

Dilan Krause added 80 yards on 13 totes with scoring runs of 23 and 15 yards. Ballard, by the way, nearly bettered his top rushing output of 2020 by nearly a hundred yards in the win. Joey Falk, one of Class A’s finest players at the safety position, also got into the scoring parade by returning a fumble 74 yards for a touchdown.

Falk, Trevor Winterstein and Guy Hunt also had interceptions in the contest, picking off passes from Papios Freshman QB, Octavian Pyrtle. Winterstein, who also had 60 yards rushing on 4 carries, plus 9 tackles on defense, added a 12 yard touchdown late in the 3rd quarter. The Winterstein score gave the Storm a little breathing room at the time (28-17).

*Alex Prim, Jackson Clausen-Norfolk Catholic - Clausen set the tone for the Knights 38-20 win over Ponca last Thursday night by returning the opening kickoff 78 yards for a touchdown. Clausen would later add scoring runs of 2 and 65 yards.

The golden toe (and leg) of kicker Alex Prim kept the Knights scoring going and pinned Ponca back on six of their 7 offensive possessions. Prim, a starting linebacker Nebraska High School Sports Hall of Fame Coach Jeff Bellar, booted 6 of his 7 kickoffs into the end zone for touchbacks, kicked 5 PATs, and knocked down a 41 yard field goal in the Norfolk Catholic win.

Blevins, a senior, now has 425 yards this season for 4-1 Weeping Water after rushing for 877 yards a year ago.

*Cody Marcus, Drew Lewandowski, Ty Calleroz-Arcadia/Loup City - Quarterback Cody Marcus hooked up with Drew Lewandowski for a pair of touchdown passes in the resurgent Rebels 46-18 victory over Ravenna. Lewandowski had touchdown receptions of 6 and 58 yards from Marcus, while RB Ty Calleroz gained 85 yards on 21 attempts and powered his way for short TD bursts of 2, 3 and 2 yards.

*Kale Jensen-Central City - It doesn’t get much better than Central City’s Kale Jensen when it comes to passing yardage in this state. Columbus Lakeview found that out when Jensen tore up the Vikings by hitting 25 of 33 for 346 yards and 5 TDS in the Bison’s 57-8 win. The 6-0, 185 pound JUNIOR also ran for 87 yards on 14 carries and another touchdown in the Bison win.

Unofficially, Kale has completed 150 of his 215 passes for 1,747 yards and 20 TDs this season in just 5 games. You are probably asking yourself “Is that all Central City does is pass the football?” The answer? Pretty much. I have not seen the Bison line up in anything but an empty backfield with 5 wide-outs. If there is a run, Jensen does the honors or a flanker will carry on a jet sweep. Thats it.

I can see this football team being a nightmare for any opposing defensive coordinator because you have to be on edge the entire game with Central City’s ability to strike from anywhere on the field at any given time. The team is just NEVER out of a football game until the final gun sounds and remember their only losses are to Ord and Battle Creek.

If you haven’t seen Troy Huebert’s Central City team play this year, it would be worth the drive just to watch this aerial show, especially if the Bison are playing at home at Preferred Popcorn Field, one of Nebraska high school’s finest facilities.

*Creighton Prep Miracle Comeback - How, in the name of Tom Jaworski, do you come back from a 26-0 deficit to Millard West with just 9 minutes 40 seconds remaining in the 4th quarter? I’ll bet Millard West would like to know because it’s the biggest comeback in Prep’s long and decorated gridiron history.

Here is how the miracle unfolded at Omaha Westside’s Phelps Field, where Prep ironically plays their home football games this year. (Considering the fact Prep and Westside are longtime and sometimes bitter rivals).

These are the Creighton Prep scoring plays and the location to begin those drives. One of the plays is a defensive touchdown, another a turnover, so those Millard West drive location origins will be noted……