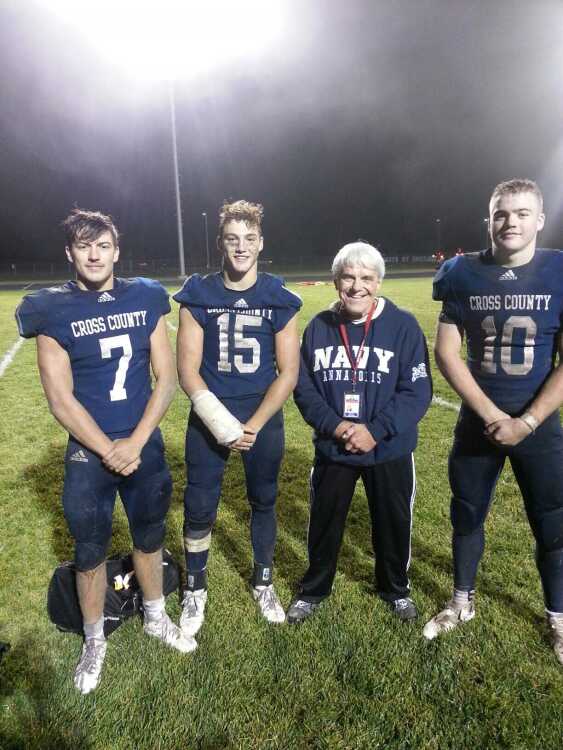 Cross County head coach Hayden DeLano was probably if his offense was going to get more than pair of possessions in the first half against Howells-Dodge Friday night.

Class D-1’s No. 1 rated Cougars (Lincoln Journal-Star) had the football for a grand total of two minutes, 53 seconds in the opening quarter and didn’t get the ball back in the 2nd quarter until about 6 minutes left before halftime.

But a pair of long touchdown runs by Carter Seim (32 yards) and Isaac Noyd (62 yards) in the second quarter, gave the quick strike Cougar offense a 12-0 halftime lead, enroute to an impressive 28-0 win over legendary coach Mike Spiers and his #3 rated Howells-Dodge Jaguars.

Howells-Dodge, who starts 2 senior, 2 juniors and 4 sophomores on offense, controlled the time of possession in this contest, holding on to the pigskin 33:32 compared to Cross County’s 15:22.

But there used to be a category on my old report cards back my grade schools days that read; “Profitable Use of Time”, and Hayden DeLano’s offense certainly earned an A+ in that category on this foggy night, putting up 4 touchdowns in that fifteen minutes plus while holding the Jags offense to a big goose egg on the scoreboard.

Once again, the high powered, quick-striking Cross County offense was fueled by twin 1000 yard rushers, Isaac Noyd and Carter Seim, especially the speedy Noyd. Seim, who has already rushed for an unofficial 713 yards in 4 games this season, broke the scoreless deadlock when he swept around the left side for a 32 yard touchdown run with 5:28 left in the 2nd quarter.

Four minutes and 50 seconds later, the 160 pound Noyd sliced off the left A-gap and raced untouched for a sparkling 62 yard scoring jaunt. Isaac’s touchdown sprint put the Cougars up 12-0 with just :38.8 left before the halftime break.

It didn’t take long for Cross County to cash in on a pair of nifty runs by the Touchdown Twins to open the 3rd quarter. Starting from their own 9 yard line, Seim gained three yards, then it was once again Isaac Noyd off to the races. But Noyd’s long gainer was nullified by a holding call and the Cougars were strapped with a 2nd and 12 at their own 7 after the run was called back and the penalty yards were accessed.

Not a problem. Carter Seim then ripped off a 36 yard run to the Howells-Dodge 37, then three plays later it was Isaac Noyd breaking free for his 2nd long scoring jaunt of the evening, this one coming from 33 yards away,

The Cross County defense, which gained momentum as the night rolled along, forced a Howells-Dodge punt on the ensuing possession, but Jags sophomore Braiden Magnum got off another booming punt, pinning Cross Count back on their own 7 yard line. A block in the back on the punt return didn’t help matters either

Anyway, no sweat. Carter Seim chewed up 18 yards to the Cougars 25 yard line on first down, then it was senior blazer Isaac Noyd breaking free for his third long distance scoring run of the night, a sweet 55 yard sprint down the Cross County sideline.

Seim added his second straight two point conversion, and the Cougars had a 28-0 lead with 6:04 remaining in the 3rd stanza.

Howells-Dodge would threaten one more time in this game, something you just knew they would do. Aided by a late hit out-of-bounds personal foul infraction and a Jacob Tomcak to Blake Sindelar 17 yard pass hook-up, the Jaguars drove all the way to the Cougars 1 yard line before Levi Bellina was stuffed on a 4th and goal from the one to preserve the shutout.

Levi Belina was the workhorse for Howells-Dodge, rambling for 96 yards on 29 carries, giving the junior 1000 yard rusher 346 yards after three games. Jags Quarterback Jacob Tomcak completed 9 of 15 passes for 102 yards tonight, which is big news for a Mike Spiers football team.

The legendary Spiers, who built a state championship DYNASTY back at the turn of the century, won 8 State Championships in a 10 year stretch, spanning from the year 2000 to 2010. And Howells-Dodge did that RUNNING the football.

During one of those championship runs, Spiers’ Howells team threw only THIRTY THREE passes the ENTIRE SEASON, with a bunch coming in the state title game. So, 15 passes on this foggy night IS a BIG DEAL on a Mike Spiers football squad, even in 2020.

Next Friday, Cross County (4-0) will travel to Central City to meet Nebraska Christian before having a Bye week September 25th. Meanwhile, Howells-Dodge returns home next Friday to face a winless Wisner-Pilger team.