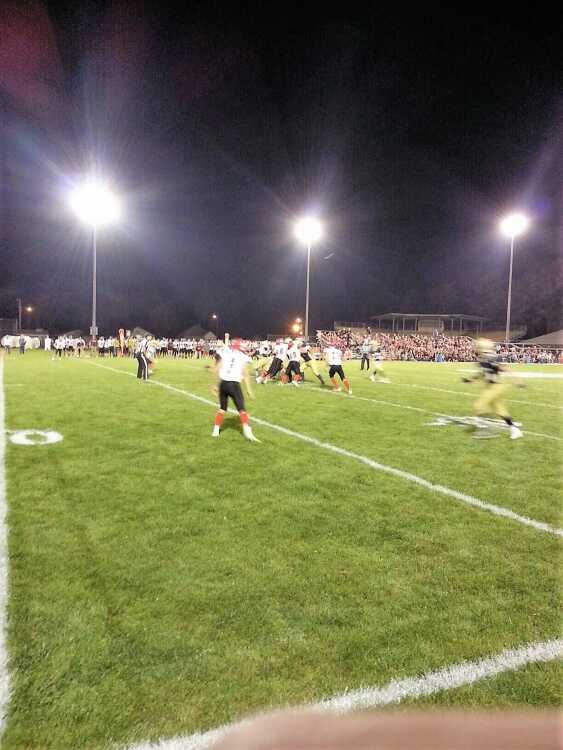 *Kale Bird, Tyler LeClair, Cayden Bluhm-Bennington - Trio made life tough for GI Northwest on opening night 2020. When all the smoke cleared at Viking Field northwest of Grand Island, Bennington had pulled off a 54-31 win over the Class B pre-season rated #6 Vikings.

The Badgers, rated #7 coming into the game, were paced by QB Kale Bird’s aerial show that included completing 11 of 21 passes for a monster 320 yards and a trio of TD tosses. Bird also ran the ball 14 times for 47 yards which included TD runs of 1 and 3 yards.

*Koa McIntyre-Fremont Bergan - Speedy 6-0, 190 pound junior quarterback had a huge night in the Knights impressive 41-13 win over Class C-2 rated Yutan. McIntyre rushed for 167 yards on 17 carries with a pair of touchdowns and completed 10 of 20 passes for 95 yards and three more scores in the contest.

The multi-talented McIntyre also made 3 solo stops on defense and picked off a Yutan pass for good measure.

In the Warrior’s season 40-0 dominating win over pre-season #6 Columbus Scotus, Ludvig bolted for 220 yards on 28 carries and TD runs of 14, 3 yards. QB Tate Nelson, who completed 8 of 10 passes for 79 yards and a 30 yard TD toss to Cooper Hancock, added 74 rushing yards on 7 carries and a pair of scoring runs covering 40 and 2 yards.

**Brodey Johnson, Ethan Mullally-North Bend Central - Quarterback Johnson (6-1, 185, Junior) stepped into the starting North Bend QB role by hitting 20-25 passes for 230 yards and a touchdown in the Tigers 37-13 win over Fort Calhoun. Tough running Ethan Mullally, a 1000 yard rusher in 2019, continued his torrid rushing pace by gaining 128 yards on 25 carries with 2 touchdowns in the win.

*Jack Kildow-Bayard - In a nail biting 26-20 win over the Morrill Lions, quarterback Kildow completed 16 of 31 passes for 207 yards and 4 TDs (all the scores). Senior Trevor Reish caught 6 Kildow passes for 106 yards and a pair of TDs, 5-11, 175 pound senior Christian Leonard grabbed 3 aerials for 58 yards and a score and sophomore Trent Marquez had 6 catches for 43 yards and the remaining touchdown.

*Eli Larsen, Tommy Wroblewski-St. Paul - All-State RB Larson rushed for 152 yards on 24 totes and touchdown runs of 26 and 6 yards in the Wildcats opening game loss to Pierce. The lightning fast Larson also returned a Pierce kickoff 96 yards for his third touchdown of the night.

*Nolan Wetovick-Cozad - Versatile junior QB rushed 17 times for 128 yards and a pair of touchdowns and completed 8 of 10 throws for 107 yards which included an 18 yard scoring toss to senior Jacob Engel, in Cozad’s opening night victory (35-7) over bitter rival Gothenburg.

Quinston Larsen-Grand Island Heartland Lutheran - Arguably Six-Man football’s top player for 2020, Larsen lived up to his tag by scoring SIX touchdowns in the 1ST QUARTER in the Red Hornets 63-32 win over Elba.

Larsen, who not only rushed for over a 1000 yards a year ago, but also amassed over a thousand receiving yards, a rare occurrence at any level of football.

Larsen, who played for Red Cloud as a freshman and sophomore, ran for touchdowns covering 6, 46, 2 and 9 yards in the 1st stanza. He also caught a 38 yard scoring pass and retuned a punt 69 yards for another TD before the opening quarter was in the books. And you realize they only play 10 minute quarters in Nebraska 6-Man football games.

Quinston added a 7th score in the 2nd quarter when he returned a fumble 42 yards for a touchdown, then notched his 8th of the afternoon on an 18 yard run in the 3rd.

So, the final stats saw Larson rush for 119 yards on just 7 touches with 5 TDs, catch 2 passes for 66 yards and a score and hit the endzone on defense and special teams as well.

The 5-9, 145 pound Diessner ran 31 times for 265 yards and FIVE touchdowns, completed 4 of 8 passes for 138 yards and two scores, caught one pass for 8 yards, made 14 tackles on defense with 11 solo stops, caused a fumble, made an interception and blocked a field goal in the game. No, Diessner didn’t drive the bus home only because the game was in Spalding

Ollendick completed 13 of 18 passes for 194 yards and 4 TDs, rushed 12 times for 85 yards and 2 TDs (1,5 runs) and just simply looked in control the entire way while leading his team to a big halftime advantage.

Adam Miller was on the receiving end of three Ollendick scoring strikes which covered 20, 14 and 13 yards. Maye Decker made the other touchdown catch of 25 yards.

**Logan Wiedel, Dominic Stewart-Thayer Central - Running back Stewart (5-6, 160, Sr.) and QB Wiedel combined to make it a long evening for Shelby/Rising City as the Titans outscored the Huskies 58-46.

Wiedel’s favorite pass target in the win was Trey Fischer, who caught three passes with two going for touchdowns (65, 63 yards). Andrew Heinrichs had 2 catches for 58 yards and a TD (10 yards).

*Caleb Busch, Barak Birch-Burwell - Busch ran for 137 yards on 14 carries and 3 touchdowns in the Longhorns 50-15 victory over Atkinson West Holt. Quarterback Barak Birch completed 7 of 9 passes for 76 yards and 2 scores to make life tough on the Huskies in the 2020 curtain raiser.