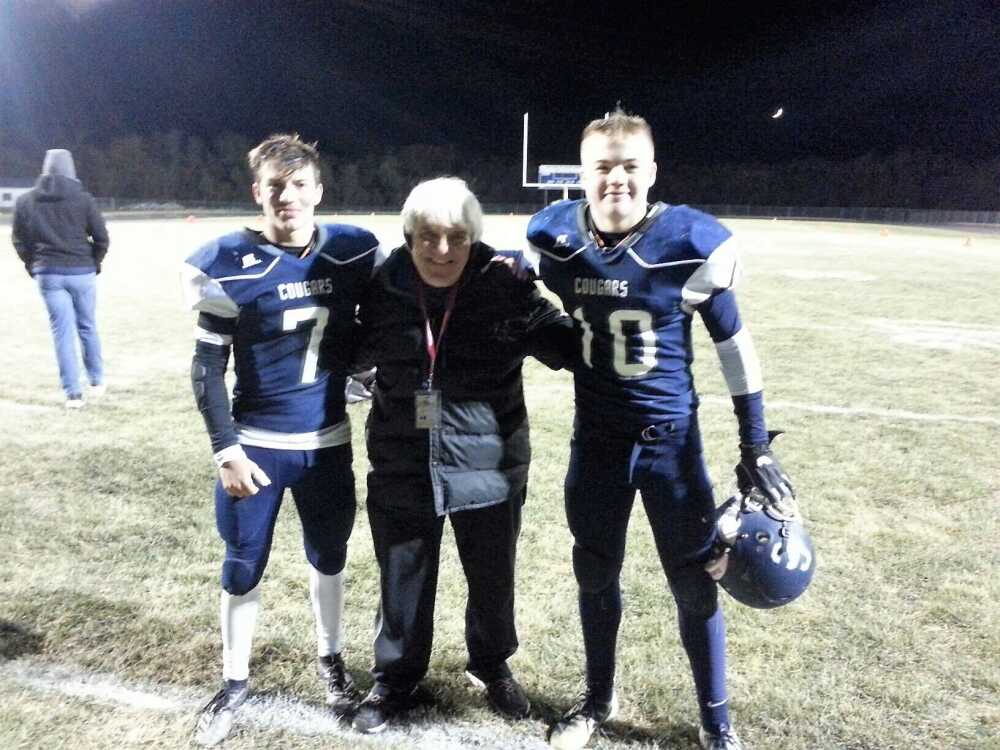 *Isaac Noyd-Cross County - 1,514, Sr. - Here is a guy that ran for over 1,500 yards last season and didn’t even tip the scales at 150 pounds. Playing with the heart of a lion and showing up to the game with an attitude, Isaac Noyd carried the load for Cross County the first part of the season.

Sophomore Carter Seim then emerged and Cross County had a lethal 1-2 punch in that Cougar backfield. Noyd’s numbers continued to build despite the backfield help and was always a continued threat to break the long distance touchdown strike with his blinding speed and quick, shifty moves.

Isaac is now up to 155 pounds and will be an even be bigger running threat out of that loaded Cross County backfield. Noyd can also slip out of that same backfield and catch some passes and when placed in the situation, is one of 8-Man football’s most lethal kick return men.

On defense, Noyd had 62 stops from his cornerback position and 40 of those were solo stops, which indicates two things; 1). Not many people are going to blow past Isaac Noyd and 2). Mr. Noyd knows how to tackle.

*Carter Seim-Cross County - 1,293, Jr. - This young man absolutely exploded on the scene for super coach Hayden DeLano last season. A 2019 summertime injury prevented Carter Seim from playing the first three games for Cross County, but the 6-0, 185 pound dynamo made up for lost ground with his 1,293 rushing yards and 86 tackles the remaining 9 games.

Seim did not look, nor play like a sophomore last season and it makes my head spin thinking of how this kid will perform in 2020. One reason for those dizzying thoughts is that diversified offense Coach DeLano runs. Carter Seim can line up at a number of slots in that Cougar offensive look and just kill you if someone doesn’t know his whereabouts on the field on every play.

Seim, like Noyd, has great speed, but his long stepping, 400 meter type stride enables him to pull away from defenders in a hurry. On defense, Seim is an outstanding linebacker with very good instincts and great lateral movement, enabling him to be an All-State candidate on defense as well.

And remember once again, Carter Seim is just a JUNIOR.

Even more amazing is the fact Cole Price ran for 1,184 yards for a Papio team that ended the season with a 4-5 record, but what impressed me the most was the young man rushing for a hundred plus yards against every single opponent except Millard North and he still had 83 yards that night.

It’s also always nice to know what a back like Price tips the scales at, but I have a sneaking suspicion he weighs more than then his listed HUDL weight of ZERO pounds since he wrestled in the 152 pound weight class a year ago for the Monarchs.

Speaking of Wrestling, Cole grabbed a third place medal at the State Wrestling Championships in Omaha last fall (47-5 record?) and his physique shows it. That strength was on display last football season as a two-way starter for Papillion LaVista, especially on offense, where he shed tacklers like water off a duck’s back.

Price also displayed terrific initial step speed and the ability to get into the secondary in a hurry, which is a heck of a tribute to a guy who plays both ways in the rugged Metro Conference.

I’ve seen a ton of football over the years and I firmly believe it is very difficult to be fresh on offense in Class A, Metro football if you are also playing defense. It takes a very special player at that level in this state to be able to pull that off without running low on gas in the 4th quarter, but Cole Price does an admirable job of pulling off that double-duty gig.

*Dex Larsen-Blair - 1,329, Sr.** - This 5-11, 200 pound senior will begin chasing his third consecutive 1000 yard rushing season when the Bears kick off the 2020 season August 28th at Plattsmouth. And honestly, the only thing standing in the way of Larsen posting his third 1000 yard rushing campaign would be a COVID shortened 2020 football season. Larsen is that good.

And, here’s why I say that. Dex Larsen is a model of consistency. After running for 1,355 yards and 13 TDs in 11 games for a 7-4 Blair football team as a sophomore, the Bears record dipped to 3-7 last season and Larsen STILL rushed for 1,325 yards and 12 scores.

Folks, Dex Larsen is tough as nails and possesses very deceptive foot speed once he gets that pigskin in his hands. And speaking of hands, Dex is a definite threat to catch a pass out that Bears backfield and those same trusty hands are pretty lethal when it comes to deflecting passes on defense.

Oh….also keep in mind Mr. Larsen is the long snapper on punts and a good one at that.

Dex Larsen was an easy (unanimous) choice for an All-State slot in that Class B backfield in 2019 and it certainly looks like a repeat performance in 2020 to this guy.

*Rashad Madden-Ralston - 1,128, Jr. - After being used primarily as a kick return specialist as a 5-7, 145 freshman, Madden stepped into the featured back slot and became one of Class B’s most electrifying runners despite toiling for a 1-8 football team.

I can tell you Madden didn’t have a ton of help at times last season, but still made things happen for the Rams. One play that just sticks out like a sore thumb came against a fine Omaha Roncalli squad.

With the ball sitting at the Ralston 29 yard line, the amazing Madden was lined up to take a pitch and sweep left, but the pitch was thrown behind him. Rashad had to put on the skids, actually fell down, then was quick enough to get back up, pick up the loose football at the Rams 18, then reverse his field and sprint 82 yards for a touchdown.

Madden was actually credited with a 71 yard TD scamper, but the athleticism displayed by the sophomore on that play was really extraordinary.

Ralston has had some running backs in the past that have rushed for a thousand yards despite taking some frightful beatings, but Madden was too slippery as a sophomore for anyone to get a solid hit on him most of the time.

With any help at all and Rashad up to 5-8, 160 pounds this season, the Rams junior could be looking at an even better year in 2020. After all, if you can rush for 1,128 yards for a 1-8 football team as a 10th grader, things should be looking up the next season as a junior, right?

*Aidan Aldana-Nebraska City Lourdes - 1,104 Jr. - I’m telling you right now, this youngster is a one heck of a football player! Good bloodlines and the whole shootin’ match, Aldana led this Lourdes Central Catholic team in tackles as a FRESHMAN (in 2018). Last season, the kid beefed up to 5-9 and 175 pounds and became the featured back and responded with 1,104 yards and 14 touchdowns while still making 41 stops on defense.

Aiden is around a 4.6 forty guy, maybe :11.4 in the hundred, but his football speed is even better. And I love this young man’s open field running because Aldana has that 400 meter dash, long striding style despite being only 5-10.

If you like yards after contact, this sophomore was a master at it in 2019, bowling over would-be tacklers like duck pins. The one Aiden Aldana run I will always recall is the power dash from the Lourdes 32 yard line all the way to the Elmwood-Murdock 15. On the way, Aldana nearly touched the ground with his left knee, but balanced himself with his left hand and proceeded downfield. And remember, Elmwood-Murdock was no slouch on defense.

So, stay tuned for the next chapter of Aiden Aldana football, it’s sure to be a good one.