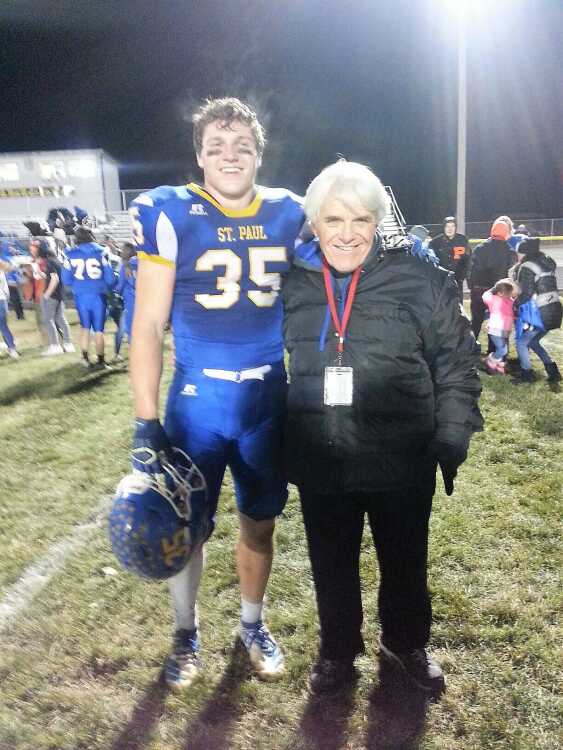 We kick off the 2020 Returning 1000 Yard Rushers series with a mixed bag of greatness, spanning all the way from the Class A, 11-Man football ranks to the wonderful world of small town Nebraska 8-Man football.

*TJ Urban-Millard South - They don’t come much better than Millard South’s TJ Urban when it comes to Dual-Threat Quarterbacks in this state. Maybe it’s just me, but it seems like TJ Urban has been causing defensive coaches sleepless nights for at least the past decade.

And…..throw in the fact TJ’s Dad is former Nebraska Wesleyan Hall of Fame football star, Noland Urban, it’s not difficult to understand how seasoned this young man looks when he plays the q quarterback position for Head Coach Andy Means at Millard South.

The Air Force Academy football program must have been impressed by those stats (and Urban’s obvious smarts) because the Falcons offered a full ride and TJ committed earlier this month. And my opinion? TJ Urban will be a perfect fit for that Air Force run based option offense.

Last season, the now 6-1, 193 pound Urban led his Millard South football team all the way to the Class A semifinals. The Patriots lost to Omaha Westside 31-14, but Urban still managed to rush for 115 yards and a score in that one. The week before, Grand Island had no answer for TJ Urban when the fleet-footed junior rushed for 175 yards and 4 touchdowns in the Patriots 34-24 quarterfinal win.

Urban, who turned in an electronically timed 4.57 forty yard dash this summer, scored a rushing touchdown in every game but one in 2019, highlighted by a spectacular 88 yard scoring dash against Creighton Prep last October 18th.

The dude has remarkable ability to be cruising full speed downfield and suddenly put on the brakes and make a defender look silly as he sails by with a hand full of breeze and it was certainly no more apparent than on that Prep TD scamper when he pulled it off twice.

We will certainly be watching Millard South’s number two in about a month, as the Patriots 1200/1200 man sets his 2020 sights for Memorial Stadium in Lincoln.

*Eli Larson-St. Paul - 2,050, Sr.** - Considering the fact Eli Larsen plays his offensive and defensive positions at an elevated All-State level, is arguably one of the best two-way players in the state of Nebraska, if not thee best.

Last year alone, the jet propelled St. Paul Wildcat ran for 2,050 yards and 31 touchdowns and made 78 tackles on defense, 46 of which were solo stops, and 17.5 of those solo tackles were behind the line of scrimmage. Already a two-time 1000 yard rusher, if Eli Larson gets a full season in 2020, he is a cinch to become Nebraska’s fifty second 5,000 yard career rusher, needing only 1,484 yards to reach that elite status.

On the defensive side, Larson is just plain brutal, striking fear into anyone with a football in their hands, which means the guy could be an All-State selection on either side of the ball in 2020, as he could have been a year ago.

*Tommy McEvoy-Clarkson-Leigh* (6-2, 195) - 1,708, Sr. - Not too many Division One Eight-Man football players walking the streets in small town Nebraska, but Clarkson-Leigh has one in “Touchdown” Tommy McEvoy.

At last check, the Clarkson-Leigh senior-to-be had half a dozen Division II offers, but I’m sure first and foremost on this lad’s mind is getting back on the football field after nearly a two year absence. And if anyone is concerned about Tommy’s long hiatus from the game…….don’t be.

Tommy’s Dad, Bob McEvoy is one of Clarkson-Leigh’s assistant football coaches, sharp cookie, and has spent the last year guiding his talented son through rehab following the torn ACL injury Tommy suffered the summer prior to his junior season.

If there is a silver lining to this picture, it’s the fact Patriot’s head coach Jim Clarkson spent 2019 building a pretty scary Clarkson-Leigh football squad, a playoff team that boasted a final 6-3 record.

On the way, that 2019 Patriots squad averaged 68 points a game the last six regular outings, scoring 96 and 80 points on back to back Fridays in mid-October. Clarkson-Leigh’s only three losses in 2019 came at the hands of D-2 state champion Humphrey St. Francis, D-2 semifinalist Falls City Sacred Heart, and D-1 rival Howells-Dodge, who lost to eventual state D-1 Osceola/High Plains in the Quarterfinals.

So, with an already explosive Clarkson-Leigh backfield returning intact, you add one Tommy McEvoy, who ran for 1,708 yards and 30 TDs in 2018, the result is a frightening thought for all of Class D-1, Eight Man football in 2020.

Frankly, Tommy McEvoy made football look easy as a sophomore, and was simply a no-brainer as far as an All-State selection on for me personally, despite the fact I didn’t even see the lad play in a live setting. So think about how much bigger and stronger this natural athlete is currently at 6-2, 195 pounds, and we haven’t even talked about DEFENSE yet, where he already has 78 career tackles, 3 INTs and a pair of fumble recoveries in just two seasons of competition at Clarkson-Leigh.

So I leave you with this thought. How big is that season home opener for Touchdown Tommy McEvoy and Clarkson-Leigh when Cross County comes to town?

*Cade Wiseman-Sutton - 1,607, Sr.* - The 5-10, 155 pound quarterback was a nightmare for any defense he faced a year ago. Yes, Wiseman only threw an average of three times a game, but it was enough to back defenses up in pass coverage and allow the outstanding runner to do his thing. And Cade Wiseman certainly did just that, and how.

Along the way, Wiseman was racking up his 1,607 rushing yards and 497 passing yards against C-2 powers like North Platte St. Pats, Wilber-Clatonia, Doniphan-Trumbull, Centennial and C-1 Kearney Catholic during the regular season, and Cade didn’t really get warmed up until the playoffs, if you can believe that.

In fact, on his way to Memorial Stadium in Lincoln, Cade Wiseman rushed for 647 yards on just 72 carries (9.0/carry) and 10 touchdowns in just THREE PLAYOFF games. The Mustang junior was also a defensive standout, logging 28 tackles in four playoff games including a staggering TEN solo tackles in the championship loss to Oakland-Craig.

So, what does Coach Steve Ramer have coming back to go with Mr. Wiseman in 2020? Won’t matter because Ramer and his excellent staff simply reload, especially with quality linemen, so expect another huge season for the speedy, gliding and sliding Cade Wiseman, one of Class C-2’s finest.

Nothing fancy about Caden Egr’s running style, but the kid has deceptively good speed, but is more than willing to plow over defenders without leaving his feet.

Egr is tougher than nails from his linebacker position, as witnessed by his 106 career solo tackles. That’s 106 out of 158 TOTAL tackles sports fans. Yep, that means Caden doesn’t need much backup when he closes in for the tackle.

I’m not certain what Erg has surrounding in 2020, but this is the type of football talent that will excel no matter what when Friday Night Lights roll around. Exceptional two-way performer who reminds me a lot of Nebraska walk on Braden Klover of Southern.

Cool as a cucumber operating that high octane, high speed Dundy County/Stratton offense, the handsome Tiger signal caller sped for 1,573 yards rushing and 26 TDs and piled up another 411 yards through the air with an additional 8 scores.

On defense, the 5-10, 150 pound sophomore logged 35 tackles in 2019 and came up with a critical drive killing interception on consecutive weeks against Fullerton and Arcadia/Loup City during the playoffs.

Myers and his backfield buddy, Serbando Diaz, another two-time 1000 yard rusher, are part of a talent-rich Tiger football team under the direction of super-coach Michael Spargo.

Spargo has taken this team to the Quarterfinals in 2018 and the Semis last fall, so we know what to expect when things get rolling in about a month.

Oh, and I nearly forgot to mention this tidbit. You would be wise to expect an even higher rushing total for Quade Myers in 2020. Those boys down in Benkleman know how to block.

*Tommy Stevens-Ord - 1,521, Sr. - The old 1959 Superman TV Show intro stated that the alien Superman was; Faster than a speeding bullet, more powerful than a locomotive, able to leap tall buildings in a single bound, change the course of mighty rivers and bend steel in his bare hands. The the crowd would look upward and state, “It’s a bird, no it’s a plane, No it’s Tommy Stevens of the Ord Chanticleers, I mean SUPERMAN!

Well, Tommy is not faster than a speeding bullet or able to bend steel with his bare hands and probably doesn’t know what the heck a locomotive is, but the 190 pound Ord senior RB/LB is faster than you think and tougher than a one-eared alley cat.

Stevens flashed that deceptive speed a year ago in a playoff loss to Pierce when he returned a kickoff 93 yards for a touchdown. Stevens initially flattened a Pierce defender at the Ord 21 yard line, spun around and ran into his own man at the 25, then squirted out of a pile of humanity and continued downfield 75 yards for the spectacular kick return scoring jaunt.

Tommy’s outstanding upper and lower body strength was also on display on the defensive side of things to the tune of 62 tackles a year ago. Stevens, incidentally is part of an returning Ord linebacking corps (Garrett Kluthe, Zach Smith) that has to be one of the best units in Class C-2.

Look for big things out this young man and the 2020 Ord football team when August 28th rolls around and the Chants embark on a trip through Class C-2, which is definitely new territory for Ord and certainly bad news for all other teams in that class.