Who was the Fastest Nebraska Schoolboy in History? - Part One 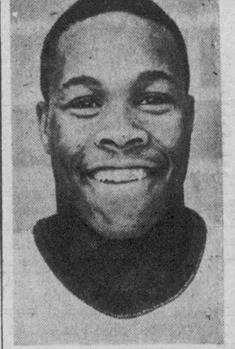 Seems like a simple question doesn’t it? Just go with the fastest electronically recorded 100 Meters time and call it good, right? Not so fast my friend.

Over the years there have been many disagreements about how to go about arriving at who ran the quickest hundred on a track. Seems kind of cut and dried, but there is much more to it than meets the eye if you are not familiar with the sport of Track and Field.

For starters, most high school races around the country were contested in distances measured in yards up until 1979. The next year, in 1980, Nebraska made the switch to the metric system, which created some differences as far as measurements were concerned.

The race we are concerned with here is the 100 yards/meters. This has always been the measuring stick for determining who is the fastest human on the planet. In our case, the fastest Nebraska schoolboy.

The first problem facing record keepers is the fact 100 yards is not the same distance as 100 meters (duh). 100 yards equals only 91.44 meters, so immediately there was a wrench thrown into the works as far as keeping All-Time Records was concerned.

Do you only count races measured in meters for All-Time Records consideration? Not only that, but do you also only consider races that were not only measured in meters, but those which were times electronically timed? So you throw out any 100 yard or hand held times? Of course not.

Many sprint (100 yards/meters) race record keepers simply add .9 to a 100 yard dash time to convert it to meters. But that doesn’t solve the “hand held to electronic time” conversion factor, and there IS a difference considering when a human timer’s thumb hits the button at the start, then hits the finish, as compared to an electronically timed race where the start of the race is connected to the Starter’s gun and the finish is determined by an “electronic eye”.

Now we have a real confusing mess on our hands. Dang meters anyway.

The National Federation of High Schools states THIS concerning converting yards to meters;

“CONVERTING MANUAL TIMES TO FAT: Hand-held times must be rounded up before adding a conversion. The conversion factor of .24 seconds between fully automatic timing (FAT) and manual timing (MT) must be used when conversions are desired (i.e., MT + .24 = FAT).”

There we go! We’re in business, right? Wrong.

At the tail end of all this it also states; “NOTE: This procedure is suggested for seeding purposes ONLY, and should not be ­considered accurate for converting records from English to metric, or vice-versa.”

GREAT. Are we back to square one now?

In my mind, no matter what record keeping method is used, it’s like comparing apples to oranges when pondering whether Tim Thompson’s (Boys Town) hand-held :10.2 hundred time in 2010, or Kenzo Cotton’s 2012 state track, electronically timed :10.403 should determine who is Nebraska’s fastest teenager ever.

Cotton’s time is considered a record (and rightly so) because it was timed at the State track meet and was under the allowable wind speed. That’s fine, but for purposes of paying homage to all the great Nebraska schoolboy sprinters, we will post a list of regular season meet times and a separate listing of times recorded at the state meet.

Both lists will include races measured in 100 yards prior to 1980, then the 100 meter times since then. Following that however, the REAL discussion about who is the fastest ever around these parts, will commence.

**…….also worth mentioning is the “Sprint of the Century” that took place at the Hastings College Invitational on Thursday, April 20, 1961. It was an invitation only 100 Yard Dash that brought together the finest sprinters in Nebraska. The late, great Bobby Williams blazed to an all-time Nebraska best :09.5 seconds in that unforgettable 100.

Never before had four sprinters in the same 100 yard dash finished under ten flat. Just week later Bobby Williams pulled off yet another :09.5 hundred yard dash.

To demonstrate what a pure athlete Bobby Williams was, the day he pulled off the first :09.5 at Hastings College, the dude had to run :10.0 in the prelims, then breeze to a :09.8 in the “semifinals” just to make the finals.

Wait. He also high jumped 5-8, threw the shot 48 feet and pulled off a sensational anchor leg on the 880 relay. In that race, all Bobby Williams could see when he received the baton was the great Tom Millsap’s backside 18 yards dead ahead.

By the time Bobby hit the second curve headed for home, he had passed Millsap and was on his way to anchoring the Links to an 880 relay victory.

*(Paul Phillips :09.7 in 1932 equaled the national interscholastic record at the time, was not allowed-wind aided)

Next time around, we talk about watching close to 50 years worth of State Track Meets and who I would consider to be in the running for Nebraska’s Fastest schoolboy ever.