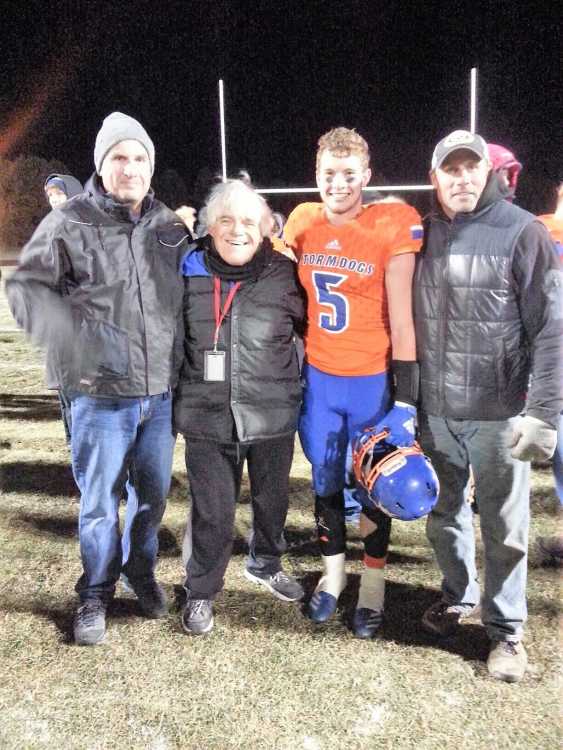 What is the plan of attack when your Osceola/High Plains is down 14-0 to an undefeated Howells-Dodge team after one quarter of play in a “loser goes home” situation?

You ride the legs of your stallion, Keaton Van Housen, who ran for 275 yards and 3 second half touchdowns the week before against defending D-1 champion Creighton.

And ride those legs they did.

The sensational Van Housen, who had 38 yards on 11 carries at the time Howells-Dodge went up 14-0, exploded for 245 big ones after that, including 216 yards and three touchdowns after halftime to lead Osceola/High Plains to a 28-14 win over the unbeaten Jaguars.

It looked like all the cards were finally in place for Mike Spiers Howells-Dodge football team when injured quarterback Darrin Pokorny was finally cleared to play a week ago. Spiers sat Pokorny out in the Jaguars 58-22 win over Lutheran High NE, but it appeared the plan for tonight was to ease Pokorny into the game in the second half.

The way the game began, it appeared the Jags may not need their injured quarterback after all.

With the frigid game time temperatures hovering around the 17 degree wind chill mark and strong south winds swirling, the game plan for both teams, and not by choice, was to grind this baby out with a running attack.

And Howells-Dodge did just that to open the game.

It took only four plays for Levi Belina to break loose for a 42 yard touchdown right down the Jaguar sideline on the Jaguars game opening drive..

Belina, the sleek 5-11, 170 pound sophomore, eclipsed the 1000 yard rushing mark just last week after breaking out in week seven against Laurel-Concord-Coleridge. Since that game, the sophomore sensation had taken off for 663 yards and 16 touchdowns the past four weeks.

Before the first quarter would ome to a close, the smooth, fluid running Belina would accumulate 118 yards on the ground as Howells-Dodge shot out to a 14-0 lead over the home town Stormdogs.

Osceola/High Plains never did contain Belina in the first half as Levi picked 137 yards on 18 totes before break, but the Stormdog defense did the “bend but don’t break” routine very well and prevented the Jags from inflicting any further damage following that 14-0 lead.

Meanwhile, the Osceola/High Plains offense pieced together a long possession that began at their own 30 yard line with 4:20 left in the opening stanza.

The Stormdogs played grind it out football, but had to overcome two illegal procedure penalities and a holding call just to reach the Howells-Dodge 23 yard line. Five plays later Keaton Van Housen used his low pads running style to crash in from the 7 yard line for the Dogs first score of the night.

Van Housen ran in for the two point conversion and the half ended with Howells-Dodge up 14-8.

Levi Belina was injured on a run with 1:18 left before halftime, returned two plays later, but I’m not certain if the Jaguar sophomore runner was 100% after that.

The Stormdogs immediately established control on their opening possession of the 3rd quarter, fashioning a 10 play, 51 yard drive that culminated with a 3 yard Keaton Van Housen touchdown blast.

Keaton again ran in for the double PAT and the Stormdogs had their initial lead of the ballgame, 16-14. They would never relinquish that lead.

Van Housen toted the ball 8 times in that touchdown drive, churning out 34 yards, and the senior’s dominating second half was just getting started.

On Osceola/High Plains next possession, it appeared the Dogs might be on their way to tacking on another score before Van Housen had the ball stripped from his grasp. Jaguar freshman Aandy Dominguez pounced on the football to kill the drive at the Howells-Dodge 18 yard line.

I’ve been to around 20 football games this season and I don’t know if I’ve seen a game with so many attempts by both teams to strip the football from the ball carrier. Every single play it seemed like there was a would be tackler trying to pull the ball out.

The Jags did get a decent drive going, but it eventually fizzled and sophomore RJ Bayer was forced to punt the ball away.

What happened on the ensuing Osceola/High Plains possession may have stung Mike Spiers forces badly.

Starting at their own 30, the Stormdogs, who were now using Van Housen taking the direct snap out of the Wildcat formation, drove he ball all the way to the Jaguar 18. Van Housen was toting the ball on nearly every single play, following the surge of the Stormdog offensive line.

So effective was that surge, it seemed like Van Housen was already to to Howells-Dodge linebackers before anyone had laid a hand on him.

Then it happened. On a 1st and 10 at the Jags 18, Van Housen took the ball right into the heart of the Howells-Dodge defense. It appeared they had Keaton stopped for a no gainer, but suddenly the defense relaxed, Van Housen made a 180 degree spin move, revered his field, and rambled untouched for a dagger like, heart piercing 18 yard touchdown run.

“At that very moment, I closed my eyes and imagined I was back in Polk Nebraska. The year was 1984 and I was seeing a lad named Craig Van Housen bolt for 1,113 yards for those Polk Cubs. Then it was 1986 and a lad named Paul Van Housen was tearing up the turf, on his way to 2,142 yards. Then it was two years later and I was back in Hordville watching one of 8-Man football’s greatest players, Dale Van Housen ripping his way to 2,614 yards for Polk-Hordville in 1989.”

Now it was Osceola/High Plains padding the cushion with a 22-14 lead with 6:34 left in the 4th and money quarter.

Howells-Dodge needed to make a run and Mike Spiers boys responded with Darrin Pokorny running the show at quarterback.

After a fine 21 yard kick return by sophomore Blake Sindelar, the Jags were in business at their own 37 yard line.

The Jaguars drove to the Stromdogs 27 yard line in just two plays before Pokorney bolted through the middle of the line to the Osceola/High Plains 20 before the ball was poked out and recovered by……...you guessed it, Keaton Van Housen at the O/HP 18 yard line.

The very next play Stromdog coach Greg Woods sent in the play that put quarterback Carter Boden under center. The senior signal caller handed the pigskin to Keaton Van Housen, who then charged downfield 59 yards for the backbreaking touchdown with 4:40 showing on the clock and a 28-14 Osceola/High Plains lead looking huge.

Howells-Dodge still had time to score quickly, but fierce pass pressure by the Stormdogs defense rushed Pokorney into unwanted early releases and snuffed out any remaining comeback chances the Jags may have had.

Darrin Pokorney did nearly break a long scoring run on the game’s final play, but the Howells-Dodge senior was brought down at Dogs 7 yard line after a 28 yard scamper.

Van Housen, incidentally, has 1,964 yards with 30 TDs heading into the D-1 semifinals.

Howells-Dodge, who closes the season with a sparkling 10-1 mark, was paced by Levi Belina’s 167 yards on 24 carries and one touchdown.

The Osceola/High Plains win improves their record to 9-2 record and sets up a Class D-1, District 3 rematch with red hot Cross County, who beat Tri-County tonight 36-12. The two schools met on September 27th with Osceola/High Plains coming away with a 52-18 victory, but this Cross County team is far and away different from that day with the emergence of twin thousand yard rushers, Isaac Noyd and Carter Siem.

The game will be played in Clarks (the Stormdogs other home field) next Monday with the daytime temps expected to reach 60 degrees. Kickoff time should be set later Wednesday.