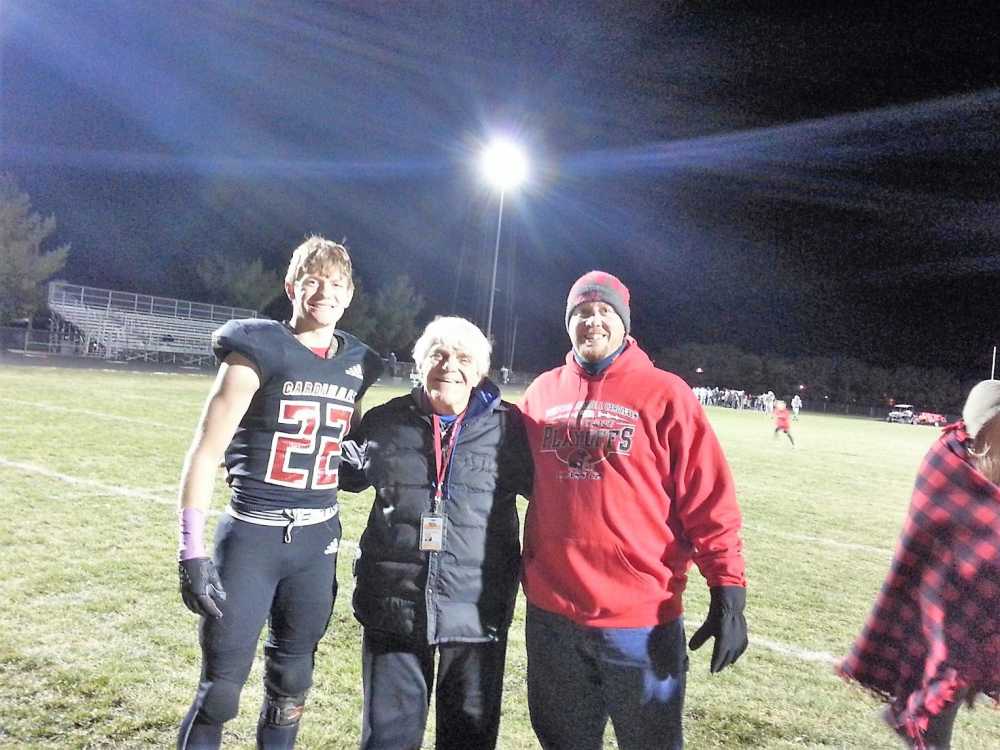 Big Mo. Every prep football team wants it. Once you find Big Mo, you ride it and do everything humanly possible to keep it on your side.

But Big Mo can be a fickle friend and something as simple as a break in the action can cause you to lose it.

After battling to a scorless tie in the first quarter, speedy Cardinal senior Grant Williams not only shot through the Centennial line to block big Carson Prohaska’s punt, but also picked it up on the bounce and carried that baby 29 yards for a touchdown.

Doniphan-Trumbull had Big Mo in it’s grasp and rode that baby all the way to halftime and a 14-0 lead.

While Cardinal defenders like Drake Belville (#32) and #58 Sam Hoppe were holding Centennial 1000 yard rusher Davon Brees at bay, the Doniphan-Trumbull offensive combination Keithan Stafford, a two time 1000 yard runner, and quarterback Griffin Hendricks were doing their job to keep Big Mo on the offensive side.

The first half job completed for a Doniphan-Trumbull team that hadn’t won an opening round playoff game since 2015. This current group of Doniphan-Trumbull seniors had the satisfaction of making the C-2 playoffs the past three seasons, only to see an early first round exit each time.

“Whatever you do Cardinals, come out after halftime and do everything in your power to hold on to Big Mo.”

Things looked promising to Doniphan-Trumbull entering the 2nd half. It was their turn to receive the football to open the 3rd quarter too. Not a problem man. We have this.

Just continue to ride Big Mo by taking that opening 3rd quarter drive all the way down the field to score. In a low scoring affair like this, it could be enough to break Centennial’s spirit for good. Easy enough.

Not so fast. A funny thing happened before that winning Doniphan-Trumbull drive could even materialize. A block in the back at the Cardinals 25 yard line negated a nice kick return by Grant Williams.

Instead of beginning that critical 3rd quarter near mid field, the 15 yard infraction sent D-T back to their own 10 yard line to start the second half.

Centennial was fired up and you could feel Big Mo starting to change sides. I figured Centennial head coach Evan Klanecky was going to get into his young team pretty good at halftime. That’s what championship head coaches do, and Klanecky knew he had to fire up his young Bronco team, who not only lost 19 seniors through graduation, but started four sophomores in the offensive line.

Centennial’s defense pinned Doniphan-Trumbull deep in their own territory and forced punter Keithan Stafford to loft a high kick that ended up on the Centennial 48 yard line.

The Broncos then proceeded to eat up most of the third period, led by the tough running of both Davon Brees and junior quarterback Cooper Gierhan. Brees then capped off the long 12 play drive by slipping if for a 12 yard touchdown run wih 2:14 left in the 3rd.

Cooper Gierhan then sailed the ensuing kickoff into the Doniphan-Trumbull endzone for a touchback and the Cardinals were in a hole once again.

Three offensive plays netted the Cardinals one yard, and Keithan Stafford was back to punt again. The center snap was low, Stafford was rushed, and shanked the punt off the right side of his foot out of bounds at the D-T 32 yard line.

Had Big Mo made the switch?

That question was answered a minute, fourteen seconds into the 4th quarter when Davon Brees walked into the north endzone on a three yard touchdown run. Cooper Gierhan once again booted the point after and Centennial not only had Big Mo on it’s side, but knotted the score at 14 apiece.

Was it going to happen a 4th straight season to these Doniphan-Trumbull seniors? I personally think Keithan Stafford was still feeling the lingering effects of a brutal hit delivered by 6-3, 195 pound Centennial sophomore lineman, Sam Payne back in the late stages of the 2nd quarter.

Stafford had run for 98 yards on 12 carries up to that point, but never had another touch before halftime. In the third quarter, Keithan had three carries for a minus 2 yards. Could the Doniphan-Trumbull star being counted on after Centennial had tied things up at 14 with 10:52 left in the 4th?

With Big Mo clearly on the side of defending C-2 champion Centennial’s side, Doniphan-Trumbull went to work on the ensuing drive that began on the Cardinals 35 yard line.

It was time for Griffin Hendricks to take control and engineer a killer drive, preferably a time consuming one. Now if you recall, Hendricks transferred in to Doniphan-Trumbull the summer before his junior season because his Father, Stan Hendricks took the Superintendents position there, moving in from Yutan.

It just so happens that Yutan won a Class C-2 State football title the year before Stan Hendricks arrived in Doniphan (2017), with a sophomore quarterback at the controls……….named Griffin Hendricks.

It seems Griffen Hendricks might know a thing or two about getting that thing called Big Mo back on your team’s side because it took just Hendricks and the Cardinals just 1:59 seconds to march downfield.

Keithan Stafford carried the ball only once for 3 yards and caught only one pass for a two yards on the drive, so it was Hendricks running and passing that carried Doniphan-Trumbull down to the Centennial 28 yard line.

But Keithan Stafford, the two time 1000 yard man, was lurking in the shadows.

Brent Breckner called the perfect play. Keithan Stafford appeared to be only a pass protector on the play, but slipped out of the backfield, cut across the field west to east and caught a perfect 28 yard touchdown pass from Mr. Hendricks.

BANG! Big Mo was back on the Cardinals side in just that two minute blink of an eye. Would Breckner call for a PAT kick on the extra point? Nope. The Cardinals do not kick extra points. That was a no brainer call.

So, D-T was going for two, and when big 6-5, 240 pound Alex Thomas stood around in the backfield as if doing nothing at the beginning of the PAT try, Centennial left him alone.

That’s when the hulking Thomas slithered out of the Cardinals backfield, cut across the field ala Keithan Stafford, and caught the PAT pass with no defeder in sight.

Now it was Doniphan-Trumbull 22-14, Big Mo was back in Cardinal town and things were looking rosy.

Centennial didn’t give up though. Late in the quarter, the Broncos forced D-T into a 4th and 5 punting situation back on the Cardinals 22 yard line. That’s when big time Keithan Stafford uncorked a 48 yard missile that ended up rolling dead on the Centennial 30 yard line.

The defeding state champions had 2 minutes, 20 seconds left to drive 70 yards, score and add a double PAT to just tie things up.

They almost pulled it off except for one thing. Big Alex Thomas reminded the Broncos that Big Mo was still on his side when he fought through to spill Cooper Gierhan for a 10 yard loss on the Doniphan-Trumbull 30.

The Broncos still advanced the ball to the Cardinals 12 yard line before defensive pass pressure by Doniphan-Trumbull forced Gierhan into a couple of incompletions that sealed the 22-14 win for the Cardinals.

Doniphan-Trumbull put up 317 yards of total offense in the win. Keithan Stafford was a shining star for the Cardinals, rushing for 104 yards on 18 carries and catching six passes for an additional 71 yards and a pair of touchdowns.

QB Griffin Hendricks completed 14 of 30 passes for 132 yards, 2 touchdowns with no interceptions.

Junior headhunter Sam Hoppe led the D-T defense with 16 tackles, 12 of which were solos. Classmate Drake Belville added 8 tackles, all solos in the win. Lineman Hayden Scott had 11 stops in the game (8 solos).

The win advances 7-3 Doniphan-Trumbull into the C-2 quarterfinals and set up a road trip to face unbeaten Oakland-Craig, who squeaked by Hartington Cedar Catholic Friday with a 28-26 win. The game will be next Friday with a kickoff time to be announced.