Cross County clicks on all cylinders to defeat Laurel-Concord-Coleridge 60-26. 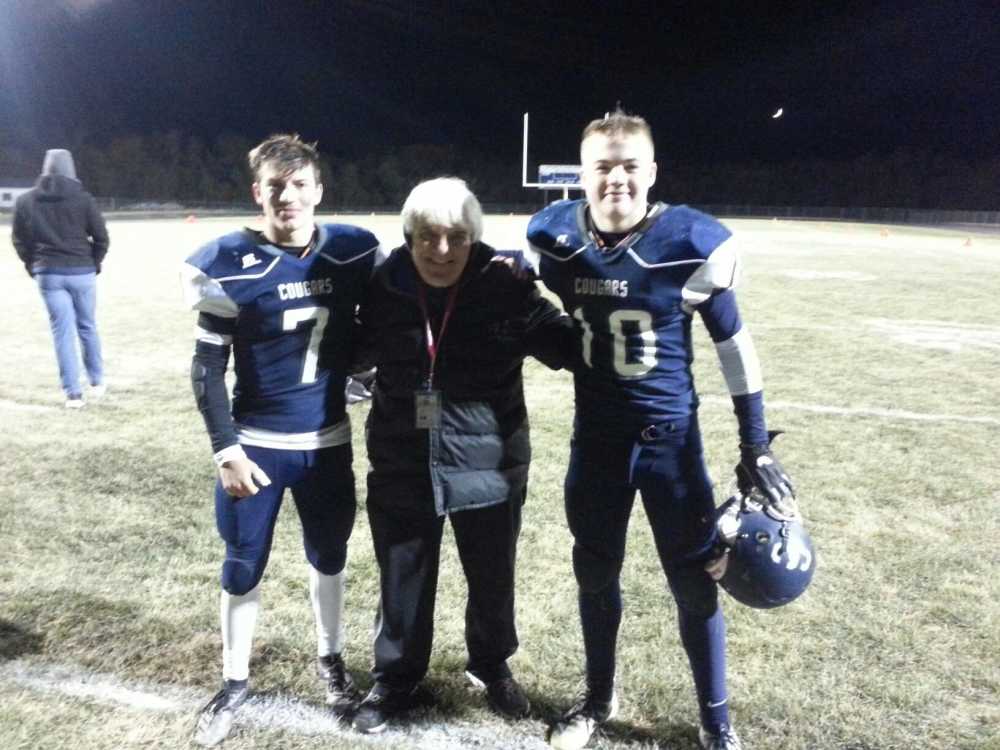 Cross County backs Isaac Noyd (#7/left) and Carter Seim (#10/right) combined for 376 yards rushing in the Cougars 60-26 win over Laurel-Concord-Coleridge in the opening round of the Class D-1 playoffs Thursday night.

The Cross County Cougars turned, what appeared to be one of the best Eight Man football first round matchups, into a Halloween nightmare for visiting Laurel-Concord-Coleridge.

The second half was certainly not a treat for the visiting 5-3 Bears, as Cross County’s dynamic rushing duo of Isaac Noyd and Carter Seim combined for a monstrous 286 yards rushing on just 12 carries and four touchdowns.

Noyd, a 5-9, 145 junior speed merchant, was especially devastating to the Bears in the third and fourth quarters, slicing for 195 yards and a pair of long distance touchdowns on just 5 touches.

Thirty nine yards a carry in the second half by the Cougar 1000 yard rusher had to be a little demoralizing for Laurel-Concord-Coleridge, who were very much in the game at halftime, trailing by only 24-6.

#10 seed Laurel-Concord-Coleridge certainly had that feel of a rare evenly matched pair of quality 8-Man football programs in an opening round.

Cross County, who came in with a 4-4 record and were beaten by teams with a combined record of 32-4, looked even-steven with a Bears squad, whose three losses were to opponents with a combined season mark of 19-4.

I’ve watched over a thousand high school football games in my lifetime and this baby had the markings of a possible overtime frey on paper. Ah yes, but we all know games are not won on paper.

Defenses ruled the contest in the opening quarter. It wasn’t until Cross County’s second possession of the game that the scoreboard moved from double zeros on the Cougars side.

Ironically, in a game that felt like it was going to be Cross County’s ground attack versus the Bears aerial display featuring All-State wide receiver Noah Schutte, it was Cross County that broke the scoring ice with a touchdown pass, and boy was it ever a beauty.

Cougar senior quarterback Cael Lundstrom caught the Bears defense out of position and nailed Carter Seim, who had slipped out of the Cross County backfield unnoticed. So wide open was the 6-0, 185 pound sophomore, he could have slowed up to acknowledge the home crowd on his way to a 39 yard touchdown with 3:10 showing on the clock.

Disaster struck LCC on the ensuing kickoff when a usually 95% sure-handed Noah Schutte coughed up the football fighting for extra yards on the return. An alert Carter Seim pounced on the loose pigskin and Cross County was in business 10 seconds after its initial score of the contest.

It took just half a dozen plays for Isaac Noyd to crash in for his first of three touchdowns on the night. The touchdown, which covered 4 yards, was punctuated by Seim’s two point PAT run, making the score 16-0 with 38 ticks left in the first quarter.

Laurel-Concord-Coleridge had a terrific opportunity to score on the ensuing possession when the great Noah Schutte atoned for his lost fumble by returning the Cougar kickoff 63 yards, all the way to the Cross County 7 yard line.

Two plays later however, Cougar defender Christian Rystom literally ripped the ball out of Schutte’s grasp, saving a touchdown at the one yard line with his timely interception.

The Bears, who never gave up in this game, did later put together a nice drive, culminating with a 5 yard pass from Ty Erwin to Schutte. That cut the Cross County lead to 16-6 with 5:32 left in the second stanza.

Cross County’s final touchdown of the opening half came on a sparkling touchdown grab by Cory Hollinger. The 6-5, 196 pound sophomore simultaneously caught a pass with a Bears defender, but wrestled the ball away from him for a 27 yard touchdown catch.

The Cougars actually had another opportunity to extend their 24-6 lead before halftime, but four straight incomplete passes from Cael Lindstrom to Isaac Noyd prevented that from happening, thanks to some great defensive play by Schutte.

Coach Hayden DeLano’s Cougars came out smoking in the 3rd quarter. In fact, two plays is all it took for the right side of the Cross County O-Line to seal things off and send Isaac Noyd on a 60 yard touchdown journey down the Cougar sidelines.

But once again, the proud LCC forces fought back to answer Noyd’s long TD run with a score of their own. It took only three plays and a pass interference penalty for the Bears to hit the board on a 36 yard scoring strike from Ty Erwin to Noah Schutte.

The scoring play cut the Cross County lead to 32-14, but Isaac Noyd’s 39 yard return on the ensuing kickoff eventually set up a short 2 yard scoring blast by Carter Seim with 8:55 left in the 3rd.

The real knockout punch by Cross County came at the 4:37 mark of the 3rd quarter when Colton Nuttleman stepped in front of a Bears receiver to pirate a Ty Erwin pass, returning it for a pretty 29 yard Pick Six.

Hard charging Landen Berck crashed in for the two point conversion and the Halloween death punch may have been applied, swelling the Cougar lead to 46-14.

But the never-say-die LCC troops bounced right back with another Erwin to Noah Schutte scoring pass connection, this one covering 19 yards.

It was now 46-20 Cross County entering the 4th and money quarter.

Carter Seim added a 25 yard scoring jaunt to begin that 4th quarter, then sizzling Isaac Noyd had ‘em standing in the isles with his splendid 72 yard touchdown gallop that closed out the Cougars Halloween massacre.

Never to give up, Coach Pat Ahrens squad would add one final touchdown to their 2019 scoring log when Ty Erwin tossed his 4th touchdown of the night into the hands of tough running 185 pound sophomore running back Evan Haisch.

Cross County, who advances to the 8-Man One quarterfinals, piled up 407 yards on the ground in the 60-26 win. Isaac Noyd, after beginning the game with zero yards on three carries, exploded for 223 yards on just 14 touches and 3 TDs, increasing his 2019 season total to 1,328 yards and 18 touchdowns.

Sensational sophomore Carter Seim, who was injured in the summer and did not play until Week 3 of this season, added 156 yards on 20 carries and 3 touchdowns, swelling his season total to 742 yards. That is also Seim’s 4th straight hundred yard plus rushing yard performance.

Cougar quarterback Cael Lundstrom completed 4 of 10 passes for 91 yards and a touchdown. Christan Rystrom and Landen Berck led the Cross County defense with 6 tackles each. Rystrom also had a pair of interceptions on the night.

Laurel-Concord-Coleridge, who closes their 2019 season at 5-4, were paced by Noah Schutte’s 11 pass receptions for 133 yards and three TDs. He also had an interception on defense.

Bears quarterback Ty Erwin ended the game completing 18 of 34 aerials for 200 yards and four touchdowns, but did suffer 3 interceptions.

Cross County advances to the D-1 quarterfinals and gains a rematch with BDS, who emerged victorious over West Point Guardian Angels CC 42-20 Thursday night. BDS beat Cross County 34-20 back on October 18th in a game that was tighter than the final score indicates.

The 5-4 Cougars will be on the road for that matchup, which will take place next Wednesday, November 6th. The time and location should be announced Friday.