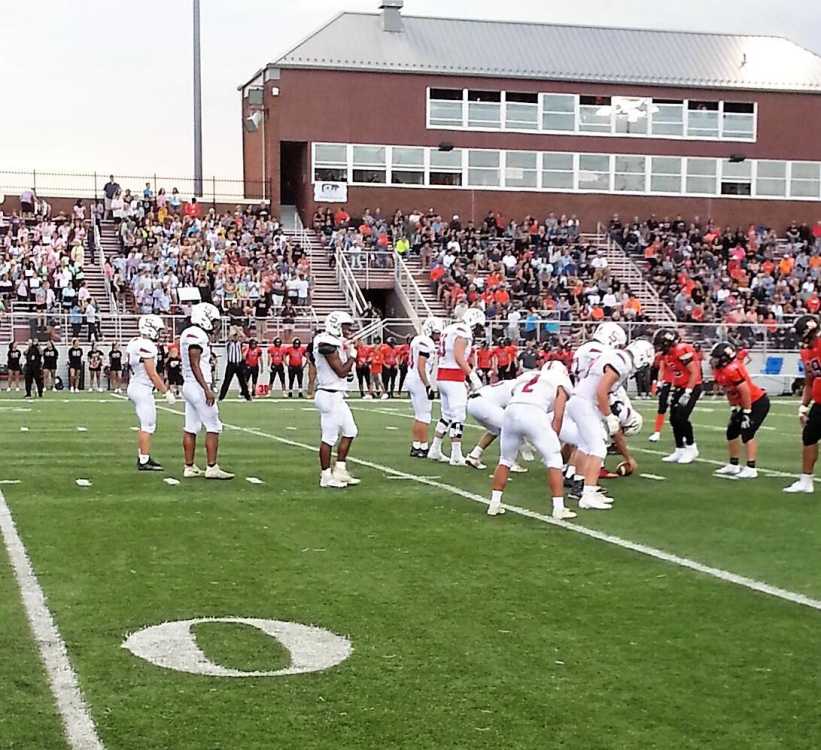 *Jarrett Synek-Hastings - I wonder how many choruses of Hold That Tiger were going through the minds of the Beatrice faithful who attended the Orangemen/Hastings game last week?

Irregardless of the number of times, there was no holding back Tiger quarterback Jarrett Synek, whose 9 touchdown passes broke the State 11-Man record for most TD passes in a single game. Aurora’s Baylor Scheierman connected for 8 TD passes against Kearney Catholic a year ago to set the 11-Man record.

Incidentally, the great Jack Dotzler is still flinging those touchdown passes for Roncalli this season and the possibility exists that Synek and Dotzler could cross paths in the upcoming Class B playoffs.

Back to Jarrett Synek’s big night. The Hastings High field general completed 24 of 37 passes for a staggering 457 yards and those 9 touchdowns. Jarrett’s scoring passes were distributed to a quartet of receivers, two of whom grabbed three apiece.

Carson Shoemaker latched on to 8 of Synek’s aerials, good for 174 yards and 3 TDs. Also catching three TD strikes was Braden Kalvelage, who had 4 receptions for 154 yards. Nate Norby caught 5 passes for 33 yards and and a pair of touchdowns, while Austin Nauert made 5 catches for 71 yards and scored one time.

Some of Synek’s touchdown passes came on short throws and his receivers did the rest, which should strike fear into the hearts of any opponent’s defense.

Maybe that’s why Charlie Shoemaker’s boys are 7-1 with the only loss coming at the hands of the #1 team in the current Class B wild card standings, Scottsbluff.

*Paxton Ross, Deryk Huxoll-Cambridge - It’s pretty safe to say that QB Paxton Ross and WR Deryk Huxoll have worked on their pass and catch routine. But the Man of the Hour in the long awaited Cambridge/Dundy County/Stratton meeting was Paxton Ross.

The 5-11, 180 pound Cambridge Trojan All-State Athlete candidate turned the Eight-Man D-1 Game of the Year into a Trojan dominated contest.

Ross, the senior, completed 14 of 21 passes for 141 yards and two touchdowns, rushed the football 31 times for 147 yards and three more scores, made 8 tackles on defense and unleashed a 59 yard sky rocket of a punt in the 40-22 Cambridge win.

Paxton Ross scored rushing touchdowns covering 2, 3 and 22 yards and hit Ethan McArthur for passing TDs of 37 and 7 yards in a game that saw the Trojans take a 14-0 1st quarter lead and 26-6 halftime advantage over a very solid Dundy County/Stratton squad.

So check this out. 5-11, 175 pound senior Deryk Huxoll scores a touchdown every other time he reels in a pass from Paxton Ross. Last season Huxoll caught 33 passes from Ross for 719 yards and 13 TDs.

Here is another thing to consider when checking out these statistics for Cambridge.The Trojans have played only SIX games this season due to a forfeit win over Southwest.

*Ethan Mullally-North Bend Central - Tigers RB blasted his way to 185 yards on 24 carries and two touchdowns in North Bend’s 16-13 win over Shelby/Rising City. Those yards pushed Ethan Mullally over the 1000 yard rushing mark for the year. 1,066 yards with 12 TDs to be exact.

At the present time North Bend is deadlocked with BRLD and Oakland-Craig for the 3-4-5 spot in those C-2 wild card standings.

Ethan Mullally has really added another dimension to this North Bend football team. With the strong arm of Austin Endorf already in place, Mullally’s emergence as a running back has just made this Tiger offense twice as tough to defend against. And if you think these guys cannot play great defense, check out the 13-0 shutout of perennial power David City Aquinas two week back.

Keep an eye on this North Bend Central team in the C-2 post season.

*Jackson Perrien-Sutton - Another Class C-2 runner eclipses the 1000 yard rushing mark. Jackson Perrien, the Mustang flyer, cruised for 180 yards on just 14 carries in Sutton’s 54-0 route of Superior. Nothing to it, right Jackson?

Perrien, who rushed for 1,172 yards a year ago in 13 games playing quarterback for the Mustangs, has already raced for 1,103 yards in 8 games this Fall, operating from the RB slot.

*Keithan Stafford-Doniphan-Trumbull - Yet another Class C-2 repeat 1000 yarder. The gliding senior RB scorched Hastings St. Cecelia with 210 yards on 18 touches and two touchdowns. That raises Stafford’s 2019 rushing total to 1,085 yards on 108 carries with 11 TDs, and that comes in just 7 games.

During Keithan’s seven games this year, the fleet-of-foot runner who loves to cut back against the grain, has played into the 4th quarter only twice. That speaks volumes.

And, I’m also thinking Mr. Stafford’s 372 total rushing yards versus St. Cecilia the past two seasons has to feel really, really good to him.

Another thing to know about Keithan Stafford is the fact he is a dangerous pass receiver out of that Doniphan-Trumbull backfield. Thirteen receptions for 200 yards and two touchdowns worth of dangerous just this season alone.

*Zach Smith, Tommy Stevens-Ord - The ground attack of Smith and Stevens was back in full operation during the Chants 28-6 win over Valentine. QB Smith rushed for 50 yards on 21 carries and scored on a 26 run in the win.

Smith also completed 9 of his 20 pass attempts for 120 yards and a 30 yard TD strike to Riley Werner, who caught 4 passes total for 59 yards.

*Skeeter Campbell-Broken Bow - In a 54-15 loss to Ord (stay with me here), the 135 pound wide receiver came all the way across the field (running a pass route) to get in front of three Ord defenders, who were in hot pursuit of Mykael Stoddard (I think) who was in the process of going 80 yards for a touchdown.

Skeeter “simply” got in front of the Ord trio, slammed on the brakes and took all three Chanticleer defenders down (including himself) like a row of falling dominos. Most amazing play I’ve seen all season. The actual play is the #1 clip on HUDL’s Longest Nebraska Pass Plays of October 11th.

I posted this on my Twitter page Wednesday afternoon.

*WILLIAM Gatzemeyer-BRLD - A player just cannot come up much bigger than Will did in BRLD’s 42-36 overtime win over Fremont Bergan. The Dual-Threat Supreme quarterback completed 14 of 29 passes for 236 yards (2 TDs) and rushed the ball 32 times for 225 big ones and two more TDs. Gatzemeyer found time to make 7 tackles on defense.

And now for Will’s season statistics to date:

And need I remind anybody that BRLD plays Oakland-Craig this Friday.

*John Coniglio-Creighton Prep - Senior QB was a standout in the Junior Jays 46-23 loss to Millard South. Coniglio, who has thrown for 1,306 yards this season, completed 24 of 42 passes for 204 yards and TD strikes of 19 and 21 yards to Alex Bullock.

Bullock had 10 receptions for 83 yards in the loss. Prep RB Vinny Cacioppo added 84 yards on 18 carries and a 16 yard TD run to contribute to the cause.

*Pierce Utterback-Hitchcock County - 5-8, 165 pound senior back scooted for 128 yards on just 11 carries in Hitchcock’s 48-0 shutout of Arapahoe. Utterback has run for 1,138 yards and 9 TDs in 7 games for the 5-2 Falcons, who close out the regular season facing a powerful Cambridge team.

That is a pretty lofty accomplishment considering the fact Tyson was held to 61 yards on 17 carries in the Blue Devils opening game 18-6 win over a fine Overton team.

This young man can flat out play the game as witnessed by his 519 passing yards (6 TDs) on offense, and his 51 tackles, 3 interceptions and 3 fumble recoveries on the defensive side of the ball.

How valuable is Tyson Denkert to Craig Schnitzler’s Kenesaw team? Oh, I’d say about 1,860 yards of offense worth.

*Clayton Denker-David City High - Win or lose, the Scouts Clayton Denker is always money. In a 33-14 loss to Centennial, the David City star rambled for 161 yards on 22 totes and both scores, raising his 8 game 2019 rushing total to 1,183 yards with 15 TDs.

This young man is one of my favorite running backs in 11-Man football this season. Pure football guy through and through that is ready to play every single week.