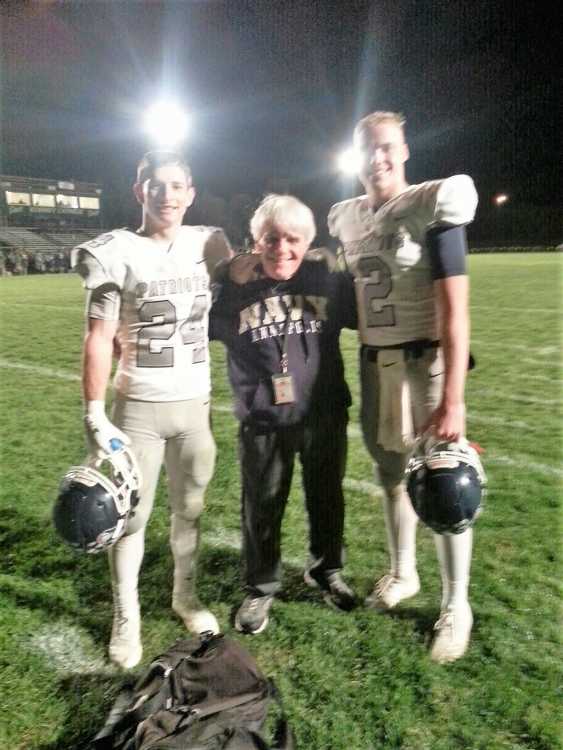 Adams Central QB Evan Johnson (right/#2) broke a pair of Class C-1 passing records in the Patriots 37-14 win over Kearney Catholic Friday night. Pictured on the left is three time 1000 yard rusher Gabe Conant, who ran for 153 yards and 3 TDs in the game.

The poised Adams Central trigger man not only surpassed Scott Frost’s career passing yardage mark of 6,793 in Adams Central’s 37-14 win over Kearney Catholic last Friday night, but the career pass completions record of 486 Johnson soared past was formerly held by Matt Masker…….of Kearney Catholic and Evan pulled it off on the Stars home turf to boot.

Johnson hit 13 of 21 throws for 227 yards with touchdown strikes of 20 yards to Tyler Slechta, a 25 yarder to Leif Spady, and one of 27 yards to RB Gabe Conant.

Give the always improving Gabe Conant some big time props too, as the three time 1000 yard rusher took off for 153 yards on 24 carries and two touchdown runs covering 26 an 4 yards in addition to that 27 yard TD reception.

Conant’s rushing numbers could have been even more impressive if an 84 yard touchdown sprint had not been called back because of a hold. The hard charging Patriot RB now has 1,122 yards in 8 games this season (22 TDs) and 3,467 yards thus far in his career.

So, in 36 career games, Evan Johnson has thrown 883 passes, completed 494 of those for 6,919 yards, 69 TDs (22 INTs). Some may recall that Evan was thrust into the spotlight in Game 1 of his varsity career as freshman

Adams Central starting quarterback Dawson Eckhardt had thrown only two passes when he was knocked out for the season back in 2016. Thrown into the fire as a tall skinny freshman, Johnson responded by completing 12 of 22 passes for 212 yards with 2 touchdown tosses and in a 53-21 loss to…...you guessed it, Kearney Catholic.

There is one more record that I’m aware of that Evan Johnson may have a shot at breaking. That would be Matt Masker’s career touchdown passes mark of 87. Evan is currently at 69 TDs with one regular season game to go and a possible four playoff games if the unbeaten Patriots make it to Lincoln.

*Nick Halleen-Lincoln Southeast - Class A’s leading rusher showed why, when he rambled for 175 yards on 28 carries in the Knights 40-13 win over Papillion LV South. Halleen reached the end zone with runs of 2 and 19 yards while raising his season rushing total to 1,378 yards with 17 touchdowns.

Lincoln Southeast is already assured of a playoff berth, qualifying as the Class A, District One champion. The Knights are currently tied for 2nd in the wild card standings and meet Grand Island in their regular season finale at Seacrest.

*David Lilly-Wahoo Neumann - 6-0, 184 pound Cavalier runner nearly doubled his previous best rushing effort in Neumann’s 35-12 victory over Raymond Central. Lilly exploded for 323 yards on 20 carries and scored all five touchdowns as the Cavs improved to 6-2 on the year.

Isaiah Harris is now at an unofficial 1,178 yards for the season with 19 TDs. The Dual-Threat Urban, who upped his 8 game rushing number to 780 yards with 8 TDs, also increased his passing numbers to read like this; 52 of 97 passes completed for 748 yards and 8 TDs.

Both Harris and Urban were thousand yard runners a year ago for the Patriots, who are currently 5th in the Class A wild card standings, with one regular season game remaining at Omaha Westside for all the marbles in District 5.

*Nick Bohn, Grady Corrigan, Ashten Schmaderer-Bennington - The magnificent Nick Bohn had another spectacular aerial display last Friday evening, this time at the expense of the Blair Bears, 41-18. The gunslinging senior QB hit 24 of his 36 passing attempts for whooping 325 yards and 5 TD passes to 5 different receivers.

Ashten Schmaderer led the Badger pass receivers with 5 catches for 113 yards and a 23 yard scoring reception. Grady Corrigan had half a dozen receptions for 75 yards and a 7 yard touchdown grab. Grady also had a 95 yard Pick Six in the 23 point win.

This young man looks absolutely sensational on film and it appears Bennington will be in the Class B post season, currently lodged at 9th in the wild card standings with one regular season game remaining at tough Elkhorn Mt. Michael.

Big Ben also returned a fumble 40 yards for an additional tally. Jaxson Kant’s other touchdown pass was hauled in by Trysan Scott from 44 yards out.

Lutheran High NE is currently unrated at 5-2 and buried in the middle of the Class D-1 wild card standings and if at full strength, will be very difficult to beat in the post season.

*Bryce Kitrell-Ashland-Greenwood - Kitrell, the Swiss Army Knife of Class C-1, turned in another solid performance for the Bluejays in their 53-13 win over Nebraska City.

The 6-0, 190 pound senor, whom Ashland-Greenwood opponents thought would probably never graduate, carried the ball just five times but still bolted for 168 yards with TD explosions of 37 and 97 yards. He also had a pair of stops on defense.

Ashland-Greenwood can win the Class C-1, District 1 title this Friday with a road victory at Lincoln Lutheran.

Backup QB Grady Gatewood, just a sophomore, entered the game in relief and went 2 for 2 passing with a 28 TD toss to junior Gunnar Ray.

Both Thomsen and Thiele had interceptions in the blowout win and Ian Lundquist recovered a fumble and led the Knights in tackles for the night with seven stops.

It doesn’t get any bigger than Oakland-Craig at BRLD next Friday night to close out the regular season. The Knights are currently rated #2 in Class C-2 behind St. Paul, while BRLD checks in at #3.

*Koa McIntyre, Ethan Villwok-Fremont Bergan - The pair combined for 293 yards rushing and three touchdowns in the Knights heart-crushing 42-36 overtime loss to BRLD. Koa McIntyre, the sophomore who finished 2nd to the great Dylan Kautz in the 100 (:10.9) and 200 (:22.1)at the State Track Meet last May as a freshman, ran for 152 yards on just 4 carries and two touchdowns in the loss.

Ethan Villwok, a 1000 yard rusher last season as a junior, wasn’t far off McIntyre’s pace, gaining 142 yards on 19 touches and a touchdown.

Sophomore Jarret Boggs led the Bergan defense with sixteen tackles. Another sophomore, Cal Janke was next with 14 stops. Villwok also recorded 14 crunches, while yet another sophomore, Alex Painter chipped in 12 more tackles with 2 TFL and one sack.

This Bergan team will make you lose sleep if you have them on your schedule. They are 6-2, out of the C-2 ratings, and buried at #11 in the wild card standings. The Knights close out the regular season with an improved Tekamah-Herman squad and then head to the playoffs to possibly cause headaches for a Doniphan-Trumbull, Aquinas, or North Bend team.

*Quade Myers-Dundy County/Stratton - Sophomore quarterback ran 28 times for 155 yards and a touchdown in Dundy’s 40-22 loss to Cambridge. That vaults Myers over the 1000 yard rushing mark for the second straight season. He now has 1,139 yards (19TDs)

*Tevin Godwin, Logan Page-Lincoln Parkview Christian - QB Godwin completed 18 of 39 passes for 271 yards and 3 touchdowns in Parkview’s 98-70 loss to Diller-Odell. Logan Page was on the receiving end of 13 of Godwin’s 18 completions, compiling 251 yards and all three touchdown catches.

Daylin Craw rushed the football only 6 times, but managed 102 yards and TD runs of 13, 73, and 73 yards for 2-5 Diller-Odell, whose team is right on the cutoff line for making the Class D-2 post season.

The Griffins could use a win over another 2-5 team, Meridian this Thursday to have that shot at the playoffs.