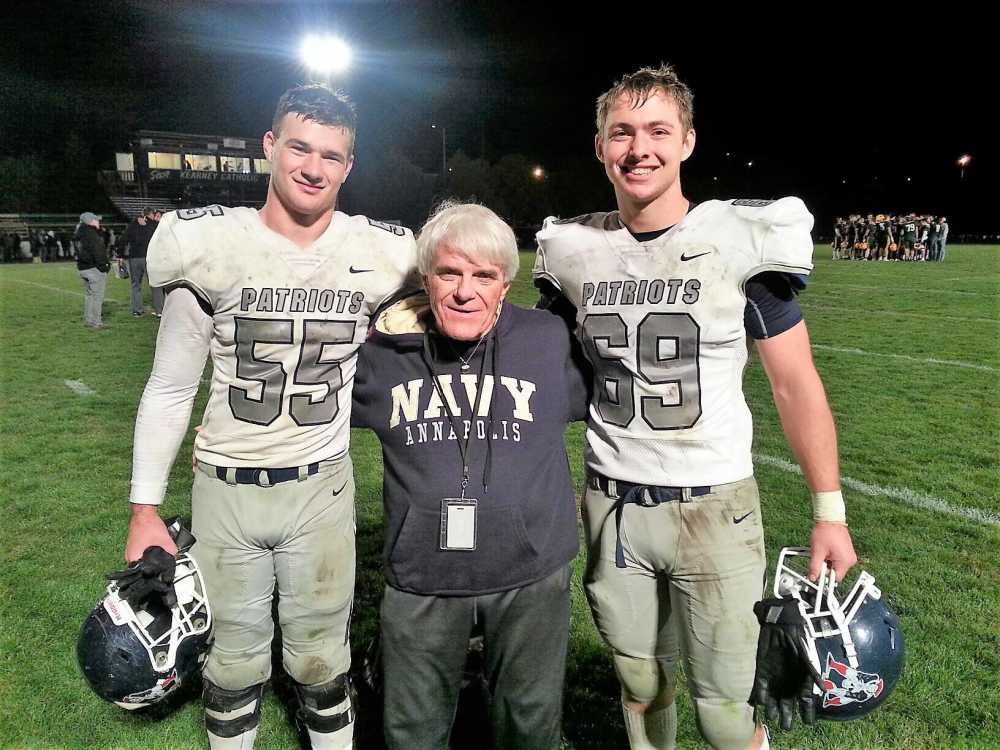 It’s beginning to appear there may be more than one reason the name Adams Central is listed at the top of the NSAA’s Class C-1 Football Wildcard Schedules and Points listings.

The fact Adams Central is listed first alphabetically literally means nothing when it comes to performance on the gridiron, but when the Patriots dominated Kearney Catholic 37-14 Friday night, that name atop the C-1 listings certainly looks like it takes on a different meaning

Adams Central took control from the get-go in this game, splendid quarterback Evan Johnson made sure he eclipsed the pair of Class C-1 records he was chasing before the rains came, and a strong Kearney Catholic team became the Patriots fourth C-1, Top 10 victim of the 2019 season.

Coach Shawn Mulligan’s A/C powerhouse left no doubt who was in command from the opening drive of the game, right through the 80 minute lightning delay, to the closing gun of this C-1 powers battle.

It took exactly 11 plays and three minutes, fifty six seconds on the opening drive of the game, for Adams Central to show who was boss on this night. Quarterback Evan Johnson found Tyler Slechta (son of A/C assistant basketball coach Tough Tommy Slechta) in the right flat for a 20 yard scoring strike and the offensive dominance was set in motion.

If you thought that was good, it took only two plays and 36 seconds after the ensuing kickoff for that smothering Patriot defense to establish it’s dominance. Another basketball coaches son (Head man Zac Foster) Cam Foster, picked off a Kearney Catholic pass at the Stars 31, returned the pick to the KC 20 yard line and the Patriots were ready to score again. It was just Kearney Catholic’s 2nd play from scrimmage

One scrimmage play is all it took for All-State quarterback candidate Evan Johnson to nail another All-State candidate, Leif Spady with a 25 yard touchdown pass. The agile Spady pulled off a little “Dancing with the Stars” move to juke his defender, then waltzed his way 25 yards into the end zone, putting Adams Central up 14-0.

Things didn’t get any easier for Kearney Catholic on their next drive, as those exceptional Patriot defensive line bookends, #55 Sam Hemberger (6-2, 205, Jr.) and #69 Max Grandstrom (6-3, 215, Sr,) kept Kearney Catholic’s start QB Heinrich Haarberg on the run.

The two defensive ends either forced Haarberg into quick throws, batted away passes or recorded sacks, not only on that drive, but all evening, to thwart Kearney Catholic offensive drives.

It was on Adams Central’s third drive of the game that QB Evan Johnson etched his name into the Class C-1 record books at somewhere around the one minute mark of the first quarter. In fact, the 4-year starter slayed two dragons at once when he completed a 19 yard pass to senior wide receiver Micah Gengenbach.

And if I may say so myself, it couldn’t happen to a finer young man, on and off the field, like Evan. I can attest to that statement. What a great kid.

A little more than a minute later following Johnson’s records, Tyler Slechta came on to boot a 27 yard field goal, giving that Patriots a 17-0 lead, just 48 seconds into the 2nd quarter.

Kearney Catholic did score before the half, but a controversial roughing the kicker (punter) call on the Patriots inside the 5 yard line on a 4th and 16 situation, kept the drive alive.

Give the Stars credit though, Heinrich Haarberg directed a beautiful, excellent time management, 69 yard drive downfield, withstood a sack and a pass batted away in the Stars backfield, to finally nail Kegan Boshamer for a 9 yard TD pass with just twenty six seconds remaining before the halftime/lightning delay break.

Following the lengthy weather delay, the third quarter was a “keep Adams Central pinned down deep in their own territory on a slippery, soggy turf”, type deal.

The Stars had more than a single opportunity to punch one in, but the Adams Central defense, buoyed by the dynamic duo of Hemberger and Gengenbach, stopped Kearney Catholic dead in their tracks, including an stellar goal line stand at the A/C one yard line.

The third stanza ended scoreless, but it was now time for the sensational Gabe Conant’s to take the spotlight.

Conant, who had been running the ball hard all night, shook loose for touchdown runs of 26 and 4 yards in the 4th quarter, extending the Adam Central lead to 37-7. The 4 yard run came at the 6:49 mark.

The Patriots inserted their 2nd team defense into the contest following Conant’s 4 yard score and like all great teams do, Kearney Catholic immediately took advantage. And I mean immediately.

It took just one play for Stars QB Heinrich Haarberg to send fellow speed merchant Logan Miner downfield, and faster than a sneeze through a screen door, the lightning quick Miner was running a sparkling 88 yard pass reception to the house.

Junior Spencer Hogeland converted the PAT kick, and the game scoring was complete.

Gabe Conant concluded the night with 153 yards on 23 totes and a pair of scores. That gives the senior 1,132 yards and 22 TDs in 8 games and 3,467 career rushing yards and 43 touchdowns in his career.

Leif Spady led the Patriot receiving corps with 102 yards on 5 receptions and a TD. Slade Smith and Cam Foster led the Patriot defense with 9 tackles. Gage Wright followed with 8 and Sm Hemberger chipped in with an additional 7 stops.

Sam Hemberger did have 2.5 sacks in the game while Max Grandstrom added 1.5.