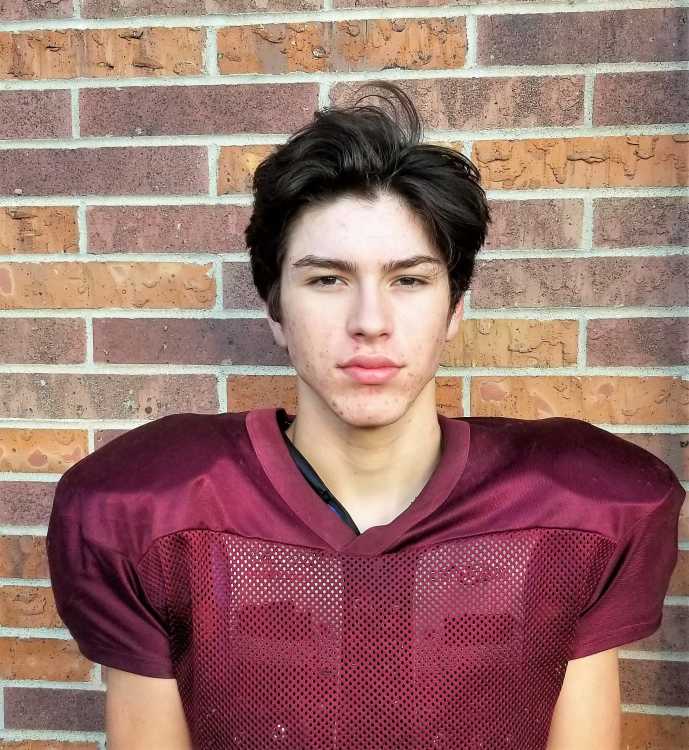 St. Edward running back Will Lawrence is now in elite company after becoming only the 8th Freshman in history to eclipse the 1000 yard rushing mark in a single season. *(photo courtesy of St. Edward football)

*Will Lawrence-St. Edward - 5-11, 175 pound St. Edward back became just the 8th Freshman in the history of Nebraska high school football to rush for over a 1000 yards in a single season, and that includes 11-Man, 8-Man and 6-Man football players.

I want to show you something here. St. Edward plays Six Man football, and have sported a roster with only 10 players on occasion, wondering if they were going to make it through the season. I heard that Darren Lubbe had 8 freshman on the squad to begin the 2019 season, so he may have as may as 12 or 13 kids out this year, which is a blessing.

Anyway, the horrible roller coaster ups and downs these small town players go through week in and week out during the season, has to be tough on the emotions.

As an example, here is Will Lawrence’s game by game 2019 rushing log to date, and you will see what I mean about the roller coaster of emotions when you read it.

Up and down, up and down. Basically, Will Lawrence ran for the majority of his 1000 yards in a span of three games. 932 of them to be exact. That’s quite the accomplishment in my opinion. Yes, Elba and Santee are down, but Dorchester has decent squad.

Another thing to consider is that there had to be a running clock at some point in that Elba game when Lawrence rolled for his 405 big ones. That certainly shortened the game some and limited Will’s rushing opportunities.

Any way you see it, Will Lawrence has to be a special athlete to be rubbing elbows with the 7 freshman that rambled for a thousand yards before him.

Incidentally, every player on this list, excepting Casey Cozad, went on to be 4-Year 1000 yard rushers. Cozad suffered an injury during his sophomore year that limited him to 800 and some yards..

On the defensive side, Rocheford has 32 tackles and 4 INTs. On special teams, Luke has already taken one punt return and a pair of kick returns to the House.

*Carson Cahoy, Broc Douglass-Grand Island - Islanders suffered their initial loss of the 2019 season to Millard West (20-7), but it certainly wasn’t because of a lack of effort on the part of these two GI stars.

Cahoy had a huge night, completing 26 of 44 passes for 268 yards. Broc Douglass grabbed nearly half of Carson’s completions, hauling in 12 of them for 139 yards. The two did not hook up for any touchdowns in the loss, a credit to Millard West’s “bend-but-don’t-break” pass defense.

Douglass played a whale of a defensive game too, logging 7 tackles, but the senior was also instrumental, coming up to turn jet sweep plays back inside and often times sprinting all the way across the field to lend a hand in pass coverage on Wildcats All-State wide receiver Dalys Beanum.

When the time rolls around to discuss Class C-2 State Championship possibilities, this St. Paul bunch has to be a serious part of that conversation with their gigantic offensive line and Mr. Larson running behind them.

*Isaiah Harris, TJ Urban-Millard South - Senior Isaiah Harris sprinted for 164 yards on just 6 carries and hit paydirt on runs of 5, 78, and 52 yards, while junior QB TJ Urban had 8 totes for 115 yards and scoring dashes of 1 and 45 yards in the Patriots 56-7 win over Columbus.

*Tyler Palmer-Columbus Scotus - Senior quarterback came up huge (as usual) in the Shamrocks 40-21 win over city rival Columbus Lakeview last Friday. Palmer racked up 146 yards on only 12 tries and hit the end zone with runs of 3, 50, and 10 yards.

The ‘Rocks are ranked at number six in the latest Class C-1 wild card standings.

*Clayton Denker-David City - Senior David City High star erupted for 302 yards on 27 touches and scoring runs of 9, 41, 8, 42, and 63 yards in the Scouts 42-18 conquest of Twin River. I will tell you right now that Clayton Denker is a very good football player.

Playing at 6-0, 175 pounds, Denker is a guy that is a legitimate threat to go the distance every time he touches the football. Four five 40 speed and :51.4 speed covering that quarter mile, make this long striding glider one of the top backs in Class C-2 this season.

*Jack Dotzler-Omaha Roncalli - The fireballing Dotzler completed 12 of 17 passes for 182 yards and 4 touchdowns in the Crimson Prides 55-7 win over South Sioux City.

Dotzler’s TD receptions were gathered in by Ethan Ortner (50, 2 yards), Trey Ledger (10 yards) and Thomas Kenney (11 yards). Quinn Mulchay also reeled in a 59 yard scoring toss from Darik Rodgers, and Jake Orr caught a 25 yard TD strike from Thomas Kenney. Did you get all that?

*DJ McGarvie, Jace Elliott-Lincoln North Star - Junior DJ McGarvie put on quite the “Dual-Threat Quarterback” show in the Gators 36-28 loss to North Platte. McGarvie completed 19 of 49 passes for 227 yards and two touchdowns and rushed for 129 yards on 23 carries and another score (3 yard run) in the loss.

Sophomore Jace Elliott was on the receiving end of 13 of McGarvie’s 19 completions, ending up with 128 receiving yards and a TD catch. Duane Thomas, a transfer from Chicago whom the NSAA recently declared eligible, caught the other scoring pass that covered 20 yards.

*Jack Cooper, Micah Moore-Fremont Tigers - The Fremont Tigers gave defending Class A champion Omaha Burke a real battle for a while last Friday. The Tigers, who lost the game 59-35, were within 39-35 of Burke midway through the 3rd quarter before the Bulldogs finally pulled away.

Jack Cooper, Fremont’s junior quarterback, hit 17 of his 31 pass attempts for 259 yards and a touchdown with no interceptions. Cooper’s touchdown pass was a 77 yard beauty to junior classmate Dawson Glause, who scorched the Burke defensive backfield with six catches for 195 big ones.

6-0, 160 pound Fremont sophomore Micah Moore, a very polished looking runner for his age, notched his 3rd hundred yard rushing game of the season, going for a career high 138 yards on 29 carries with touchdown runs of 1, 15, and 6 yards. That 15 yard scoring run by the way was a dandy.

Have to be careful with this 2-5 Fremont football team because they are certainly capable of jumping up and biting you where it hurts if your team takes them lightly. Fair warning to Gretna and Elkhorn, the Tigers final two opponents

*Luke Wakehouse-Tekamah-Herman - Senior’s huge 287 yards on 20 carries and 4 TDs in a 41-36 loss to Yutan, vaulted him over the 1000 yard rushing plateau. Luke Wakehouse is the first Tigers running back to gain a thousand yards since Luke Potadle turned the trick back in 2010 (1,177 yards)

Wakehouse now has 1,043 yards with two regular season games left. He will be trying to catch Preston Weece, who holds the school single season rushing record of 1,294 yards, set back in 2005.

Wakehouse is just the 5th Tigers running back in history to eclipse the 1000 yard mark.

*Jacob Diessner-Spalding Academy - 5-9, 145 pound junior QB exploded for 333 yards on 27 carries and two TDs in the Shamrocks narrow 26-25 win over Walthill. That lifts Jacob Diessner over the 1000 yard rushing mark for the season, giving him 1,149 yards and 16 TDs after six outings.

*Romeo White-Santee - Sophomore RB tore up the St. Edward defense to the tune of 439 yards on 24 carries and 8 touchdowns in the Warriors 77-66 loss to the Beavers.

Incidentally, this is the same game that St. Edward’s Will Lawrence went over the 1000 yard mark, becoming the 8th freshman in history to accomplish the feat.

Larby has now rushed for 838 yards and 13 touchdowns for 4-2 West Holt, who has won their last four in a row. McCart, whose season total is 470 right now (6 TDs), has taken off for 322 yards and all six scores the past two weeks.