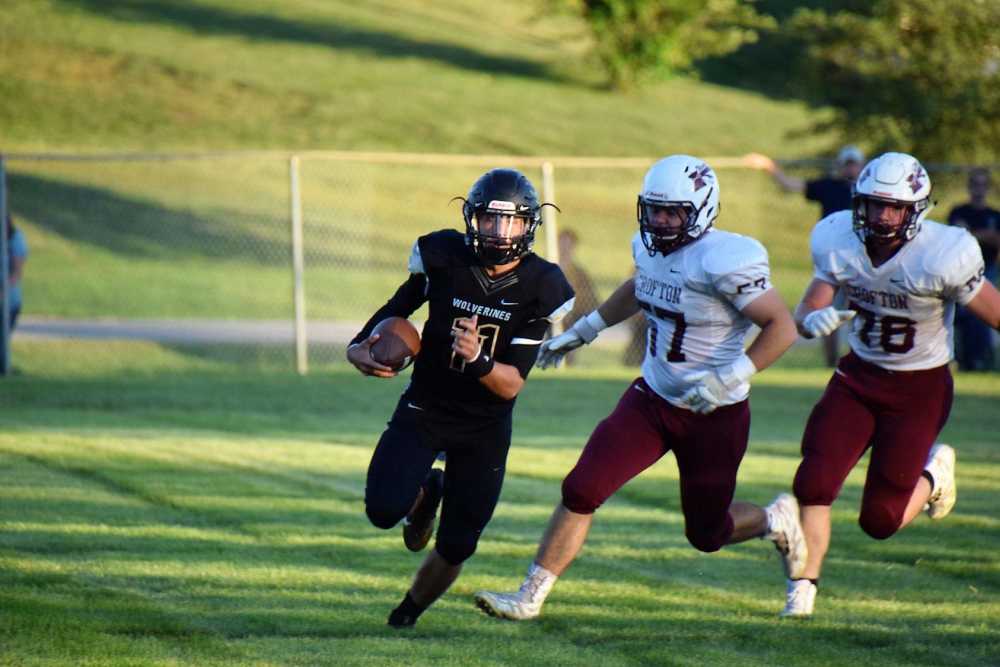 *Will Gatzemeyer - BRLD - It doesn’t get much better in Class C-2 football circles than BRLD QB Will Gatzemeyer. This 5-10, 175 pound senior is the gold standard by which others are measured in that Class.

In BRLD’s 58-0 whitewashing of Louisville, Gatzemeyer simply did his thing, only on a sample size scale. The Wolverines star completed 5 of 9 passes for 161 yards and two TDs, and rushed 11 times for 166 yards with four more scores. He also added 5 tackles on defense, intercepted a Louisville pass and punted one time for 44 yards.

The All-State football/basketball athlete has also been sterling on the defensive side of the ball, making 45 tackles (5 TFL), pirating 6 passes and recovering one fumble. Will’s total yardage number after seven games is 2,554 yards.

The past two seasons with Will Gatzemeyer at the offensive controls, BRLD has gone 15-3.

The poised Tristan Gomes completed 10 of 14 passes for a fat 217 yards and two touchdowns in the big win. The smooth cruising Kaedyn Odermann twice outmaneuvered his defender for scoring receptions of 6 and 38 yards, utilizing his speed and leaping ability to grab the scoring tosses from the sharpshooting Gomes.

Dalys Beanum was Millard West’s leading receiver however, with six catches, good for 136 yards. The 6-1, 170 pound D1 athlete was also a force on defense, drawing the assignment of shadowing Grand Island’s All-State Broc Douglass much of the night.

*Grant Tagge-Omaha Westside (late addition) - Just found out that the exceptional linebacker had 13 unassisted tackles, 6 unassisted stops, and a pair of TFL, which were both sacks, in the Warriors 38-7 win over Elkhorn South.

You bet I’ll add this one to this list. That is a huge night for Mr. Tagge and we’ll have the pleasure of seeing him and the rest of the Westside Warriors Friday night in Columbus.

Notre Dame commit Xavier Watts was equally impressive with his 5 pass receptions for 190 yards. Four of those catches went for touchdowns covering 52, 44, 18, and 73 yards. Watts now has 861 receiving yards and 10 touchdowns this season.

But…...there is some additional statistical information that most people outside of that Wahoo area will probably never see, that earns Luben the name “Workhorse”.

As a team, Wahoo ran the football 50 times for 206 yards. Think back a few sentences ago and you will recall I stated the All-State Luben had 44 of those 50 carries for 204 of those 206 yards. Fair enough, but….

The Warriors Thomas Waido did throw the football a little, eight times to be exact, completing 5 for 27 yards.

So, Wahoo ended up running 58 total offensive plays against Neumann for a total of 233 yards (206 rushing/27 passing). Out of the 58 offensive plays for 230 yards in the contest, Trev Luben carried 44 of those 58, and had 204 of the 230 total yards Wahoo had in that big C-1, District 4 win over City rival Bishop Neumann. Amazing.

“Workhorse”? Yes. “One-Man Show?” No. Why do I say that? Just try and stop Luben with that Warrior Offensive Line in front of him clearing the way. Many have tried, many have failed.

Oh yeah, those 204 yards against Neumann vault Trev over the 1000 yard rushing mark for the second straight season, giving him a current season total of 1,084 yards (19 TDs).

Pretty solid football team here, man. The Tigers are currently number six in the Class B wild card rankings and have home games with Beatrice and GI Northwest to finish out the 2019 regular season.

He also completed 9 of 14 passes for 119 yards, with touchdown strikes of 5 and 14 yards to Big Ben Gebhardt, plus a 60 yarder to Tanner Koss. Gebhardt also made 11 tackles on defense with an interception included.

For the season, Jaxson Kant has 837 rushing yards and 624 yards through the air.

*Devon Brees-Centennial - Seward transfer had a monumental performance in the Broncos 40-25 win over Shelby/Rising City, the team ranked numero uno in the Class C-2 wild card standings coming in.

The 195 pound Brees rambled for 196 yards on just 21 totes and a touchdown on offense. On the defensive side, Devon dished out 17 Excedrin headache tackles, 11 of which were solo stops.

That gives the Centennial senior 1,019 yards rushing after 7 games with 13 TDs, 135 receiving yards (1 TD) and a monster 94 tackles (11 for losses/3 sacks) with 52 solo stops. Don’t kid yourself, this dude is an All-State candidate at running back or linebacker.

This Centennial crew, the defending C-2 champions, is becoming a very dangerous football team, people. After dropping three games in a row to Battle Creek (6-1), Sutton (6-1), and Aquinas (5-2), the Broncos have rebounded with strong wins over North Bend Central (6-1) and Shelby/Rising City (5-2).

The 4-3 Broncos, currently sitting at 11th in the latest Class C-2 wild card standings, are going to be some unlucky team’s worst nightmare as an opening round playoff opponent.

*Rans Sanders-Grand Island Northwest - Vikings quarterback keeps his team rolling by ground and by air as well. In Northwest’s 28-7 win over York, Sanders completed 14 of 19 aerials for 159 yards and scoring passes of 15 yards to Sam Juengst, 14 yards to Tyler Hageman, and 16 yards, to Riley Anderson.

Rans also rushed 12 times for 66 yards and a 17 yard TD in the game. Hageman led all rushers in the contest with his 81 yards on 14 totes. He also led the Northwest receiving corps with 3 catches fo 72 yards.

GINW is in really good shape in the current Class B wild card standings, sitting pretty at the #4 position entering the final two weeks of the regular season.

Marcus Sigle caught 4 Darius Hagen passes for 46 yards, good for a pair of TDs from 22 and 24 yards away. Tre’on Fairgood-Jones also had a 28 yard Pick Six in the route.

*Dex Larson-Blair - Big Dex Larson was held to 51 yards on 19 carries in Blair’s 24-21 loss to Elkhorn Mt. Michael, but the yardage was enough to soar the Bear RB over the 1000 yard plateau for the second consecutive season.

*Rashad Madden-Ralston - Early in the season, I predicted this stunning sophomore runner would eclipse the 1000 yard rushing mark at some point in 2019. No, I’m not a genius by any means, but I was certainly impressed with his talents when I watched film each week.

Last week, in the Rams 23-19 loss to Plattsmouth, Rashad Madden danced his way to 138 yards on 23 touches and a pair of touchdowns, lifting him over the 1000 yard rushing mark (1,002) for the season. Not many 10th grade running backs get that done in Class B, where week in and week out, it’s a physical bruising grind that really takes a toll of the body.

Another factor that makes Rashad’s accomplishment so special is the fact his Ralston team is just 1-6 right now. And the prospect are looking sort of dim for additional win for the Rams, with games remaining against Norris and powerful Waverly.

*Garrett Hoefs-Lincoln Lutheran - Freshman rushed for 113 yards and scored all three touchdowns in Lutheran’s 20-7 victory over Auburn. Hoefs touchdowns came on a one yard run, a 35 yard dash and a 50 yard Pick Six.