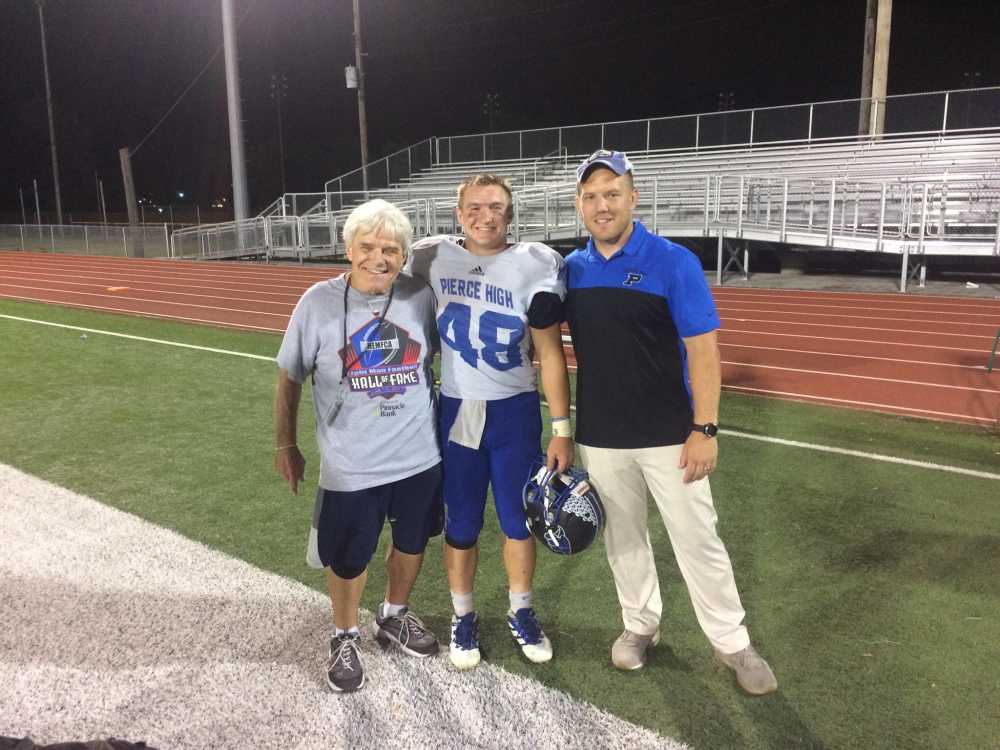 *Brett Tinker, Bluejays O-Line-Pierce - All-State LB/FB has really turned up the heat since the injury to quarterback Dalton Freeman a few weeks back.

With the Three Horsemen now being reduced to two, Tinker has turned up the touchdown output and last week’s game with Lakeview was a prime example.

The bruising, but lightning fast Pierce fullback put five touchdowns on the board before halftime against a good Columbus Lakeview squad. Brett Tinker raced in from 37, 13, 8, 2 and 4 yards away to give the Bluejays a commanding 35-0 halftime advantage.

Speaking of lightning, the game was called at the 1:57 mark of the 4th quarter because of that, with Pierce on top 56-0. Tinker ended up with 133 yards on 16 carries and those 5 TDs. Jeremiah Kruntorad rambled for 77 yards on just 9 totes with a 28 yard scoring run in there. QB Carson Oestreich added 72 yards on 7 touches and a 12 yard TD run.

When you think of State Champion possibilities in Class C-1, or in any class for that matter, I always weigh in heavily on the guys in the trenches when thinking offense. Although I haven’t seen Wahoo live this year, this O-Line from Pierce may be awfully difficult to beat because of talent and depth. Those boys just simply beat you down and allow runners like Tinker, Oestreich, Kruntorad, or whomever they plug in there, to just hit those huge gaps and go.

*Jay Ducker, Thunderhogs, Nate Glantz, Zavier Betts-Bellevue West - Jay Ducker cruised for 214 yards on just 13 carries in the Thunderbirds 56-7 win over Norfolk. The smooth as glass senior reached the endzone on runs of 63, 41 and 5 yards and caught a 9 yard scoring pass from QB Nate Glantz. Mr. Ducker finished the evening with 244 yards worth of total offense, thanks to the crisp, efficient blocking of the Thunderhogs in the Bell West offensive trenches.

Sullivan led all receivers with 5 catches for 107 yards. Betts followed with his six receptions for 71 yards.

The skillful Isaiah Harris has now run for 811 yards and 13 touchdowns in six games and is certainly a threat to go the distance at any time. TJ Urban, a 1000 yard rusher like Harris a year ago, has rushed for 461 yards with 6 TDs to date. And don’t let yourself be fooled into thinking Urban can’t throw the football.

The multi-talented junior has thrown 70 times to date, completing 41 (59%) of those for 664 yards with 7 TD strikes and only 1 pick. And also consider Millard South has recent Husker commit Kohl Herbolscheimer in that Patriot line to open those holes on offense.

Right now, Millard South is rated 3rd in Class A behind Bellevue West and Millard West, and is 7th in the latest Class A wild card standings.

*Gavin Aken, Caleb Francl, Islander “D”- Grand Island - It was fun and games in the first half for the Islanders as they bolted to a 62-0 first half lead over Omaha Bryan and ultimately a 69-0 win.

Meanwhile the Islander defense held the Bears to 1 of 12 passing for six yards and a minus 34 yards on 33 rushing attempts. My math says GI held Bryan to a minus 28 total yards for the game.

Jesus Zaragoza booted field goals covering 30 and 25 yards as well as kicking 5 of 6 PATs against Raymond. This season Zaragoza is 37 of 39 on PAT attempts and a perfect 5 for 5 on field goals. How valuable is this guy going to be in the post season? I can guarantee you there will not be any concerns about this guy being money in the playoffs. Also can boom kickoffs a mile.

And Kole Bordovsky? Same story, different Friday. The 6-0, 185 pound All-State candidate made 15 stops in the Raymond Central game and has 78 tackles through six games with 42 solos.

His partner in tackle crime, Grant Kolterman, added 10 tackles last week and has 61 stops thus far in 2019 with a monster 13 tackles for loss and 5 sacks, 2 fumble recoveries (1 for a TD), one blocked kick, and is also responsible for a safety.

And as far as all those tackles for lossses and sacks, hey, Kolterman is just a friendly chap who likes to visit the opponents backfield to welcome them to Wahoo Warrior football. What a guy!

*Tommy Stevens, Zach Smith, Kelen Meyer, Garret Kluthe, Riley Warner-Ord - Quintet of Chanticleer stars helped get Ord back on track after the 23 point loss to Adams Central. And get back they did, in 45-7 win over O’Neill.

RB Tommy Stevens and QB Zach Smith reunited their powerful ground game duo to the tune of 331 rushing yards between the two. Stevens, who has 938 yards this season, exploded for 197 yards on 25 carries, while Zach Smith added 134 yards on 15 totes. Both had short 3 yard touchdown runs in the game.

Smith was also efficient in his passing game, hitting 8 of 13 for 221 yards, 3 touchdowns. Zach’s TD passes were caught by Riley Warner (76, 31 yards) and Gage Smith (36 yards). Warner had three receptions for a huge 140 yards.

Garret Kluthe had 10 tackles in the O’Neill game and 47 for the year. Stevens and Smith are also prolific on defense, haveing made 38 and 37 stops respectively thus far in 2019. Of course big Jesus Loya is in that mix, having made 35 stops so far, a ton for a D-Lineman.

*Seth Fermanik-Fairbury - 5-11, 200 pound Jeffs standout had a whale of a game in Fairbury’s 27-13 victory over a good Milford squad. Fermanik, a big time All-State candidate at linebacker, can also run the football a “little bit” too.

On defense, Fermanik made 17 tackles, made one for a loss, and pirated a Milford pass, taking it 40 yards for a Pick 6. He already has 76 tackles this season with 43 solo stops.

I will also salute my friend Matt Edson, who is doing a terrific job as head coach for the Jeffs after 7 years as Offensive Coordinator. Not a better Man for the job than Matt, trust me.

Meridian quarterback Brayden Rut was also a perfect 4 for 4 passing for 90 yards, which included a 34 yard TD strike to senior Hunter Green.

Wyatt Haverluck, who has played in only four games this season, has still managed to rush for 517 yards.

Centennial, who lost to a trio of powerful teams (Battle Creek, Sutton and Aquinas) with a combined 15-3 record, saw Davon Brees go off for 141 yards on 25 touches and two touchdowns, and QB Cooper Gierhan rush 22 times for 97 yards and scoring runs of 1,4,1, and 6 yards in a big 40-25 win over a nice North Bend Central team.

Brees, the Seward transfer, also had a monster defensive game, making 14 tackles with 5 tackles for losses. All in all, Centennial sacked North Bend QB Austin Endorf 7 times with Brees having three of those seven.

Davon Brees has some pretty lofty numbers after half a dozen games. The 195 pound athlete has 823 rushing yards (9 TDs), 135 receiving (1 TD), 1,242 All-Purpose yards, a punt return TD and all this with NO lost fumbles. On defense; 77 tackles, 9 TFL, 3 sacks, a pair of fumble recoveries (against Battle Creek).

Floyd now has 843 yards with 18 TDs, a punt return for another score and 41 tackles on defense for 5-0 Sutherland. This dude is a fabulous football player, folks.

The Sailors are 13th in the Class D-2 wild card standing and are looking strong for an upper bracket playoff slot.

Longhorn QB Blake Hansen could not have been much more effective than he was in this baby. The 5-10, 200 pound sophomore threw six passes in the contest, completed 4, with all four going for touchdowns. The four scoring tosses totalled only 43 yards, but they’re still worth 24 points.

*Zane Flores-Gretna - Freshman quarterback looked pretty stable in his first start last week against defending Class A king, Omaha Burke. No, the Dragons lost the game 33-0, but the youngster managed to complete 19 of 40 passes for 235 yards with only one interception.

It’s not everyday that a young man, who probably isn’t even old enough to drive yet, is given the opportunity to start at QB in the rugged Omaha Metro circles. Give this kid some time and he will be a good one..

*Oakley Rosno, Jake Knehans-Silver Lake - Not very often a team has TWO quarterbacks who pass for over a hundred yards in a single game, but this sophomore/freshman pair did just that in a 61-60 loss to Wilcox-Hildreth.

Rosno also rushed 23 times for 123 yards, caught a 15 yard pass, and made 9 stops on defense and blocked a Wil-Hil field goal…….and still came up short on the scoreboard. And Jake Knehans? 14 rushes for 77 yards, a 14 yard reception and 12 tackles on defense……..what does a guy have to do to get a win around those Roseland/Bladen parts?

*Gage Krolikowski-Valentine - 139 yards rushing with TD scampers of 11, 26 yards in the Badgers 46-8 win over Gordon-Rushville. Valentine is now 4-2 and a solid #10 in the C-1 wild card standings. Three cheers for head coach Blake Beebout, a man who knows his profession well.

This is what the chart of a #1 rusher in the Nation looks like after seven games;

…..next up, Part Three of Friday Night Lights Football Heroes.