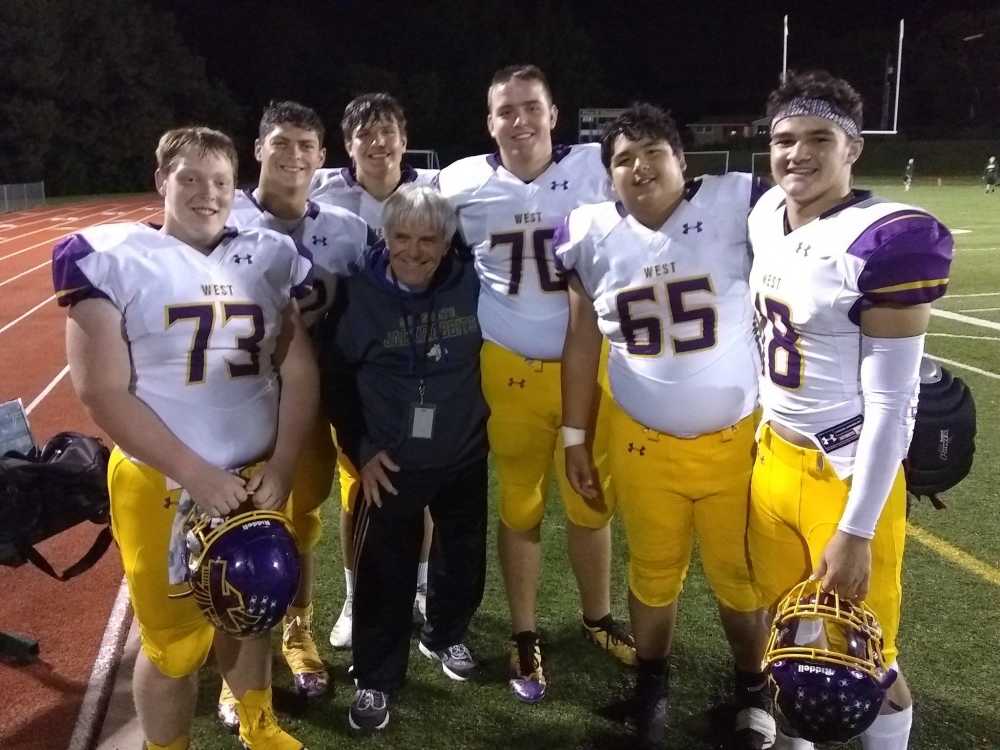 The senior field general was red hot with his 15 of 19 passing for 208 yards and 3 touchdowns in Bellevue West’s 42-0 shutout win over the Thunderbolts.

Nate Glantz, who reacted well (as usual) to the fierce Pius pass rush, hit Husker commit Zavier Betts with scoring tosses of 29 and 7 yards, then hooked up with Keagan Johnson for a 19 yard touchdown pass.

Northern Illinois commit Jay Ducker ran for 108 yards on 14 carries with TD runs of 10, 9 yards while the Pigs in Purple Offensive Line provided the big push for the rushing game and a rock solid pass protection package for Nate Glantz.

The Chieftains, who were unbeaten going into the BRLD contest, have an offensive line that creates great openings for their junior back. One of Yutan head coach Dan Krajicek’s top two plays to spring the hard charging Caden Egr, is the off-tackle blast or a simple pitch sweep.

Egr, who has averaged 213.8 rushing yards per game, knows how to follow his convoy of blockers and certainly knows what to do after he turns the corner to head up field. At 190 pounds, this dude is tough to bring down, earning many yards after contact.

Caden is also an excellent linebacker, always flowing toward the man with the football. Thus far in 2019, the Chieftain product has made 35 tackles on defense, 28 of which are solo stops.

*Rashad Madden-Ralston - The Rams are only 1-4 this season but you sure couldn’t tell it by the looks of 5-8, 160 pound Rashad Madden’s 2019 game by game rushing stats.

In Ralston’s opening game, 20-12 loss to Elkhorn Mt. Michael, Madden carried only 4 times for 28 yards, but the 7 yard/per carry average may have told the Rams coaching staff some things.

The very next week, the high octane sophomore was given 10 carries and responded with 195 yards and 4 touchdowns in the Rams 49-7 win over South Sioux City. The next week against Beatrice, Rashad carried the mail 13 times for 153 yards and a TD.

It was time to increase this kid’s workload the following week versus Omaha Roncalli. And, despite being pounded 56-14 by the Crimson Pride, Rashad Madden lined up like he owned the place and ripped off 227 yards on just 20 carries with a pair of spectacular, highlight reel touchdown runs.

On the 40 yarder, Madden went through the “A” gap, right into the heart of the Roncalli defense, appeared to be gang tackled, then squirted out of the pile to score. Yep, right out of the Tommy Frazier Fiesta Bowl 75 yard touchdown book.

The second scoring one was better yet, with the ball sitting on Ralston’s 25 yard line. The play call was a sweep left, but the Ralston QB pitched the ball behind Rashad. The sophomore calmly stopped in his tracks, picked up the errant pitch and reversed his field, retreating all the way back to his 19 yard line, then sweeping around his right end for a shocking 75 yard scoring jaunt.

In last weeks 21-12 loss to Omaha Gross, Madden continued his rushing blitz by bolting for 191 yards on 29 carries and a touchdown. That gives the Rams sophomore sensation 794 yards on just 76 carries (8 TDs).

That five rushing total is incredible for a back playing for a 1-4 football team and those carries are not during “mop-up” duty, friends. We’ll maintain a sharp lookout on this young man’s progress for the remainder of the season.

The Rams have games remaining with Omaha Skutt, Plattsmouth, Norris and Waverly, which is certainly no cakewalk. So if Rashad Madden should reach the 1000 yard mark this season, Class B had better stand up and take notice.

This dude can flat out run the football. Baller.

*Will Lawrence-St. Edward - This 5-11, 175 pound freshman, along with his youthful St. Ed teammates, have certainly taken some frightful beatings at times this season. Although I did see some glimpses of talent from young Mr. Lawrence in the Dorchester (175 yards/16 carries) game, the Beavers still lost the contest, 56-19. But there was Week 5 and a game with winless Elba on the St. Edward schedule.

Well, in St. Edward’s 51-13 win over Elba last week, freshman Will Lawrence ran up, around, over and through the Bluejay defense to the tune of 405 yards on 19 carries and 6 touchdowns. That’s 21.3 yards a pop by the way.

That gives the Beaver freshman standout 659 yards on just 58 touches (8 TDs) for the season. Now my mind is beginning to build hopes here.

Is it possible that Will Lawrence could become only the 9th freshman in history to rush for over a thousand yards?.........Stay healthy, my friend.

Broc’s scoring receptions covered 20, 48 and 7 yards. The aforementioned Carson Cahoy was just deadly with his throws, hitting 20 of 28 passes for 363 yards and those 3 scoring strikes to Douglass.

That stout Islander defense also limited North Star to 190 yards of total offense on the night.

And about that 1000 yard passing honor. The 363 yards against North Star raise Carson Cahoy’s 2019 (5 games) passing yardage numbers to read like as follows;

Backfield mate Connor Crandall was also sharp in the shutout, completing 12 of 19 passes for 141 yards. That included a 13 yard scoring strike to Jackson Trout.

*Rans Sanders-Grand Island Northwest - Vikings senior was forced to use his passing skills a bit more than usual in Northwest’s exciting 35-28 win over Seward. Sanders apparently had the hang of it because he hit 18 of his 26 pass attempts for a whopping 279 yards and a pair of touchdowns in the Vikings big win.

Coach Kevin Stein’s Vikings are rated #4 in Class B and will continue district play this Friday with a trip to Beatrice.

*Cody Wright-North Platte - 5-11, 185 pound junior notched his fourth 100 yard plus rushing game of the season in the Bulldogs 41-34 overtime loss to Lincoln Southwest. Wright toted the ball a grueling 44 times for 169 yards and TD runs of 8 and 2 yards in the game.

Wright has now rushed for an unofficial 554 yards and 5 touchdowns in 2019. Only the powerhouse Grand Island defense has held the North Platte ace under the 100 yard rushing mark this season (53 yards)

*Isaac Herbek-Grand Island Central Catholic - Sophomore wide receiver/defensive back picked off three passes in the Crusaders heartstopping 35-34 loss to Centura. Herbek, who was the leading freshman receiver in the state a year ago (698 yards/6 TDs), also made 10 tackles for Keith Kester’s defense and also snared four Russ Martinez passes for 74 yards and a touchdown.

Herbeck now has 14 receptions for 316 yards (3 TDs) for the season. The rangy sophomore has also made 33 tackles and intercepted a whopping six passes in five games.

*Tyson Gordon-Omaha Skutt - Another video game type performance for the All-State football/basketball phenom. In Skutt’s 34-0 win over Platteview, Gordon rushed 10 times for141 yards with scoring jaunts of 23 and 52 yards, and completed 12 of 15 passes for 170 yards and a 14 yard TD toss to junior Barrett Liebentritt.

Drew Rase also joined in the scoring by breaking loose for a 38 yard YD run.

Strauss ended the night completing 13 of 27 passes for 154 yards and a touchdown. He also rushed 23 times for 90 yards and the remaining two scores, while making 11 tackles on defense.

Tyler Strauss, who started the season as a wide receiver for the Pioneers, has accumulated 525 All-Purpose Yards in 4 games this Fall.

I doubt if the good looks have anything to do with Aaron’s vast football skills, but the last name Mick certainly does because it has deep bloodlines around those parts. All Micks are terrific athletes, including the pole vaulting girls!

*Mason Combs-Wilber-Clatonia - Talk about making the most of your carries. The 6-2, 175 pound Wilber-Clatonia sophomore carried the football three times in a 49-0 win over Freeman, rushed for 143 yards, and scored TDs covering 39 and 85 yards.

Tad Moldenhaur returned a Freeman punt 55 yards for a score and added touchdown runs of 7 and 65 yards and in the route.

*Aliziah Wraggs-McMorris-Omaha Northwest - 6-0, 189 senior had 88 yards on 17 carries and a couple of touchdowns in a 48-19 loss to powerhouse Millard South. Not an explosion by any means, but the dude had back-to-back 100 yard rushing games earlier against Bellevue East (123) ad Omaha Benson (177), so Aliziah’s five game rushing total stands at a respectable 455 yards.

Not bad for a back toiling for a 1-4 football squad.