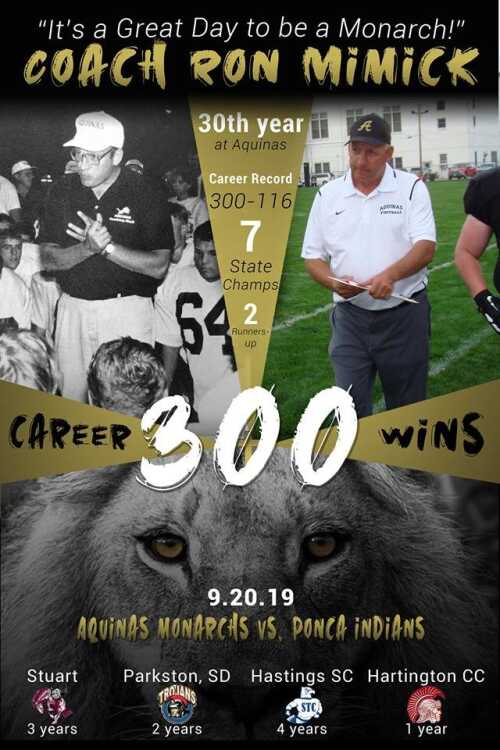 *Aquinas Head Coach Ron Mimick - The Monarch head man, who would probably insist he’s not a Legend, notched win number 300 when Aquinas whipped Ponca 49-7 last Friday. The man whose career stands at 300 wins and only 116 losses, is only the 9th coach in Nebraska high school football history to reach the coveted 300 Win Club.

I haven’t met many high school coaches in my life that know the game better than Ron Mimick. A deeply religious man and student of the game, Coach Mimick has created a tradition at Aquinas few other institutions can match.

The Scotus grad learned from some of the best and has developed some unique training techniques that are formulated to make the usually undersized Monarchs (especially in the line) very difficult to deal with on either side of the football.

Like the Eight 300 Career Win Coaches who came before him, Ron Mimick always has a terrific staff surrounding him. One in particular is Defensive Coordinator Tony Smith, who, like Mimick, is one of the Best in the Business. Doesn’t hurt to have played football at Notre Dame either.

And now, it’s time for Bobby Micek, as Coach Ron Mimick still calls me to this day, to list the Nine Coaching Legends who have reached that coveted 300 career win mark.

The Chanticleer strongman ran for 305 yards on 31 carries and hit paydirt with runs of 3, 71, 1 and 8 yards in Ords 44-21 victory over Central City. He also had a 6 yard pass reception and was in on 5 tackles on defense.

Stevens has rushed 93 times for 645 yards and 8 touchdowns in just four games for Coach Nate Well this season. Between he and quarterback Zach Smith, the Chants have a deadly one-two pinch in that backfield and an offensive line that can get the job done. Let’s give those men up from some props.

In case you hadn’t noticed, this Ord bunch has a really solid football team.

- This guy is nothing short of amazing. Last season, if I remember correctly, Nate Glantz and Tristan Gomes were waging quite a battle for the starting quarterback position at Millard West. I think they alternated the first two games of the 2018 season, then Gomes pretty much took over.

So, Glantz ends the 2018 season completing 16 of 32 passes for 236 yards, 4 touchdowns, with no interceptions. But with Gomes tabbed as the starting quarterback at Millard Westmin 2019, it appears to me that Mr. Glantz wanted another shot at the quarterback position, but elsewhere

Now, we fast forward to the present time and find the 6-0, 180 pound Nate Glantz at Bellevue West and capably filling the shoes of the graduated Evan Kieser, who threw for 2,445 yards and 29 TDs last season. That’ a far cry from 236 yards and 4 TDs folks.

But Glantz stepped in for the Thunderbirds this season and blew past his 2018 total of 236 yards at some point during Bellevue West’s opening game 63-6 victory over Lincoln High.

Last Friday, in the T-Birds 36-13 win over previously unbeaten and 7th ranked Elkhorn South, Nate Glantz competed a sizzling 20 of 28 passes for 266 yards and three TDs. That vaulted Nate’s 2019 passing yard total to 1,154 yards with 13 touchdowns and NO interceptions. And don’t forget the dude has also rushed for 220 yards this season.

And now you know why the Thunderbirds are favorites to capture the Class A State Championship in 2019. No, Nate Glantz doesn’t do it all, but his presence certainly reinforces an already killer roster that features Jay Ducker, Zavier Watts, Keagan Johnson, Kaden Helms, Thomas Ault and the Thunderhogs on offense, plus defensive studs like Jack McDonnell, Jayden Roberts, Christian Lilienkamp, Kier Kier, Matt Thompson, Devin Mills and Cruz Jurado, who also does the kicking.

Tigers rushed for 488 yards as a team in a 72-26 win over Kimball. QB Quade Myers rambled for 232 yards on 18 carries and 4 touchdowns, Serbando Diaz added 161 yards on 13 totes and another 4 TDs, while Corbin Homer, just a freshman, chipped in 83 yards on 8 tries with a pair of scores.

Anyone that knows the game of football, realizes that Myers, Serbando or Homer would go nowhere without an outstanding Offensive Line. And just like Bellevue West above, it’s high time we salute those terrific Dundy County/Stratton men in the trenches, and they are; Seniors: Lane Shillington (5-10, 170), Reice Haines (5-11, 170), Dominic Sis (5-10, 165) and Jesus Olivas (5-10, 185).

*Evan Johnson, Gabe Conant -Adams Central - Johnson is first of two Hastings quarterbacks that lit up the skies last Friday. The 4 year starter for Coach Shawn Mulligan completed 14 of 23 passes for 226 yards and 3 TDs in the Patriots 32-14 win over previously undefeated Gothenburg.

That raised Evan’s season passing yardage total to 760 yards with 10 TDs and just 1 INT. It also raises the talented Johnson’s career total to 6,168 yards through the air with 64 touchdowns.

Two time thousand yard rusher Gabe Conant had his best game of the 2019 season against the Swedes, rolling for 156 yards on 26 carries. Conant reached the end zone three times with runs of 14, 21 yards and a 14 yard pass reception.

*Jarrett Synek-Hastings High - Junior QB shredded Gering’s defense with his 266 yards passing and 5 touchdowns in the Tigers 45-0 win. Synek not only completed 14 of 23 passes, but ran the ball six times for 41 yards to keep that Gering defense honest all evening.

Jarrett’s 5 touchdown passes were spread out amongst Carson Shoemaker, who had 6 catches for 100 yards and one TD. Austin Nauert had 4 receptions for 61 yards and two TDs, while Braden Kalvelage caught only two Jarrett Synek passes, but both went for scores and totalled 81 yards.

*Sebastian Harsh, Jacob Krul, Big Sam Clarkson-Scottsbluff - First of all, there may not be a more freakishly athletic guy in the state than Scottsbluff’s Sebastian Harsh, and his stat line against Sterling Colorado last Friday will reflect that statement.

And remember, Sebastian Harsh plays outside linebacker on that Bearcat defense. Not too many QBs in the state that double up like that. This dude is a Division I football prospect, period.

Jacob Krul had his usual solid offensive game for the Bluffs, rushing for 144 yards on 22 carries and a TD. He also caught a pair of Sebastian Harsh passes for 21 yards.

It is a chilling sight when you see Sam Clarkson’s huge 6-6, 270 pound frame raise up from that lineman’s stance and come rolling around the left side to lead a sweep. If you are a defender, it may be more advisable to just trip over a stripe on the turf before Big Sam gets there to bury you into that same turf.

Before we get to our next Friday Night Hero, let’s check some four game totals for Sebastian and Jacob.

Can Scottsbluff make a repeat trip to Lincoln this season?

The outstanding Austin Endorf, who is just two passing yards shy of the coveted 5,000 yard mark in his 22 game career, completed 21 of 36 tosses for 211 yards and a pair of touchdowns (to Cody Prohaska and Cody Pospisil) in the big win.

Meanwhile, Ethan Mullally bolted for 166 big ones on 23 carries and a touchdown. Prohaska, who caught half a dozen passes for an even 100 yards, was huge on defense, making 5 tackles, recovering a Crusader fumble and pirating a GICC pass.

*Ty Erwin, Noah Schutte-Laurel-Concord-Coleridge - Pass/catch combination was deadly in LCC’s 40-20 victory over Osmond. Ty Erwin, a 6-0, 170 pound senior, who played tight end a year ago, blitzed Osmond with his 18 of 33 passing for 213 yards and 4 touchdown night.

2018 All-State, thousand yard receiver Noah Schutte was his favorite target (bet you never could have guessed that), gathering in 12 of those aerials for a monster 185 yards and two TDs. Both of Schutte’s clutch scoring passes of 13, 24 yards came in the 4th quarter. And, this guy says Noah Schutte is without a doubt, one of the finest overall athletes in the state of Nebraska, regardless of class.

6-0, 210 pound senior Dylan Reimers had the remaining pair of TD receptions that covered 8 and 10 yards. Laurel-Concord-Coleridge is now 3-0 but is not yet rated in due to a deep pool of excellent Class D-1 Eight Man football teams this season.

*Tyler Larby-Atkinson West Holt - 5-9, 165 pound junior quarterback had a night to remember in the Huskies 48-36 win over Clearwater/Orchard. Larby ran for 189 yards on 28 carries and scored 4 times on short blasts of 1, 1, 1 and 3 yards. He also completed 9 of 22 passes for 122 yards and three touchdowns, made 5 tackles on defense and had an interception.

West Holt, who had dropped their first two games to Class D-1 top rated Burwell (21-48) and powerful 3-0 Neligh/Oakdale (12-56), proved they could put some points on the board last week.

*Joey Braasch, Garrett Esch-Columbus - Columbus improved to 3-1 with the Discoverers 33-13 win over Fremont. Garrett Esch, a terrific looking 6-1, 180 pound junior, rushed for 165 yards on 19 touches and scored on runs of 5, 24 yards. He also caught three CJ Fleeman passes for 54 yards.

Joey Braasch rushed 6 times for 47 yards and scored TDs on runs of 3, 7 yards. The 205 pound senior speedster also picked off a Fremont pass and returned it 95 yards for a touchdown.

*Dana Hobbs-McCool Junction - 5-8, 155 pound senior scored six touchdowns on runs of 35, 30, 5, 23, 4 and 68 yards in McCool’s 68-15 win over Silver Lake in Six-Man football action last week. The Mustangs are currently rated #2 in the state behind Harvard in those 6-Man football ratings. The two teams do not meet during the regular season.