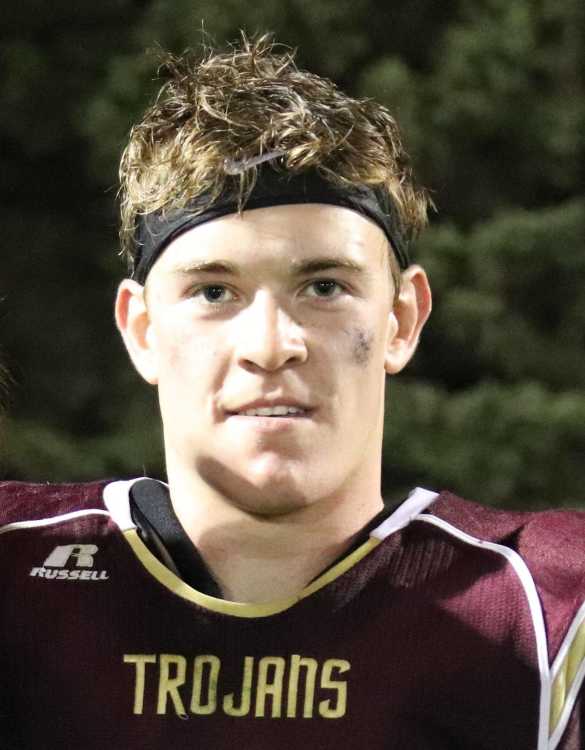 The multi-talent Erb, who had a two game total of 168 yards on 34 carries coming into the contest, reached the endzone on runs of 25, 65, 4, 15 and 32 yards, had only one pass reception, but that going for a 7 yard score, and launched a booming 52 yard punt on his only kick of the night.

The thing about this game that makes it more incredible, was the fact Wakefield was nursing a slim 22-16 at the halftime break. But the game took a crucial Trojans swing when Erb scampered 65 yards for a touchdown on the opening play of the 3rd quarter.

The very next scrimmage play after the ensuing Wakefield kickoff, quarterback/defensive back Blake Brown picked off a Jaxson Kant pass, setting up great field possession for the Trojans.

Then, more magic from Justin Erb.

On the very first play after Brown’s interception,the Trojan quarterback lofted a pass intended for Nick Arenas, but the ball glanced off Arenas hands, and who is there to catch the errant ball in the endzone for a 7 yard touchdown? Justin Erb.

So, in less than two minutes into the 3rd quarter, Wakefield’s lead went from 22-16 to 38-16, Big Mo hopped on the Wakefield side for the remainder of the contest, and Justin Erb continued on his record setting night.

When it was all in the books, Justin Erb toted the ball 42 of Wakefield’s 53 total rushing carries and accounted for 409 of the Trojans 435 total ground yardage.

Keep in mind, this young man didn’t just suddenly appear out of nowhere. Despite the fact Erb rushed for only 296 yards and 6 TDs a year ago, he was an All-District selection at linebacker (82 tackles) and voted Wakefield’s MVP defensive player in 2018. The dude is a Baller.

So, Justin’s three game rushing total now stands at 577 yards with 11 touchdowns. I will guarantee you the junior sensation will only have 8 games this season (barring an injury), due to the fact Wakefield is ineligible for the D-1 playoffs because they are over the boy enrollment number limit to be eligible for the 8-Man football playoffs.

We’ll keep a close watch on this young man the rest of the way. Incidentally, Wakefield was 1-1 and rated #5 by the Omaha World-Herald going into the Lutheran High NE game.

Operating the SkyHawk offensive machine with fresh legs resulted in the Skutt All-State sensation throwing and rushing for a pair of touchdowns in Skutt’s 28-7 win over the Dukes in York.

Gordon, a master of trickery when he gets a football in his hands, reeled of touchdown sprints of 34, 35 yards and connected with 6-1, 210 pound tight end Max Brinker for a 76 touchdown pass, then spotted Michael Polcyn for a 27 yard, third quarter scoring strike.

Skutt, who finished the contest with over 400 yards of total offense, is headed for a sweet October 11th showdown with District 2 opponent, Waverly.

QB Carson Oestreich, who played most of the game under center, ran for 120 yards on just 12 totes and hit paydirt on a 13 yard scamper that happened in just 3.5 winks of an eye.

Senior Jeremiah Kruntrad was no slouch either, rambling for 90 big ones on just 7 carries, which included touchdown runs of 10 and 51 yards.

*Will Gatzemeyer-BRLD - All-State, Dual Threat quarterback was absolute money in BRLDs big 40-32 win over Norfolk Catholic. The Wolverine senior completed an unofficial 16 of 24 passes for 316 yards and 3 TDs and rushed 24 times for 127 yards and another TD (1 run) in the sweet victory.

All in all, the amazing Will Gatzemeyer accounted for 443 yards of total offense for the Class C-2, number one Wolverines. Lucas Vogt caught 7 passes for 68 yards with scoring catches covering 41, 24 yards. Gatzemeyer’s other touchdown pass of 37 yards went to Dylan Beutler.

Now, if Gatzemeyer’s newspaper account stat numbers for the Catholic game are correct, he would have surpassed the 5,000 yard career passing mark (5,008/55 TDs). His career rushing numbers would read 2,262 yards/30 TDs. That would be an astounding 7,270 combined passing and rushing yards with 85 TDs, and this is 11-Man football friends.

Here’s to a healthy season the rest of the way, Will Gatzemeyer.

*Cole Payton-Omaha Westside - Warriors quarterback was solid gold in Westside’s 41-0 conquest of Gretna. The 6-1, 200 pound junior completed 10 of 15 throws for 149 yards and three scores, and gained 83 yards on just 6 carries in the win.

Payton, who scored on a 69 yard run with 2:37 left in the second quarter, connected with Division I recruit Avante Dickerson for 32 yard score, and also found Cal Weidemann for TDs covering 37 and 25 yards. Weidemann finished the game with 3 catches for 64 yards.

*Clayton Murphy-Ogallala - The Indians suffered their first loss of the season last Friday to Kearney Catholic (28-19), but the 6-4 Clayton Murphy was still impressive on the ground and through the air.

Murphy, under heavy pass rush pressure all night, still managed to complete 17 of 31 passes for 284 yards and a pair of scoring passes, plus running 12 times or 104 yards and another touchdown. Clayton’s touchdown passes were caught by Brandon Beamon (53 yards) and Brock Skinner (5 yards).

The Ogallala gunslinger now has 1,079 yards passing with 12 TDs and only 3 picks. Murphy, who passed for 1,831 yards and 14 TDs a year ago, has racked up a career passing total of 3,719 yards with 19 TDs during his three stint as starting QB for Coach Brent Bauer.

It’s “hit the repeat button” each game for the Neumann dandy, who has accumulated 509 yards with 12 touchdowns, piled up 687 All-Purpose yards and, made 51 tackles on defense with an interception and a fumble recovery sprinkled in thus far in 2019.

And speaking of defense, Lilly and the Neumann boys were down right stingy against Lincoln Christian, limiting the Crusaders to just 56 yards rushing and no yards through the air.

Bishop Neumann is currently rated #5 in the latest OWH ratings.

Waverly piled up 410 yards against Minutemen, 350 of which were on the ground. RB Zane Schwang led the way with 96 yards and scoring runs of 17, 3 yards. QB Mason Nieman was close behind with 82 yards on just 7 tries and TD runs of 15, 9 yards. The mobile field general also completed 5 of 6 passes for 50 yards to keep Lex honest.

The Vikings are now ranked #3 in Class B with only Omaha Skutt and Scottsbluff ahead of them. As stated earlier, Waverly is on a collision course with Omaha Skutt, who visits the Vikings on October 11th.

*Brody Krall, Seth Firmanik-Fairbury - The Jeffs evened their 2019 record to 2-2 with a 28-7 victory over Falls City, rushing for a big 354 yards in the process. 5-8, 175 pound junior Brody Krall led the way with 219 yards on 23 carries and two total touchdowns of the long distance nature.

Krall escaped on a 77 yard run from scrimmage and added 93 yard kick return for good measure. Seth Firmanik, the bruising 6-0, 195 pound four year starter at RB, added 117 yards on 20 totes and a 15 yard scoring dash in the Jeffs important win.

*”Slammin” Sam Levy-Omaha Central - 6-3, 175 pound senior place kicker was a perfect 8 or 8 on PATs in the Eagles 56-0 route of Omaha Bryan. This was the first time in four games Slammin’ Sam has not kicked a field goal. Levy had previously kicked a 28 yarder in the 53-2 win over Benson, a 27 yarder in the loss to Omaha Burke and a pair of field goals in the Eagles heartbreaking 24-20 loss to Creighton Prep.

Levy is tied for second in Class A kick scoring with 21 points. Millard South’s Cole Lammel apparently leads the Class A ranks with 22 points.

*Logan Wiedel-Thayer Central - Slender, 6-3, 160 pound junior quarterback completed 12 of 27 passes for 329 yards and 6 touchdowns in the Titans crazy 68-50 win over Exeter/Milligan/Friend. Wiedel also rushed 7 times for 52 yards and a 43 yard TD that broke a 42-42 deadlock a minute deep into the 4th quarter.

Thayer Central, who piled up 491 total yards, improved their record to 2-1. I’m also wondering if this may have been Logan Wiedel’s first game of the season at the quarterback position or his first action game action, period.

It hurts to even think about facing that schedule..

*Wyatt Wagner-Chambers/Wheeler Central/Ewing (CWCE) - 5-9, 160 pound senior star rushed 25 times for 163 yards and a touchdown in the Renegades 36-14 win over Hartington-Newcastle. You may remember that Wagner rambled for 942 yards and 12 TDs a year ago for this same bunch.