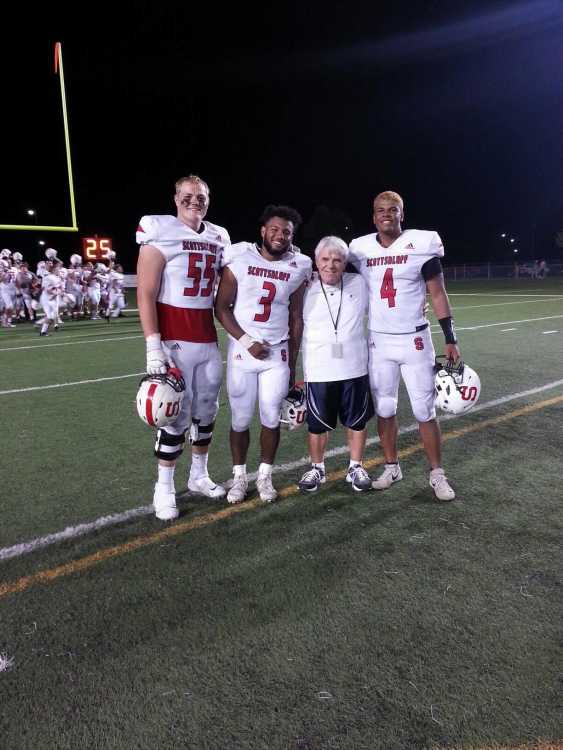 Scottsbluff's Sebastian Harsh burned Hastings with 354 yards of total offense last Friday in the Bearcats 47-12 win. Harsh (#4), pictured on the right, was an All-State defensive end a year ago for the Bluffs.

*Sebastian Harsh-Scottsbluff - Stat lines don’t get much better than the one the 6-3, 225 pound Scottsbluff quarterback put together during the Bearcats 47-12 win over a good Hastings team. Harsh, who was an All-State Defensive End a year ago, carried the ball just 14 times against Hastings, but ripped off 189 yards and TD runs of 77, 19 and 7 yards. The 77 yard blast came on Scottsbluff’s third play from scrimmage and answered an 80 yard touchdown pass Hastings pulled on their 2nd play from scrimmage.

As if that wasn’t enough, Harsh also completed 7 of 10 passes for 175 yards and three more touchdowns. That, friends is 354 yards of offense for Sebastian.

Caleb Walker caught a pair of Sebastian’s scoring aerials covering 40 and 26 yards, while Luke Walker was the recipient of the remaining TD grab that covered 69 yards. Big Sam Clarkson made his first appearance since his sophomore season and was a total force on offense as a vicious blocker and made a brief appearance on defense where he swallowed up a few Tiger running backs for fun.

This 2019 Scottsbluff football team is one scary group. Big, fast and extremely well disciplined. New head coach Jud Hall has things under compete control and I liked the way he handled things last Friday in Hastings. His players really respect him.

*Jaxson Kant, Ben Gebhardt, Cael Wiederin - Lutheran High Northeast - Class D-1’s No.1 rated big dogs ripped up Winnebago 55-22 in a game that was 55-14 at the halftime break. In this season opener for the Eagles, Jaxson Kant and big Ben Gebhardt hooked up for scoring strikes of 55, 42 and 50 yards.

Kant was six of eight passing for 182 yards, and also rushed 7 times for 85 yards with TD runs of 39, 14 and 15 yards. Jaxson also had a 15 yard Pick 6 in the game. Gebhardt also added a 70 yard kick return for a TD for good measure. Big Ben is pretty at that. I watched him take two kick-offs to the house in the playoffs last season against a fine Osceola/High Plains squad.

Cael Wiederin, a 6-2, 145 pound kicking specialist, went 5 for 5 on PAT kicks and booted six of nine kickoffs into the end zone or touchbacks in the contest, averaging 58 yards a boot.

*Wyatt Collingham-York - GOOD bloodlines here. 6-0, 175 junior is always there when Coach Glen Snodgrass and the Dukes need him, it seems. In York’s 14-0 road win at Blair, Collingham picked up a loose fumble in the middle of the 4th quarter and took it 54 yards to the house. The Dukes were clinging to a 7-0 lead at the time.

A week ago in Alliance, Collingham had a 49 yard TD dash to go with an electrifying 94 yard kick return score in York’s 30-9 win. I understand ace running back Jacob Diaz may have been injured in that Blair contest, so Mr. Collingham may pick up some carries at the RB slot this Friday when York travels to McCook.

You may very well be reading about this young man at this time next week.

*Evan Johnson, Leif Spady, Macrae Huyser-Adams Central - No surprise here concerning the Evan Johnson to Leif Spady connection. The pass/catch duo, along with the running of junior Macrae Huyser, made quick work of Milford in the Patriots 42-14 win.

Johnson went 16 of 24 for 170 yards and 4 touchdowns with Spady catching three of the four scoring strikes. Spady caught only 4 passes for 42 yards, but three went for scores as A/C sprinted to a comfortable 35-7 halftime advantage.

The 5-6, 145 pound Huyser, a quick, shifty runner, went off for 159 yards on 18 carries and a pair of TDs in the game. Pretty impressive considering the Patriots have 2 time thousand yard rusher Gabe Conant in that same backfield.

*Cyrus Wells, Jase Leibhart, Seth Miller, -Anselmo-Merna - Wells, a 140 pound sophomore RB, ran for 154 yards on 21 carries and hit paydirt with runs of 1, 6 and 24 yards in the Coyotes big 56-36 win over Mullen. QB Jase Leibhart was also huge in the contest, connecting on 9 of 14 passes for 247 yards and 3 touchdowns. Leinhart also scored on 3 yard run.

Seth Miller had touchdown receptions of 27 and 35 yards, with sophomore Cass McGinn latching on to Liebhart’s third TD pass covering 68 yards. On defense, both Wells and Miller recorded 13 tackles while McGinn and Kade Sefranek each chipped in with 10 against the defending state Class D-2 runner-ups from a year ago

*John Coniglio-Creighton Prep - Senior quarterback made it exciting for the 2nd week in a row as the Junior Jays pulled out another nail biter, this time over longtime rival Omaha Central, 24-20. The rock steady 6-0, 175 pound Coniglio was good on 13 of 20 passes for 166 yards and a pair of touchdowns in the win over the Eagles.

*Nick Halleen-Lincoln Southeast - I rarely say “I told you so”, but this old football guy has been singing the praises of one Nick Halleen since I saw him on opening night 2018. Well, last week in a 28-0 win over Lincoln SW, the hard charging Halleen rushed for 227 yards on 29 carries and scored all four TDs for the Knights.

Nick’s scoring runs covered 6, 7, 8 and 3 yards. Hey, you ride the big horse inside that red zone, folks. Halleen has 342 yards in the young season and is after his 2nd consecutive 1000 yard campaign this Fall.

You also do not want to mess with Keaschall when he’s playing linebacker on defense. He made 12 tackles in the Axtell game to go with the 11 he had the week prior versus Ansley-Litchfield.

*Logan Macumber-Elkhorn - Future Hall of Fame Coach Mark Wortman’s Elkhorn just pounded and pounded the running game in the Antlers 23-14 win over Norfolk, and right at the center of the pounding was senior Logan Macumber. The punishing Macumber ran for 104 first half yards, enroute to 228 yards on 22 carries and a 4th quarter, game clinching 5 yard TD blast.

I like Coach Wortman’s comment after the game that he would have let Macumber run the ball every play had the Antlers not needed him on defense. Love it.

Also have no idea where this dude came from since you mostly hear about Aiden Young, but I have a hunch you’ll be hearing the name Logan Macumber a lot more going forward..

*Tommy Stevens, Zach Smith-Ord - One-Two rushing punch of RB Tommy Stevens and QB Zach Smith was too much for Boone Central/NG, as the Chants took a 37-20 win from the Cardinals.

Both players were leaders on defense as well with Stevens recording 11 tackles, 2 TLF and a sack. Smith was not far off, making 9 stops with one tackle for loss.

This Friday is one of the biggest Class C-1 games of 2019 when Pierce rolls into Ord to play the Chants. Will I be there? Oh yeah.

The smooth quarterback had non-scoring runs of 11, 18, 16 and 18 yards, plus one TD scamper of 47 yards in the win. Not sure how far out Nieman’s second touchdown came from. By the way, the versatile Nieman also does the punting and kicks off for the Vikings.

*Alex Ramos-Lexington - Had 129 yards on 13 carries and a pair of touchdowns in Lexington’s 46-10 win over Schuyler.

……...Next up, Part Two of Friday Night Lights Football Heroes