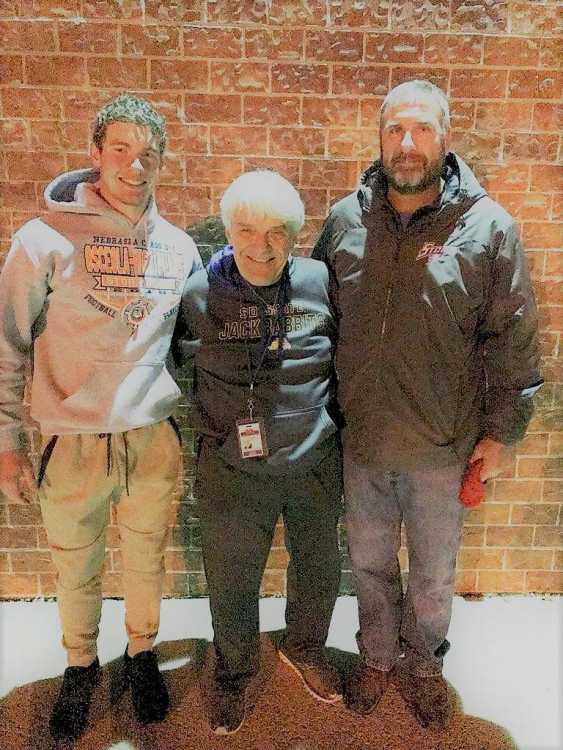 We’re going to slip one in on you here the second one down, because the young man not only came close to rushing for a thousand yards, but is also an extraordinary quarterback when he decides to put he ball in the air down Cambridge way.

The son of former Polk-Hordville great Paul Van Housen and nephew of the great Craig Van Housen and recent Nebraska Eight-Man Football Coaches Association Hall of Famer Dale Van Housen, is a chip off the Van Housen bloodline block, and as good as a player gets in the game of 8-Man football. You can quote me on that one.

The brilliant Keaton Van Housen has not only battled injuries all throughout his career, but played for a High Plains team his freshman and sophomore seasons that fought very low player numbers. Van Housen finally received his break last season when High Plains and Osceola combined forces, but still suffered some serious bumps and bruises that come from a brutal schedule.

On the defensive side, Keaton made 35 tackles, had a pair of INTs and recovered a fumble. He also handled the punting and kick-off chores and I will not make any driving the bus t the games jokes, I promise.

You may be realizing how difficult it was for this lad to pull off what he did those first two seasons at High Plains, but the dude is a Van Housen, man.

Yet, when you add all of Keaton’s yards the past three seasons, that total of 5,588 yards just jumps out and screams at you. We’re talking about a possible 8,000 career yards when Mr. Van Housen’s playing days are over, if he is fortunate enough to stay healthy this year. Wow.

This young man is also next to impossible to stop in any open space, period. Some of the moves I’ve witnessed Keaton make the past 3 years just make my jaw drop, but every time I watch one of his Sports Center highlight, nearly impossible moves, my jaw just returns to normal position and I simply say to the person beside me “simple Van Housen move, nothin’ to it.”

Let’s cross our fingers for a healthy Keaton Van Housen in 2019. He has fellow 1000 yard rusher and first class quarterback, Dylan Soule alongside with a few nice offensive linemen, but will not have head coach T.J. Nielsen, who took a teaching/coaching position at Columbus Lakeview.

Put this guy on a team like a Burwell or Creighton, and Keaton runs for 2,000+ yards.

*Paxton Ross-Cambridge - 6-0, 175, Senior (2,024 Passing yards, 882 Rushing) - I almost feel like I’m turning over a top priority secret to the Nebraska 8-Man football nation, but I guess it’s alright to let the cat out of the bag about the Cambridge Trojan’s skilled quarterback, Paxton Ross.

The teams that dot head coach Rodney Yates Cambridge 2019 football schedule are already preparing for the offensive damage Paxton Ross can inflict on their team’s defense. As for 2nd year coach Yates? All you need to know is that his career record was 83-13 when he pulled into Cambridge and turned the lock to the high school weight room.

And Paxton Ross? Well, he led the Trojans to a “much better than it looks on paper” 5-4 record in 2018. A total of 11 points was the difference between Cambridge being 9-0 and 5-4 a year ago, and they did have a regular season 39-34 win over a D-1 quarterfinal Dundy County/Stratton squad.

Last year the Trojan gunslinger put the ball in the air 180 times, completing 118 of those (66%) for 2,024 yards and 26 TDs. The term Dual-Threat comes into play here, considering the fact Paxton ran the ball 127 times for 882 yards and 13 touchdowns. And talk about consistency, Paxton Ross scored at least one touchdown via the ground and the air in every single game but the playoff loss to Dundy, when he failed to rush for a score.

Now, I want you to consider something. This is not a head to head comparison between Paxton Ross of Cambridge and Baylor Scheierman of Aurora. Can’t do it. Two different situations, but when you divide the number of touchdown passes thrown, into the number of passes completed, you come up with the frequency that a QB throws a TD pass.

Confused? I’ll explain. Last season the spectacular Scheierman completed an unreal 255 of 382 passes for 3,924 yards and 59 TDs. So you divide 255 by 59 and discover Baylor tossed a scoring aerial every 4.3 times he fired a pass.

In comparison, Paxton Ross completed 118 of those 180 tosses for 2,024 yards and 26 TDs. Divide those 118 completions by Paxton’s 26 touchdown passes and you get…….a TD pass every 4.5 times he threw the football. I’d say that makes the Cambridge field general a pretty prolific passing quarterback and his motion and delivery certainly illustrates that fact.

Ross is a very polished 8-Man quarterback, leading his receivers to a spot with fine precision and the ability to get rid of the ball quickly. The kid can throw the football a Furnas County mile and has the QB position intelligence to look beyond his primary receiving target. And…..if Ross decides to abort the throw and take off running, it can be damaging to your defense with Paxton’s speed.

Yeah, No. 11 plays defense, like 68 tackles good, and brings the wood when he hits you. Another plus with the Cambridge senior-to-be is his punting average of 36.8 yards per boot. That kind of yards per punt can be valuable turning the field over, especially in a close game.

So, now you know about Mr. Ross. I also wrote some pre-season words a year ago about a Cambridge freshman named Ethan Sides, who had had 98 tackles his rookie season. Well, last season Sides followed that up with a 109 stops. Just thought I would mention that.

Now you are getting the idea the Cambridge Trojans may make some big noises out there in God’s Country Southwest in 2019.

If you look at his sophomore statistics, Soule was definitely more of a passing quarterback then he was a running QB. Two years ago in 2017, the multi-talented athlete threw for 828 yards and 9 touchdowns, while rushing for just 199 and 2 TDs. Boy, did that ever change in 2018.

Last year, the hard charging Dylan Soule’s role as a ball carrier increased about…..oh, a gazillion times. The Stormdogs QB toted the ball a massive 238 times during the 2018 season, good for 1,089 yards and 23 touchdowns. The passing yards stayed about level with his sophomore season, when Soule threw for 808 yards and 7 scores, but with 20 less attempts in 2018..

Tough to tell what the new coaching staff at Osceola/High Plains will do this Fall as far as run/pass distribution, but Dylan Soule can still fling the football, despite his completion rate dipping in 2018. The dude still owns a career 42% completion rate, which could be better, but I think that number will improve this season. But the fact still remains, this kid is a prolific runner that flat out punishes people at the point of contact.

As far as I was concerned, Dylan just narrowly missed making the Class D-1 All-State a year ago at the linebacker position. 107 tackles with 53 solos and 54 assists will catch anyone’s attention, especially if you saw Soule play in person.

So, here’s the deal about Mr. Soule when he plays defense. If you have the ball and you see a hard charging No. 7 bearing down on you, it’s probably not because he wants to tell you about a cool chick he saw in Columbus. More like “welcome to Stormdog country and you aint gettin’ no yards after contact, Sunshine.”

If I were putting an all-star 8-Man team together in 2019, Dylan Soule would be getting a phone call to play on my defense, I can tell you that. Class D-1 will be hearing more from this gentleman in about a month.

*Connor Floyd-Sutherland - 5-7, 135, Senior (1,196 yards) - Very athletic player who played a big role offensively in Sutherland’s breakout 2018 season that not only saw the Sailors post their first winning season (6-3) since 2012, but their first playoff victory since 2009.

Also must give credit to first year head coach Brendan Geier (Bloodlines baby!) and Connor Floyd’s older bro Bennett Floyd, for that unbelievable turnaround a year ago. I can also assure Bennett Floyd was a special player because I had the pleasure of watching him play in the Sertoma 8-Man All-Star Game in Hastings a month ago. Multi-position whiz for certain.

Just so you know, Connor Floyd is the defending Class D pole vault champion (14’4”) who was also the silver medalist as a sophomore, so you know the dude has terrific upper body strength and very good speed. Honestly, I have not seen aton of film on this lad, but he does draw very high praise from coaches around the North Platte area, as well as opponents who have faced Sutherland.

Last season by the way, was the first time Elmwood-Murdock dropped down to the 8-Man ranks in 25, maybe 30 years.. The result was a 4-4 regular season and a D-1 playoff berth, but it certainly did not help matters any to open the 2018 season with Johnson-Brock and BDS, but it didn’t appear to bother the heat seeking missile defensive type play of Mr Drake Spohr.

The 180 pound destroyer had 13 tackles in that Johnson-Brock opener, then followed that up with 19 crunches against a mean BDS bunch. Now remember, Drake Spohr is also Elmwood-Murdock’s quarterback on offense and returns kick-offs on the Knights special teams.

So, on offense, Spohr threw for 403 yards and 4 TDs, only averaging 8 pass attempts a game, but as a running quarterback Drake was lethal, rushing for 1,126 yards and 22 scores, gaining 8 yards every time he touched the football. The Knights stud also scored a TD every 6th time he carried the pigskin.

The kid has fantastic foot speed on the football field for only being a 4.7 forty man and Drake Spohr not only runs like a madman, shedding tackles right and left, but easily pulls away in the open field. He also has an especially wicked straight arm that has been known to drill opponents helmets into the turf.

I’m lost for words for this guy on defense. The only game Spohr didn’t have at least 13 tackles was in a runaway victory against an undermanned Omaha Brownell-Talbot team.

Otherwise it was 13 v. Johnson-Brock, 19 against BDS, 13 vs.Mead, 15 against Nebraska City Lourdes, 18 against Weeping Water with 5 TFL, 19 versus Southern with another 5 tackles for losses, 23 against Palmyra and 21 in that 68-24 playoff loss to Lutheran High NE.

Honest to goodness, I think Elmwood-Murdock’s Drake Spohr eats two dozen 10 penny nails for breakfast and thats 12 more than Brett Tinker of Pierce. And…. I think Tinker and Spohr should get together, chew on some nails and talk a little football. What say you?

Xavier Perez is a pretty amazing story because last season was his first taste of varsity competition at Elm Creek due the fact he was injured his entire freshman football year. The youngster is really fast, can catch passes out of the backfield, and is a perfect one for one passing with a touchdown. Impressive as well, is the fact Xavier zipped for 1,126 yards despite missing the season opener against Overton.

Perez was also outstanding from his linebacker position where he logged 51 tackles (37 solos, 5 TFL) and recovered four fumbles.

Xavier also handled the punting duties for Coach Dueland and was also the 2nd leading kick return man in all of Class D-1 football, averaging a fat 29.8 yards a return.

Better keep an eye on this 2019 version of Elm Creek football. This 2019 squad has the most returning starters Jayce Dueland has coming back since he started coaching the Buffaloes nine years ago (6 offense/7 defense).