Who is the Best Running Back in the history of Nebraska 8-Man Football? 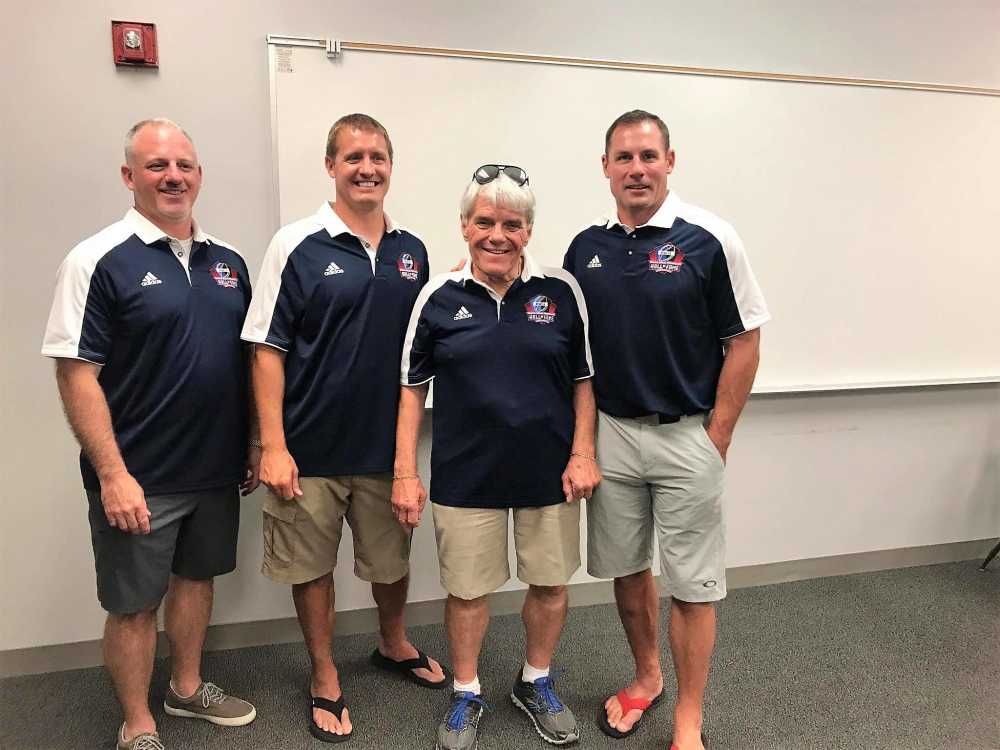 Great question, in fact it’s the question most people ask me when first being introduced. No easy answer to that million dollar inquiry even though I have compiled black and white numbers that reflect who had the most rushing yards in a career.

Many wish it was as simple as seeing which back gained the most yards but there is more to it than a list.

There are so many variables and measures that come into play when determining who is king of that Fantasy 8-Man backfield. But, the list of 5000 yard career rushers is a good place to start.

With the Sertoma Eight Man Coaches Association All-Star football game less than two weeks away, I begin a series of articles leading up to this annual event which will take place Saturday, June 15th at Hastings College.

Here is a list of 8-Man football running backs I have compiled who have rushed more than 5000 yards in a career…..

So, what does this list reveal to us? It tells me that these were exceptional athletes that had at least two seasons of running behind a sensational offensive line. Maybe three. The list shows us a model of consistency, a career full of good fortune as far as the injury bug was concerned, and great coaching for sure.

The 5000 yard list also indicates a run-heavy football program such as Mullen, who boasted four RBs, three of which were coached by Mike Brown, I believe. Howells, under the great Mike Speirs, was another team that rarely through the ball during that terrific championship run. In fact, Mike would have been more than happy to tell you their short list of running plays and which direction they were going.

What the list does not say is how many state championship games the player and his team were involved in. There is also nothing to let us know how many RBs enjoyed a legendary-type two year run, or a 4000+ rushing career.

With all those factors in mind, here is a list of additional names to consider in addition to the 5000 Yard Career players.

*Larry Vlasin-Madrid - One of the most multi-talented athletes in the history of 8-Man football.

*Dale Van Housen-Polk-Hordville - I will till you right now this man will be on my short list. Had his older brother Paul not been playing for during his freshman and sophomore seasons, Dale would have gained a gazillion yards in his career. Won the All-Class Gold Medal in both the Long and Triple Jumps during his career at PH.

*Paul Van Housen-Polk-Hordville - Not as flashy as Dale, but still crushed his way for 2,142 yards his senior season to go with 1,765 the previous year. Older brother Craig was also a 1000 yard rusher at Polk High.

*Billy Legate-Clearwater - Good lord, Legate had be be one of the toughest son of a guns I ever, ever saw play live. One of most feared tacklers in the history of the 8-Man game.

*Nolan Beyer-Sidney St. Pats - Another player in the “tougher than nails” category on both sides of the ball. Was in my 8-Man Hall of Fame class a year ago. Extremely intelligent football player.

*La Vane Johnson-Eagle - A virtual man among boys in the ‘50s. Ended up playing for the Huskers as a lineman. That’s right. Mowed ‘em down like bowling pins when he had the ball.

*Lynn Menke-Marquette - One of Class D’s premier sprinters all the way through high school, 3-time 1000 yard rusher and could run over or around you. Also in my Hall of Fame Class of 2018.

*Craig Hass-Beemer - Bloodlines baby and a Hall of Fame coach in Ron Peck. Thee time thousand yard man who could follow his blockers or make his own path to paydirt.

*Jeff Makovicka and Joel Makovicka, Jordan Makovicka, Justin Makovicka-East Butler - Take your pick, man. At least 13,200 yards amongst the quartet. Jordan, Jeff and Justin were all two-time thousand yard runners. You know the rest after high school. Even Mom had tough as nails bloodlines.

Lane Edis, Wade Edis - Mullen - Only Father/Son 5000 career yard duo in Nebraska prep football history. Lane just completed an illustrious career at Mullen. Wade may have been faster, but Lane had more yards. They can sort this one out. Both are two of the all-time best in the 8-Man game,

*Nate Froeschl, Steve Simon, Chris Carpenter, Nate O’Grady-Falls City Sacred Heart - Any one of these would an outstanding choice. Coaching Legend Doug Goltz would know, but may not tell you. It’s a TEAM thing with Coach Goltz. Any number of other Sacred Heart backs could have made this list. I’ll write more about Doug Goltz in the upcoming days.

*Wes Boals-Homer - Think of a Sherman Tank that could run a :10.8 hundred meters or 22 flat 200. Literally struck fear into the hearts of any defender who entertained thoughts of tackling him. Saw players dive to the ground to avoid being blown up by Boals. Dude was huge and lightning fast when he got rolling.

*Todd Tyler-Hordville - Only thing I can recall stopping this guy was an auto accident during the football playoffs his senior year and then that couldn’t even do the trick. Tough hombre that was a good on the hardwoods as well.

*Scott Shanle-St. Edward - Saw this guy half a dozen times. One of the best ever, period. How does a career with the New Orleans Saints grab ya?

*Jared Minnick, Nate Hass-West Point Guardian Angels CC - Pure, nail-consuming, meaner than heck football players, especially Minnick. That’s the way they do it up there for Coach Dave Ridder. And the result? A nightmare and much pain for GACC opponents..

*Larry Frost-Malcolm - Senior season and Shrine Bowl performance land him on this list.

*Shane Belohrad-Leigh - Real magician when he had a football in his hands. Three time 1000 yard rusher who benefitted from the brutal blocking of fellow three time thousand yard rusher, FB Russ Kuhr. Maybe Kuhr deserves to be listed here.

*Keithen Drury-Blue Hill - I knew this guy was pure gold the first time I watched him play 11-Man FB against Doniphan-Trumbull. Two-time 1000 yarder at Blue Hill……..Two-Time 1000 yard rusher at Dordt College in Sioux Center, Iowa. Senior 8-Man season at Blue Hill convinced me how good he was.

*Ben Hansen-Cedar Bluffs - Trust me on this one folks. Possessed it all from the get-go as a sophomore. Saw him perform as a sophomore, junior and senior. Money on both sides of the ball.

*Jacob Davenport and Jed Fenske-Sargent - Simple as this. These guys were molded into football players in the image and likeness of their coach, Mike Kozeal. Nuff said. Jacob Davenport overcame incredibly scary heart problems to be what he was….state rushing champion his senior season.

*Cort Sheer-Sandhills - Big time rodeo guy in high school and now big money winner on the World Rodeo Tour like Mullen’s Steven Dent. Cort and Steven Dent punished people during the same era, sweeping through the sandhills like a fall tornado. Only difference was Sheer never enjoyed the blocking that Steven did. Rodeo = Exceptional football player by the way.

*Jac Bailey-McCool Junction - Only team I saw anyone come close to nearly stopping Bailey was West Point CC on a night so cold that two pairs of gloves still froze the fingers off as well as another section of the torso. Bailey, a three time 1000 yard rusher, could also nail a field goal from 45 yards away.

*Devin Empfield-Stapleton - Three time thousand yard man that flew under the radar east of Kearney. Dude was good, really good and not that big at all. Swift runner with a huge heart and a motor that never stopped

*Trenton Harbur-Stapleton/Gothenburg - I preached and taught about this guy since his Freshman season. This young man played ,6, 8 and 11-Man football during his high school career and ended up being a star in the Shrine Bowl last Saturday. Unlimited potential, sub 11 flat 100 meters speed and ungodly power. Division One potential and raw, unlimited upside.

*Chad Micek-St. Edward - Youngest of the quintet of famous Micek brothers who all played in the Shrine Bowl. Chad had little blocking until his junior season, then exploded, setting an 8-Man Single Game Rushing Record on the way. Outstanding hurdler on the track.

*Monte Vance-Bladen - Nobody stopped the man with the 10 gallon hat back in Monte’s day. A big cut above most backs back then. Sensational defensive back.

*Trent Geiser, Troy Gilligan, Matt Downey, Craig Downey, Cody Rush-Anselmo-Merna - Coyotes churn out 1000 yard rushers like Omaha Central did back in the day. The I-Back High of 8-Man football. Geiser may be the best of this bunch I saw, but the Downeys (and there are more of them) were no slouches! You could also add the Rush boys, Cody and Colton too. Small frames…..BIG hearts.

*Ken Kaelin, Lance, Pete, Shane, Pete and Phil Rhode-Ansley - Kaelin played at Nebraska…..AND,was their ever an era when Ansley didn’t have a Rhode that was a thousand yard rusher?

*Mat Korth-Greeley - Three time 1000 yard mand and big time wrestler. Greeley had some good ones over the years including Gerald Foltz.

*Matt Korus-Humphrey St. Francis - Huge junior and senior seasons and a state championship get Matt on the list. A player that just glided with smooth moves, making people miss.

…...and, if you didn't see a name on this list you thought was worthy, no worries. This is just page one of a two page list. I thought it would easier to digest in two sections.