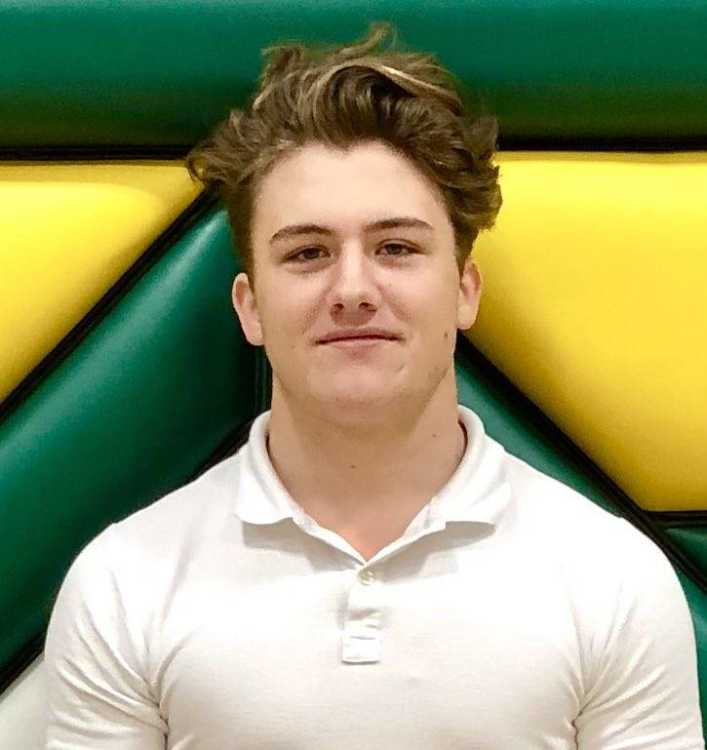 *Ethan Villwok - Archbishop Bergan - Holy Mother-of-Mercy, you don’t want to meet this guy head on for sure. Four Norfolk Catholic defenders found that out during a 59 yard touchdown run down the sidelines last week, in Bergan’s playoff loss to the Knights. Villwok, a 6-0, 200 pound junior who can squat somewhere around 420 pounds, surpassed the 1000 yard rushing with his 97 yards on 14 carries in the 77-32 loss to Catholic.

That enables the sturdy Villwock to conclude the 2018 season with 1,015 yards rushing and 10 touchdowns. Ethan can thank the boys up front, and these dudes can flat out block. That Fighting Knight O-Line consists of Caleb Villwok, Eli Simonson, Jared Gibney, AJ Walter, Riley Lindberg, & Martin Meraz.

*James Burks - Omaha Burke - Bolted 73 yards for a touchdown on the Bulldogs first play from scrimmage in Burke’s 43-20 1st Round playoff win over Papillion La Vista. The senior went on to rush for 212 yards on just 14 carries (15.1/per) and 3 additional touchdowns in the win. Just a week prior, the 175 pound Burks went off for 193 yards on 19 totes and 3 TDs against this same Papio team, as the Bulldogs crusied 42-13 that evening.

James now has 1,549 yards rushing for the season with 23 touchdowns. Just a year ago, the Omaha Burke wrestling sensation ran for1,934 yards and 29 scores. That’s 3,891 career yards on the ground, my friends.

Burke will be at home for the Class A Quarterfnals, facing a 7-3 Lincoln Southeast team the Bulldogs beat 49-28 on opening night at Seacrest Field in Lincoln.

*Cameryn Berry, Paxton Terry, DJ Gross, Morgan Fawver - McCook - Junior Quarterback Cameryn Berry completed 7 of 11 passes for 204 yards and 3 touchdowns in McCook’s 35-7 1st Round Class B playoff victory over Hastings. A pair of Berry’s scoring passes went to DJ Gross (8, 31 yards), while the third one was hauled in by Morgan Fawver, covering 44 yards.

Fawver ended the evening with 3 receptions for 127 yards. DJ Gross caught a trio of Berry aerials, good for 67 yards. Gross also had 6 tackles on defense and recovered a fumble for just another day at Dad’s office.

Paxton Terry had a great rushing night for the Jeff Gross coached Bison, running for 153 yards on just 10 carries (easy math on that one for yards per, kiddies) and scored on a 19 yard run. Cameryn Berry added 88 yards on the ground on 6 totes and a really sweet 55 yard touchdown scamper.

McCook advances to the Class B Quarterfinals, scoring a home field game against 8-2 Waverly and their powerful running attack. Game time is 6:00 pm.

*Ephroen Lovato - Minatare - 6-1, 200 pound 6-Man football stahlwart really exploded in the Indians 81-20 pounding of Walthill in an opening round game of the Class D6 football playoffs. Lovato, a 3-Time 1000 Yard Rusher, set a 6-Man playoff single game rushing record when he ran for a gigantic 397 yards on 19 carries (20.5 per touch) and 7 touchdowns.

Lovato also threw one pass and completed that baby for 33 yards, caught a pair of passes for 42 yards and a score, amd made 9 tackles on defense (4 for losses). That 397 rushing yards gives big Ephroen 1,665 for the season (30 TDs) and 3,894 yards and 80 touchdowns for his still active 30 game career.

8-1 Minatare advances to the 6-Man Quarterfinals and will have a home game versus 8-1 Hyannis Friday at 1:30 MT. Believe it or not, Minatare has not faced Hyannis yet this Fall. Should be a classic Western Nebraska 6-Man football matchup.

*Noah Boersen, Jake Twogood, Toby Watson - Nebraska Christian - The Eagles unleashed a 3-headed rushing monster in their 1st Round Class D-1 playoff win over Ainsworth. The fleet-footed Boersen carried the ball only 9 times in the rain-slick game, but still exploded for 226 yards and 3 long distance touchdown runs, while flashing some blinding speed with nifty, tackle-shedding moves.

Leading rusher Jake Twogood (1,309 yards) added 126 yards on 16 touches and 4 scores, while fullback Toby Watson, who was playing the Wildcat QB position due to an early 1st quarter injury to normal starting quarterback Elijah Boersen, chipped in another 113 yards on 14 totes and 3 more touchdowns.

Nebraska Chrstian advances to the Quarterfinals of Class D-1 and will host 6-3 North Central at 4:30 Wednesday in Central City. In case you missed it, this Nebraska Christian team (9-0) is a well coached, well disclipined football team who could win at least one, if not more playoff games before this post season tournament is in the books.

When you have guys like former GI Northwest super-coach Dave Gee helping out, things are bound to go well. Lest we forget, Gee was part of that legendary Dick Anderson staff that collectively coached Northwest to a couple of Class B state titles, and one season (1981) a #2 ranking in the Omaha World-Herald rankings and a tag of “One of the Best Class B teams of All Time.”

*Tommy McEvoy - Clarkson-Lehigh - Patriot sophomore Tommy “Tom Terrific” McEvoy made his final game of the 2018 season a big one in a 62-34 Class D-2 playoff loss to Hartington/Newcastle. The talented youngster rushed for 233 yards on 32 carries and scored 4 of Clarkson-Lehigh’s 5 TDs. McEvoy’s touchdown runs covered 30, 6, 20 and 9 yards. Tommy was touched only one time during his 4 TD sprints. He also led the C/L defense with 9 tackles.

Is is safe to assume that Tommy inherited all of his talents from his father, Coach Bob McEvoy? Can’t discount Mom, Heather either for that matter. Never know?

*Brandon Blum - Wahoo Neumann - Cavaliers running back turned a mere 10 carries into 183 yards and 4 touchdowns in Neumann’s 42-28 win over Auburn in the opening round of the Class C-1 playoffs. Blum shook loose for scoring runs of 55, 25 and 43 yards in the 1st half, giving the Cavs a 20-0 lead. Blum added a 6 yard TD dash in the 4th quarter.

Bishop Neuman (8-2) will face undefeated Pierce and their trio of 1000 yard rushers Friday in the friendly confines. Gametime is 6:00pm.

*Baily Darnell - Auburn - Ran for 103 yards and a 55 yard touchdown, then returned a fumble 69 yards for another score, in Auburn’s 42-28 loss to Wahoo Neumann. The fabulous Baily Darnell closed out his 33 game career at Auburn with sixteen 100 yard plus rushing games, ending the 2018 season with 1,253 yards and 18 TDs. The splendid Bulldog athlete also caught 21 passes this season for 421 yards and 4 touchdowns, in addition to compilng 1,931 All-Purpose yards. On defense, Darnell made 63 tackles, intercepted a pass and recovered a fumble, returning it for a TD.

For his career, Baily Darnell ran for 3,437 yards, 60 TDs, and 5,079 All-Purpose yards. Throw in 116 career tackles, and you have an Auburn Bulldog football player to be remembered and respected for years to come.

*Jake Hoy, Drew Bippes, Del Casteel - Falls City Sacred Heart - Junior Jake Hoy caught 6 passes for 128 yards and a pair of touchdowns (67, 2 yards) in the Irish 42-0 opening round Class D-2 playoff triumph over Wynot. Senior quarterback Drew Bippes completed 7 of 9 throws in the game for 168 yards, while also runing for TDs of 22 and 2 yards. Casteel, the big 5-11, 200 pound sophomore, scored twice on runs of 9 an 4 yards to help advance Doug Goltz’s 8-1 Irish to a 2nd Round matchup with 7-2 Randolph. Sacred Heart hits the trail for that baby, making the 243 mile road trip to face the Cardinals in an afternoon 3:00 pm kickoff.