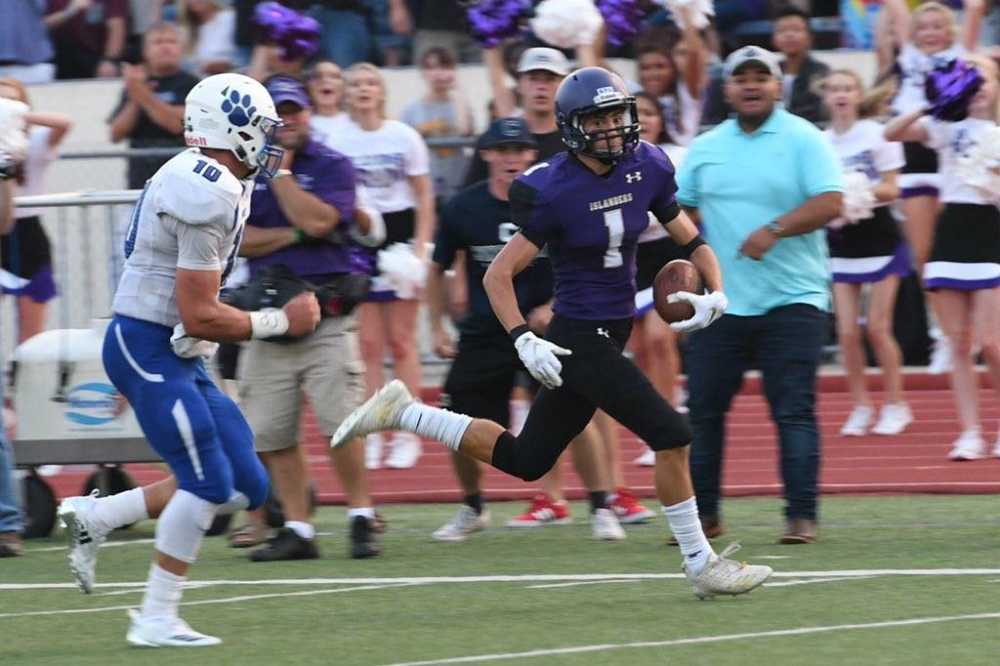 Grand Island Senior High's Broc Douglass (#1 w/football) has established himself as one of the most dangerous return men in Nebraska high school football this season. *(photo courtesy of Terry Douglass)

Today, we lead off our Friday Night Lights heroes blog with a young man that is one of the most dangerous return men in the state, regardless of class. Often times these special teams players do not get their names in the paper or online nearly enough, so I’m going to introduce you to one such player and put him front and center today.

*Broc Douglass - Grand Island - Pulled off a “double-double”, if you will, in the Islanders 21-7 loss to Lincoln Southwest. The slick, 6-0, 160 pound junior caught 7 Carson Cahoy passes for 135 yards and a touchdown, then compiled 135 more yards on 3 lethal kick returns. Broc’s two kick returns in the 2nd half, both over 50 yards, gave Grand Island the field position they needed to make a comeback against the Silver Hawks.

The comeback never materialized, but Broc Douglass once again proved his tag of Most Dangerous Return Man in Class A football. You may get an argument from Papillion La Vista South’s Chase Norblade concerning the kick returns category, but young Broc Douglass is at the top of the Total Returns list with his 576 yards.

With his huge game last Friday, the Islander junior has now accumulated 1,118 All-Purpose yards through 8 games. If you discount quarterbacks and running backs, where a thousand total yards is very attainable if you are a top notch athlete, Broc’s 1,118 yards, which includes: Rushing (37 yards), Receiving (505), Kick Returns (218), Punt Returns (358) and INT returns (0), are way out in front of anyone I saw in the MaxPreps Class A rankings.

And lest we forget, Broc’s Dad, Terry Douglass, was a terrific athlete up at Sandhills high school (Halsey/Dunning) back in the mid-1980s, especially on the basketball court. It’s called bloodlines, baby.

And, of course, we cannot forget the crisp blocking young Douglass receives from those special team guys like Caleb “The Pancake Man” Francl, or Jack “The Hammer” Wemhoff.

So, what makes this GI dude that wears the #1, so dangerous?

I’ll borrow an old Barry Switzer phrase to describe the way Broc Douglass runs after getting the football in his hands……”like smoke through a keyhole”. Switzer, the former Oklahoma Sooner head coach, used that phrase often to describe the running style of the incomparable Barry Sanders.

And there you have it. Carry on your stroll through rare air, Mr. Douglass.

*Cooper Jewett - Elkhorn South - 5-10, 180 pound senior successor to Moses Bryant, ran for 183 yards on just 14 carries and 4 TDs in the Storms 62-20 win over Omaha Northwest. Jewett also caught a 48 yard touchdown in the game that Elkhorn South actually trailed 14-7 after the first quarter.

Cooper Jewett has now gained 859 yards on the ground for super coach Guy Rosenberg’s Storm with 14 TDs to go with it. The quick cutting senior has also proven to be a pass catching threat out of that Elkhorn South backfield, hauling in 15 aerials for 237 yards and a pair of scores this season. Cooper has also logged 41 tackles from his defensive backfield position. Throw in an INT against Lincoln North Star and you have one complete football player.

This young man may have some of the quickest feet in the Metro, with the ability to plant and cut on a dime a split second after taking a handoff, if necessary. The dude can flat out pick ‘em up and lay ‘em down in the open field too.

*Adam Cooper - GINW - 12 carries for 105 yards and 2 TDs, 4 pass receptions for 51 yards and another score, plus a quartet of assisted tackles in the Vikings 42-7 win over Crete. Cooper, whose powerful running will be needed if Northwest is to make a deep playoff run, now has 728 rushing yards with 9 TDs after 8 games.

#6 is also a threat to catch a pass out of that Viking backfield, already reeling in 25 passes for 250 yards and 4 touchdowns. Adam Cooper’s two game stretch against Aurora and Seward that netted 310 rushing yards on 61 totes and 3 scores, proves this tough Viking RB can carry the load if needed and Northwest will need to utilize Cooper’s vast talents in the post season.

*Lane Edis -Mullen - Only needed ten carries to reach 186 yards and a touchdown in the Broncos 46-6 thrashing of Maxwell. Lane “The Bullet Train” Edis now has 1,511 yards with 30 TDs on the season and 5,616 career ground yards with a crazy 121 touchdowns for Class D-2’s #1 Mullen Broncos.

*Trent Reed - Hay Springs - The King of Western Nebraska 6-Man football really cut loose in the Hawks big win over a terrific Hyannis team. Reed carried the football 30 times for 303 yards and 3 touchdowns in Hay Springs exciting 43-32 win over the previously unbeaten Longhorns. The 5-9, 190 pound Reed also threw two touchdown passes, made 8 tackles and intercepted his first 2 passes of the season in that win.

For the 2018 season, Trent Reed rushing total stands at 1,436 yards with 21 touchdowns. Thus far in his three year, 25 game career, Trent has amassed 5,356 yards rushing and 97 touchdowns. Reed’s total career yards, which includes rushing, passing and receiving…...6,776 yards. He has also booted 25 of 32 PATs, which are worth 2 points in 6-Man football.

Not too many football players in Nebraska 6-Man Football that can match the talent level of Trent Reed. Maybe we’ll see you in Kearney, my friend.

*Connor Pohlmeier - Plattsmouth - The Waverly defense may have held the 140 pound junior to 80 yards on 23 totes, but those 80 big ones were just enough to elevate the special Blue Devil RB to an even-steven 1000 Yards on the season. It is just the 2nd time this season a team has held Pohlmeier to under a hundred yards rushing, and when you consider the fact Plattsmouth is just 2-6 right now, hitting the 1000 yard rushing is one whale of an accomplishment.

Connor Pohlmeier becomes the 11th back in Plattsmouth history to surpass that 1000 yard rushing mark. The school record for the most rushing yards in a single season is 1,577 yards, set by Gage Horton in 2015.

*Zander Gray - Omaha North - Big Zander carried the ball 28 times for 240 yards and 3 touchdown runs covering 23, 51 and 21 yards in the Vikings wild 52-49 win over previously undefeated Bellevue West. That gives Gray 1,286 yards with 15 TDs for the season, despite missing one game due to concussion protocol.

In Zander’s 33 game varsity career, the Dancing Bear has piled up 4,462 yards and 60 touchdowns for Larry Martin’s squad. How valuable is Zander Gray to this Omaha North football team?

The game he missed against Lincoln SE, the Vikings had to survive on a pair of field goals to eek out a 6-0 victory over the Knights.

Omaha North’s defense was led by Steven Krawczyk who logged 16 stops (10 solos) and junior Marques Sigel, who had 10. Malachi O’Neal, Aveon Barnes, and Emar Vinson all recorded sacks in the game.

Zavier Betts had a huge night, catching 6 passes for 150 yards. Half of those were touchdown receptions covering 38, 24 and 48 yards. Sean Dailey Jr. actually out yarded Betts with his 6 catches for 157 yards and a 64 yard TD strike from Kieser. Evan Cleveland also got in on the touchdown pass fun with that 48 yard scoring toss to Betts.

The Thunderbird defense was paced by sophomore Ryan Rogers, who made 13 tackles. Caedin Hayes chipped in 10 more stops, while sophomore Jack McDonnell and Logan Bird each recorded a sack. McDonnell also caused a fumble.

*Eli Ahrens - Sidney - Junior running backs 175 yards on 39 carries was more than 3 3 times as many yards as he had gained the entire season before the Red Raiders 14-12 win over Chase County. Former Islander and Sidney head coach Chris Koozer has the Red Raiders at 5-3 right now going into the regular season curtain closer against Mitchell. Nice job Chris!

*Jake Hoy - Falls City Sacred Heart - Scored on runs of 10, 38 and 39 yards in addition to catching a 16 yard touchdown pass from All-State quarterback Drew Bippes. This all took place in the first half of Sacred Heart’s 62-6 win over Pawnee City. Doug Goltz’s Falls City Sacred Heart team is currently rated #2 in Class D2 at 7-0 and are headed for a Thursday night showdown with 3rd rated and 7-0 Johnson-Brock.