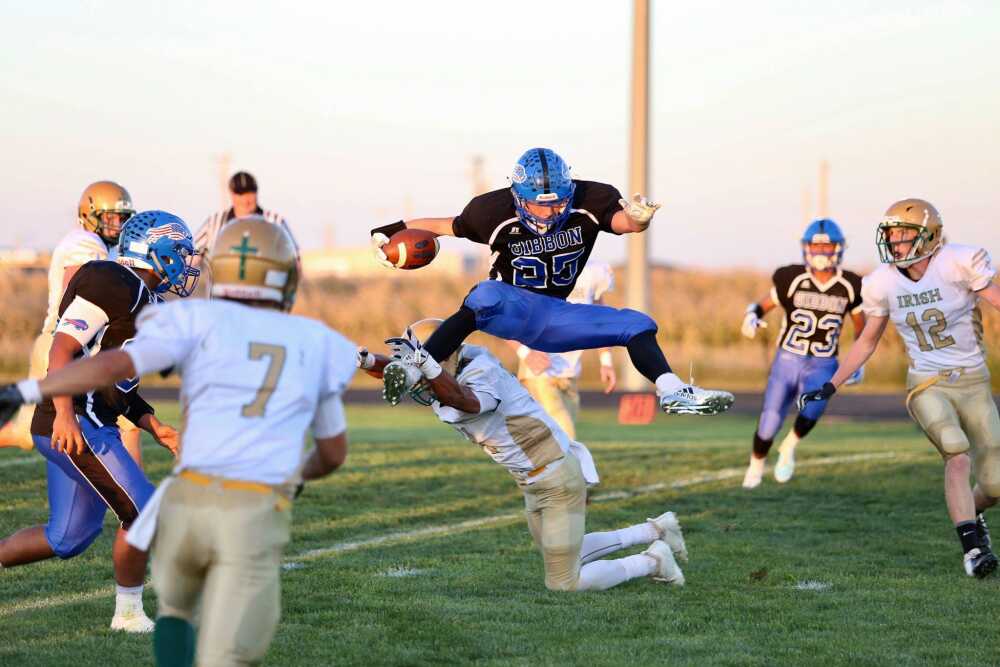 Another apparent State Single Game Rushing record in a month and a half of prep football. That certainly doesn’t happen every year, especially this most recent entry. Gibbon running back Sean Hampton, a 5-7, 150 pound stick of dynamite, cut loose for 422 yards on 41 carries in a 30-18 loss to GICC.

You read that right, a 30-18 loss to the Crusaders. How does a running back bolt for 422 yards, score only two touchdowns himself, and have his team score only 18 points? If you watch the film, it’s easy to see, and you can draw a couple of conclusions from this deal. Either Sean Hampton is not quite an :11.0 flat hundred guy, or those Grand Island Central Catholic defensive backs can close ground in a heck of a hurry..

Irregardless of either fact, Hampton’s 422 yards would eclipse the old Class C-2 record of 414 yards set by the great 3-time 1000 yard rusher, Brett Gumb of Burwell if validated. The record was set in Doniphan back in 2004.

By the time this blog is published, Hampton’s effort may indeed be declared a state record. I will let everyone know the minute the record is declared official. Omaha World-Herald prep sports editor Stu Pospisil and yours truly handle that task.

*Sean Hampton - Gibbon - As mentioned above, the Gibbon sophomore appears to have set a Class C-2 State Single Game Rushing Record with his 422 yards on 41 totes, plus two touchdowns, in a 30-18 loss to GICC. The highly athletic Hampton, also a head hunting linebacker, had a pair of touchdown runs, one of 74 yards, the other a one yard smash that followed a 79 yard run from the Gibbon 20 to the Crusader one yard line.

What are the chances that a running back would gain 422 yards for a team on the losing of a 30-18 score? Even more bizarre is the fact this youth driven Gibbon football team is currently 0-8. But peering deeper into this entire situation, one can realize how this a 422 yard rushing night could actually be possible.

First of all, Head Coach Mark McLaughlin is one of the best in the business. In a town the size of Gibbon, you simply have rebuilding years, and bouncing back and forth between Class C-1 and C-2 doesn’t help matters

McLaughlin though, has rebuilt a Gibbon program that had made only 2 playoff appearances in 21 years prior to his arrival. Mark took over in 2009, and in only one year had the Buffaloes finishing with a 6-2 record.

Even when McLaughlin’s teams are not winning consistently, the brilliant coach usually has a couple of All-State calibur players…..like Sean Hampton.

Young Mr. Hampton can run, folks He has terrific instincts for a sophomore, makes smart running decisions, and can cut on a dime. The lad is a great leaper and visualize situations before they happen, but he is young and not without fault. The afternoon I saw him, the poor kid had the ball ripped out of his hands three times, losing all three. But Hampton kept the faith, forged ahead, and ran like the wind to an apparent state record last Friday on Northwest’s football field.

The second half, Hampton went off for 213 yards on 20 touches with runs of 47, 8, 79, and 22 yards in the mix. The 79 yard burst stretched from the Gibbon 20 to the GICC one yard line before the sophomore was run down from behind.

*Cedric Case - Lincoln High - Zoomed past the 7,000 yard passing mark with his 27 of 33 for 375 yards night in the Links 66-31 win over Kearney. The North Dakota commit connected with Jaden Horton for three TDs (20, 31, 29 yards) and found State Hurdles Champion, Darius Luff for a fourth aerial touchdown, a 29 yard scoring strike.

That gives Cedric 2,149 yards through the air this season, with 21 TDs and only 5 INTs. The dude is deadly accurate, like 70% of his 220 passing attempts accurate, this year. For his illustrious career: 487 of 709 passes for 7,278 yards, 75 TDs, 14 INTs. And through all those times handling the football on nearly every single Lincoln High snap……….Cedric has fumbled the ball ONE time, his sophomore season.

The kid should be the spokesman for the AllState Insurance company.

*Isaiah Alford - Lincoln High - The senior classmate of Cedric Case carried 32 times for 284 yards and 4 touchdowns in that same 66-31 win over Kearney last Friday. The shifty Alford slipped away for TD runs of 22, 5, 4 and 2 yards in the Links 678 yard offensive explosion.

*Joe Miller - Omaha Northwest - This guy has to be incredible. In 8 games, Miller has run for 1,394 yards on 140 carries with 17 touchdowns for a 3-5 football team. Last Friday, despite losing to Elkhorn South 62-20, the long-striding, hard hitting Huskie reeled off 177 yards rushing and two TDs, one a 56 yarder.

If you throw in two games when Miller was held to 59 yards by Omaha North and a meager 25 by Westside, it’s even more amazing. The Omaha Northwest senior has a pair of 300+ rushing performances and a 229 yard output to go with those two small totals.

If this guy is healthy, I’m taking the trip to Columbus this Friday to see him play the final game of his career. Joe Miller needs 191 yards against that Columbus team to become Omaha Northwest’s all time single season rushing leader. That would break the 27 year old record of 1,584 yards, set by former Husker Damon Benning back in 1991.

*Dex Larsen Blair - 5-9, 195 pound sophomore ran for 215 yards on 31 totes and 8 yard TD run in the Bears 47-21 win over Bennington. That makes 583 yards and 4 TDs the past 3 weeks for young Larsen. Dex, who has pretty good football speed, raised his 8 game season rushing total to 961 yards with 10 touchdowns going into the Bears regular season finale at Omaha Roncalli.

*Wyatt Ehlers and Jackson Hirschfeld - Centennial - QB Ehlers and WR Hirschfeld took their pass and catch touchdown clinic to David City last Thursday, coming away with a 41-7 victory. Just to demonstrate how it’s done, Wyatt hit Jackson with 4 touchdown passes, covering 15, 27, 31, and 11 yards in the win.

Ehlers ended the chilly night by hitting 15 of 26 passes for 287 yards and those four TD aerials to Hirschfeld. Jackson had a couple of other receptions, giving him 6 for the game and 140 yards. Both had 3 tackles apiece on defense.

Wyatt Ehlers increased his 2018 passing yards total to 1,546 yards and 2 TDs with a completion rate of 66%. And…….you don’t want the dude to run the football either. The 6-1, 185 pound senior has bolted for 456 yards and 6 touchdowns on just 63 carries in 8 games this Fall. In my book, that rushing total is certainly enough to list Wyatt as a Dual-Threat quarterback.

Jackson Hirschfeld has averaged 8 catches a game this season for the Class C-2, #1 Broncos, pulling in 64 aerials, good for 887 yards and a dozen scores. You want to know how good this young man can play wide receiver? In the Aquinas game, a 28-21 Centennial conquest, Jackson caught 17 passes for 229 big ones and 3 TDs. Seventeen receptions. That’s crazy, especially against Aquinas.

Just for the record, Ehlers and Hirschfeld have hooked up for 2,255 yards and 28 TDs the past three seasons. S’pose they have ever worked on this during the summer months?

*Trevor Pfeifer - Humphrey St. Francis - 6-3, 200 pound junior quarterback was instrumental in helping the Flyers end Riverside’s 43 game win streak last Friday. In the 44-38 victory over the mighty Chargers, Pfeifer rushed for 136 yards on 17 carries while scoring touchdowns on runs of 45, 24, 2 and 8 yards. Trevor also completed 4 of 7 aerials for 106 yards and a score.

*Dylan Kautz - Norfolk Catholic - The incomparable Knights senior ran for 179 yards and four touchdowns covering 15, 15, 25 and 7 yards in Catholic’s 56-12 win over an injury depleted Stanton team. That increases the 4-Time 1000 Yard Rusher’s 2018 total to 1,579 yards and his career rushing yardage mark to an 6,418 yards (72 TDs). That puts the amazing Kautz 6th on the All-Time Career Rushing List, 62 yards away from 5th place Trevor Nichelson of Ashland-Greenwood.

*Gabe Conant - Adams Central - Junior back ran for 84 hard earned yards on 23 carries in the Patriots 42-33 win over a tough Kearney Catholic squad. Conant, who had a 2 yard TD run in the contest, increased his 2018 rushing total to 1,026 yards. This was a huge game all around for Adams Central. QB Evan Johnson completed 11 of 22 for 218 yards and 4 TDs and rushed for another 76 yards on 7 touches with a sparkling 70 yard scoring run in the mix.

Three of Johnson’s touchdown passes were hauled in by Leif Spady (9, 13, 35 yards), who had a dozen receptions for 110 yards. Eli O’Dey had the other scoring catch of 30 yards. Big tackle Landon Weber led the Patriots “D” with 12 stops, with Riley Eckardt following closely behind with 10 tackles.

*Linden Howe - Kearney Catholic - As long as we’re talking about Adams Central and Kearney Catholic, better mention this tough-as-nails Star. The 5-8, 200 pound RB/MLB rambled for 229 yards on 33 carries and 4 TDs in the loss to A/C. Howe hit paydirt with runs of 62, 3 and 2 yards, but also caught a 30 yard scoring strike from sophomore QB Heinrich Haarberg.

Linden also made 10 tackles on defense (80 for 2018) for the 3-5 Stars. Howe, who is a solid All-State candidate at the linebacker position, has now rushed for 974 yards in 8 games. Linden will need 26 yards against Holdrege in the regular season curtain closer, to reach the coveted 1000 yard rushing mark.

*Hunter Cole - McCool Junction - In essentially one half of football (two 10 minutes quarters in Six-Man), the bruising 175 pound Cole ran for 163 yards on just 12 totes and 6 touchdowns in the Mustangs regular season finale 69-8 win over Dorchester. The Mustang senior had scoring runs of 5, 59, 21, 40, and 15 yards plus a 21 yard fumble return for the 6th TD. That increases his season rushing total to 1,122 yards with 26 touchdowns.

McCool Junction, currently rated #7 in the World-Herald Six-Man ratings, has adjusted well to the much quicker 6-Man game since dropping down from the 8-Man ranks. The Mustangs will be idle this week and await the word on where they will be seeded in the upcoming NSAA controlled 6-Man playoffs.

*Michael Rutherford, Josiah Ohlman - Central City - QB Rutherford and WR Ohlman hooked up for scoring passes of 35, 63 and 31 yards in the Central City’s hair-raising 21-20 victory over a 1-7 Fillmore Central team. It was an especially big night for the junior Josiah Ohlman, who had 122 receiving yards and no touchdown catches coming into the game.

*Jacob Stoner - Fillmore Central - 5-10, 165 pound sophomore notched his first 100 yard plus rushing game of the season when he broke loose for 155 yards on 23 carries in that 21-20 loss to Central City. Stoner, who rambled for 740 yards as a freshman for the Panthers, increased his 2018 rushing numbers to 534 yards and 4 TDs. Fillmore travels to winless Fairbury this week to close out the 2018 season.