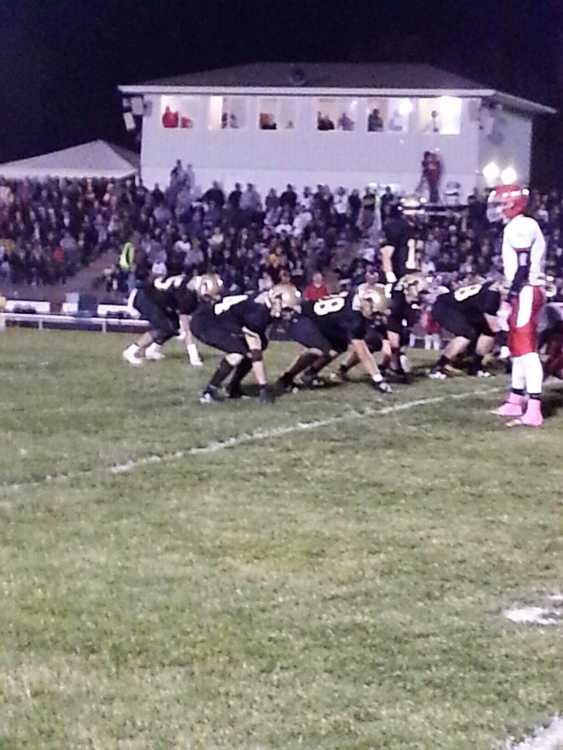 The Aquinas offense (Black/left) is starting to roll as playoff time approaches. That, along with the stout Monarch defense, makes this a very dangerous team this time of year. *(photo by 1000 Yard Guy)

And you may recall that Ron Mimick’s offense lost potential All-State RB Travis Roh in the summertime with a horrible back injury and another fine two-way player, Miles Eggleston, who suffered a broken foot against Norfolk Catholic on August 31st. And lest we forget, Eggleston was a killer linebacker, who logged 72 tackles in 2017.

Speaking of North Bend Central’s Austin Endorf, you know, the Tiger quarterback who has thrown for 1,749 yards and 18 scores thus this season? He may want to put the Aquinas game in his rear view right now.

The Monarch defense limited Endorf to 13 of 25 passes for a meger 98 yards zero TDs in that 52-14 spanking. Kind of appears that this Aquinas bunch is gearing up for a playoff run to this guy. I’ve only seen that happen one short of a gazillion times in the past.

Bryce Zimmerer - Creighton - Sensational Bulldog back roared for 292 yards on 22 carries and 5 TDs in Creighton’s 56-6 win over North Central. Zimmerer, the 3-time 1000 yard rusher, scored on runs of 45, 65, 9, 34 and 38 yards in the blowout win. Bryce Zimmerer has already rushed for 1,440 yards on just 110 touches and 26 touchdowns this season. The amazing Zimmerer has now amassed 4,315 yards in his career up there in Creighton. Good Lord.

*Will Gatzemeyer - Bancroft-Rosalie/Lyons Decatur - 5-10, 175 pound junior Dual-Threat quarterback was huge as usual in BRLD’s 56-20 win over Louisville. Gatzemeyer ran 19 times for 144 yards and 4 touchdowns, completed 3 of 6 passes for 106 yards and 2 more scores, made 5 tackles on defense, caused a fumble and intercepted a pass.

*Cedric Case - Lincoln High - North Dakota commit was a perfect 8 for 8 passing for 104 yards and 2 TD passes in the Links 56-14 win over Omaha Benson. The 195 pound senior gunslinger hit Morgan Perry iii for a 33 yard scoring strike, then connected with AJ Jones for a short 4 yard touchdown.

The Lincoln High ace has 27 games under his belt through the better part of 3 seasons. Here is what he usually produces in a normal night’s work….17 of 25 passes for 256 yards with an average of 15 yards a completion, with at least 2 touchdowns, plus a very good chance he will not throw a pick.

The Links are currently 5-2, rated #5 in Class A, and have remaining regular season matchups with Kearney and Lincoln SW. Tough way to close, but that means a full game for Cedric Case in his last 2 regular season outings. More minutes mean more yards and more touchdowns for this dude.

*Drake Adams - Southern - 6-3, 185 pound Dual-Threat QB was outstanding in the Raiders 40-12 conquest of Elmwood-Murdock. Adams connected on 7 of his 14 passes for 192 yards, which included a 60 TD toss to favorite target Nick Lyons. Drake also toted the football 17 times for 102 yards and scored four times on short bursts of 3, 2, 2, and 2 yards in the win, Southern’s second of the year.

Drake Adams has thrown for 800 yards and 11 touchdowns, rushed for another 546 yards and 14 scores, made a huge 67 tackles on defense with a fumble recovery and an INT thrown in there. Pretty salty stats for a guy that plays on a 2-4 football team.

York Head Coach Glen Snodgrass turned to the run game in the 4th quarter, leaning on son Garrett, who scored on runs of 7 and 2 yards, to salt the game away for the Dukes. That gave young Snodgrass 84 yards on 24 carries for the night.

*Carter Terry - Northwest (Grand Island) - Record setting quarterback nearly picked himself another plum in the Vikings 35-19 loss to York last Friday. The skillful Terry, who already holds Class B records for Most Passing Yards in a Season (2,724), Most Touchdown Passes in a Career (57) and Most Touchdown Passes in a Season (Tied with 33), crept closer to the big one…….Total Offense (Passing + Rushing) in a Career.

Carter completed 19 of 36 passes for 171 yards and one TD in that loss to the Dukes. That gives the masterful Viking senior 6,829 yards of Total Offense, just 10 yards shy of Northwest’s Christian Ellsworth, who holds the Class B record of 6,839.

*TJ Williams - Grand Island Heartland Lutheran - Ran for 130 yards and scored on runs of 13, 1 and 56 yards in the Red Hornets 44-27 win over Dorchester. The speedy Williams also returned a Dorchester kickoff 65 yards for a TD to seal the win, Heartland Lutheran’s third of the season against 3 losses.

*Jacob Keiser - Hartington Cedar Catholic - Jim-Dandy junior bolted for 170 yards on 20 carries and 2 TDs in Cedar’s 40-12 win over Crofton. The hard-nosed Keiser hit paydirt on runs of 41 and 6 yards in the game, increasing his season rushing total to 1,040 yards (10 TDs). And those yards come with a lot less blocking than he had a year ago when he ran for 1,437 yards. Remember, the Trojans lost 7 offensive starters to graduation coming into the 2018 season, returning only 3 seniors.

Jacob Keiser is also a busy man on game nights, playing full time defense (36 stops this year to date), doing all the punting and also returning both punts and kickoffs. This young man is truly one of the finest all-around football talents in Class C-2.

*Josh Bailey - Johnson County Central - Long striding senior RB rushed for 115 yards on 26 carries and a score in JCC’s 12-8 loss to Freeman. Not a ton of yards, but considering the fact he has rushed for over 100 yards 11 of his last 16 games for a team that has gone 7-9 in that time span, I’d say Bailey is doing alright.

Oh, I thought I would mention his 2018, seven game rushing total of 1,422 yards is 22 yards clear of anyone else in 11-Man football in the state, and that includes Norfolk Catholic’s Dylan Kautz, who has 1,400 even so far.