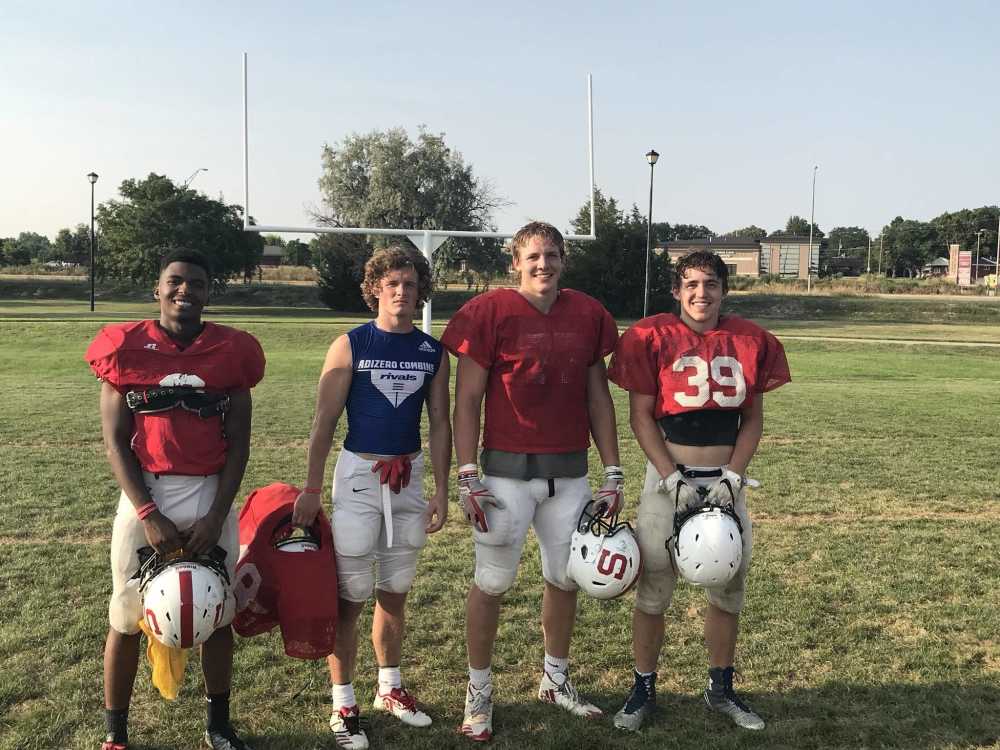 The Bearcat “D” was so efficient that it held a GINW team to 67 yards passing, and a minus 13 yards rushing. 54 yards of total offense for a team that came into the contest averaging 467 yards a game. Think about that.

The mind boggling fact about that game, was the fact Scottsbluff still trailed Northwest 10-7 at the half, yet still came back to beat the Vikings 25-10. Record setting GINW QB Carter Terry was held to those 67 yards through the air and was sacked twice. The Bluffs defense recorded 6 tackles for losses in the game as well, and forced the visiting Vikings into an 0 for 9 night on third down conversions.

Meanwhile, the Bearcats made some halftime adjustments, which resulted in 18 second half points. 1000 yard rusher and State 1000 Meter champ Chris Busby ran for 125 yards and a pair of touchdowns (2, 3 yard runs), but it took 32 carries for Chris to grind out those yards against that stingy GINW defense.

Makes you wonder how good this Scottsbluff team must be? I know they have depth and starting team talent, so that regular season finale versus McCook gets bigger by the week. And GI Northwest is certainly not as so-so as they looked against this Bluffs squad. When you play McCook, Scottsbluff and Aurora back-to-back-to-back in weeks 2-3-4, it takes a toll on you.

Don’t give up on those Vikings just yet.

*Isaac Wahls - Loomis - All I can say is RB Isaac Wahls must like playing the quarterback position. Filling in for injured freshman QB Shay Swanson, the 5-10, 153 Wahls accounted for Ten Loomis touchdowns in the Wolves 74-34 win over Blue Hill last Friday.

First and foremost, Isaac broke the school record for most rushing yards in a game by erupting for 366 yards on 22 carries and 8 TDs. The “substitute” QB scored on runs of 13, 7, 1, 4, 9, 22, 45, 59 and 72 yards. Oh no, he wasn’t finished for the evening, folks. Sir Isaac Newton, I mean Wahls, thought he might just test the old arm out on a couple of forward passes in the game. The result; three pass attempts...two completions….two touchdowns. The TD tosses went to Payton Schultz (4 yards) and Andrew Dennis (18 yards). And speaking of Payton Schultz, he was certainly no slouch in the game either. All he did was rush 22 times for 157 yards, just part of the Wolves 628 rushing yards for the night.

Okay, so how talented is this Isaac Wahls dude? As a freshman, the kid ran for 502 yards in 7 games. The following season as a sophomore, Isaac goes off for 1,099 yards and 17 TDs. The lad is all set for an explosive junior season in 2017, carries the ball 4 times against Axtell and is lost for the entire season with an injury. And you wonder why the Loomis star rushed for 366 yards in a game this year.

So far this season, Wahls has sprinted for 533 yards on just 50 carries and 11 scores. Keep an eye on this young man for the remainder of the 2018 season. So far in 2018, this is just a real “feel good” high school football success story.

*Cameryn Berry, Paxton Terry, DJ Gross - McCook - Trio came through big in McCook’s 20-13 win over previously unbeaten York. The polished Berry completed 7-11 passes for 109 yards and a touchdown in a tough defensive battle. The junior QB also ran for 65 grueling yards on 18 carries, plus running the Bison offense like a seasoned pro.

Fullback Paxton Terry gauged the Dukes middle for 97 yards on 12 totes, including a damaging 46 yard run right up the gut. And DJ Gross? The all-state LB made 11 tackles despite missing some time with a leg injury. Just another day at the office for Gross.

*Jame Burks, Nick Henrich - Omaha Burke - Bulldog senior star, one of many on this Burke squad, tore up Omaha Central on the ground with his 180 yards on just 12 touches in the 35-7 win last week. Burks hit paydirt with runs of 18, 2 and 76 yards and was a force on defense as well. The 170 pound do-it-all senior made 9 tackles, 2.5 of which were for losses. He also batted away a pass and returned a trio of punts for 61 yards in the win.

That stout Burke defense recorded 13.5 tackles behind the line of scrimmage against Central, and were led by Nebraska commit Nick Henrich, who literally destroyed Eagle ball carriers with his 16 stinging tackles. 12 of those were solo stops in the “Excedrin headache” category and 4.5 were TFL. Henrich, Caleb Robinson and Creighton Kimnach all recorded sacks in the game.

*Brayden Miller, Seth Stroh - Kearney - Two Bearcats hooked up for a pair of scoring passes in Kearney’ 31-16 win over Norfolk. Miller spotted an open Stroh for a 30 gain, then on the very next play, hit him with a 12 yard TD strike. Later, Brayden hooked up with Seth for a sparkling 33 yard scoring pass. Miller has thrown for 466 yards and 5 TDs this season, while Stroh, the junior who missed all of 2017 with a wrist injury, has 12 receptions for 260 yards a 5 TDs thus far in 2018.

*Baylor Scheierman - Aurora - Followed his record setting 8 touchdown night by completing 28 of 38 passes for 431 yards and 7 TDs in a 55-21 win over a tough Class C-1, 3rd rated Wahoo squad. Scheierman hooked up with Jordan Stevenson for touchdown tosses of 8, 23 and 33 yards, hit Cy Bullerman with a 32 yard TD, Rylan Willis with a 16 yard TD, connected with Cade Reichart for a 32 scoring strike and finally hit Kade Moural with a 12 yard TD pass.

Stevenson led all Huskie receivers with 11 catches for 198 yards. Cy Bullerman also surpassed the 100 yard receiving mark with his 6 catches for 106 yards.

*Thomas Waido - Wahoo - The Warriors lose to Aurora 55-21, but QB Thomas Waido certainly never threw in the towel. The 6-1, 170 pound junior hit 15 of 26 passes for 247 yards and three TDs in the loss. Trev Luben also contributed to the cause with his 115 rushing yards on 24 carries. This is still a terrific football team, friends.

Jacob’s “little” bro, 6-2 Freshman Isaac Herbek, caught 3 passes for 96 yards. Two of young Isaac’s three receptions went for scores, including his sensational 27 yard “Hail Mary” catch with just 4.5 seconds remaining. Isaac, who had never caught a varsity pass, had a hand in his face and was just a few feet away from being out of the end zone when he made the miraculous reception.

The Crusaders are now 3-0 on the season after being winless a year ago. Some coaching job by former GICC player, Tim Dvorak.

*John Reilly, Cole Evans - Grand Island - Reilly provided the ground attack, Cole Evans the aerial show and the Islander defense did the stuffing in Grand Island’s 42-14 win over Papillion LV. The hard charging Reilly rushed for 128 yards on just 13 touches and two touchdowns (12, 8 runs). Cole Evans was highly efficient with his 11 of 14 passing for 137 yards and a 21 yard scoring strike to Keyin Wentling.

*Jake Jarzynka - Ravenna - This QB has the Ravenna Bluejays crankin’ in 2018. In a 62-56 win over highly regarded Osceola/High Plains, Jarzynka completed 9 of 18 passes for 127 yards and two TDs. Drew Bolling (23 yards) and Jake Drahota (37 yards) were the recipients of Jake’s touchdown tosses.

Jarzynka also rushed 13 times for 54 yards and an additional three TDs on runs of 2, 1, and 12 yards. Drew Bolling, however, led Ravenna’s ground attack with 138 yards on 15 touches and a score. Trey Meith buoyed the Bluejay defense by picking off two passes. This resurgent, 3-0 Ravenna squad is now rated #10 in Class D-1.

*Zander Gray - Omaha North - Honestly, I wonder if any defense can hold big Zander under 100 yards? Even with an inexperienced offensive line, Zander rushed for 230 yards on 29 carries a pair of touchdowns in last Thursday’s 28-14 loss to Millard West. Gray has already run for 589 yards and 6 TDs this season and 3,765 yards and 51 TDs in his 29 game career for Coach Larry Martin at Omaha North.