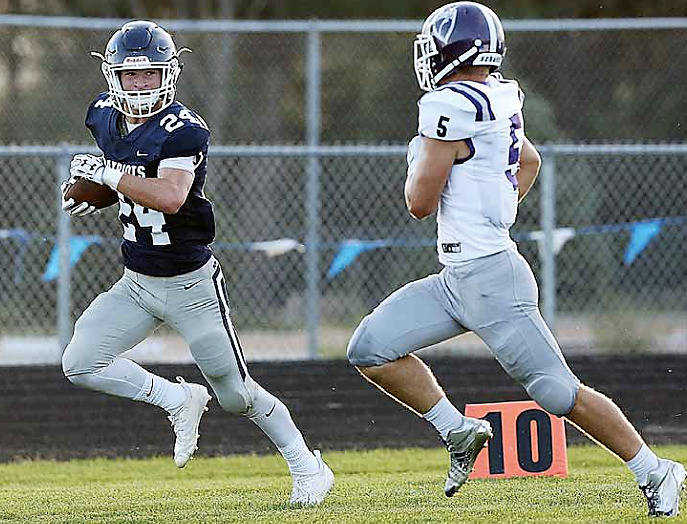 *Gabe Conant - Adams Central - I knew it wouldn’t be long before this 5-10, 165 pound gridiron star exploded this season. The speedy Conant, who rushed for 1,052 yards a year ago as a sophomore, ripped through Milford for 338 yards on just 20 carries and 4 touchdowns in the Patriots 40-29 victory.

It was a night of long distance gains for the A/C junior, including touchdown jaunts of 30, 64, 34 and 8 yards, plus non-scoring dashes of 35 and 19 yards. Gabe Conant was just simply unstoppable when he made the corner. When the play was up the gut, the Adams Central offensive line created openings and once Gabe was past that line of scrimmage, it was like a highlight reel and a clinic of every conceivable move a high school running back could make. A thing of beauty it was.

The talent was definitely there a year ago for Gabe Conant. I witnessed it the first time I watched him play. But like any rookie, there were extra jukes and cuts that were not necessary at times. It’s part of the learning experience for any RB with high natural ability….cutbacks to the inside when you should have kept cruising down the sidelines and trusting your speed. All the normal stuff. It’s okay.

Not this season. On film, it appears that young Conant has matured a bunch, and the bad news for opponents…...338 yard rushing games like this one. Not gonna happen every time folks, but I can promise this young man is poised for big season in 2018. And remember, Conant can catch the football out of the backfield too. Stay tuned, and throw out the loss to Aurora, who is simply that good.

*Evan Keiser, Jevyon Ducker, Justin Chaney, Zavier Betts - Bellevue West - This quartet did about everything you could imagine in the Thunderbirds 81-6 shellacking of Bellevue East. Evan Keiser, who started at Quarterback in place of Jacob Coldanghise, completed 10 of 15 passes for fat 221 yards and 4 TDs. Keiser, who played wide receiver a year ago, fired 3 of his 4 TD passes to junior Zavier Betts. The sensational Betts scoring receptions covered 22, 24 and 48 yards. The 4th TD reception of 25 yards was reeled in by 5-9, 170 pound senior Shane Smith.

And of course, star junior running back Jevyon Ducker did his normal gig, rushing for 153 yards on 14 carries with touchdown runs of 18, 4 and 46 yards, and senior Justin Chaney (#28 if you were watching) literally came out of of nowhere to run for 159 yards on just five carries and three TDs. Huh? That’s 31.8 yards a pop, Bubba.

Chaney, who ran for 99 yards in all of 2017, broke loose for scoring jaunts of 85, 62 and 9 yards in the route. And I certainly do not have to tell you how well those Thunderhogs handled that offensive line blocking, do I? Didn’t think so.

*Chase Perchal, Isaac Harris, TJ. Urban - Millard South - Yutan transfer Chase Perchal must have liked suspense last season when his former team won the Class C-2 state football title. Last Friday, the 5-11, 180 pound junior lined up in single safety to receive a Lincoln Pius X kickoff after the Bolts had just taken a 39-35 lead. The clock showed 22.9 seconds and Chase Perchal must have felt the weight of the entire Class A football world on his shoulders.

Anyway, the Pius kick took a nasty hop at the 14 yard line, Perchal let it slip through his hands, chased it, then picked it up back at the nine. By that time the Pius kickoff team had overrun the ball a bit. Chase then scooped up the ball, started toward the near sideline, cut back inside, then proceeded to sprint 91 yards down the middle of the field for the winning touchdown.

RB Isaiah Harris, who dazzled fans with his 201 rushing yards a week ago in his first start, came close to duplicating that feat when he fired for 195 yards on 24 carries and TD runs of 4, 4, and 64 yards against the Thunderbolts. 396 rushing yards in your 1st two games as a starter….not too shabby, Isaiah.

And then there’s much ballyhooed sophomore QB T.J. Urban. The son of former Class of ‘96 Husker Noland Urban (Osceola), not only scored the first touchdown of the game with his 12 yard dash, but continued on to run for 85 yards on 16 carries. The young Urban was also perfect in his passing game, hitting 4 of 4 aerials for 69 yards.

*Isaac Dannehl - Ralston - The 6-1, 175 senior quarterback/free safety is part of the Rams surge to a 2-0 start. In last Friday’s 42-6 spanking of South Sioux City, Dannehl ran for two scores and passed for three others. Isaac’s TD runs covered 8 and 17 yards, while his TD tosses were fielded by Noah Oellerich (37 yards), Michael Heig (33 yards) and Jahrran Paces (9 yards).

*Kaleb Conoyer, Rhett Jordan - Waverly - QB Jordan and bruising RB Kaleb Conoyer are part of Waverly’s potent Wing-T ground attack that really stood out in the Vikings 45-14 win over Bennington last week. Conoyer, who runs like a wild stallion, led the way with 183 yards on 26 carries and TD runs of 38 and 5 yards. Rhett Jordan added 130 yards on 13 touches and a sparkling 59 yard TD scramble run coming out of the backfield when all of receivers were covered. The slick Waverly field general also completed 8-13 passes for 109 yards and a pair of scoring passes to Jay Adams.

Mason Nieman also scored on a 66 yard end around run where the 6-1, 190 pound junior displayed some brute force and speed as well. Ethan Karstens also showed some speed and power on a 50 yard scoring run, part of Waverly’s 536 rushing yards for the night.

This Waverly team may just be one of the most physical teams I’ve seen this year, and has overall speed to burn as well. Keep a close watch on this bunch.

*Baily Darnell - Auburn - This young man’s performance against Fort Calhoun pretty much illustrates his vast talents on the football field. In the Bulldog’s 45-0 win over the Pioneers, Darnell rushed the football 7 times, averaging 31.3 yards a tote. 3 of Baily’s 7 carries went to the house on trips of 28, 67, and 91 yards. The 6-1, 185 senior, who has run :11.08 and :22.46 in the sprints, also caught touchdowns passes of 38 and 55 yards from QB Drew Dixon in the route.

I’m pulling for Baily Darnell, who was rolling along last season with 1,156 yards rushing and 20 TDs before separating a shoulder in game 8 vs. Syracuse. The 8-1 Bulldogs could have used Darnell in that playoff loss to eventual C-1 runner-up Boone Central/NG.

*Kaden Guerrero - Southwest - In that 50-29 loss to Perkins County, the speedy Guerrero had a field day himself, rushing for 245 yards on 23 carries and electrifying TD runs of 62, 53 and 36 yards. The senior jitterbug also had non-scoring dashes of 10,15, and 18 yards and caught a pretty 43 yard pass, nearly weaving his way through the Perkins defense for another score. Kaden Guerrero is just a kick to watch with his quick, unpredictable moves and flashy football speed.

*Trev Luben - Wahoo - 5-10, 170 pound junior exploded for 197 yards on 19 carries and 3 touchdowns in the Warriors 54-19 win over Nebraska City. Luben, who had no carries in game one versus Wayne, also caught a 20 yard scoring pass from Wahoo quarterback Thomas Waido in the win.

*Mikey Vasquez - Omaha South - 5-7, 215 pound bulldozer blasted through the Omaha Bryan defense for 231 yards on 28 carries and a touchdown in the Packers 42-28 win. The hard running junior has 314 yards and a 7 YPC average after two games for 1-1 Omaha South.

*Robby Mayberry - Oakland-Craig - 155 pound senior had a coming out party in Oakland-Craig’s 38-20 win over Hartington Cedar Catholic. Mayberry carried the mail 28 times for 219 yards and 3 touchdowns, caught a pair of passes for 40 yards, made a couple of tackles on defense, and pirated an HCC pass. Robby displayed some pretty serious wheels on an impressive 62 yard scoring jaunt around the short (right) side of the field.

Joe Anderson’s Oakland-Craig Knights are currently 2-0 and rated #4 in a crowded, loaded Class C-2 field. Mayberry and his teammates face yet another stiff test Friday when they travel to 10th ranked Ponca.

When you think your football playing son is being hammered, consider what Tanner Whetham endured a year ago as a sophomore out in Morrill. And you have to pull for Morrill Lions, who haven’t had a winning season since 2005 (7-1). The Lions started playing 8-Man football in 2011 and have gone 11-47 since. Yes, you have to hope Morrill can fashion a winning season soon, they just deserve it.

*Koby Dillon - Palmyra - 5-8, 140 pound QB, who has rewritten the passing yardage record books at Palmyra, did everything he could possibly do in a 60-28 loss to Exeter-Milligan/Friend. Sounds strange, but hold on.

Dillon, who uncorks his throws with literally no body motion, completed 22 of 35 passes for 301 yards and a pair of touchdowns in the lopsided loss. Koby also had a 6 yard rushing score for the Panthers. His favorite target in the game was Andrew Waltke, who gathered in 13 Koby Dillon aerials for 213 yards and a 54 yard TD catch.

Honestly, Dillon’s throwing arm looks like a gigantic wrist rocket when he lets it fly. If he would put any full body/step-up follow through into his passes, the dude could fling the football 60 yards in the air. But, it looks like Koby is doing just fine the way he’s tossing it now, so what do I know?

Up next is Part 3 of Friday Night Lights football Heroes.