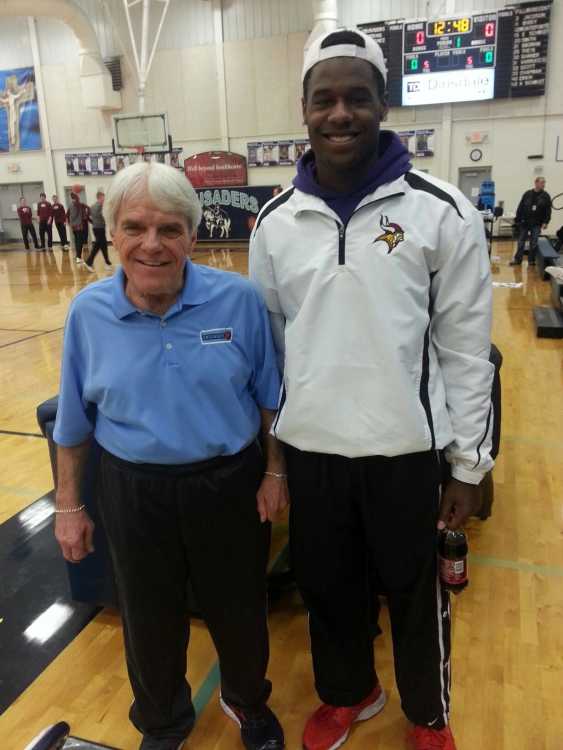 Big Trenton Harbur will make his 11-Man football debut for Gothenburg this season. Harbur, a 1000 yard rusher, previously played both 6-Man and 8-Man football for Stapleton. *(photo by Bobby Mills)

Some of these guys were already solid contributors for their respective teams in 2017, but may have been overshadowed by All-State calibur players who are now graduated. This is an interesting list of young men, some of whom already have a long list of statistics and others who will be household names by the end of this season because of their long list of 2018 statistics.

Islanders have had at least one exceptional, All-State type linebacker every single season during the Jeff Tomlin era, and Sam Sims would be that man in 2018. Second leading tackler to All-State Kohlten Keezor a year ago with 77 tackles, Sims is a dynamo whose engine never, ever stops.

Sam Sims packed a mean wallop on every tackle last year and the dude brought down some pretty heavy duty company the likes of Omaha North’s Zaner Gray and Kearney high QB Kanon Koster with killer force. Sims has a keen sense of where the ball is located on offense at all times, and gets to the man carrying that ball in a rush.

Last year Sam Sims made 18 solo stops and posted 59 assists. I can see those solo crushes going up this year, but the Islander defense operates like a group of sharks going after fresh bait, thus all the assists. That’s the way it works with Jeff Tomlin. Even Kohlten Keezor’s 107 tackles had 75 assists in the mix…….I really, really like it.

If you enjoy good, hard-nosed defensive football, get out to see Grand Island this Fall and keep your focus on #7 for a handful of plays. You’ll catch my drift about Mr. Sims.

On thing is certain. Ashton Hausmann is fast, really fast. He won the Class B 200 meter dash and grabbed a 4th place in the hundred as a sophomore last May at the State Track Meet. Hausmann can cover a 100 meters in :10.6 seconds (Conference track meet) and the 200 in :22.3. What does this mean on the football field? Maybe very little if the old saying “great track sprinters often times hate contact on the gridiron” holds true.

So let me clear that one up. This does not apply to Ashton Hausman. Tough kid!

Last year Ashton started both ways for Coach Jim Jacobson at Norris. Hausmann was a blocking fullback for two-time 1000 yard rusher/All-State back, Austin Schultz. On defense he was an outstanding strong safety, making 41 tackles in only 5 games before suffering a broken ankle that ended Ashton’s season.

This young man works all year round on his football skills and gets his chance to shine in 2018 as the Norris Titan featured back. Hausmann weighs 195 pounds, so there’s some real solid bulk to go with his incredible speed. He loves to hit, so there could be a chance that Coach Jacobson will move Hausmann from the defensive backfield to a linebacker position.

Norris has strong junior class, and a pretty good O-Line, so Husmann could enjoy a breakout season this Fall. I predict big things for Ashton Hausmann because he has raw talent, more importantly, works extremely hard even in the off-season. The kid just loves the game of football.

The All-State Wide Receiver from Class C-2 State Champion Yutan will make his presence known immediately in Class A. The kid is a player, period. Caught 48 passes in 2017, good for 891 yards (18.6 ypc) and 11 touchdowns. In the defensive backfield, Perchal was a first rate cover man and a pure headhunter against the run. The sophomore made 48 tackles and of those, 40 were solo stops. Forty. Throw in 3 INTs and fumble recovery and you have a nice defensive player for just a sophomore.

Chase Perchal has a unique way of just guiding the ball into his hands as a pass receiver. This youngster has the best concentration of anyone I saw last season when it comes to following the ball after it leaves his quarterback’s hand. Just exceptional concentration and the ability to get open going on simultaneously. Far advanced for his age.

Perchal is also a savage blocker downfield when he isn’t targeted as a receiver. On more than one occasion, I saw the guy knock a defender off his feet and continue on, before laying another player out without leaving his feet.

The vicious blocking also leads to his desire to make solo tackles on defense. 84 career tackles in 2 years and 68 were solos? Good lord. The kid just loves to hit and I can tell you, the dude makes sure their face gets acquainted with the turf on many of those tackles.

Chase Perchal will be a classic example of a player making the adjustment from lower class 11-Man football to big boy Class A ball. Not saying it won’t take some adjusting to the much higher degree of speed and strength, but the former Yutan Chieftain will make the switch and just may start both ways for Andy Means at Millard South when the season gets underway for the Patriots Thursday, August 24th vs. Gretna.

One of the standout players on that fabulous 2016 Millard South Under Armour 8th grade football team. Luellen has a good chance at getting some considerable playing time early in the season backing up two-time 1000 yard rusher, Zander Gray.

Head Coach Larry Martin doesn’t want to burn out Gray early, a questionable move by some coaches, but Martin is a genius at this strategy and has the backups to plug in that can do the job. His philosophy is making sure his starters are rested come playoff time, especially if they are nursing injuries. Enter one LaVaughn Luellen.

Yes, Martin does have returning junior RBs Aveon Barnes and Treon Fair-Good Jones, both possessing huge upsides, but I predict Luellen will still get some quality playing time early in the season…...maybe all year long.

This youngster is strong as an ox, already benching 290 and able squat 405 pounds. In two games last season (Bellevue East and Omaha Central), Luellen had 5 carries, 99 yards rushing and two touchdowns, including a sparkling 61 yard scoring run against Bell. East where he was untouched and pulling away the final 20 yards.

You’ll be hearing about young Mr. Luellen, also a super sharp student in the classroom.

It took just one week of playing football for a Nebraska high school for me to start keeping tabs on Sterling Wright. The speedy Wright transferred from Scott City, Kansas after his freshman year and immediately made an impact for Shelton.

The young Bulldogs went only 2-6 last year, but I witnessed flashes of high hopes when I saw them play in Week two a year ago. There is good news and a bit of concerning news for Shelton when discussing the upcoming season. The good news; The Bulldogs return 5 offensive starters and 6 on defense for their 8-Man football program; The concerning news would be that the Bulldogs make the jump from Class D-2 to Class D-1.

That’s can be big jump in 8-Man football because many D-1 eight man football programs have more players, deeper rosters. But…..Shelton does have Sterling Wright.

Young Wright is a special player. The kid is a virtuoso at making quick, on the spot cuts, can change directions in a flash and sheds tacklers like water falling off a duck’s back. If you put this kid behind an offensive line like BDS or Falls City Sacred Heart, he’s over 2,000 yards rushing. I know, “if its and buts were like candy and nuts, it would be Christmas everyday.”.......and I realize the lad still plays for Shelton...and that’s where he wants to be.

Last season, Sterling rushed for 975 yards and 12 TDs, whileracking up 1,363 yards of total offense. Wright made 47 tackles on defense, intercepted 3 passes (One Pick 6) and returned three kickoffs for touchdowns, two against a good Giltner squad.

Sterling Wright is one of the best 8-Man backs you haven’t heard of...yet. Dude runs an :11.2 hundred meters and has a vertical of 34 and half inches. He does have a brother by the way, senior Remington Wright (ah yes….the flying Wright Brothers Show), who is an 11 flat hundred man.

Keep a watchful eye on Sterling Wright in 2018, although the Bulldogs may still be a year away from a great season.

I’ve been following this kid since is freshman year at Stapleton/McPherson County playing 8-Man football. Trenton Harbur was a big dude then, but had little help from a team that had dwindled in numbers. Let me tell you how tough things were for Harbur and his teammates back in 2015.

In 8 games, the Broncos were outscored 535 to 171. They lost their opener to Anselmo-Merna 86-6, and that sourful trend continued to the bitter end. Despite the pounding, a freshman Trenton Harbur ran for 749 yards, scored 9 touchdowns and made 71 tackles on defense.

Last season, McPherson County decided to make a go of it by themselves and play 6-Man football. That left Stapleton out in the middle of the ocean without an oar. Not enough kids to field a team, too late to co-op with another school and way too late for any player to transfer. So that left one of the fastest, most powerful small town running backs in the state without a varsity team for 2017.

Stapleton did play a 6-Man Junior Varsity schedule in 2017, although Trenton Harbur’s stats did not count officially. Basically, it kept Harbur playing football, albeit watered down.

I found out Trenton Harbur had transferred to Gothenburg when I was announcing a basketball game at GICC earlier this year. Big dude comes off the bench playing JV Basketball and darn near gave me heart failure.

Fast forward to the present day and you have one of the most matured looking high school physical specimens, ready to strap on the pads to play 11-Man football for the first time in his life.

Take a look at the photo of Trenton Harbur and yours truly above. The guy looks like a college dude, doesn’t he? Good looking kid, strong, :10.9 hundred meter speed and all the upside on earth……..but has never played a down of 11-Man football.

How much better story can this be? To be brutally honest, I got down on my knees and prayed this young man would bet a chance to play 11-Man football for a larger school. I thought maybe North Platte, since Stapleton is just 29 miles due north, but Trenton told me an aunt or some relative lived in Gothenburg and that’s why he ended up there. Not sure about that info, but the bottom line is Harbur is now a Gothenburg Swede.

I predict immediate success for this young man in Gothenburg. One huge, determining factor for Trenton’s success will be his physical condition as we begin football practice. The dude literally had a year off, but was much bigger and stronger than everyone else, so he could easily have dogged it through 2017. Dunno.

Here is my final take on Trenton Harbur. Loved the kid after meeting him. The Swedes are coming off a 7-3 record with 7 starters returning on both sides of the ball and one of the craftiest, most knowledgeable prep football coaches in the state in Craig Haake. Coach Haake knows how to utilize his talent, so Harbur is in the best hands possible.

The Trenton Harbur/Gothenburg/11-Man football story that I cannot wait to see unfold……...Stay tuned.