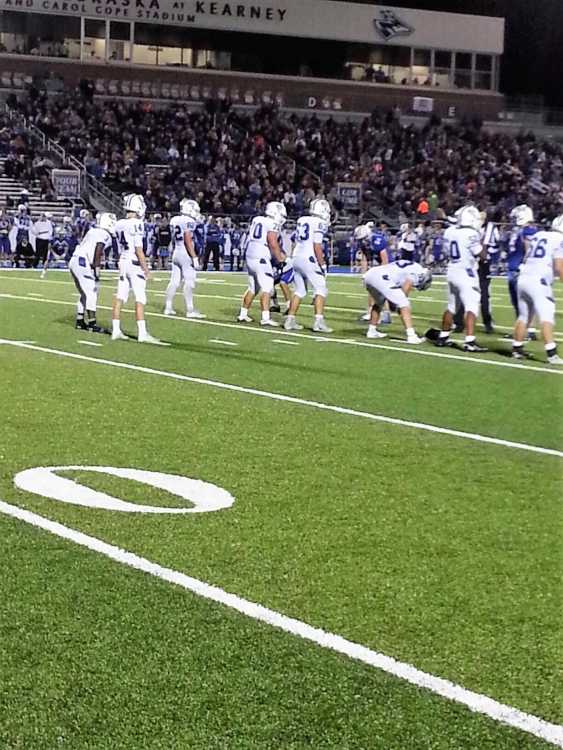 High time we gave some props to the men in the offensive trenches. You know, those guys that make the Dylan Kautz, Jeyvon Ducker, James Burks, Luke Sims types look good.

The shame of the deal is, that these dudes that do all the work and seldom grace the headlines unless they play defense. Not here.

I gathered a few of the big boys for you today, and there will be more to come in the future. And always remember the “Lineman’s Creed”.

Saw Ryan play in Kearney twice last season and witnessed a player with a highly intelligent approach to the game. Sure, every offensive lineman wants to get a pancake every play, but Bena knows that kind of thing just can’t happen. He just plays with such great savvy, knowing even a screen-type block can be enough to spring a Creighton Prep back like Luke Sims.

On several occasions, I saw the Junior Jay All-Nebraska selection pull, take care of a defender on the way around the corner without leaving his feet, then continue downfield looking for someone else to block.

I recall a particular play in one of those Kearney games last year when Prep had the ball on the Kearney side hash. Bena was leading a sweep, caught his defender backpedaling, then continued driving the dude out of bounds into the Bearcat sidelines. Takes a bit of courage to pull that one off in enemy trenches.

Honestly, Ryan Bena was the first offensive lineman that should have come to anyone’s mind that published a Super-State football team last year. Absolute no brainer because the man is that good.

And, Ryan represents Creighton Prep very well when he converses with people like myself. Terrific spokesman in my opinion, which is par for the course for Prep.

This is one huge human being that can impersonate a road grader to a tee. Seriously, Mehki Butler was one of the most dominating O-Lineman in the state a year ago despite missing considerable playing time due to injuries. He did recover well for the playoffs and was a force in the Vikings drive to their 3rd Class A title in the last five years.

In all honesty, I’m not certain Butler even had enough time to completely learn Omaha North’s offensive blocking schemes because of those regular season injuries. But in spite of that, the young man was still dominate, party because of his size, but also due to his quick footwork and very intelligent use of his long arms. The kid opened up some sweet gaps for Milton Sargbah and Zander Gray, and was just learning. Frightening.

Omaha North’s opponents will shudder to hear this, but I think Butler will make great strides in 2018 and become a very sought after offensive lineman in the Division One ranks.

Sales was a 2nd Team All-Metro pick in 2017 and will make even greater strides between his junior and senior seasons. He has a low center of gravity and his blocking style reminds me of the same techniques used by Grand Island’s 1978 Class A championship offensive lineman.

They were an undersized group that relied on technique rather than brute strength. They had to employ that style because those old Kenny Fisher teams shoved the ball right down your throat with a devastating ground game that targeted running right up the gut. Dylan Sales would have been a perfect fit that year, and you may recall the Islanders smothered Creighton Prep 31-7 on that frigid evening back in ‘78.

Dylan Sales is kid that can excel on pulling plays, and pass protect situations as well. I love the fact that if he pulls and can’t find a man to block right away, he continues down field to seek another defender to take out of the play. And, his vision is keen enough to spot a defender pursuing horizontally as well.

One thing to remember about any of these premier lineman. You find me a team that had a running back who posted numbers like Omaha Burke’s James Burks (1,981 yards) and I’ll show at least two O-lineman that created some gaping holes.

Dylan Sales was one of those guys.

Maybe 20 pounds lighter than his teammate Ethan Piper, but Joe Teten’s quick burst off the ball and superior strength make up for that difference. Teten has text book blocking technique and knows how to put his defender on the ground if he so chooses.

I love the fire Joe Teten plays with from the opening kick-off till the final gun sounds. He also may have the best hands below Class A and doesn’t have to be sneaky about it. Teten honestly uses his arms and hands as well as his wheels.

This will sound funny, but big Noah Stafursky ran a little under the radar a year ago and went unnoticed by some folks. Simple explanation for that. Most of the focus was on Husker recruit Masry Mapieu. But, seriously…..how can you miss a 6-4, 310 human being?

This young man improved as the year progressed in 2017. Although I missed my first State Football Championships ever at Memorial Stadium, I watched this guy play a marvelous game (maybe his best all year), as York defeated Omaha Skutt in living color on NET.

This fall, Noah will take center stage as the featured offensive line guy and Garrett Snodgrass is going to love it. Stafursky is an outstanding pass blocker for one thing and the fact he runs a 5.5 forty doesn’t hurt matters either. The kid uses his big hands to win most of his battles in that department and does the same when he operates from his nose guard position on defense.

Noah Stafursky is one reason York will be favored to defend their Class B title in the upcoming 2018 football season.

Big Rex! And just a Junior. A starter since his freshman season for Cedar, Becker keeps getting better and dominating more each season. He has a sleek, streamlined build and a quick burst off the ball.

This kid has ben a dominator since his freshman season for this Class C-2 Cedar Catholic squad. Becker had to set some kind of record last year when he had over 20 pancake blocks against Crofton. He had to have had more pancakes in 2017 than Village Inn serves in one day.

Once again, the Trojans just happen to have a phenomenal running back by the name of Jacob Keiser. The outstanding Keiser gained over 1,500 yards a year ago, and guess who his classmate happens to be? Sometimes those openings just seem to expand when your sophomore buddy Rex Becker is up there creating those massive gaps.

Might be interesting this Fall because Norfolk Catholic has dropped to Class C-2. Could we see a possible dream matchup between Norfolk Catholic lineman Ethan Piper, Joe Teten and HCC’s Rex Becker? I’d pay to see that baby!

And need I mention that Rex Becker is an outstanding defensive player as well?

Anybody outstate familiar with this guy? If not, better get interested right now if you like dominating lineman. Kellogg was just getting the hang of it as a 277 pound sophomore, but still created numerous openings for 1,200 yard rusher, Jerome Barnes last season.

Barnes has since graduated, but Mr. Kellogg will be back for two more seasons for the Monarchs and will make good use of that hulking 6-6 frame. And you know, three hundred five pounds doesn’t make a 6-6 guy look all that heavy, so Kellogg looks streamlined and certainly plays like it.

The youngster had a terrific game in a 59-41 loss to Lincoln Pius early last season, and I wonder if that didn’t boost Preston’s confidence a bunch. There’s no low center of gravity when you’re 6-6, so Kellogg forces defenders to crouch a bit, then simply bends their bodies over, then crushes ‘em into a heap.

As is the case with taller players like Preston Kellogg, their long armed reach is a real weapon. If you are an offensive lineman, you also just have to dig in and hand fight without holding…..or getting caught holding would be a better term. And Preston Kellogg does that well for a sophomore.

Yes, there were times Kellogg could have been more aggressive a year ago, but much of that will change this season and really develop his senior year if things continue in the same direction.

Keep your eye on Papio’s big number 75 in 2018. There are big things in the future for this kid.