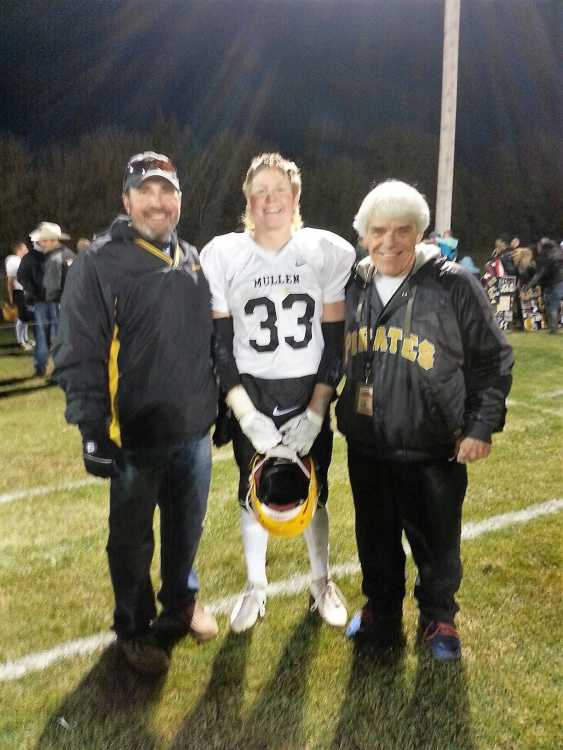 Mullen's Wade Edis (left) and Lane Edis (#33)are apparently the only Father/Son duo in Nebraska prep football to each rush for over 2,000 yards in a single season.

Today we feature a foursome of athletes that are about a versatile and diversified as they come on a football field. An All-State dream backfield could be formed with these gentlemen and contain any combination of interchangeable parts.

Both Miko Maessner of Kearney and Garrett Snodgrass of York can and have played the quarterback position. Mullen’s Lane Edis is a terrific RB and Omaha Westside’s multi-talented Jaden Kohls could gain a thousand yards as a runner or log a 1000 yards catching the ball as a receiver.

No doubt that Snodgrass could play fullback, running back, tight end or wide receiver on offense. Edis could catch passes out of the backfield for sure, and Maessner could and can play anywhere, as can Jaden Kohls.

As far as versatility and remarkable talent, it doesn’t get much better than these guys.

Not going pull any punches here, this young man is right at the top of my list as far as overall talent potential on the gridiron is concerned, and he has just scratched the surface. I’m not a recruiter, but if I were employed by the University of Nebraska, I would ramp up my interest in Miko Maessner.

If he chooses not to commit early, by the time Mr. Maessner’s high school career is nearing completion, he will have more than just a just a few Division One offers and will go wherever he pleases. There’s that much potential here.

Last season, opponents held their breath every time Maessner touched the ball, and it seemed like all of his yards came in huge chunks. The fleet-footed sophomore was not even a full time starter for part o the entire season a year ago and still managed to piled up 1,046 yards and 10 TDs, averaging nearly 10 yards a pop.

Miko also caught 9 passes in 2017. Six of those receptions went for touchdowns. He threw one pass last season….it was a completed for a critical touchdown in the semifinal win over Creighton Prep. Maessner also returned a fumble for a score against Norfolk and recorded 15 tackles on defense in limited situations. Three of those tackles went for losses, two of which were QB sacks.

In the Class A final against Omaha North, Maessner scored a TD on a rush and while playing defense, came all the way across the field, covering what seemed a hundred yards, to run down Milton Sargbah, preventing a touchdown.

Miko Maessner as it all. The talented Kearney athlete has run a :10.8 hundred, a 21.7 two hundred and popped a sizzling 400 leg on their 1,600 meter relay. On the gridiron, all the tools are there; extremely quick first step out of the backfield, terrific vision, very patient reading his blocks and the ability to turn on the jets in a heartbeat.

Maessner can plant and cut if he must, but normally just reads his blocks and glides…..like smoke through a keyhole. He sheds tacklers, and gets yards after contact.

Obviously a very dangerous receiver, he can also throw the football with his accurate arm and is just, plain and simply put, a high IQ football player who makes good decisions…….and doesn’t fumble.

The early portion of Kearney’s season will be a strong test for Miko Maessner considering all the talent the ‘Cats graduated a year ago, but that is the exact time future stars like this young man shine the brightest.

In just two seasons at Omaha Westside, the multi-talented Jaden Kohls has amassed 1,511 yards rushing, 1,239 receiving yards and 36 total touchdowns. I watched this kid against Kearney in the Class A quarterfinals and he is a dazzler for sure. A player the defense must keep track of every single play of the game.

Kohls broke Westside’s single touchdown record a year ago in a 48-17 win over Millard South. He exploded for 6 touchdowns, all coming in the half. Check out his statline for that night…..185 yards on 19 carries with 4 TDs, five pass receptions for 144 yards and two more TDs.

Jaden Kohls was primarily a slot back his sophomore season, but moved to the featured running back position last year and absolutely tore things up.

There isn’t much #13 cannot do offensively for the Warriors. As a pass receiver, I can’t think of a worse bad dream matchup for any defender than Jaden Kohls. The kid has a knack for getting open on his crisp pass routes, is very sure handed, and makes defenders miss after catching the football.

Kohls also reads his blocks well and has that sought-after, long-legged 400 meter stride. Jared is a weave and glide runner with tremendous open field speed that has the ability to break a long one every time he touches the ball.

As a RB, Jaden gets to the outside quickly, but can also run with the best of them, getting those tough, punishing up-the-gut yards.

Kohls will certainly rival Maessner for an all-around offensive weapon. The Warriors have to be tickled pink to have this guy back for another season.

Should mention that Kohls uncle is Micah Kohls of Aurora who won the Gatorade Player-of-the-Year award in Nebraska some years back. (2000?)

Probably wouldn’t be too much of a stretch to say that Garrett Snodgrass is a man among boys in terms of football strength, intelligence, speed, and the will to get from point A to point B in any situation. He is always clutch and is a big time player in big time situations. If Miko Maessner and Jaden Kohls are right at the top of the list for best all-around football player in Nebraska, Garrett Snodgrass is probably at the top of that august company.

Garrett Snodgrass is a chip off the old block. I saw his Dad (Glenn/York Head FB Coach) play football and basketball at North Loup-Scotia back in the day, and could have seen this coming. Right now, Glenn Snodgrass is the finest football coach the state and it should thrill him to death that Garrett has another varsity season left for York and a Nebraska football offer to boot.

On defense, the 220 pound hulk made 126 tackles that all hurt and picked off a McCook pass with an incredible leap a few yards past the line of scrimmage.

Most of Nebraska and the nation for that matter, has seen Garrett’s film clip against Elkhorn South during crunch time. He broke what, 7,8 or 9 tackles along the way for a long TD gallop. Sensational highlight reel run at any level of football. Just stunning.

Nobody would be considered crazy of they said that Snodgrass could play any position on the football field. Yours truly, for one, would hop on that bandwagon.

Garrett’s bench press is listed at 245. Now I know Glenn doesn’t make things up, but his son plays more like a man that can bench around 320. Ask the defenders who have attempted to tackle him head on, or the ball carriers that have been drilled by Garrett.

York lost some great seniors from a year ago, but Garrett Snodgrass can lead this bunch to a second straight Class B title. He and his Father are that good.

Rest assured that Scott Frost and the Huskers are getting a blue chip player in Garrett Snodgrass.

Bloodlines here, friends. Lane and his Dad, Wade appear to be the first and only 2,000 yard rusher Father/Son duo in Nebraska prep football history. Wade, who looks like he could still play the game, still holds the single season rushing record at Mullen with 2,728 yards, coming back in 1990. Along with that record came a Class D-2 state title trophy.

I’ve seen both of these gentlemen play and their styles are not all that different. Wade may have owned a little more speed, but Lane can get the job done just fine, thank you.

I you have not seen Mullen play live, you are at a distinct disadvantage since they just joined HUDL late last November. Just no film out there. But seeing Lane Edis one time in Giltner during last year’s playoffs was enough for me.

Mullen is a football team that grinds out the ground game and have since the beginning of the Hall of Fame coach, Mike Brown’s time. Brownie (my Hero) believes in running the ball and always produced rough, tough linemen that blew open holes or a quick, powerful running back, and Lane Edis fits that mold to perfection.

Last season, Edis exploded for 2,325 yards and 45 rushing touchdowns for the 11-1 Broncos, who were derailed 42-30 in the Class D-2 semifinals by Blue Hill. The smooth-as-silk, gliding Mullen junior also made his pass receptions count…...big time.

Lane hauled in 7 passes in 2017, good for 172 yards. Five of those catches went for scores. He also returned two interceptions for touchdowns and returned a punt for score in a 92-25 win over Leyton.

One defense, Lane made 51 solo stops, 71 tackles in all, and was always the man who could prevent the long TD run. Edis also does the punting for Mullen and sports a 35 yard per boot average, very effective on an 80 yard, 8-Man football field.

Lane Edis is about as complete an all-around small town athlete as you will find in Nebraska. He was a starter and big contributor on Mullen’s state championship basketball team two years ago, runs an :11.3 hundred in track and is, of course, a heck of a football player.

As a RB, Lane is a very patient runner with very good vision, strong legs, and the ability to kick the jets in when he sees the path to the end zone. The kid also wastes no movement on his way to the goal line. He is a perfect Mike Brown “straight line” runner that can plow over defenders if needed with way better than average speed.

Now all Lane needs is that little something his Father earned back in 1990. A State Football Championship Trophy. Stay tuned.