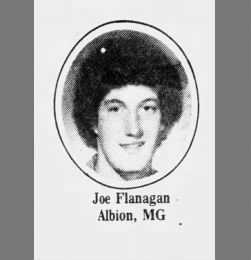 Albion star Joe Flanagan, pound for pound, one of the toughest in 1975.

It is time to premier a new series saluting previous All-State football teams here in Nebraska. We will begin by doing a “modern day” series covering the years spanning 1975 to the present day.

When that project is completed, we will then turn back the clock to feature a “retro series spanning the years from 1940 to 1974.

This officially places me in that “retro series” since I graduated in 1967. Well, alright then.

One of the reasons I chose 1975 is the NSAA football playoffs premiered that year. It is also the year I released my first Bobby Mills 1000 Yard Club list.

1975 also marked the second year that defensive teams were added to All-State selections, albeit only for Super-State, Class A and Class B in the Journal-Star.

The very next year, all classes featured Offensive and Defensive All-State squads.

Class B: Next 64 largest schools

***Sam Yowell’s 26 yard TD scamper in the middle of the 3rd quarter proved to be pivotal for Coach Lee Zentic’s Lincoln East team. The score put the Spartans up 18-7. Zentic earned career win number 100, as Yowell ran for 89 yards on 17 carries. Rugged Scott Guyer made 11 tackles to lead the staunch Lincoln East defense.

***The legendary Vince Aldrich and his Thunderbolts completed an unbeaten season as Tom Doggett ran for 100 yards and a score. TE Ron Coniglio caught 3 passes for 89 yards, two going for TDs. Pius had been named Class B ratings champions the previous two years.

***Plainview coach Warren Washburn elected to gamble on defense by stacking 9 men on the line of scrimmage in an effort stop #1 Neumann’s powerful wishbone offense. The gamble paid off as Plainview held the Cavaliers powerful Wishbone to only 144 rushing yards for the day. The Pirates, who forced 4 Neumann fumbles, were led by Tim McCrady’s 22 tackles (12 unassisted) on defense.

***Grant reversed last year’s (1974) final ratings with the 30-7 in over Scribner. The Plainsmen, who finished 2nd to Scribner in those 1974 C-2 ratings, were led by Kevin Poppe’s three touchdown runs (59, 5,13 yards). Grant overcame a 7-6 halftime deficit by making some defensive adjustments, thanks to Defensive Coach Tom Lawson.

***Multiple Hall of Fame Coach Gary Deboer’s Nelson Tigers were too much for their future co-op partners in the Class D 11-Man title match. Dennis Holsteen led Nelson with 124 yards rushing and a 15 yard scoring dash. The real star for Nelson was LB Rick Mazour, who was a one man wrecking crew on defense with 22 tackles.

***Legendary Adams coach Ken Cook probably wondered what heck he did to make the NSAA mad. After an 800 mile round trip to Sidney, Cookie’s Hornets faced a 350 mile round trip jaunt to Elgin. All was good in the end as twin 1000 yard rushers Steve Buss and Tony Boeve eventually wore down No. 1 Elgin. Boeve carried the ball 41 times for 167 yards and two TDs (11, 2 runs), while Buss added 104 yards on 30 totes and two more scores (9, 2 yards). True to the 8-Man game, the two teams combined for 44 second quarter points.

The Adams defense held state rushing champion Kent Beckman to 78 yards on 21 carries, while the Tiger offense was controlling the ball to the tune of 40 more plays (on offense) than Elgin.

**(it is apparent some players were placed at unfamiliar positions to assure they made the All-State team. I will indicate when this is the case)