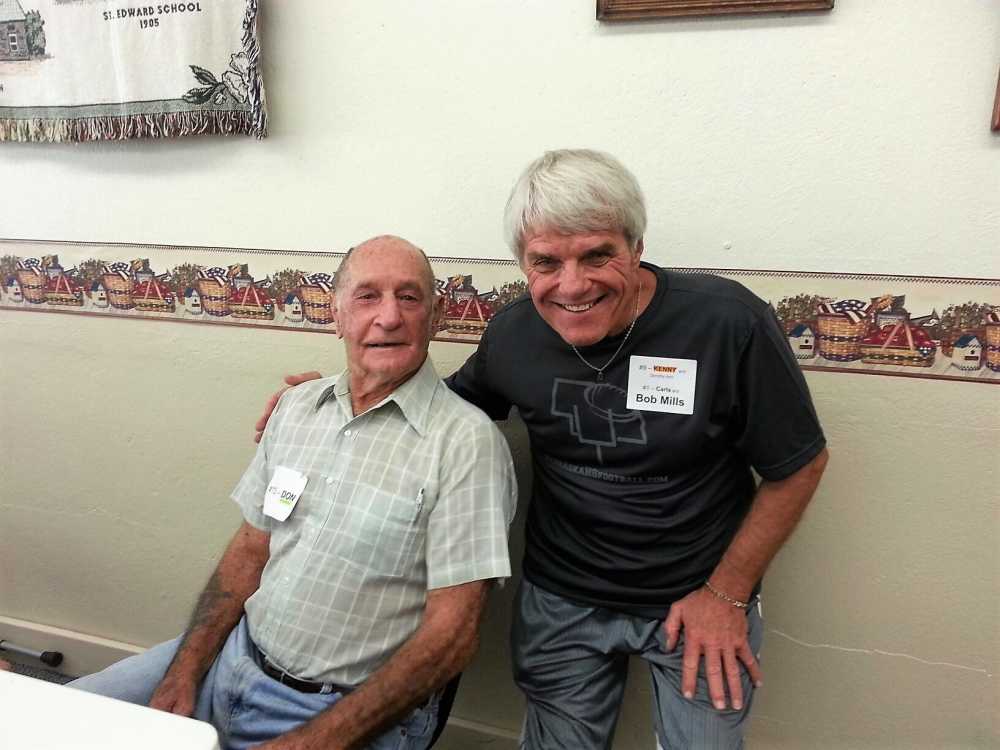 The last of the Fabulous Baker Boys, Genoa high school sports legend Don Baker, turned in his uniform for the final time on Tuesday, March 28th in St. Edward, Nebraska. He was 92.

Don, along with his older brother Kenny, blazed a legendary prep sports trail for the Genoa Orioles right smack dab in the middle of World War II, an early 1940’s era when everything took a back seat to the dark days of wartime.

The shifty, speedy Baker reaped All-State honors as a Quarterback for Genoa in 1943, two years after older brother Kenny landed that very same honor. Back in that day, there was only one overall All-State football team for 11-Man football.

It took a special athlete, one with almost natural God-given talents, to be named to those World-Herald or Lincoln Star All-State teams, especially if you competed below the Class A level. Don Baker was one of those elite athletes and whole lot more.

During his senior year in high school, Don led the entire state of Nebraska with 21 touchdowns and 132 points, that coming during an abbreviated seven game Genoa football schedule.

Baker was also a basketball and track standout during the high school sports seasons in Genoa, and a renaissance man on the baseball diamonds during the dog days of summer.

But I have a gut feeling that Mr. Baker, who spent nearly his entire adult life in St. Edward, never reached the peak of his athletic superiority until his late 30’s, maybe even early 40’s.

The legendary Don Baker continued to haunt opponents on the hardwoods and baseball diamonds long after graduating from high school. Matter of fact, Don was able to finish his senior year at Genoa high school, being drafted into military duty and entering the US Navy on December 6th of 1943.

The very next year, Don Baker received his high school diploma on a Naval Warship. His playing days could have ended after fighting for his country during World War II, but they were far from over when he returned to Nebraska, which was bad news for future gameday opponents.

The 5-11 Baker, who tipped the scales at only 13 pounds heavier than his high school playing days, apparently went head to head on the basketball courts with a few hoops legends like former Nebraska University basketball wizard Al Maxey (1959/1960), who later played with the famous Behlens All-Stars out of Columbus. Don was probably in his mid to late 30’s by then.

How good were those Behlens boys? They were the undisputed kings of the Nebraska AAU basketball circuit back in that organization’s heyday.

Another amazing fact is that Don Baker may have faced the 6-5 Al Maxey and Behlens teammate Grant Simmons when Simmons was still ranked #3 in career scoring for Nebraska Cornhusker basketball. Pretty stiff competition for man Don’s age, but he never flinched.

So how good was this Al Maxey? In a December 10, 1963 matchup with the Husker Frosh, Maxey nearly matched Omaha Tech and Husker sensation Fred Hare for points (26-20). And the man hung out with some rather familiar names throughout his life. His high school basketball teammate and best man at his wedding was one Oscar Robertson.

At one time during that same stretch, Don Baker and the St. Edward town basketball team boasted a such lengthy winning streak that it took the Creighton University reserve basketball team to end it. (Back in the 60’s, colleges and universities in Nebraska permitted their reserve and freshman basketball teams to play AAU and town teams from around the state.)

And by the time Don Baker reached the age of 40, the incredible physical specimen was playing with sons of his former teammates, still leading the way and schooling a group of athletes a generation younger than himself.

Don had three daughters (Sheri, Connie and Janell) and only one son. I’m not certain if any of the girls played high school sports, but I do know that his only son, David (Woody) Baker, was an All-State football player and 1000 yard rusher for St. Edward in 1979.

The lad was good, and Woody was molded in that Baker toughness. Still is, matter of fact. And Don’s grandson Donny Baker, became a third generation All-State Baker football player when he was honored as an End/Linebacker for the Beavers in 2006, following in the footsteps of Woody and Don. Donny’s basketball team also won a Class D-2 State Championship that very next spring.

The Baker legacy lives on, but an era has ended with the passing of the great Don Baker, the Legend, and last of the Fabulous Baker Boys.

They don’t make them like Don or Kenny Baker anymore. They grew up in the Dirty 30’s, the Great Depression days, as did the legendary Fisher boys from St. Edward. They were born tough in an era when there was no welfare, no food stamps, no safety-net, no credit cards, and often times no place to turn. Even the banks were broke and only the strong survived.

In fact, Don’s family was so poor they couldn’t afford to put milk on their Corn Flakes. Just water. But there was silver lining in all the despair. Men like Donald Elvin Baker lived through the Dust Bowl, made the best of it and forged through those times without negative thoughts and learned from it.

Don Baker was a strong and competitive man till the end, passing that passion, grit and leadership on to everyone he touched. But I will also remember him as a gentle family man who was proud of his St. Edward community, always working to make it a better place.

And you know something else? A pretend journalist like myself could have never have written words like these had it not have been for sports Legends like Don and Kenny Baker, Larry Vlasin, Kenny Fisher, Bill Holliday, Hoppy McCue and so many others. Their tales of what is was like back then were worth far more than any written accounts.

And it’s a eerie thing about speaking with these Legends. Even though their minds might not have been in step with what happened today, yesterday, or a week ago, the accounts of their magical past were always remembered with precision accuracy right down to letter.

I also believed every word these men spoke for the simple reason they never had a reason to spin yarn or tell tall tales. They never had to stretch that 30 yard touchdown run into a 60, 70 or 80 yard, tackle shedding classic as the years went by. They didn’t have to lie. They were one of a kind. That’s why they are known as Legends, yet none of them would ever claim that status.

And speaking of written accounts, Don Baker did it the hard way. During wartime, most of the papers were filled from beginning to end with war stories, and rightly so. The high school sports stories were few in number, so Uncle Don never had the luxury of headlines like his brother Kenny or some of the others enjoyed. His deeds were simply remembered by the very people he competed against. So fitting.

You were good, Don Baker, really good. If I’m lucky, our paths may just cross someday on the other side. And if I may so bold, I have just one request, Sir.

Save me a place on the sidelines or courtside up there, will you? I’d love to see you play.