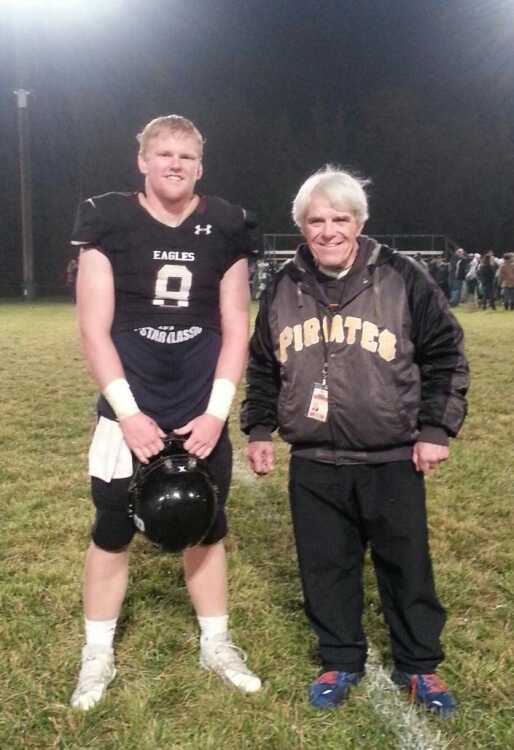 SHICKLEY - If you think most high school football coaches forget about a season ending loss and just move forward to the next year, boy do you have a rude awakening coming your way.

Not only did BDS co-coaches Mark Rotter and Chris Ardissono not forget last year’s last second 16-12 semifinal loss to Falls City Sacred Heart, they started planning how to reverse the heartbreak when the snow was flying way back in February of this year.

In fact, in an post game interview with Lincoln Journal-Star’s excellent prep sports editor, Ron Powell, I overheard Coach Rotter say they saved certain plays they had drawn up back in February, until his very night.

And the result? A resounding 50-16 “right-the ship” crushing win over Falls City Sacred Heart that was so resounding, the running clock was set in motion after the Storm scored with 3:08 left in the 3rd quarter, leading 44-8.

This may be one of the most physical BDS football teams I have witnessed since 2010, but we’ll get to that one in a little bit. After all, every BDS team is extremely physical, some just more than others.

BDS took care of things in last year’s regular season meeting between the two schools, 36-14, but then came the bitter 16-12 semifinal loss to the Irish.

This fall when the schools met at Jug Brown Stadium in Falls City on the afternoon of October 6th, the Eagles won it 23-14 in a physical, defensive battle. Most of the estimated 1000 in attendance on this night may have expected another slobber-knocker, defensive struggle, but apparently Coaches Mark Rotter and Chris Ardissono knew otherwise.

On a balmy 45 degree night, with light fog and drizzle dancing in the Shickley air, the highly anticipated D-1 battle was only close at the 1:52 mark of the 1st quarter.

After punting on their initial possession of the game, BDS unveiled one of the “those” plays Rotter and Ardissono worked on last winter. It was unveiled on the very first play of the Eagles 2nd possession.

On the very next possession, Irish quarterback Drew Bippes, a solid All-State candidate, was crunched as he threw the ball. Thomas Mick picked off the throw, and returned it 43 yards to the Sacred Heart 12 yard line .

The Irish answered right back on the ensuing drive, taking it 65 yards in 12 plays, culminating it with a Drew Bippes to sophomore Jake Hoy, 8 yard touchdown pass. Bippes then ran it in for the two point conversion, and it was 14-8 BDS with 1:52 left in the first.

It was never close after that.

John Christensen, who is way faster than you think, ripped off a 33 yard scoring run on the next BDS possession, then added a 3 yard TD run to open the 2nd stanza.

The multi-talented junior then found Caden Norder for a 5 yard touchdown pass to hike the Eagles lead to 36-8 lead at the halftime break. Meanwhile, the vicious, hard-hitting Eagles defense was forcing Drew Bippes to loft 26 passes in the first half, completing only 9 of those for 54 yards.

As in every other game this season, BDS essentially shut down any ideas of a rushing game, although Christian Harring and Bippes had 40 and 54 ground yards respectively in the first half. And I’m thinking that probably was easily a team high for an opening half against that Eagles defense.

Falls City Sacred Heart came out firing aerials with even more frequency in the third quarter, going with a no-huddle offense. Drew Bippes connected on 6 of his first 8 passes for 49 yards, but no points.

BDS put the running clock in motion when John Christensen connected with Karson Dickson for an 11 yard scoring pass with 1:52 left in the 3rd. Dickson made a spectacular catch in the right corner of the end zone under good coverage by an Irish defender.

I understand that Schroeder toted the football on every BDS offensive play but one, during the second half of the Eagles 50-16 second round win over Fullerton.

Sacred Heart did add a score with 13.5 seconds left in the contest, when Jake Hoy moved to quarterback, then skirted off tackle for a 6 yard scoring run.

The resounding win over a storied Falls City Sacred Heart program, sends BDS to the Class D-1 championship game next Monday at Memorial Stadium in Lincoln. BDS will face a fine 12-0 Blue Hill team at 2:45 on that afternoon.

So, when is the last time a Falls City Sacred Heart football team had 50 points scored on them? You have to go back to 2010, when Pawnee City beat the Irish in the second round of the playoffs, 58-44.

And the last time a team beat the Irish by more than tonight’s 34 point margin of victory? That would be 2009, when Allen bested Doug Goltz’s forces, 46-8 in the opening round of the D-2 playoffs.

So, how good does this make the current BDS football team? I’ll go out on a limb and say, the best I’ve seen other than the 2015 State Champion team that featured the best trio of 8-Man linebackers I’ve witnessed in a decade or two.

I will say that this 2017 Eagles defense may have better pass coverage that the 2015 crew. We’ll let those two teams argue that point.

Christensen was deadly accurate with his passes, completing 9 of 11 for 132 yards and 3 touchdowns. He did suffer a couple of interceptions, but neither turned into Sacred Heart points.

Falls City Sacred Heart’s rushing game was paced by Drew Bippes and Christian Harring, who each ran for 71 yards on an identical 13 touches.

Bippes lofted a rare 40 passes, completing 16 for 102 yards and a touchdown with two picks.

You still have to be left wondering how powerful is a team that crushes a Falls City Sacred Heart team 50-16? Not very many do that to Doug Goltz, who is already a legendary coach who has carved his name in Nebraska prep football history.

And the thing about Coach Goltz’s football team tonight? They never quit. Christian Harring and Drew Bippes ran tough till the bitter end and tackled tough on defense as well. Regardless of the final score, this game featured two of Class D-2’s best football teams

Now it’s onward and upward for this BDS team. They meet a top notch Blue Hill team that bested Mullen, 42-30, with senior QB John Rouse exploding for 296 rushing yards. The Bobcats are also very physical, so we may be in for a whale of a Class D-1 title game next Monday.