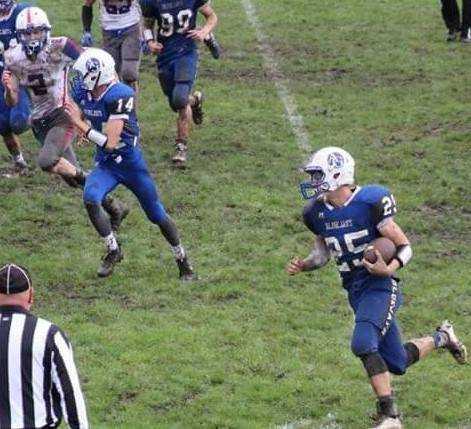 *Bryce Kitrell (RB) - Ashland-Greenwood - Yes, that Kitrell family. Bloodlines galore here, man. The 6-0, 175 pound sophomore took off like a 4th of July rocket with a 200 yard rushing game against Milford-Dorchester in game 5 earlier this fall, then was stuffed by Fairbury to the tune of minus 16 yards the very week. But the final three weeks of the season, the young Kitrell just exploded for the 3-6 Bluejays.

The rock solid, quick cutting Kitrell finished his sophomore season with rushing games of 183 yards vs Lincoln Christian, 167 yards against Southern and then a sparkling 196 yard effort in the season finale vs Raymond Central.

Bryce Kitrell actually played some defense last season as a freshman until breaking his collarbone. 2017 was a way different story. The shifty, hard hitting sophomore finished this season with 1,060 rushing yards and 11 TDs. He also had 196 receiving yards, 519 yards on kick returns and 144 more on punt returns.

Kitrell concluded his sophomore season with 1,919 All-Purpose yards for a 3-6 football team. On defense, Bryce made 41 tackles and recovered two fumbles for the Bluejays.

Keep a close watch on this third Kitrell brother. The kid has a build that would make a serious weight room senior jealous with envy. He has sharp, smart moves as a running back, ran a :23.1 hundred meter dash last season as a freshman, and qualified for the State Track Meet this past May with a Discus throw of 152 feet and change.

Terrific potential, but then again, he’s a Kitrell.

*Jared Minnick (RB/LB) - West Point Guardian Angels CC - The 185 pound junior slayed the Pender Pendragons with his punishing 339 yards on 40 carries and eight touchdowns. The Bluejays used all his scoring to turn back Pender 64-50 in last week’s regular season finale. Minnick also had 6 solo tackles and an interception in the game.

Minnick finished the regular season with 1,552 yards and 30 TDs, including 577 yards and 13 scores the past two games. In his 27 game career to date, Jared has accumulated 2,951 yards and 46 touchdowns. Add in 118 career tackles and you have an incredible football talent, but then again, that’s Guardian Angels CC football for you.

The Bluejays open the Class D-1 playoffs Thursday with a rematch against Pender. Don’t you just love those? Guardian Angels CC has been awarded the No 3 seed in that Class D-1 East bracket that includes #2 seed Howells-Dodge, and top seed Creighton.

Seward missed the playoffs this season, finishing 3-6, but Krause still had a standout season for the Bluejays.

The poised junior QB was accurate on 55% of his 242 passes for a whopping 2,206 yards, 20 TDs with 9 INTs. Joseph also started running the football a bunch more the last two games of the season, and produced games of 92 yards vs York and 152 yards on 27 carries in that Aurora loss. He finished the year with 393 ground yards and 5 TDs.

Thus far, in his three years as a starting QB for Seward, Joseph Krause thrown for 3,875 yards and 34 touchdowns. Not too shabby. I watched this young man play against Elkhorn South (no fun for him) and he looked very mobile and possessed a rifle arm with very decent accuracy.

*Thad Moldenhauer (B/DB) - Wilber-Clatonia - Freeman will have bad dreams about seeing this 5-8, 145 pound sophomore waiting to field a kickoff.

In Wilber-Clatonia’s 41-27 win over the Falcons, Moldenhauer not only brought a kick back 91 yards for a touchdown, but hit the replay button and brought another one back to the house from 97 yards away.

Incidentally, that is Thad Moldenhauer’s 3rd Kick return touchdown, to go along with his 3 punt return TDs in 2017. Think he might lead all of 11-Man football in that department this season?

Between rushing, receiving, kick and punt return yards, the sophomore has 1,065 All-Purpose Yards and 9 TDs this fall. Moldenhauer also has 27 tackles on defense.

The defending Class C-2 champion Wolverines open up their title defense on Friday when they host #9 Battle Creek at 6:00. Wilber-Clatonia, who concluded the regular season at 8-1, will be seeded #8 in the 16 team Class C-2 playoff field.

12th seeded Yutan, perhaps C-2’s most dangerous playoff team, opens the playoff season Friday with a sweet matchup at #5 seed Oakland-Craig. Anytime you have a defensive player like Colton Feist on your football team, they should be considered very dangerous.

In his 39 games at Yutan, the 225 pound Feist has 333 career tackles, 38 for losses and 17 of those for sacks. Throw in 12 defended passes, 2 recovered fumbles and 3 blocked punts and you have a man flirting with Division One college football status.

Reed does it all for the 6-1 Hawks. Trent not only has that 2,062 yards rushing, but leads the defense with 92 tackles. He also is an All-State caliber punter, sporting a 39.4 average per boot on 9 punts. Reed also has converted 17 of 23 PAT kicks, which are worth 2 points in 6-Man football.

Hay Springs will hit the road Friday to meet 7-1 Spalding Academy in what promises to be a top notch first round matchup.

Cassidy, the perfect Pius X mold footballer, also made 10 tackles (2 for losses) for the rock hard Bolts “D”. Pete Blumenstock, the undersized 6-0, 175 pound junior defensive end, made five tackles in the game and ended the contest with a rousing sack of North QB Houston Folgelstrom.

Anyone want to tell me a skilled 8-Man football player can’t play Class A football?

*Fullerton 32-28 Humphrey St. Francis - The Warriors shocked the unbeaten Flyers when Isaac Gleason sacked and stripped the ball from the St. Francis quarterback. Fullerton came up with the loose football and John Wetovick then scored the winning TD on a 5 yard run with 16 seconds left in the game.

Hunter Friend had two touchdowns for the 7-1 Warriors, who host Osceola (10th seed) at 7:00 in the opening round of the Class D-2 playoffs, which begin on Thursday.

Smith also added 7 stops on defense. He also returns both punts and kickoffs and does the punting for Meridian. For the season, Tybor Smith has an even-steven 1,300 rushing yards and 19 TDs.

#9 seed Meridian opens the Class D-2 playoffs with a road game to face #8 seed Randolph on Thursday. Game time up there is slated for 7:00 PM.

*Alex Schreiner (WR to RB) - Lincoln Christian - Pulled off the ultimate transformation from wide receiver to running back this season for the Crusaders.

After catching 51 passes for 956 yards last year and an additional 205 through the first four outings this season, the multi-skilled Schreiner made the switch to RB in game 5 vs Milford-Dorchester and has responded with a mind-boggling 773 yards since the move. That’s 154 yards a game, folks. Pretty good for a Newbee.

Pleasanton (5-3) qualifies for the Class D-2 playoffs as the #14 seed in the West bracket and will face defending 2016 runner-up Twin Loup (#3 seed) in a Thursday matchup slated for a 6:30 kickoff in Taylor town.

*Daniel Libolt (RB/LB) - CWCE - Ran for 108 yards on 21 touches and scored both Renegades touchdowns from 3 and 78 yards away in CWCE’s epic win over over previously unbeaten Clearwater-Orchard. Libolt, an All-State linebacker and 1000 yard rusher as a sophomore, also had 15 tackles in the game.

All in all, Daniel Libolt has 25 touchdowns this season, which include 18 rushing scores, 2 receptions for touchdowns, two Pick 6’s and 3 kick returns to the house.