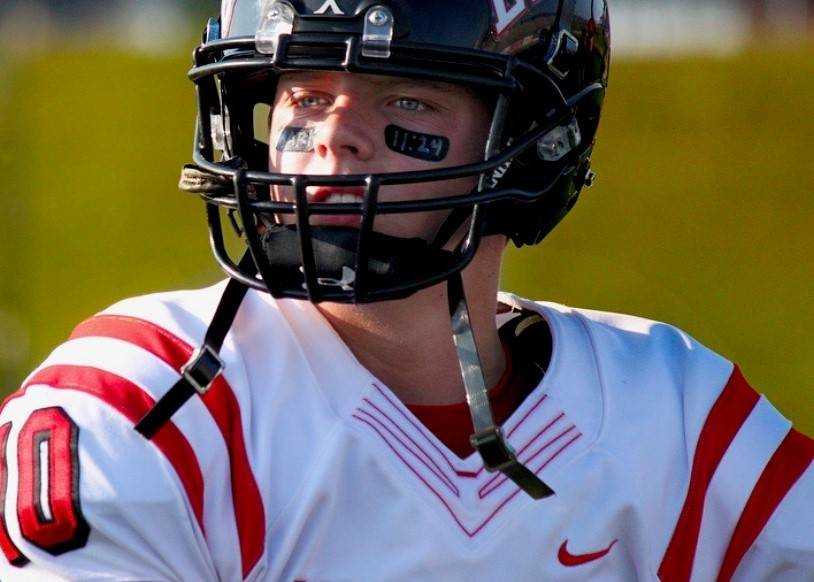 *Cedric Case (QB) - Lincoln High - This guy just doesn’t let up. In a 37-10 win over Lincoln Southwest, Case hit 19 of 29 passes for 372 yards and had a hand in all five Links touchdowns. Blazing Zion Perry was the recipient of three TD passes tossed by Cedric, while Morgan Perry III hauled in the other two.

One of the touchdown tosses to Zion Perry was Houdini-like. Zion lined up outside the tight end on the right side, went in motion and I had to watch the film 4 times to see the ball leave Cedric Case’s hand, as he flipped it a few feet to Perry. The speed demon just blew around his left side after the short flip and was gone to the races in a 59 yard flash. Incredible.

And, don’t you dare forget about that Lincoln High defense. How could you anyway. And the way, this bunch gets in opponent’s backfields frequently to register those humiliating tackles for loss plays. Jack Buchanan (#40) leads the defensive charge with 32 solo tackles, 35 assists, for 67 total stops, with 9 TFL. Ethan Bruha (#50) is next with 47 tackles (5 TFL), then Rushad Rucks (#35) with 39 stops (6 TFL) and Garrett Hoagland (#77) with 31 tackles, 10 for losses.

Altogether, this unit has 54 tackles for loss and 20 sacks, 6 INTs and 8 fumble recoveries.

The Links have a home date with Millard West this Friday. You may find out a lot about this Links football team on that day. Not me. I know this team can make a deep playoff run. These kids have played together for a long time.

*Dylan Egr (ATH) - Wahoo - There is a reason why “ATH” appears following Dylan Egr’s name. Flashback to last Friday’s game with No. 1 Aquinas and you will know why.

No gaudy stats for Egr, just the fact the kid was everywhere in Wahoo’s 34-13 win over the Monarchs. The fantastic senior brought an Aquinas punt back 53 yards for a score, intercepted a pass and turned that into a 47 yard Pick 6, then threw a 27 yard TD pass toward the tail end of the game. In all honesty, I’m thinking Egr probably was instructed not to do that, but kids will be kids.

Dylan Egr was part of that very stingy Warrior defense, that held Aquinas to 196 total yards. This unit has given up only 43 points in 7 games, entering the regular season finale against cross-town rival, Bishop Neumann.

One just has to believe Dylan Egr is one of finest all-around athletes in 11-Man football. A real game changer to say the least.

*Simon Otte (ATH), Garrett Snodgrass (ATH) - York - Dukes rushing juggernaut really pounded out the ground yards in York’s 35-7 win over Seward. Snodgrass gained 194 yards on 18 totes and scored touchdowns on 1 and 90 yard scoring trips. Otte ripped off 182 yards on 17 carries and two scores in the win over the Bluejays.

Otte and Snodgrass are neck and neck in the rushing category. Simon Otte is in front with 769 yards on 90 touches, while Snodgrass is not far back with 705 yards on 88 carries.

What makes things worse for York’s opponents is their two-headed passing monster in the form of Snodgrass and Nick Westkamp. Yeah, Two. Weskamp has completed 38-88 throws for 697 yards and 6 scores. If you want deadly accuracy, the elder Snodgrass (Head Coach Glen) simply has son Garrett throw. His stats? 24 of 31 for 483 yards/6 TDs.

Expect another deep playoff run for York. Been there, done that for this team.

*Tanner Wroblewski (QB) - St. Paul - Senior Dual-Threat QB got warmed up for the critical Central City matchup this week by hitting 9 of 11 passes for 125 yards and two TDs. He also ran the football 13 times for 157 yards and an additional 3 scores, as the Wildcats crushed Twin River, 84-13.

Wyatt Placke reeled in a 17 yard scoring reception in the route and big Carson Morgan, the glue-handed, clutch wide receiver, caught a 16 yard TD pass from Wroblewski. Morgan had three receptions for 40 yards and 6 tackles on defense, one of which was a tackle for a loss.

Speaking of tackles for losses, All-State lineman Hunter Kocian logged 4 of those babies against Twin River, part of his 9 total crunches.

Sievers also had a 2 yard TD run, Ben Zach added a 28 yard scoring sprint, Alex Stumpff recovered a Ralston fumble in the end zone for another, and Billy Higgins closed out the scoring with a quarter 6 yard run.

How would you like to be a marked man for a 3-6 football team? If you watch film on this amazing running back, you just cringe on some the hits this poor kid has had to absorb, yet he still keeps ticking.

The dude’s middle name must be Braveheart.

*Kobee Olson (RB), Jackson Davis (QB) - Hyannis - Whoever kept stats for the Hyannis/Minatare was a busy little bee last Friday. Hyannis came out on top 71-68 and Kobee Olson and big ole Jackson Davis had themselves quite a night to say the least.

Going into the regular season 2:00 pm MST finale vs. Hay Springs, junior Jackson Davis has completed 65% of his 98 aerials for 1,121 yards and 19 TDs with only 3 picks. Olson balances out that offense with his 1,181 yards rushing.

*Dylon Zink (RB) - Ogallala - Hey, this kid is only a sophomore and already running like a senior in Class C-1. In last Friday’s exciting 35-28 win over Gordon-Rushville, Zink ran for 192 yards on 27 carries and two touchdowns.

Heading into what appears to be the 4-4 Indians final game of 2017, Dylon Zink’s rushing total is sitting at 950 yards with 7 TDs. New Head Coach Brent Bauer has to be thrilled that Zink will be around for two more seasons.

Let’s get that that thousand yards against Mitchell, Mr. Zink

*Tucker Scherbarth (RB) - Harvard - Plain truth is, you don’t get many carries when you beat somebody 68-0 in 6-Man football. Such was the case when Harvard zipped past Red Cloud last week.

Scherbarth mad the most of his 6 touches though, cruising for 223 yards and four TDs. Gee, the 5-7, 145 pound Scherbarth only averaged 37 yards a carry.

Seriously, this young man is something special for super coach Scott Trimble down there in Harvard. Tucker has already rushed for 1,161 yards and 21 touchdowns this season. Last year, Harvard made it all the way to the 6-Man state semifinals where they were beaten 38-16 by a strong Cody-Kilgore squad.

Tucker Scherbarth ran for 1,709 yards in 2016 and has 16 consecutive 100 yard plus rushing games. The dude has never been held under a hundred yards rushing during his junior or senior seasons. Not many can make that claim.

Ragland has been a mainstay for the 5-3 Knights this season, who have completed their regular season and await their post-season playoff seeding. Lourdes is sitting at No.17 in the D-1 wild card point standings.

One of the most feared punt return men in the state a year ago (6 TDs), Menicucci has been used sparingly in 2017, returning only one kickoff and one punt. But when you become the featured back and run for 1,120 yards in just 6 games, things change.

You know what, Yutan is a dangerous football team that has had the misfortune of opening against Battle Creek, Centennial and Logan View. That, and not getting to play scheduled games against Omaha Brownell-Talbot and Humboldt-TRS due to forfeits. Oh boy.

It’s been a crazy 2017 for Yutan, but they do get to close out the regular season with a great matchup with Lincoln Lutheran, then it’s off to the post-season for the Chieftains and *Brylan Menicucci if they can get past the pass happy Warriors.

*Gavin Avery (RB) - Centennial - And you thought the Broncos only threw the football. Nope. St. Paul coach Rusty Fuller said Centennial is a very versatile team who can hurt you in many ways.

The 5-8, 138 pound Avery is pretty slippery, as witnessed by his 176 yards on 19 carries explosion in Centennial’s 42-7 win over Cross County. Avery scored TDs on 15 and 4 yard jaunts, which raised his 8 game rushing total to 706 yards. You have to keep track of Gavin at all times because he has 2 receiving scores too.

On defense, the 138 pound Avery has 29 tackles, an interception and three fumble recoveries for the C-2, top rated Broncos.

This is a fine football team from Oshkosh with a sparkling 6-1 record. Garden County is currently tied for 6th in the Class D-2 wild card standings and undoubtedly receive a first round home game when the D-2 playoff seedings are released Saturday.

*Kyle Smith (QB) - Allen - The Cardinals needed every one of Smith’s 246 yards to defeat Emerson-Hubbard 44-27 last week. Smith, who toted the ball 31 times in the win, scored 3 touchdowns and logged 8 tackles on defense. That raises Smith’s 7 game rushing total to 1,117 yards and a whopping 20 rushing scores.

Smith, a 5-11, 165 pound junior, is also Allen’s quarterback. Although the Cardinals only throw 5 or 6 times a game, Smith still is a threat, completing 27 of 44 passes for 454 yards and 3 TDs thus far. He has also made 46 tackles this season and does all the kickoffs.

Allen is 5-2 right now, will make the D-2 playoffs, and close out the regular season with a home game against 4-3 Wausa.