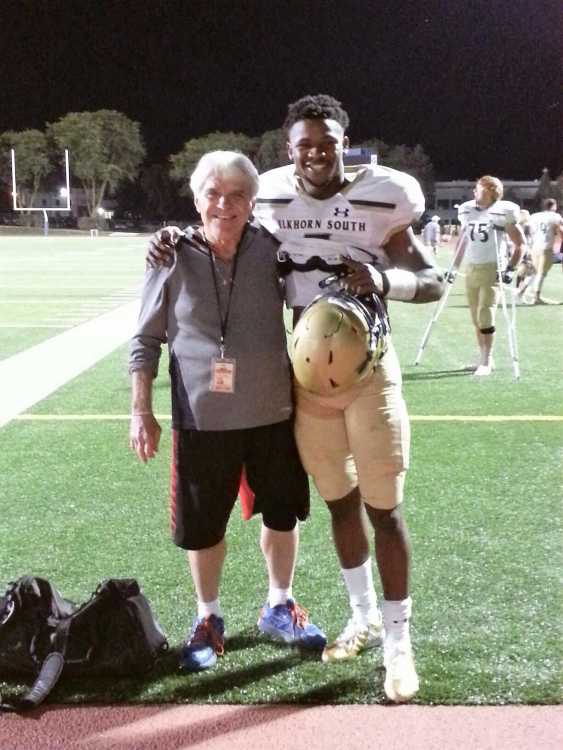 It is only fitting we open this installment of Friday Night Heroes with one of the most prolific Nebraska prep football players of our era, Moses Bryant of Elkhorn South.

We now proceed with the salute.

**Most Career Touchdowns in Class B (101 and counting)

This young man has graced these Friday Night Heroes pages many times, and every single mention was richly deserved. It is a rare feat indeed to rush for over 5,000 yards in a career, only 41 have pulled it off…..ever. But to rush for over a thousand yards all 4 years in high school is going where only three others have gone…….and only one other 11-Man player, in history.

Mike Brower of Fillmore Central would the only 11-Man player ever to be a 4-Time 1000 yard rusher. Brower accomplished the feat during his playing years, 2000 thru 2003 and ended his fabulous career with 6,099 yards. (7th All-Time).

The great Brandon Holtorf of Prague was actually the first Nebraska schoolboy to record this 4-year thousand yard rushing feat. The Prague quarterback played from 1998 to 2000 and not only ran for a thousand yards all 4 years, but the incomparable Holtorf also surpassed the 1000 yard passing plateau every year he played football in high school.

The 3rd, and most recent athlete to enter this hallowed 4-Time 1000 Yard Club was Creighton’s Jacob Morrill. The Bulldog dandy compiled 5,981 yards during his four year stint at Creighton high school, all in the 8-Man ranks. Morrill’s career rushing yard total still ranks 9th on the All-Time list of 41 players.

To date, in 42 career games for super coach Guy Rosenberg at Elkhorn South, Moses Bryant has zipped for 5,173 yards on the ground, 1,118 coming in 8 games this season. And the hard to believe stat is that Moses has averaged only 14 carries a contest, yet has averaged 8.4 yards a tote, 123.2 yards per game and two touchdowns every time he straps on the pads. And lest we forget, the Sierra Leone, Africa native had to “learn” the game of American football when he arrived in Nebraska.

There aren’t many like Moses Bryant and I firmly believe this young man would not have been able to carve out these numbers without the superior coaching of Guy Rosenberg and his top notch staff at Elkhorn South. I’ll guarantee this kid has not been babied throughout his years with the Storm. That just isn’t the way they do things there.

Now, all that remains for Moses Bryant to win another State Class B Championship for he and his Elkhorn South teammates, and get that offer from the Nebraska Cornhuskers.

Bellar’s 344 Career wins elevates him past Creighton Prep’s Tom Jaworski, who retired from coaching after the 2010 season with 343 wins. Coach Bellar’s 36 year career coaching record? 344-64, a winning percentage of 84%. Difficult to comprehend isn’t it? Imagine coming out the victor in 8 out of every 10 games you play. That transfers into a bushel basket full of playoff appearances, which we’ll tell you about in a moment.

Thirty two of Jeff Bellar’s 36 seasons have been spent at Norfolk Catholic, arguably the most successful 11-Man football program in Class C-1 over the last gazillion years. The word “dynasty” is thrown around too loosely these days, but if any program in the 11-Man football ranks approaches that status, it would be “Catholic”.

You should be sitting down for this next group of stats. In 34 years at Norfolk Catholic, Jeff Bellar’s football teams have qualified for the playoffs 32 times. During those past 32 playoff appearances, Norfolk Catholic has compiled a postseason record of 106 wins and 24 losses. Bellar’s teams have qualified for the semifinals 21 times, played in 15 State Championship games and were crowned State Champions 9 times.

Under Jeff Bellar’s direction, Catholic has been eliminated in the first round only 4 times. The only two times Norfolk Catholic failed to qualify for the playoffs since 1983, came in 1986 and 1995. And in 1995, the only year he was away from Norfolk Catholic, Bellar was the head coach at Norfolk high and led the Panthers to a 7-4 record, an appearance in the Class A playoffs, and a first round win over Bellevue West.

After rethinking this “dynasty” thing, maybe Norfolk Catholic just may fit that status during the Jeff Bellar years.

Who knew what they were about to witness when they walked through the gates last Friday at Omaha Westside? When the game was in the books, Westside had defeated Bellevue West 73-62 in the highest scoring game in Class A history.

Plautz ended the historic night by completing 31 of 46 passes for 438 yards and 4 TDs. Joe Stegman, the 5-10, 170 pound junior, caught 6 passes for 143 yards, Schweigart reeled in 13 receptions for 101 yards and TD catches of 22 and 3 yards, while Jaden Kohls, the receiving threat out of that Warriors backfield, had 6 catches for 97 yards and two touchdowns (10, 43 yards). Kohls also ran for a 10 yard score in the history making game.

Stegman has been targeted 23 times this season, caught 19 of those for 328 yards and a surprising no touchdowns. This is the 2nd straight 100 yard receiving night for the junior WR/SS.

*At the conclusion of this blog, I will post the final team stats for the crazy Westside/Bellevue West 73-62 offensive explosion.

Ducker’s big night pushed him over the one thousand yard rushing mark, where he currently stands at 1,048 yards.

I also might mention that sophomore sensation Zavier Betts caught 7 Dolincheck passes in that contest for 125 yards with 17 yard scoring catch. Cedric Johnson was also prominent on that stat sheet with 93 yards on just 4 receptions.

Hey, Zavier Betts has 39 receptions for 779 yards and 15 TD after 8 games. Are you paying attention Huskers?

*Hunter Pilakowski (RB) - West Point-Beemer - Despite being a marked man he past 3 games, Pilakowski still managed to grind out 58 yards on 15 carries in the Cadets big 35-28 overtime win over Pierce. That pushed Hunter over the 1000 yard rushing mark with 1,013 yards.

The dream season keeps on building for 8-0 West Point-Beemer as they head into their season finale with powerful Norfolk Catholic. This home game for the Cadets will give them a great opportunity to knock heads with the best in C-1, entering the playoffs.

*Miko Maessner (RB) - Kearney - The long striding sophomore speed burner swept his way to 160 yards on 15 carries and a 68 yard TD run in the Bearcats impressive 24-7 win over then Class A No. 5 Creighton Prep.

Maessner, who has clocked sprint times of :11.1 and :22.4 as a freshman, was a difference maker in that Creighton Prep win. The even more impressive fact was that Creighton Prep knew exactly what was going to happen when Maessner entered the game as the lone back in that Bearcat backfield……. the dude was getting the ball on a pitch play every single time.

You will continue to see more of this young man in the Kearney high backfield so he can balance the power running of effective senior Matt Stute, a terrific force who loves to crash into the heart of that defensive line.

*Macrae Maschka (ATH/QB) - Arcadia/Loup City - Talk about taking the game into his own hands, the senior leader pirated a Central City pass at the Arcadia/Loup City one yard line to preserve 16-8 victory for the Rebels, who clinched a District championship in the process.

With both of the Rebels top running backs on the shelf with injuries, including All-State candidate Tige Calleroz, the determined Maschka took up the huge slack by rushing for a grueling 112 yards on 27 carries. He also completed 4 of 9 passes for a modest 48 yards, but two of those four connections went for touchdowns to slender 5-9, 145 pound All-State candidate Nolan Baker. The scoring receptions by Baker covered 7 and 20 yards.

So, what’s so huge about Macrae Maschka’s 112 yards rushing? The man is primarily a passing quarterback, having already thrown for 968 yards and 9 TDs. Prior to the Central City game, Maschka had only rushed 37 times for 118 yards the past seven games. How valuable is this kid to the Rebels offense? Huge. We already know his value on 8-0 Arcadia/Loup City’s defense.

*Deshawn Bates (ATH) - Boys Town - Just another night at the office for the speedy, shifty Cowboy runner. Boys Town hands Arlington a 31-0 defeat and Bates rushes 15 times for 178 yards and scores three times from 10, 3 and 5 yards out. The amazing Deshawn Bates now has 1,293 rushing yards for the season.

I know this is getting to sound like a broken record, but no Class C-1 coach in the state wants to draw Boys Town in that opening playoff round.

*Cade Elwood (QB) - Millard North - Zoomed past the 1000 yard rushing mark for the second consecutive season by punishing Fremont with 192 yards on just 15 touches. Exactly one third of Elwood’s carries went for touchdowns in the Mustangs 56-14 win over the Tigers.

Elwood executed that Mustang offense to near perfection, scoring five times on runs of 21, 1, 74, 12 and 30 yards. That lifts Cade’s 2017 season rushing total to 1,052 yards with 20 touchdowns. The evens Millard North’s record to 4-4 heading into the final regular season game with rival Millard South.

Jenkins has rushed for 3,666 yards and 63 TDs in his career. He has also completed 15 of 29 passes for 261 yards and 4 TDs and caught 20 passes for 286 yards and 3 more scores. On the defensive side of the ball, where all 6-Man teams play “man-to-man” defense (long standing joke), Jenkins has made 214 tackles (131 solos), intercepted 6 passed and recovered an astounding 12 fumbles.

…..and now those teams stats from the Omaha Westside/Bellevue West game;