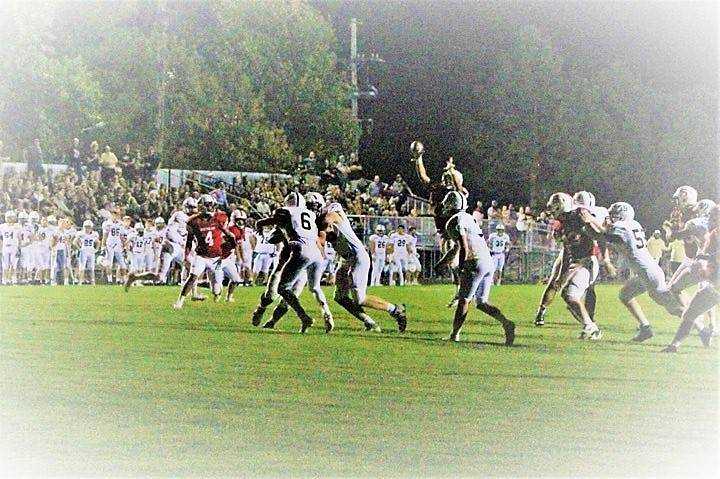 Scottsbluff 5-8, 170 LB Pablo Cervantes iii leaps high in the air to pirate a GI Northwest pass. Cervantes would score on the play, giving the Bearcats the clinching TD in the 34-27 victory. *(photo courtesy of Mrs. Bruner)

Just a couple of items before we introduce you to our 2nd group of Friday night Heroes.

I wish to correct an error that appeared in my salute to Tige Calleroz of Arcadia/Loup City. I stated he had NO touchdowns against St. Paul. I swore that when I looked at MaxPreps late Sunday night, it read that he 300+ yards but no TDs. That would be a rare occurrence, but I rolled with it because I like to get these Friday Night blogs out early and I’ll tell you why.

I like to get this information out as early as possible, but there are drawbacks because some of the stats are not out yet, or incomplete. You run the risk of errors but it’s a risk I take every week. In short, I do apologize for the missing touchdowns, Mr. Calleroz.

The second item is that Coach Snodgrass informed me that Simon Otte, who had out with an injury and has only been able to practice 5 times, broke the record for tackles in a game playing McCook. Simon recorded 19 tackles, eclipsing his brother Jonah Otte’s record of 17, established in the Ralston playoff game back in 2014.

York’s Simon Otte may well be the best all-around football player in Nebraska.

*Pablo Cervantes iii (LB) - Scottsbluff - The play of this young man against GI Northwest in the Bearcat’s 34-27 win just made my head spin. This kid is 5-8, 170 pounds and plays the linebacker position like he is 6-3 and 220 pounds.

Cervantes not only clogged up the middle for that Scottsbluff defense, but the talented senior leaped high in the air (see photo), tipped a Carter Terry pass, brought it down and raced 7 yards for what proved to be the winning touchdown. There was 7:04 remaining in the game but with everything that transpired, the Pick 6 was huge.

Pablo recorded 12 tackles on the night and caused continuous havoc for the Northwest offense. It seemed as though Cervantes was in on every stop and the hops he displayed on the Pick 6 tip/catch was nothing short of phenomenal.

I salute Pablo Cervantes iii today. This young man illustrates what high school football is all about. The dude plays the game the way it is supposed to be played.

Coaches from every corner of the state would take a dozen “Pablos” if they existed.

*Chris Busby (RB), Keegan Reifschneider (WR), Garrett Nelson (TE/DE) - May as well give these three Scottsbluff juniors some props while we’re at it. Busby looked very good running the football for the ‘Cats. The elusive, shifty RB ran for 128 yards on 20 carries while chalking up a couple of 10 yard scoring jaunts. Reifschneider slipped behind the Northwest secondary for two 1st half touchdowns that took place in a span of less than 6 minutes. The first TD catch from QB Noah Bruner, covered 25 yards. The second scoring reception was a spectacular 72 yard toss from Bruner that saw Reifschneider leave ‘em in the rearview early in the TD journey.

And Garrett Nelson, the Husker pledge? Did his usual job of disrupting the offense and giving the man with the ball an Excedrin headache with his crunching tackles. He did display some nifty wheels on a quick 37 yard burst right up the gut when he was lined up at fullback.

Quite the crew of juniors here.

*Jevyon Ducker (RB) - Bellevue West - Pretty safe bet to say Norfolk grew awful tired of seeing Ducker’s backside during the Thunderbird’s 48-7 win over the Panthers. The elusive Ducker danced for 275 yards on 20 carries and 3 TDs in the contest.

After five games, the Bellevue West ace has piled up 672 yards only 84 carries with 10 touchdowns. Ducker is averaging 134 yards a contest and is a nice compliment to Thunderbird QB Joe Dolincheck, who has already hit 63% of his 152 passes for 1,387 yards and 22 TDs with only 4 INTs this season.

*Moses Bryant (ATH) - Elkhorn South - Ran for 196 yards on 16 touches and two touchdowns in Elkhorn South’s 59-0 win over Blair. Moses also caught a 60 yard scoring pass from Cole Hanafan, who incidentally hit 10-15 passes for 251 yards and 3 TDs in the game.

You just cannot find enough words to describe this guy.

*Lane Edis (RB) - Mullen - Man, did Edis ever take off against a good Garden County team last Friday. The Bronco flash kicked things into “jet propelled” gear, romping for 286 yards on 26 carries and 6 touchdowns in Mullen’s 56-32 win out there in Oshkosh.

Lane scored on a 5 yard dash in the 1st quarter, but Mullen still trailed Garden 14-6. The 5-10, 160 pound junior changed all that in the second stanza by scoring three times. Edis hit paydirt with runs of 5 and 25 yards, then hauled in a 41 yard touchdown pass from Brady Gracey.

Lane then broke loose for 64 and 53 yard scoring runs in the third, giving the Broncs a 42-20 lead. Two scores by Garden County’s Austin Dorman closed the gap to 42-32 in the 4th quarter, but Lane Edis put things out of reach with a 3 yard run, then a 30 yard Pick 6 for Mullen.

Edis also made 7 tackles on defense, had a 2nd INT, did the punting, returned 2 kickoffs and then gave a class on calf roping on the ride back to God’s Country.

Your next member of the 5,000 Career Yard Rushing Club?

*Drake Gilliland (RB) - Mitchell - Soared over the thousand yard rushing threshold for the 2nd straight year with his 301 yard/3 touchdown performance against Gordon-Rushville. That was in a losing cause by the way, as the 4-1 Mustangs topped Mitchell, 40-28.

The electrifying Gilliland now has 1,259 yards for the season and has blasted for an amazing 3,797 yards in his last 22 games. Most defensive units only know what Gilliland looks like from the backside.

Millard South was already missing starting RB Ryan Lawrence when Harris escaped on an 87 yard scoring journey that clinched the win for the now resilient 3-2 Patriots.

*Quentin Moles (RB) - Bloomfield - It took only 10 carries for last season’s 8-Man rushing champion to ramble for 309 yards and Six TDs in the Bees stinging 76-8 victory over Elkhorn Valley.

Moles, who ran for 2,511 yards and 35 TDs a year ago, broke loose for TD runs of 68, 76, 23 and 12 yards in the opening quarter against Elkhorn Valley, added a 41 scoring run in the 2nd stanza, then capped off his short night by scooting for a 52 yarder on the opening possession of the 3rd quarter.

Moles 2017 rushing total stands at 870 yards after half a season.

How about this West Point-Beemer team? Troy Schlueter’s forces are now 5-0, rated No. 10 in C-1, and are outscoring their opponents 210 to 71. Pilakowski now has 839 yards on the ground and could very well be the first 1000 yard rusher in West Point-Beemer school history. The two schools merged in 2006.

Hahn has reached 500 receiving yards right on the button for the season. This lad was a standout for Johnson-Brock as a freshman, hauling in 585 yards receiving a year ago. Hahn actually looked like he had a couple of years under his belt last year. Very poised for a freshman.

Speaking of Cole Fossenbarger, the very slender 130 pound junior has completed 54% of his 123 throws for 1,119 yards and 16 TDs with only 4 INTs, three of which came in that Diller-Odell loss.

Johnson-Brock is only 2-3 this season, but their losses are to D-1 No.1 East Butler, Nebraska Lutheran (Waco) and Diller-Odell. All three are undefeated.

*Brett Simonsen (RB) - Sutton - 5-8, 180 pound junior rushed 25 times for 165 yards and a touchdown in the Mustangs 44-0 shutout of Shelby/Rising City. Simonsen, who has only one game under a hundred yards rushing, is at 592 yards right now for a fine, balanced 5-0 Sutton squad.

*Ashton Dohmen (RB/LB) - Humphrey/Lindsay Holy Family - 13 touches, 156 yards and a touchdown in the Bulldogs 46-14 victory over Elgin Public/Pope John. Dohmen also caught a TD pass and recorded 14 tackles for the Bulldogs, who are 1-3.

This 5-10, 150 pound dynamo is one of the top linebackers in all of 8-Man football. Just a shining star for this Humphrey/LHF football team. Ashton already has 73 tackles (32 solos) this season and has an unbelievable 434 stops in his career thus far. Four hundred thirty four. Let that process for awhile.

Dohmen was in on 96 tackles his freshman season, then followed that up with 134 and 131 tackles respectively going into 2017.

This young man is a rock solid All-State candidate at LB and is coached by the legendary Bill Mimick, who has 231 victories in his 42 year coaching career. I played against the all-state Bill Mimick when he was ruling the gridiron and the hardwood for Columbus St. Bonaventure in the mid-60s. You don’t have to ask how well I fared against Mr. Mimick back in the day.