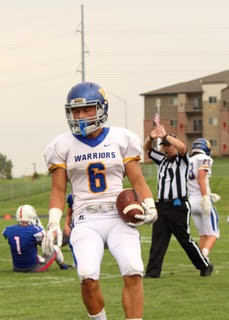 Wahoo RB Dylan Egr. The senior broke the school record for points in a single game with his 36 vs. Louisville last Friday.

The versatile Egr is averaging 9.4 yards every single time he touches the ball and has accumulated 668 yards in just 4 games this season with 13 touchdowns. Last season, Dylan ran for, 1,116 yards and 13 scores, so he’s already matched his touchdown total from the entire 2016 season.

And dare we not forget that Dylan Egr is one of the most feared punt return men in 11-Man football.

In the Chargers 74-6 victory I saw last Thursday over GI Heartland Lutheran, Martinsen rushed 9 times for 173 yards and 3 TDs, completed 5 of his 6 passes for 168 yards and 4 more scores, plus made 11 tackles on defense. Every one of those tackles stung too, I’ll guarantee you.

Such is the life of a man among boys in the game of 6-Man football. And he’s just a Junior.

*Dylan Kautz (RB), Kelby Schaefer (FB) - Norfolk Catholic - It seemed like feast or famine for the speed merchant Kautz in that 48-35 win over Boone Central/NG last Friday. The Cardinals defense would either gang tackle him at the line of scrimmage or Dylan would break free for a long touchdown run.

After all the wind, lightning, rain and hail passed, Kautz piled up 235 yards on 26 carries and broke loose for touchdown scampers of 4, 58 and 51 yards. That raises Nebraska’s Fastest Human’s rushing total to 807 yards after only 4 games.

And how about Kelby Schaefer? On the Knights 2nd play from scrimmage, Schaefer busted through Boone’s defensive line so quickly they only saw his backside as the fleet 5-10, 175 senior sprinted 66 yards untouched for a TD. Then in the 3rd quarter after Cardinal QB Dylan Gentrup pulls of a highlight reel 76 yard pass completion to Cody Nelson, Schaefer comes up big again.

The following play, with the ball on the Norfolk Catholic 4 yard line, the center snap sails over Gentrup’s head and Kelby Schaefer is right there to scoop it up and jet 80 yards for a Knights TD. Schaefer also made 4 tackles on defense, returned 2 kickoffs for 26 yards and caught a couple of passes for 9 yards.

This dude comes up big time when Catholic needs a big play.

*Milton Sargbah (RB), Zander Gray (RB) - Omaha North - The finest 1-2 running punch in the state absolutely tore up Lincoln Southeast’s run defense in the Vikings 49-28 win over the Knights. And don’t kid yourself, Southeast has a pretty solid defense, I’ve seen it live.

Zander Gray carried only 13 times but ripped Southeast for 268 yards and 3 TDs. The Dancing Bear ran for scores of 1 and 21 yards, then uncorked a dazzling 94 yarder. It was a pretty sight watching the 6-0, 245 pound Gray pull away on a 94 yard TD dash.

Is this the best one-two running punch in Class A history? I’m beginning to think it just may be and I’ve been watching Nebraska prep football since God was a kid.

Live anywhere near Grand Island? Omaha North comes to GI this Friday night. Worth the price of admission to see Gray and Sargbah play, plus the Islanders traditionally have a strong defense.

*Jack Strong - Lincoln Southeast (QB) - The outstanding 4 year starter may have exposed a weakness in that Omaha North defense despite the 49-28 loss. Strong completed 19 of 31 passes for a huge 323 yards and 3 touchdowns. He did suffer 2 INTs but 323 yards is a lot of damage.

The Knights Cade Cooper reeled in four Jack Strong passes for 64 yards, three of them going for TD receptions covering 4, 9 and 29 yards.

This is staggering. In just 12 career games, Trent Reed has rushed for 2,967 yards and 52 touchdowns. Add 433 receiving yards with 4 more TDs and 96 tackles, 6 INTs and a recovered fumble and……..I’m speechless.

Oh, I failed to mention Trent Reed leads the entire nation in 6-Man rushing yards and by a large margin.

*Cole Schaedel (QB) - Lincoln Lutheran - So, what transpires when your three year starting quarterback, who’s thrown for over 3,500 career yards, goes down with an injury and your team is about to face a team that is 3-0 and has outscored their opponents 180-26?

Simple, just switch your wide receiver to quarterback. That’s exactly what Lincoln Lutheran did and it resulted in a wild 56-40 victory over previously unbeaten Lutheran High NE of Norfolk.

Must be nice to have a quarterback lurking in the uniform of a wide receiver that can come in and throw for nearly 350 yards. You Da Man, Cole Schaedel.

*Jaxson Kant (QB) - Lutheran High NE - Hey, you have to give the quarterback for the losing team some kudos when he is responsible for a portion of the 40 points they put on the board. Jaxson did hit 17 of his 28 passes for 232 yards and 3 TDs in that Eagles 56-40 loss to Lincoln Lutheran. No, Korrell Koehlmoos contributed too. The junior star caught a 53 yard scoring pass from Kant and returned a kickoff 85 yards for another TD. The Warriors did hold him to 92 rushing yards, but Mr. Koehlmoos is on his way to a 1000 yards I tell you.

*Trevor Siroky - David City Aquinas (PK) - Booted a 24 yard field goal with 15 seconds left in the game to lift the No. 1 Monarchs to a 17-16 win over Columbus Scotus. It was redemption for Siroky, who missed on a 30 yarder with 8:46 left in the 4th. Trevor can be forgiven on that one due to a high snap that threw off his timing.

Kyle Petree was a force on the ground for Aquinas, gaining 132 yards on 26 carries. The Monarchs remain #1 in Class C-1 despite to scare to longtime rival Scotus.

*Brayden Sharp (DB) - Norfolk - Made a game saving tackle on Lincoln North Star’s Matt Alexander on the Panthers 30 yard line to preserve a Norfolk 38-37 win over the Gators. Alexander ran 63 yards before Sharp got to him.

Yes, there were 47 other minutes of football in that contest, but when a kid like Brayden Sharp makes a game saving tackle like that, it goes down in Panther football history as Coach Tom Olson so aptly put it.

I’ll recognize a young man like this every time if I hear about it. Brayden, you’re a hero, a Friday Night Lights Hero, matter of fact.

Reimer also had 6 receptions for 59 yards in that Norfolk loss, but Mark Waller lined Luke up in the Wildcat formation on the first play from scrimmage and he proceeded to run 80 yards for a touchdown. Reimer then later hit the replay button, ran the same play and scooted 72 yards for another North Star score. I’m not sure he was even touched on that one.

Luke scored his 3rd touchdown on an 11 yard run. The multi-talented junior also made 8 tackles from his strong safety slot against the Panthers…...all solo stops.

Navigator head coach Mark Waller thinks Luke Reimer is one of the best football players in the state that nobody knows about. We concur, Coach Waller.

After four games, the 1000 yard rusher from a year ago, has amassed 523 yards on 64 touches and scored 8 TDs. Pretty good for a back playing for a 1-3 football team. Jerome Barnes can flat out fly and has all the moves, friends.

140 pound junior Reece Foreman caught 2 of Wyatt’s scoring passes (14, 41 yards) while steady junior Jackson Hirschfeld reeled in the other scoring reception covering 26 yards. A third member of that Centennial junior class, Gavin Avery, rushed for 113 yards on just 11 carries, one of which was a 13 yard TD run.