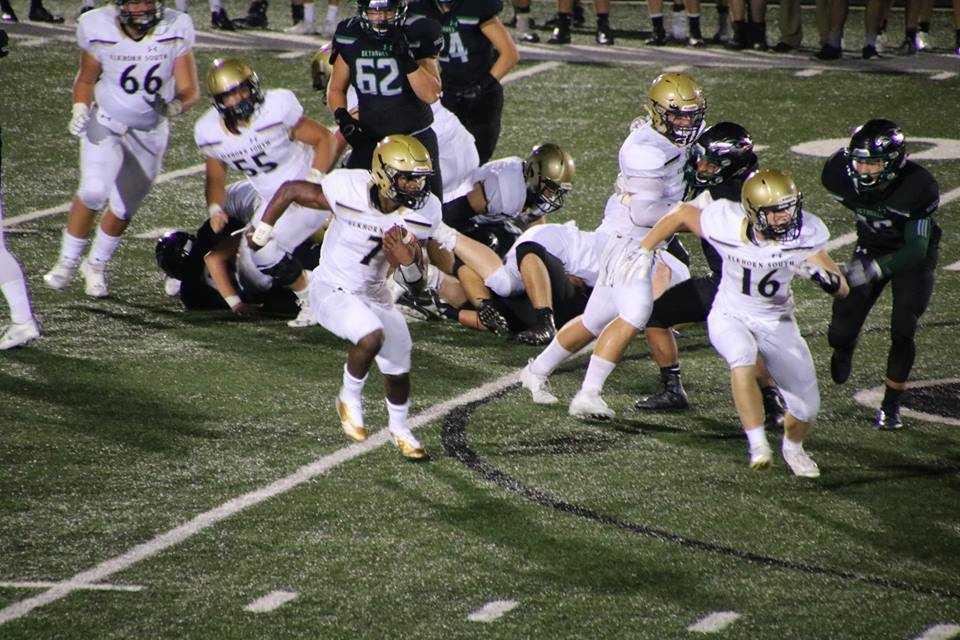 No need for idle chatter today my friends.

*Moses Bryant (RB/ATH) - Elkhorn South - Our headline today is the man that parts the Green Seas on Friday nights, Moses himself. This Moses may not be a biblical character, but he does perform some minor miracles on the gridiron for super Coach Guy Rosenberg and the two-time Class B Champion Storm.

One week Moses Bryant is running for 280 yards, the next time out, like Friday’s 66-0 win over Plattsmouth, it’s limited action in the form of 84 yards on 9 touches and 3 TD runs (6, 8 and 18 yards). Throw in an 18 yard reception and an INT on defense and Moses called it a night. Effective either way

The 190 pound senior has also amassed 5,232 All-Purpose yards during his stint at Elkhorn South and made 36 tackles on defense, plus made countless plays that never show up in the stat line. And you want to know another staggering fact?

Moses Bryant has touched the football 667 times during his career that I know of, and fumbled only ONCE. ONE TIME. Makes your head spin when you consider how rigorous the battles can get when the Class B elite clash week in and week out.

All I can figure is that some of Moses Bryant’s greatness has rubbed off on his Storm teammates because he and his brothers at Elkhorn South are working on pulling off a 3-Peat as Class B champs in 2017.

*Cade Elwood (QB) - Millard North - Freddy Petito lost a lost of great football players to graduation, and not to mention his beloved wife recently, so you might figure Millard North may be a bit slow out of the gate in 2017. Well, it took only 2 games for Mustang QB Cade Elwood to shake that slow start.

In Millard North’s 62-35 win over Papillion LV, Cade turned on the his Mustang jets to the tune of 229 yards on 22 carries. And Elwood’s 7 touchdowns tied the state Class A record for most TDs scored in a single outing.

Elwood’s touchdown scampers were from 16, 9, 8, 14, 8, 39 and 6 yards away. Cade also had a partner in crime in that Millard North backfield, in #9 Spencer Weber. The senior matched Elwood’s 229 yards but had 3 more touches. Spencer also scored a touchdown.

Funny thing about Spencer Weber is that the guy only had 37 yards on 9 carries coming into the Papio game. Hey, that’s just the way they do things at Millard North. Should also mention that Cam Wiemers had 11 tackles on defense for the Mustangs, who go head to head with Creighton Prep this Thursday night.

*Connor Barnett (QB) - Papillion La Vista - Yeah, Papio lost to Millard North 62-35, but somebody had to account for some of those 35 points, and that “someone” is Barnett, the 6-0, 175 pound Monarch junior signal caller.

Connor completed 5 of 10 passes for 137 yards and 3 touchdowns, but he’s most dangerous when he runs the football. 201 yards on 17 carries and a TD is exactly what Barnett did in that Millard North loss. So, not only did Connor Barnett have 338 combined rushing/passing yards, but he had a hand in all 5 Papio scores that night.

True Dual-Threat quarterback who actually started 3 games for Coach Randy Huebert a year ago for the Monarchs. Not exactly a rookie here.

*Matt Masker (QB), Brett Kaiser (WR) - Kearney Catholic - I wonder if Ogallala saw this coming? Yeah, I’m sure they knew about Matt Masker, and who doesn’t, but he has to throw those passes to someone, right. Enter one Brett Kaiser.

With Scott Frost’s Career Passing TD record in the rearview, Masker may just been relaxed enough to complete 20 of 29 aerials for 423 yards and 4 TDs. Five of those 20 completions went to Brett Kaiser, good for whopping 238 yards and 3 TDs as the Stars nailed Ogallala 35-6 out there.

Tell you what, when you have a 6-3, 215 pound Matt Masker hooking up on the gridiron with a 6-3, 200 pound Brett Kaiser, you have a couple of dudes that are awful tough to defend. You want to stay away from Kaiser on defense too. He already has 21 tackles, 12 of which are solos.

*Dylan Gentrup (QB), Levi Krueger (RB) - Boone Central/Newman Grove - Coach Mark Hudson has the Cardinals back in the C-1 limelight, football fans. I was on that football field in Albion a year ago when O’Neill came in and humiliated Boone 38-0. Gentrup and the boys made sure there wasn’t a replay on that baby this time around, but nobody could have seen the Cardinals 42-0 trouncing of the defending C-1 champions coming.

The 6-2, 195 pound Gentrup ran for 65 yards on 13 carries and a touchdown in the game and as if that wasn’t enough, the rangy QB added 4 of 5 passing, good for another 74 yards and a score. Dylan didn’t do it all by himself up there in front of those rodeo-arena type grandstands up there in O’Neill though.

Big number 30, the 5-9, 205 pound Levi Krueger churned for 129 yards on 24 carries and crossed the goal line three times on the night. Hey, Krueger has been there all along if you missed it. The senior battering ram ran for 164 yards against Pierce in the opener and 94 in the 34-30 loss to Wayne. Three games, 360 yards, 6 TDs…….not too shabby after just 3 games.

And how about that senior-laden Boone Central/NG defense? Hold O’Neill to 69 yards passing and 86 rushing yards? Solid Jackson. And it isn’t just a few players contributing for this unit. All 11 have a hand in the fun.

The real test for Coach Hud and the boys comes this Friday when No. 1 Norfolk Catholic comes to Albion. Will I be there? Is the Pope a Catholic?

*Daniel Libolt (RB) - CWCE - Trust me when I tell you Daniel Libolt is one of the very best players in all of 8-Man football. After missing several games last year with a broken hand, Libolt is back with a vengeance in 2017 and before the curtain closes on his illustrious career, Daniel could very well have been named All-State on both sides of the football. (All-State LB as a sophomore in 2015)

Here is what just plain hurts about pounding opponents week in and week out for starters like Daniel Libolt. CWCE (Chambers/Wheeler Central/Ewing) has defeated Niobrara/Verdigre 76-8, Pender 52-16 and that 81-8 E/EPJ thrashing in the opening 3 weeks. Libolt has carried the ball only 20 times, yet rushed for 425 yards and 10 TDs. He’s averaging 21.3 yards a tote. Fun times?

Ask someone like Daniel Libolt how much fun it is to stand on the sidelines most of the night after scoring on every possession. No other way around it and thank goodness most coaches, like CWCE’s Thomas Thramer, knows you cannot do it any other way. Why, because “what goes around comes around”? Nah, it just isn’t right to run up the score on some undermanned high school football team.

Hey, no worries, Daniel and the boys will get a shot in two weeks when the Burwell Longhorns roll into town.

When Chadwick and the quick-strike Bulldogs got things cranking, the brilliant junior QB blitzed the Norfolk “D” for 331 yards on 15 of 20 sharpshooting aerials in the ‘Dogs 63-28 win. Sensational sophomore Xavier Watts brought in 6 of Chadwick’s throws for 145 yards. Watts also caught 3 out of the 4 touchdown passes pitched by Chadwick.

That’s why Omaha Burke is Number One.

*Jacob Herbek (TE) - Grand Island Central Catholic - So, how do you make this list when your Crusader football team loses a game 63-7? Well, first of all, it’s to #1 Aquinas and secondly you catch 16 passes for 137 yards and your team’s only TD.

The 6-5, 200 pound junior, Jacob Herbek is listed as a tight end on GICCs roster. The young man is going to turn some heads on the football field, as if he hasn’t already, but keep an eye on “Good Hands” Herbek when basketball season rolls around.

*Aiden Young (RB) - Elkhorn High - Aiden “I’m Very” Young is the first ever freshman to start for future Hall-of-Fame Coach Mark Wortman, who has spent 38 years at Elkhorn. You think this kid just may have some talent?

Young seems to be learning Wortman’s system rather quickly. After rushing for 147 yards and two scores in the Antlers first two contests (Plattsmouth, Blair), the youngster rushed for 129 yards on just 9 touches and 2 TDs in Elkhorns big win over previously undefeated Beatrice.

Aiden now has 216 yards and 4 TDs and will test the waters against Omaha Skutt this Friday. And with games remaining with Elkhorn South and Gretna on the horizon, young Aiden Smith will find out if he’s ready for the week in, week out rigors of Class B football.

We think young Mr. Smith is well ahead of schedule at this point.

*Arcadia/Loup City “D” - Put the clamps on another opponent’s offense last Friday in their 42-0 win over Sandy Creek. The stingy Rebel defense held the Cougars to just 147 yards of total offense a week after limiting high ranked Valentine to just 112 yards passing and 90 yards on the ground.