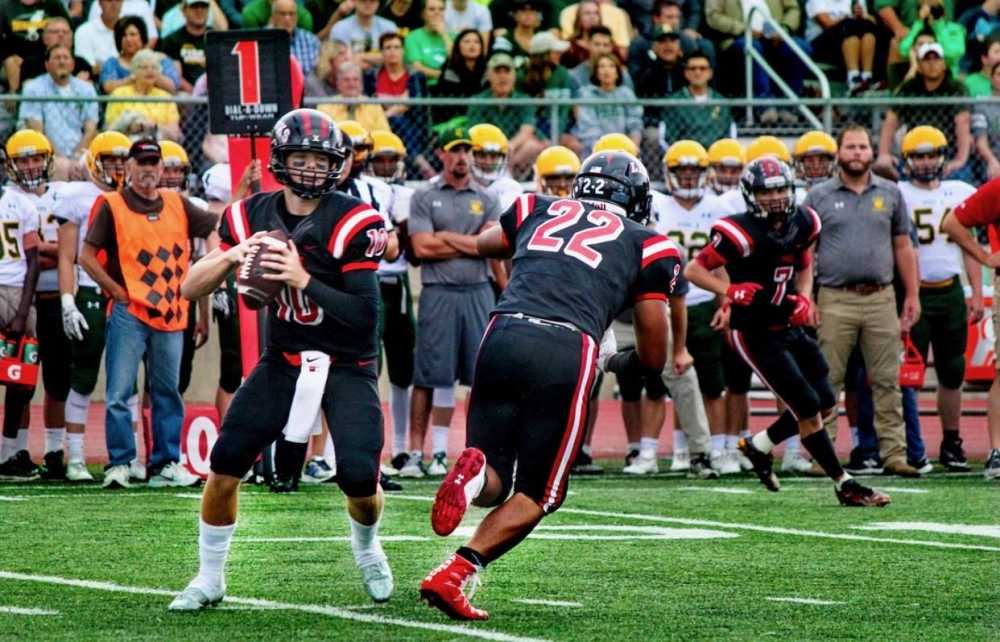 Once again, an abundance of outstanding single game performances and team efforts as well. Then again, it’s all a team effort or you can’t win the game, right?

I’ll get things started with the great story lines coming out of Lincoln High thus far and the feels-so-good tale of a man named Mark Macke, who happens to be doing a top notch job as the Links Head Coach.

*Cedric Case - Lincoln High (QB) - No secret about this young man, who not only possesses a rifle arm, but a deadly, on the money one. In the Links 46-17 victory over Papillion LV South, the junior sharpshooter nailed 20 of 26 passes for 381 yards and 3 TDs. And believe it or not, that’s a 107 yards short of last week’s effort against Pius X.

After just three games, Cedric Case, just a junior, has hit a phenomenal 66 of 83 passes for 1,154 yards, 14 touchdowns and only 1 INT coming in those 83 aerials. And if you think those are mostly short range passes, think again. Not only did Case eclipse the 1000 yard passing barrier for a 2nd consecutive year, but the guy also went over the 3000 yard career mark, and is now sitting at 3,034 yards with 33 TDs. Fabulous.

Trailing 17-14 to the Vikings at the half, Koch kicked it into high gear after halftime with his 400 meter sprint speed and shifty, nifty moves some hadn’t seen yet. When the Plus Size Lady finally sang the closing chord, Michael Koch had hit 16 of 19 passes for 205 yards, and rushed 21 times for another 205 yards and 4 TD runs covering 37, 28 and 17 yards. That gave the Discoverers a lopsided looking 48-30 win over the Vikings.

Nate Slusarski also pirated a Carter Terry pass and took it to the house for a 76 yard Pick 6.

If you haven’t seen Michael Koch play football, you are missing a real treat.

*Carter Terry - GI Northwest - Continued to put up torrid passing numbers despite the losing effort against Columbus. The junior marksman completed 20-33 for 318 yards and 3 TDs in that game. That swells his 3 game totals to 53 of 84 for an unofficial 915 yards and 14 touchdowns.

Dude has a rocket arm like Case from Lincoln High and a talented duo of wideouts to catch those throws in Brady Glause and Riley Schliep.

*Desmond Prusia (QB), Jaylon Walker (RB) - Omaha Bryan - Two helped the Bears to a landmark win Friday night. Prusia hit 13 of 22 passes for 157 yards and a TD, while Walker slipped in for the game winning 6 yard touchdown. Bryan’s 18-15 win over Omaha Central broke a 28 game losing streak for the Bears, dating back to 2014.

That Bryan football team hadn’t tasted victory since their win over Omaha South to kick off that 2014 season.

*James Schroll (RB) - North Platte St. Pats - Speaking of the Irish, how about this Schroll dude? All James did was run through a good Gibbon defense for 278 yards and 3 TDs in St. Pats huge 48-13 win over the previously unbeaten Buffaloes.

He has the ability to plant and cut before he hits the line if an opening isn’t there. Schroll also never wastes yards with fancy footwork. He knows his speed and usually knows if he has a straight line to the end zone. If anyone is in the way, he lowers his shoulder and inflicts punishment that results in yards after contact.

*Devin Merkuris (RB) - Ralston - 180 pound senior ripped South Sioux City for 311 yards on 37 carries and 4 TDs in the Rams 33-6 win over the winless Cardinals. That puts the swift Merkuris at 470 yards rushing for the year. After being held to 36 yards against Beatrice, Devin has reeled off games of 138 vs. Omaha Gross and the 311 against South Sioux.

This guy is a baller. Last season, Merkuris ran for 1,017 yards for a 3-6 Rams club that faced a brutal slate. We’re talking teams like Elkhorn South, Skutt and Beatrice here.

*Adam Wasserman (QB) - Fairbury - Wasserman really exploded in the Jeffs 68-14 win over Falls City. The rock-steady QB ran 15 times for 202 yards and 5 touchdowns. Wasserman had a hand in all six Fairbury first half offensive touchdowns. He opened the game with a 41 yard TD run, found Cayman DeBoer for a 16 yard scoring pass, then promptly reeled off four straight touchdown runs covering 41, 28, 10 and 3 yards. Adam also completed 10 of 14 passes for 111 yards and 2 TDs.

Wasserman’s other touchdown toss was a short 4 yarder to sophomore Seth Firmanik.

*Tanner Hermann (QB) - Wood River - Wait…..Wood River? The team with the 14 game losing streak? Not anymore. In the Eagles 48-20 pasting of Fillmore Central, the 6-0, 180 junior Hermann connected on 19 of his 33 passes, good for 297 yards and 4 touchdowns. Junior Cauy Gideon caught two of Hermann’s TD throws as did sophomore Trey Zessin. Grant Gannon had the remaining scoring catch.

It only took 3 games for new Eagles head coach Jeff Ashby to break that losing streak and things are only going to get better for Wood River. Maybe not next week at North Platte St. Pats, but let’s be patient now.

Boy, 7 for 7 passing will pad the ole accuracy percentage, right Evan? That’s exactly what Reinert did in Oakland-Craig’s 41-7 win over Crofton. Reinert passes were good for 255 yards and 3 TDs in the first half alone and by then the Knights were up 41-0 and it was all over but the shoutin’.

Through two complete games, Reinert has passed for 461 yards with 4 TDs and raised his completion percentage from 50 to 61%. The all-state Garrett Seagren ran under 4 passes for a whopping 141 yards and 2 scores in that Crofton win, while Kobe Bennes had 2 scoring receptions for 145 yards. Huh? Yeah, when one of your TD receptions is a dazzling 99 yarder to the house, it raises the ole receiving yards numbers.

Oakland-Craig is currently rated No. 4 in the World-Herald C-2 ratings, right behind Hartington Cedar Catholic. The two teams do not meet during the regular season.

*Drake Gilliland (RB) - Mitchell - Typical game for the Magic Man. 252 yards, 27 carries, 4 touchdowns in the Tigers 50-14 win over Kimball. In just 4 games, the fleet Gilliland has accumulated 829 yards on the ground, averaging 33 touches every game. When you carry the ball that many times game in and game out, it takes a special player to get through a season healthy. Drake is a smart football man who possesses the skill to avoid big hits. Not a fancy moves type guy, strangely enough, just sleek and smooth like a big cat. Rarely gets held to under a 100 yards. Like once in the last 2 years. Hasn’t been held under 252 yards this year.

One of Nebraska’s most exciting prep football players.

Hey, this guy is rock solid. Poor dude gained 607 yards for a team that didn’t win a single game a year ago. In fact, Johnson CC was shut out 6 times in 2016, only scoring 5 TDs the entire season. Bailey had 2 of those plus 43 tackles (8 for losses). How hard are we pulling for this young guy? I mean, the Thunderbirds are already 2-1 in 2017 and have come within ONE Point of doubling their scoring output from the entire 2016 season.

*Sid DeMayo (QB) - Elkhorn Mt. Michael - Dude sounds like somebody from The Godfather. Well, not really, besides I never watch movies. Anyway, Mt. Mike needed everything DeMayo could contribute to get by Nebraska City 39-36 last Friday.

Ya know, and here’s the optimist in me, Mt Michael Benedictine could feasibly be 6-0 with a few breaks before they hit the horrible 3 game District stretch with Gretna, Elkhorn South and Elkhorn High. Ouch.