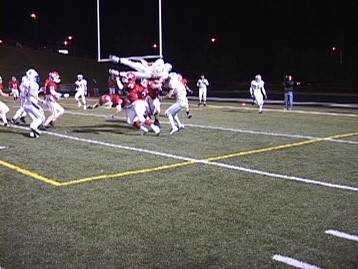 Still one of the greatest prep football photos of all time. Lincoln East QB Jim Ebke going up and over for a touchdown against Millard South.

Straight ahead we go. Nothing surprises me when I dig up these stats. This current generation of football athletes are so fast, so strong and generally so well coached.

Quick hit seven different receivers in the contest, including the two on the connecting end of the touchdown tosses, Brendan Lacey and Cade Belitz.

The multi-talented, jack-of-all-trades Egr bolted for 137 yards on 23 carries and scored twice. Dylan has also set the Wahoo high school record for Career INTS with 8. That puts him in a tie with former Warrior great Jon Abbott, who starred for Wahoo from 2009-2012.

And speaking of interceptions, the Wahoo defense has not had a single point scored on them through the first two games. Tucker Hancock and Kole Bordovsky lead the charge with 11 tackles each, followed by Sam Kolterman and Peyton Walling, who each have 10.

And this Friday, Wahoo is headed for one of the biggest Class C-1 showdowns of the season when they travel to Norfolk Catholic.

*Matt Masker - Kearney Catholic (QB) - Tore up GICC with 342 passing yards and 3 touchdowns with 15 of 24 completion accuracy. Zach Worm, Linden Howe and Alex O’Brien were each on the receiving end of a Masker scoring throw in the 40-13 win.

Matt’s three touchdown passes bring him within one TD of tying the great Scott Frost’s career record of 67. The amazing Masker has completed 64.4% of his 547 passes during his 25 game career. Those 352 completions have been good for 5,147 yards and 66 TDs and only 14 INTs. Hard to comprehend.

I have seen very few prep quarterbacks in this state who can release the ball quicker than Kearney Catholic’s number 11. Anybody that breaks any kind of Scott Frost record is certainly one of the best in my opinion.

This dude is lightning fast on the football field, like 4.57 fast. Darnell ran for 648 yards and 10 scores a year ago, but in addition to being a fine runner, Baily is an extremely dangerous kick return man, taking two to the house a year ago.

After 2 games for the undefeated Bulldogs, Darnell has run for 399 yards and 6 scores. Baily gets a 1000 yards rushing this year and he’s in some pretty heavy company at Auburn. Greats like Luke Lundy, Eric Moody, Quint Hogrefe and Steve Cole. Doesn’t get much better than that.

*Michael Koch - Columbus (QB) - Rushed for 183 yards on just 10 carries and 2 touchdowns in the first half alone, as the Discoverers posted a 44-0 win over Bennington. Koch’s TD runs covered 74 and 26 yards. The super senior also hit 5 of his 11 passes for 128 yards, but also suffered 2 interceptions, both near the Bennington goal line. He connects on either one of those and Columbus hits 50 points or better.

Here is another heads up about this Columbus team. Keep an eye on electrifying sophomore receiver/return man, Joseph Braasch, but don’t blink or you’ll miss him. The fleet Braasch returned 2 kickoffs against Bennington, one he took 90 yards to the house, the other he bolted 60 yards to the Badger 26. Koch took it in for a score the very next play.

And that Discoverer defense, wow. Not overly big dudes, but just relentless pursuing the ball and Koch is an integral part of that Discoverer defensive unit, using 6-4 frame to defend passes. That stingy defense will be tested this Friday when GI Northwest comes into town with sharpshooting QB Carter Terry and speedy receivers, Riley Schliep and Brady Glause.

*Wyatt Ehlers - Centennial (QB) - After having his hands full with Central City a week ago, the junior All-State QB candidate had to produce some big time magic to turn back No. 4 Yutan and their brutal defense last Friday night.

Trailing 25-21 and trying to preserve Centennial’s No. 1 Class C-2 rating, Ehlers found Gavin Avery for a 15 yard, game winning touchdown pass with just 41 seconds left in the contest. For the night, Wyatt was good on 13 of his 27 pass attempts for 214 yards and 4 TDs. That swelled Ehlers 2 game passing yardage total to 524 yards with 8 touchdowns and no interceptions.

This was sweet revenge for Wyatt Ehlers and his Bronco buddies. After completing an undefeated season a year ago, Yutan sent them packing in the opening round of the C-2 playoffs with a 34-6 defeat. After passing for 1,876 yards and 20 scores, that was quite a blow to the sophomore Ehlers and the Broncs.

I can tell you right now, it will take a very good football team to win Class C-2 this season with programs like Oakland-Craig, Battle Creek, Wilber-Clatonia, St. Paul, Yutan, Valentine, Arcadia-Loup City, and Hartington CC in the pool, but this Centennial could be up to the challenge.

*Parker Klinginsmith - St. Paul (RB) - Looks to me like Mr. Klinginsmith liked the sledding against Cross County last Friday night. After running for 65 yards the week before, the 175 pound senior captain erupted for 251 yards on just 12 carries and scored on runs of 75, 31, 64 and 12 yards in the Wildcats 61-6 blowout win over the Cougars.

Versatile St. Paul QB Tanner Wroblewski added a 35 yard rushing touchdown and threw scoring passes to big Carson Morgan (23 yards) and Joe Maus (16 yards) in the game. The highly touted Wildcats get their first test of 2017 this Friday when they travel to meet a tough Valentine team, who thrives on defense.

These gentlemen are pretty salty football players and Freeman’s 2-0 record, plus a 15-0 win over Hastings St. Cecilia, shows it.

*McCoy Bila - Chadron (QB) - Was within a whisper of having a perfect night passing in the Cardinals 42-7 win over Cozad. Coy hit 18 of his 19 pass attempts for 257 yards and 3 TDs in the win after going only 5 for 11 in the Cardinals opener.

Bila connected with Clark Riesen, Jeff Cerney, and sophomore Cooper Huesman for the scores against Cozad. Huseman, by the way, leads all receivers with 103 yards on just 3 receptions. Meanwhile, Bila has hit on 23-30 passes for 337 yards and 4 TDs in Chadrons first two games.

I’ll tell you what, Coy Bila is one of the better quarterbacks in Class C-1 this fall. Even though the Cardinals finished 4-5 last season, Bila hit 146 of 237 passes for 1,534 yards and 13 TDs. Anytime a QB connects on 62% of his aerials in high school football, he would be having a top notch year.

Chadron may just come away with that C-1, District 8 title, but there is always teams like Ogallala and Chase County lurking on the horizon to argue that statement.

*Rhett Jordan - Waverly (QB) - The 5-9, 150 pound junior decided to give the running game another whirl after only rushing for a minus 9 yards on 10 carries the previous week against the powerful Columbus defense.

Worked like a charm. Jordan carried 27 times for 167 yards and 2 TDs in the Vikings wild 38-28 win over Seward. You just have to score lots of points to beat that Seward team with the fireballing QB Joseph Krause filling the air with footballs.

Rhett’s scoring runs covered 1 and 31 yards, while senior Jack Sharp helped out his QB by rushing for two scores of his own. Keep on running that ball, Jordan.

*Joseph Krause - Seward (QB) - You just cannot mention a Seward football game, win or lose, without mentioning Joseph Krause. In that Waverly loss, the 6-0, 165 pound junior completed 18 of 32 passes for a whopping 281 yards and 4 scores, yet the Bluejays came up on the short end of the final tally.

Joseph’s 4 TD passes were handled by two sophomores, Ben Meyers and Davon Brees. Meyers scoring catches covered 34, 19 yards, while Brees hauled in TD strikes of 21 and 25 yards. Meyers had 5 receptions for 100 yards, while Brees reeled in 5 Krause passes for 70 yards.

Joesph Krause probably wonders what he has to do to win football games. Last season as a sophomore, he hit 55% of his passes for 1,669 yards with 14 TDs and Seward won just one game. That was a 55-0 win over Schuyler and everybody beats poor Schuyler.

This season though, Seward is 1-1 and Krause has already thrown for 614 yards and 6 scores with only 1 INT. Ten career games, 2,283 yards and 20 touchdowns….not too shabby. Keep us the good work Joseph.