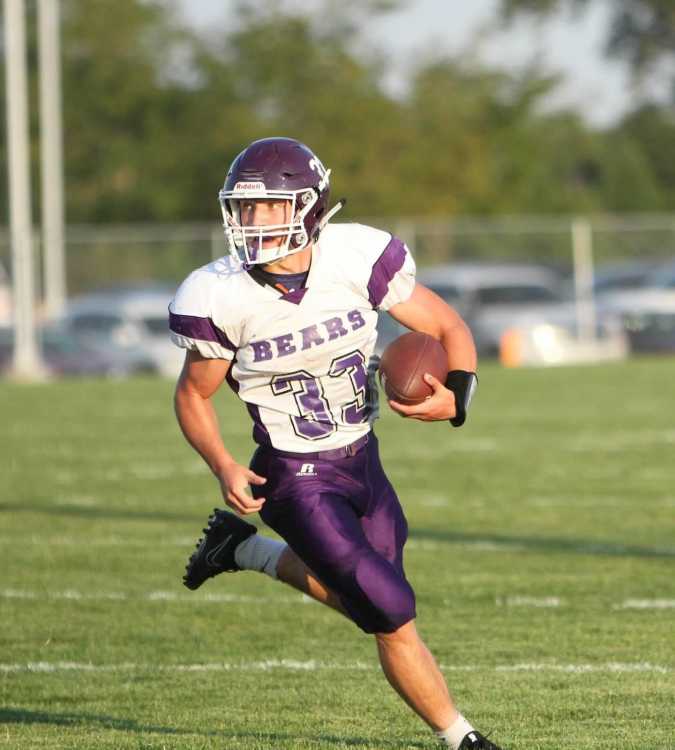 Onward and upward folks. We have so many great stories from Week One, it may take four blogs to cover them all. I love it, the kids deserve it.

*Dalton Lewis - Blair (RB) - Holy moly, can the Blair Bears ever crank out those superstar running backs. Ryan Randall, Will Schany, Brad Shanahan from 1975 and Mike Thompson from my day in the late 60’s. Now you may be able to pencil in the name Dalton Lewis after last Friday.

The senior back crashed onto the scene during Blair’s opening night 40-27 win over Bennington. The versatile Lewis toted the football a staggering 49 times for a school record 370 yards. Dalton scored on runs covering 26, 4, 22 and 35 yards as Bryan Soukup’s Bears kicked off the 2017 season with a bang.

Even more amazing is the fact Lewis gained more yards in the Bennington game than he had all last year (337). Twice in that Bennington game, a Dalton Lewis touchdown run gave Blair some breathing room. His 22 yard TD run with less than a minute to go in the half, put the Bears up 34-13 after the Badgers had closed the gap to 28-13 with 4:03 remaining in the 2nd.

Dalton’s 35 yard scamper late in the 3rd frame widened Blair’s gap to 40-20 entering the money quarter. I think Mr. Lewis may like you to know that his O-Line, fullbacks Zane Tilson and John Sheets, and WR Dalton Ryan opened some pretty nice gaps for him to run through last Friday.

If history repeats itself in that Blair program, you will be hearing the name Dalton Lewis a lot more before the 2017 football season comes to a close.

The incredible junior runner actually split time at I-Back with classmate Evan Smith, a Tri Valley (Downs), Illinois transfer, who gained 1,620 yards a year ago. Kautz scored only once from 17 yards out, but ripped off runs 48, 28, 17 and 35 yards during the Neumann contest. The 48 yarder came on his 2nd carry of the Knights opening possession and set the tone for the evening.

With the young Knights offensive line looking more polished than anticipated on opening night 2017, Kautz may be in for an even bigger year than last season. The young man is such a thrill to watch, and with the addition of the hard, inside running of Evans, Jeff Bellar’s Norfolk Catholic bunch looks like a solid pick to make a deep run in the rugged Class C-1 playoffs this fall.

Dylan started at defensive back in the Neumann opener, so the dude may need a blow on offense occasionally and Evan Smith is the perfect answer to that situation.

Chadwick, who blitzed the airwaves for 2,104 yards and 25 TDs as a sophomore in 2016, hit sensational sophomore Xavier Watts for 3 strikes and 99 yards with a 35 yard TD reception amongst the three catches. Tyler also connected with junior All-State prospect Chris Hickman three times for 60 yards against Central. Two of Hickman’s receptions went for scores and covered 13 and 29 yards.

The consensus pre-season No.1 Burke squad will host 1-0 Creighton Prep Friday, a team Chadwick scorched for 394 yards and 4 touchdowns a year ago in only his 2nd start at the quarterback position for Coach Paul Lamongi. I wish I had a small plane to take me to that Prep/Burke at Burke Stadium Friday.

*Gretna Dragon Defense - Okay, brace yourself for this one. Gretna’s defense held a very, very fine Norris offense to 40 yards rushing, 23 passing and 23 receiving yards in their 19-3 win last Friday. You can do the math. The Dragons also held sensational All-State back Austin Schultz to the tune of 37 yards on 13 carries.

I’m still pinching myself on this one, but if you know Gretna head man Dave Shrader, you know this can happen, and often does for that Gretna “D”. Dave was an assistant under the very fine Chad Jepson, who compiled a 59-26 record in 8 seasons at Gretna.

Leading that ferocious Dragon “D” was one of my favorite linebackers, Joseph (Joey) Johnson, who logged 13 tackles plus making an interception. Caloway Soucek (#35) and Connor Fee (#58) each made 10 stops for the swarming Dragon defense, while seniors Cade Mueller (#55) and Braden Kanne (#65) added 7 stops each.

Gretna moves up a notch to No. 4 in the World-Herald ratings this week behind Elkhorn South, McCook and Skutt Catholic. The Dragons take their stout defense on the road to Crete this Friday.

*Cole Hanafan - Elkhorn South (QB) - It was going to take someone special to fill the talented shoes of graduated All-State quarterback Braden Wright and the 6-5, 240 pound Cole Hanafan was just the man to do that honor for the two-time defending Class B champs.

Hanafan passed his first test with flying colors in Elkhorn South’s 48-14 win over pre-season No. 6 York. The senior signal caller completed 13 out of his 25 passes for 265 yards and 3 touchdowns. Cole also ran 9 times for 62 big ones and was a load and a half to bring down. As Storm Coach Guy Rosenberg put it “Cole Hanafan played with poise, made good decisions, and protected the football.”

*Joseph Krause Seward (QB) - Junior quarterback shocked Crete with a game winning 74 yard touchdown pass to Ben Meyers, as the Bluejays rallied to defeat the Cardinals 38-33. The 6-0, 165 pound gunslinger ended the night with 17 of 27 accuracy, good for 333 yards and 2 TDs (1 INT).

Make no mistake about it, Krause is no stranger to big passing yards. Last season as a sophomore, Joseph completed 55% of his 190 throws for 1,667 yards and 14 touchdowns (7 INTS), but Seward finished only 1-8. The big night against Crete lifted Krause over the 2,000 yard career passing yard mark by a couple of yards.

Junior Carson Core led the Bluejay receiving corps with 152 yards on 7 receptions, including a 50 yard TD catch. Meyers also surpassed the 100 yard mark by hauling in 3 passes for 117 yards, including that 74 yard game winner after sneaking past the Crete defense.

The 6-4, 175 pound Liewer is a nightmarish matchup for any defender. Wyatt has made 48 receptions in his career, good for 809 yards and 10 touchdowns. He may easily catch 10 more scoring passes this season alone.

No slouch on defense either. Liewer made 3 stops in that GICC contest and picked off a pass too. Between he and Justin Appleby, the Eagles have the best 1-2 receiving punch in Class C-1.

*Chandler Bendorf - Ft. Calhoun (RB) (#31) - 5-10, 175 senior tore up the Conestoga defense to the tune of 200 yards on 17 carries and 3 touchdowns in Ft. Calhoun’s 33-14 win over the Cougars. Bendorf flashed some pretty swift wheels and quick starts out of that Pioneers backfield against Conestoga, especially on his 48 yard scoring dash down the far sideline.

Chandler had an equally, if not better yet performance of the defensive side of the ball. He recorded 10 solo stops, had 10 assists, 2 TFL and a defended pass. No surprise there since Bendorf made 114 tackles in 2016 and was an easy choice for All-District linebacker in his Class C-1, District 1 group that included state semifinalist Boys Town, 10-1 Arlington, a good Omaha Concordia team and a .500 DC West bunch.

The dude is a baller man, especially on defense.

*Tyler Pawloski - Pleasanton (QB) - 5-6, 150 pound junior quarterback was off and running in the Bulldogs curtain raiser against Shelton. The rock solid Pawloski, the defending Class D 126 pound wrestling champion, carried the mail 19 times for 159 yards and 4 TDs, and completed 3 of 8 passes for 42 yards and another score in Pleasanton’s 50-28 win over a much improved Shelton squad.

Pawloski’s touchdown runs covered 1, 9, 2 and 54 yards. His 13 yard first quarter TD pass was caught by Kessler Dixon. On defense, Tyler was in on 8 tackles and had a tackle for a loss.

This young man is the real deal, folks. Two time State Wrestling Champion and second year starter at the QB spot for Ricci Westland up there in Pleasanton. Tyler has taken some lumps early in his career on the gridiron at Pleasanton, but he’s dished out plenty of licks on defense and will just get better at his quarterback position this year and next.

*Cade Reichardt (WR), Baylor Scheierman (QB) - Aurora - Saw no official stats on this game but I was there keeping my own and these two gentlemen were outstanding despite the Huskies 38-8 loss to 2nd rated McCook. Reichardt, the 180 junior, reeled in a gigantic 15 catches for 156 yards and a TD (21 yards).

Scheierman, the Aurora basketball sensation, making his first ever start at QB, threw 41 times and completed 24 of those for 278 yards and a score. The nice thing about this was the very good overall pass protection he enjoyed all evening by a young, rebuilt Aurora O-Line.

It may seem foolish to pump a couple of guys that played for a team that lost 38-8, but the Huskies did not look that bad for most of the night. Yes, they had some costly turnovers, but simply wore down on defense and turned the ball over at the wrong time, giving McCook good field position.

Keep a close watch on Reichardt and Scheierman this season. Both are only juniors.

*Matt Masker - Kearney Catholic (QB) - All-State QB completed 13-18 passes for 261 yards and 2 scores in the Stars 33-20 win over Adams Central. Senior Brett Kaiser had two of the TD grabs while Jason Deitz caught the other.

*Evan Johnson - Adams Central (QB) - Johnson, Masker’s counterpart in last Friday’s Kearney Catholic/A/C matchup, completed 13 of 27 throws for 284 yards and two touchdowns. The sophomore fireballer connected with classmate Gabe Conant and senior Caleb Ackles for Adams Central’s two scores through the air. If you recall, Johnson started as a freshman a year ago and threw for 1,503 yards and 11 touchdowns in just 7 games.

*John Christensen - BDS (QB) - Big 6-1, 210 pound junior shocked highly touted Osceola with his four rushing touchdowns and another through the air, as the Eagles cruised to a 50-0 halftime advantage, on their way to a 56-24 win on the road. How good is BDS. Wow.