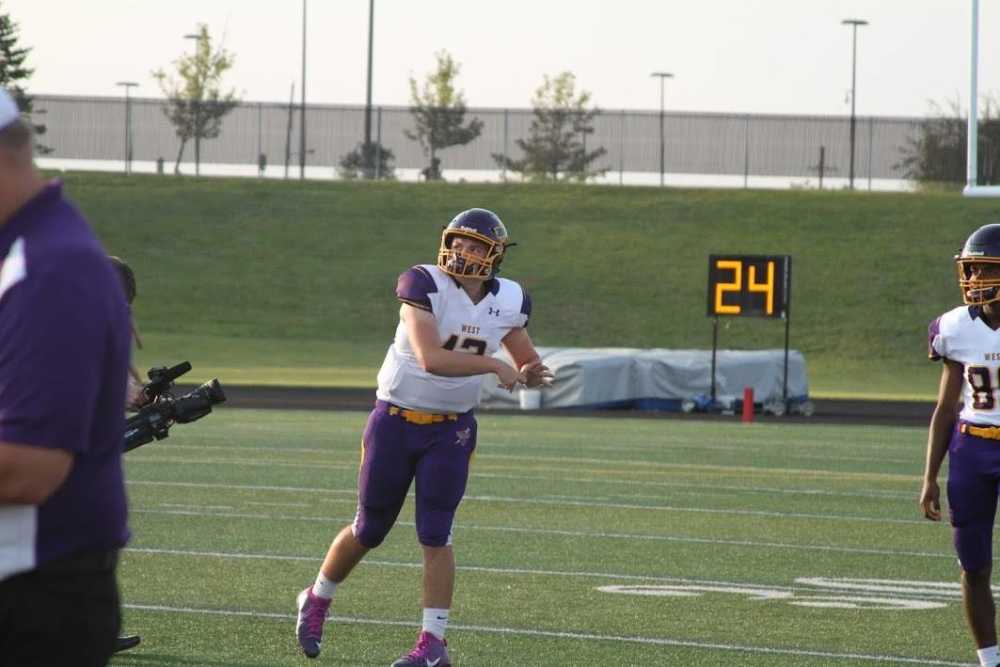 Opening week, 2017 is just absolutely loaded with eye-opening feats. The more I dug for game stats, the more I uncovered. And Please always remember this. There is more than one of these Friday Night Heroes blogs each week, often times three. So if you fail to see an outstanding performance by your favorite player, don’t panic, it will appear eventually. These are also in no particular order, by the way.

*Joe Dolincheck - Bellevue West (QB) - Hey, let’s break the Class A state record for Most Touchdown Passes in a single game in the 2017 season opener. Why not? Can’t dance and it’s too wet to plow, right Joe?

That eclipsed the Class A record of 6 in a single contest, held by six other QBs, including 3 former Bellevue West gunslingers, Dusty Broadrick (1996), Silas Fluellen (2005) and Jadyn Kowalski, who did in both 2014 and 2015.

A 64 percent passer a year ago, Dolincheck completed 27 of 39 throws for 443 yards Thursday and actually broke the record with 4:43 left in the game when he shoveled a 5 yard scoring pass to sophomore Jeyvon Tucker.

Joe’s favorite targets in the game were sophomore Xavier Betts, who hauled in 7 Dolincheck passes for 148 yards and 3 TDs (1, 33, 45 yards) and Betts classmate, Jeyvon Tucker, who logged 8 receptions for 133 yards. Tucker had 2 scores in the game, one a 5 yard reception, the other coming on a 6 yard run.

*Cedric Case - Lincoln High - Dolincheck wasn’t the only Class A quarterback making some noise on opening night. Case, the 165 pound Links junior, completed 21 of 26 throws for 285 yards and 5 TDs in Lincoln High’s 51-7 win over Omaha Northwest.

Three of Cedric’s five scoring passes were thrown to Zion Perry, who zoned in 7 receptions for 144 yards and scoring catches of 36, 15 and 25 yards.

The Links put things out of reach in the first quarter by sprinting out to a 34-0 lead over the Huskies. Case, if you recall, completed 68% of his passes a year ago as a sophomore, good for 1,880 yards and 19 TDS with only 5 INTs.

*Milton Sargbah and Zander Gray - Omaha North (RBs) - Oh my good lord. They said Omaha North’s line would have to develop a little before Sargbah and Gray could hit full stride. Yeah, right.

Both Sargbah and Gray surpassed the 200 yard rushing mark before halftime in the Vikings 37-14 win over Millard North, and each did it on less than 10 carries. The swivel-hipped Sargbah sprinted for 261 yards on 9 carries and scored on runs of 93, 93 and 12 yards. NO, I didn’t mistype “93” twice. The dude had two 93 yard runs. Zander “The Dancing Bear” Gray rushed only 9 times and gained 212 yards with a 65 yard TD scamper in there.

Football fans, that is frightening. I know Stu Pospisil cannot recall two Class A teammate backs running for over 200 yards in a game, and I would have think on that one too. Stu has seen a ton of Metro football though and should be on track with that one.

Cade Elwood, Millard North’s fine quarterback, ran for 135 yards on 24 carries in the Mustangs loss and plunged for a 1 yard TD. Don’t worry about Fred Petito’s troops, they’ll bounce back, they always do.

*Dylan Gentrup Boone Central/Newman Grove (QB) - The do-it-all senior QB has the Cardinals off and running in 2017. In Boone’s home opening 42-20 win over always tough Pierce, Gentrup completed 10 of 20 passes for 164 yards and 2 TDs. He also rushed 14 times for 107 yards and 3 more scores.

Dylan was the only returning 11-Man player that had a 1000 yard rushing and 1000 yard passing season in 2016. Gentrup’s go-to running back, Levi Krueger, provided ample running assistance in the win by rolling for 164 yards on 17 carries which included a 56 yard TD sprint. Kruger, a 5-9, 205 pound senior, has great football bloodlines by the way.

*Cameron Jurgens - Beatrice (TE) - The Husker football pledge caught 2 passses for a whopping 101 yards and rushed 9 times for 31 yards in the Orangemen’s 35-6 win over Ralston.

Jurgens TD reception went for 73 yards in case you thought he was not fast. Beatrice QB Trevor Schmale, Jurgen’s trigger man, was madly efficient with his 8 of 11 for 286 yard passing night. Besides the 73 yard scoring strike to Jurgens, Schmale found sophomore Andrew Mahoney for a pretty 81 yard touchdown throw.

Cam Jurgens is the real deal friends. Really scary athlete from top to bottom. I don’t make many promises but I can promise you the Beatrice product will make some noise in Lincoln before his career is in the books.

*Bryson Williams (FB/DL), Jack Strong (QB) - Lincoln Southeast - Williams, the Wisconsin recruit, lined up as the fullback in the top of the Knights Maryland-I formation and blasted for 2 TDs on short runs of one yard each. He aso made 8 tackles on the night and caused a fumble. The Knights rolled to a 30-0 halftime lead over rival Lincoln NE before disposing of the Rockets 37-0 as the final gun sounded.

Jack Strong, the 4 year starter at quarterback, made good on 8 of 11 passes for 130 yards plus a touchdown toss to senior Nate Trenhaile. Strong played only one series in the 3rd stanza before retiring for evening.

The 6-3, 290 pound Bryson Williams, by the way, will graduate from Southeast high school in December and enroll early at Wisconsin to get a head start on causing nightmares for the Huskers in the future.

*Jacob Johnson-Fairbury (RB) - Senior running back once again tore things up for Fairbury in the Jeffs opening night 61-10 victory over David City. Johnson carried only 9 times but managed to scoot for 245 yards. Five of those 9 carries went for touchdowns.

Johnson also had 3 solo tackles on defense, one going for a loss plus an interception. The All-State back now has 3,501 career rushing yards and 52 total TDs in his illustrious career and has started since his freshman season for the resurgent Jeffs.

VanLengen, the veteran 6-2, 210 pound QB, ran for 2 touchdowns and passed for 2 others in the huge opening season win for the Jags. Dax was 13 of 20 passing for 177 yards with scoring passes to sophomore Luke Rocheford and senior Jordan Brichacek. In a strange statistic, VanLengen rushed 5 times for a net gain of one yard, yet scored twice.

Now, about this Kade Hegemann dude. With 1:36 remaining in the game and the Howells-Dodge leading 26-20, it appeared the Jaguars could run out the clock. That changed when VanLengen hooked up with Jon Yosten for a completed pass, but the Jags lost the football when Yosten coughed up the football after a hard hit.

East Butler took over the Howells-Dodge 28. Tiger QB Dalton Bohac hit 2 time All-State monster Trevor Havlovic with a perfect pass. Havlovic then ran to the 6 yard line. Bohac scored on the next play for East Butler but the touchdown was nullified by a holding call. One play left for East Butler

Enter one Mr. Kade Hegemann. With 24.1 seconds left in the contest, Hegemann tipped away a Dalton Bohac pass at the 4 yard line to preserve the win for Mike Speirs Jaguars. Hegemann also made a whopping 22 tackles and pirated a Dalton Bohac aerial.

So, how can two teams be rated #1 in the same class, you say? No mystery. Howells-Dodge was Numero Uno in the Lincoln Journal-Star and East Butler earned the top pre-season slot in the Omaha World-Herald’s pre-season Class D-1 ratings.

And…….this was victory number 200 for Howells-Dodge had coach Mike Speirs. Yes Mike, it’s a huge deal because you are simply one of the best in the biz, my friend.

The versatile Koch ran for TDs covering 16 and 20 yards and also found senior Caleb Esch with an 84 yard TD strike. Koch then pitched a short 6 yard scoring pass to Joey Braasch to round out that first half scoring barrage for Columbus.

Michael Koch is also a standout on defense for the Discoverers, having pirated 4 enemy aerials a year ago, plus breaking up several others. Great player and nifty Dual-Threat QB as well. One of the best in Class B.

*Dalton Tremayne - Ponca - Multi-talented athlete caught 9 passes for 151 yards and a score and rushed for 66 yards on 13 carries with a 27 yard TD run included. Tremayne was also a terror on defense for the Indians, who opened 2017 with an impressive 24-13 win over Fremont Bergan.

*Korrell Koehlmoos, Logan Nitz - Lutheran High NE (Norfolk) (RBs) - Koehlmoos made sure he made a good first impression in an Eagle uniform. All the Wisner-Pilger transfer did was bolt 58 yards for a TD on the first offensive snap of the night for the Norfolk parochial school. Koehlmoos would add another TD on an 11 yard run with 6:49 left in the first quarter, on his way to 175 yards on only 10 carries night as the Eagles pounded Cross County, 65-20.

Not to be outdone, 5-9, 160 pound sophomore Logan Nitz rambled for 185 yards on just 5 touches. Nitz hit paydirt from 9, 9 and 65 yards away as the Lutheran High NE rushed to a massive 57-0 halftime advantage.