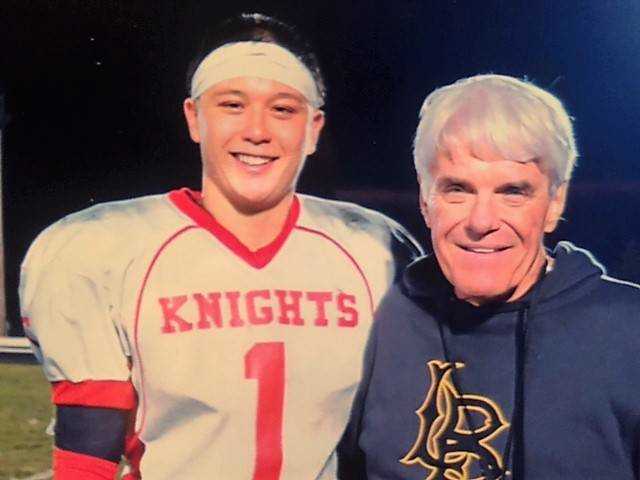 A real star-studded lineup of players to spotlight on this day. On offense, we tell you about a junior quarterback who enjoyed a breakout sophomore season, a junior running back who just happens to the the fastest high school athlete in Nebraska, and Class A runner who was under the radar to some a year ago.

On the defensive side of the ball, we talk about a college prospect lineman, a head-hunting linebacker, and a Safety that does it all.

Oh, and by the way, the countdown to opening night stands at 33 days away.

Tyler Chadwick had a very good year in his debut as a starter a year ago. Considering the fact he was only a sophomore, you could elevate that to an outstanding campaign.

Chadwick has a strong arm and is a whiz at firing the ball to a spot and letting his receivers run under the throw. Very mobile under duress and can throw on the run.

The youngster led the Bulldogs to an 8-3 season in 2016 including a playoff win over a nice Pius X squad.

In the regular season finale against eventual Class A and undefeated Bellevue West, Chadwick had his troops within 2 seconds on knocking off the Thunderbirds.

Burke led 42-38 with 1:13 left in the game in that one that saw the talented sophomore throw for 267 yards and 4 TDs with no interceptions.

Take away the Omaha North game where Chadwick was 1 of 13 and the 2nd round playoff loss to Lincoln East where he was 7-19 with 2 INTS, and Tyler’s completion percentage would be over 60%. East still only beat Burke 27-24 that night.

Now…..Tyler Chadwick will be tested this fall due to the fact he lost 1,782 of his 2,104 receiving yards to graduation. That’s a staggering 85% of you passing offense, so this season could define Chadwick’s talent evaluation but the stable is not bare for Paul Lamongi offensively.

Okay, I’m biased here. I have to admit this young man is at the top of my list for football, track and being in the genuine human being category. Just a terrific young man with a great story behind who he is and what brought him to where he is right now.

Dylan Kautz is already a two-time 1000 yard rusher, two time Class C 100-200 meters champion and a ball carrier that improved from a “fast sprinter in a football uniform” to a top notch RB with moves, cuts, and power to boot.

Kautz enters the 2017 football season with an electronically timed 4.38 forty yard dash. That’s NFL caliber folks. He has run a :10.53 hundred, posted a 31” vertical and maybe more importantly, benched 260 pounds. Pretty good for a 5-9, 170 dude that can fly. That strength is going to be crucial to keeping Kautz healthy for Norfolk Catholic.

The improvement from freshman to sophomore seasons was huge to me. Jeff Bellar is not afraid to send Kautz right into the heart of the defensive line, but you get Dylan to the edge and he gets a step, there’s not a player in the state that runs him down.

Kautz is a 1st class Master at planting then changing directions in a single explosive move and developed a pretty nice stiff arm somewhere along the way last season. Dylan’s vision also sharpened along with his ability to keep his balance after a hit.

Another thing the Knight speed merchant has going is his pad level and the fact he can hide his 5’9” frame behind those big Norfolk Catholic lineman.

Kautz is capable of back-to-back 2,000 yard rushing seasons, although he may have company in that Norfolk Catholic backfield with the addition of Tri Valley (Downs), Illinois RB Evan Smith, a junior who rushed for 1,620 yards for the 2A team a year ago. Class 2A schools in Illinois have an enrollment of 309-386 and are part of an 8 class system for football.

Any other year but 2016, this young man would have been a no-brainer for the Class A All-State backfield, but with Jaylin Bradley, Milton Sargbah, Moses Bryant etc., Belt was lost in the shuffle.

Not sure what Brody benches, but the kid can power his way through tackles and bowl over defenders if necessary. He possesses a smooth, sliding running style where he just glides past players “like smoke through a keyhole” as Barry Switzer would say. And he was describing Barry Sanders when he said that, my friends.

Okay, first off, this is a Tight End we are talking about that hauled in 50 aerials for a fat 873 yards. You want to see something really entertaining, watch Matthies break loose on a pass pattern, make the catch then outrun the defense. It’s called football speed that seems much quick his recorded 4.9 forty time.

The talented senior will have a new QB this season, plus a new head coach to work with, but situations such this usually work out and I personally think incoming head man Tim Johnk is a top notch high school football coach. It also seems like in past years, a new young talent at the quarterback position surfaces for Creighton Prep when a veteran graduates.

You want yards after contact? Then Grant Matthies is your man. It is humorous to watch him give defensive backs a piggyback ride ride for 10 or 12 yards. And those boys thought only their Dads did that back in the day.

The Junior Jay strongman is a also a tough blocker and can slip out of that block in an instant to haul in a screen pass in busy traffic and fire up the afterburners. Loves to run over people.

This is no stretch. If I played offense and knew my number was called to touch the ball on the next play, I’d be saying my prayers if Welsh was across the line from me. This hulk of a young man that benches 285, and squats 425 seems just plain mean.

Evan Welsh is drawing recruiting attention this summer and could honestly play on either side of the ball in college according to World-Herald recruiting specialist Mike Sautter. The guy is that good. He stated in Sautter’s last report on him that he was heartbroken he didn’t make All-State his junior year.

He was on my All-State list, that’s for sure. No doubter in my mind.

Hand fight with Evan Welsh as an offensive line blocker and you’re usually wasting your time and his. Undercut him and he will immediately spring to his feet, angrier than ever, and punish the ball carrier with even more vengence. Welsh has a habit of throwing quarterbacks around like rag dolls too. And lest we not forget, Welsh runs a 4.9 forty for good measure.

A vicious blocker on offense, Evan Welsh will be just one of a good nucleus returning for Bishop Neumann this fall. Yes, they graduated some serious talent in 2016, but there’s plenty more where that came from. The big guy should enjoy a fruitful 2017 or the Cavaliers.

Let’s just make a late New Year’s resolution to call this gentleman Mr. Welsh next time we see him.

If Jake Archer isn’t the finest pure, form tackler in the state, he has to be close. Good lord. Needless to say, he was Skutt Catholic’s leading stopper last year and Head Coach Matt Turman is sleeping like a baby these days knowing this dude will back for his senior season this fall.

Jake Archer is a headhunter from his linebacker position for the SkyHawk, pure and simple. You have a football in your hands, he’s gonna find you. Archer is attracted to the football like a rare earth Neodymium magnet (you’ll have to look that one up). He just disposes of everything in his path tracking the ball carrier and his lateral movement is up there with the Class A linebackers.

A shining example of how strong and aggressive Archer can be was illustrated on the bone jarring tackle he inflicted on Ralston 1000 yard runner, Devin Mercuris. Archer just absolutely raised all kinds of chaos from start to finish in that Ralston game. He feasted on the Rams that night.

On offense, Jake Archer is about as talented a lead blocker as you will find. Go back to the 2nd quarter of the Class B championship game in Lincoln last November. Remember the 80 yard TD run by Skutt’s Kurt Randall? It was Archer’s crunching lead block on Elkhorn South’s Cole Hanafan that enabled Randall to go the distance on that play. When he is called o to carry the football, #49 is capable of going the distance with his 4.52 forty yard dash speed.

To me, Jake Archer is a solid Super-State selection in 2017.

Simon Otte does it all for the Dukes, always seeming to come big in big games. You know how much value that kind of player has for a football team. And the thing about Otte is the fact he can come up with the big play on offense, defense or special teams play. The kid never comes off the field.

Not many players in the state playing the safety position are better at zooming in with the radar on the man with the football than Mr. Otte. Simon never, ever overruns the play on defense. The dude has a unique way of slowly flowing toward the developing play, bringing the ball carrier into range, then exploding for the crunching tackle. Incredibly strong from head to toe for 180 pounds.

As a RB on offense, Simon Otte really piled up the yards when York needed the ground game moving. Against powerful McCook, the super junior waited until 19 seconds before halftime to rip off a highlight reel 51 yard touchdown run that staked the Dukes to a 7-3 lead at the break. He also added a victory clinching 16 yard TD run with 1:14 left in the game to give York a 20-11 win on that warm September 24th evening in the park.

Otte is also a dangerous receiver out of the backfield for Coach Glen Snodgrass and is even more lethal after he catches the pass and picks up those great downfield blocking the Dukes are famous for.

I cannot think of a player right off the top of my head that is more versatile and more valuable to his team than Simon Otte is to the York Dukes. The young man does it all and never runs out of fuel.