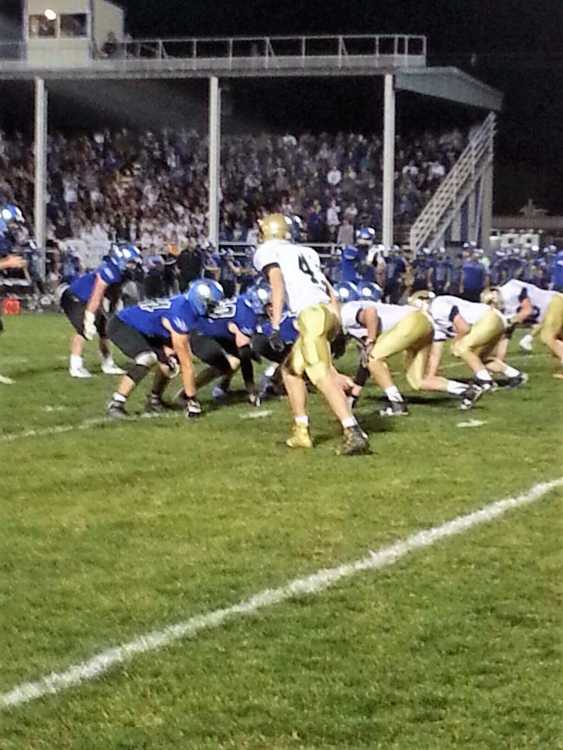 Aquinas and O'Neill battle in the 2016 C-1 semifinals.

We’ll salute at least three players to keep an eye on in 2017 in each installment. This is not a rating system by any means.

Personally, I do not like rating high school football players in my articles. First of all, football is a team sport, and secondly, these are young men at the high school level. Let them soak up the learning experience and not worry about who is individually #1 etc. Leave that up to the “recruiting specialists” that enjoy that type of thing. That’s cool, just not my bag folks.

Hit the spotlights and get this 2017 preview on the roll. Remember, these are not ratings and are in no particular order.

Masker can truly be considered a Pro-Style quarterback. Big dude who can absolutely destroy a defense with his quick release and his pinpoint accuracy.

Actually lowered his average release time to around 2.6 seconds after that quick 3 step drop. Even more impressive is on a straight drop-back with no fake handoff, Masker releases it right under 2 ticks in that Stars Gun formation. Bang.

Mr. Masker is also a terrific, elusive scrambler with an incredible eye for finding an open receiver. Also rarely fumbles (once in 2016). One step above never.

He can throw on the run against his body and heave it a mile and be dead on target.

The only consolation for defenses is that Masker rarely runs, but he’s strong as an ox which makes him difficult to bring down behind the scrimmage line.

Tall, slender and nearly impossible to sack. I saw Thramer play 5 times a year ago and cannot recall seeing him sacked one time. Same exact completion percentage as Masker, but has the capability of taking off on the run. (366 yards/9 TDs in 2016)

Alex Thramer can play defense too, as witnessed by 2 picks and 6 pass break-ups a year ago. Just an all-around player who may just pad that rushing total from a year ago.

How do you play 13 games, throw 215 passes and not suffer an interception? It’s that Ewing, Nebraska magic, man. Really like this kid. Excellent on the hardwood as well.

Bryant is considered by many as the best RB in Nebraska. Three time 1000 yard rusher and only the 6th player in history to top that mark as a freshman.

Moses has already piled up 4,055 yards on the ground with 74 touchdowns to go with that total. Add another 785 career receiving yards and an additional 8 scores and you have a very special athlete.

Elkhorn South has positioned itself for a third straight title run and Mr. Bryant is an integral part of that run. As super Head Coach Guy Rosenberg put it “True game-changers alter the outcome of the game. Moses makes big plays at big moments in all three phases of the game.”

Also keep in mind this young man benches 315 pounds friends. Strong, fast with superior football smarts, Moses Bryant is on the verge of another big year. Not many in his class.

His 67 catches and 1,015 yards are both school records at Westside, who has had some pretty salty receivers in the past. No secret to Schweigart’s success. It’s his patented stop and go magic.

Playing in Class A at 160 pounds, you have to figure something out, and this kid leaves defenders with a hand full of air when he stops on a dime, then turns on the afterburners heading downfield.

Trouble is, if you play him loose, Warrior QB Dylan Plautz will find him on a short pattern and you’re dealing with Schweigart in space. If you play right on him, #1 charges at you like he’s headed downfield on a fly pattern, then stops, gets you turned around and away he goes.

Here’s the scoop on Caleb Schweigart. It doesn’t matter who Westside plays. #1 is going to catch his passes and get his yards. Schweigart had 7 or more receptions in 7 out of Westside’s 10 games and was never shut out. The Warriors ended up 5-5 a year ago and more importantly, Caleb has Dylan Plautz back at QB this fall.

This young man is money every time he straps on the pads. Every coach's dream.

Okay, first of all, Wisconsin knew what they were doing when they offered and Williams accepted back on June 20th. Huskers would probably have offered any other year but this one. Bottom line…..Mr. Williams is an outstanding football player with a motor that never seems to stop.

Very quick off the snap, Williams has quick feet to match. Very skilled at fighting off blockers, which often times come in pairs. Grand Island triple-teamed him a few times out here on the Islander turf.

There are so many things that do not show up on Bryson’s stat line. It says he had one pass defended. I’ll guarantee it was more than that. Williams also gets to the quarterback in a hurry and repeatedly disrupts pass attempts. When you see 290 pounds of runaway locomotive bearing down on you, that ball is going to leave your QB’s hand in a rush. It’s called survival in panic mode.

Maybe the most important thing I see in Bryson Williams is the fact he never gives up on a tackle. Always pursuing. Never quits until he hears the whistle.

Wisconsin’s gonna like this dude. The Huskers will not when it comes time to face Bucky.

Is this how the pre-season Class B Top 5 will look?