Palmer's diversified offense too much for CWCE. 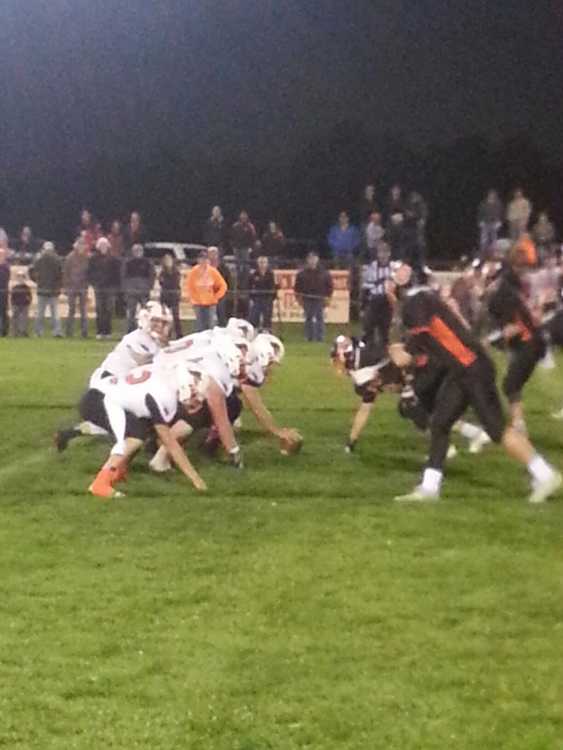 Palmer's diversified offense too much for CWCE.

Palmer's tricky, deceptive offense, four years in the making, was just too much for CWCE, as the Tigers came away with a wild 68-41 quarterfinal victory in a battle of undefeated Class D-1 football teams.

Chambers/Wheeler Central/Ewing, who finally had all-state running back Daniel Libolt cleared to play football after sitting out with a broken bone in his arm, took two early leads but just could not match the tough-to read Palmer offense.

This is an offense that can burn you on the ground or through the air, and on this night Palmer head coach Nathan Glause decided to throw a deadly run/pass mix at the Renegades that proved lethal.

There was enough scoring in the first quarter alone (32-14) to indicate Palmer might make a runaway of this quarterfinal matchup, and by halftime the capacity crowd circling Palmer's beautiful grass field had to be wondering if the scoreboard was going to short circuit with it showing the Tigers leading 54-33.

CWCE came out with some serious defense following the halftime break to force a scoreless third quarter, but the 19 point deficit was just too much to make up as Palmer continued their march to Lincoln with the 68-41 triumph.

Palmer QB Kaden Reimers, who came into the game with 1,826 yards passing, was deadly accurate with his throws, hitting the bullseye with his first 13 aerials before a suffering a miss. Reimers passes, which appeared to be short handoffs many times, appeared to confuse the Renegades as well as yours truly.

When all was said and done, the Palmer senior signal caller cashed in on 28 of 36 passes (78%) for 198 yards and 4 touchdowns with not a single interception. But the Tigers also balanced their passing attack with a potent ground game, led by the quick-as-a-wink Hunter Reimers.

CWCE, who lost a 22-20 heartbreaker in last year's Class D-2 state championship game to Humphrey St. Francis, competing as Chambers/Wheeler/Central, scored on the very 1st play from scrimmage when Daniel Libolt skirted around his right side for a 65 yard TD jaunt.

Palmer came right back to square things at 8 each with a 3 yard Kaden Reimers scoring run.

It took only 3 plays for the Renegades to respond on the ensuing possession. 5-7, 140 pound junior quarterback Carter Croxon found Libolt in the clear and connected with the speedy junior for a 65 yard scoring strike.

The 14-8 lead CWCE enjoyed with 8:36 left in the opening quarter would be their last of the night and their season.

CWCE matched touchdowns with the Tigers in the 2nd quarter, but still found themselves trailing by 19 big ones at the halftime break, 54-33.

The Renegades looked both mean and angry coming out for the 3rd quarter. After forcing two straight Kaden Reimers passing misfires, the visitors gained good field position at the Tiger 31 following a short punt by the Palmer QB.

But the Palmer defense continued to come up big when it mattered and the teams battled to a scoreless draw in that 3rd quarter, a sharp contrast to the scoring explosion witnessed by the masses during the 1st half.

By that time the 4th quarter rolled around, CWCE appeared to be weakening and the Tigers closed in for the kill, putting the game on ice with a two short Hunter Reimers scoring runs. The talented senior scored from 4 and 7 yards out in a span of 2 minutes, 16 seconds to swell Palmer's commanding lead to 68-33 with 9 minutes still showing on the clock.

Renegades quarterback Carter Croxen did flash one more display of his fine passing skills with a pretty 44 yard scoring strike to Connor Croxen, whom he had earlier connected with for a 21 yard TD pass.

Palmer improves their season record to spotless 11-0 with the big win and will head back to Burwell for a semifinal matchup with the Longhorns, who pitched a 28-0 shutout on undefeated Elm Creek Tuesday night on the road.

If you will recall, Palmer went up to Burwell on September 9th (Week 3) and knocked off the #1 rated Longhorns 42-38, alerting the Class D-1 football world the Tigers were for real.

Palmer ended the night with 223 rushing yards, plus that 198 yards through the air. Hunter Reimers led the rushing game with 123 yards on 20 carries and three TDs. Throw in his 70 receiving yards and another TD, you have 193 total yards and 4 scores for the 180 senior standout.

Junior Spencer Wichmann added 62 yards on 13 carries for the Tigers, 46 of those coming on a nifty 46 yard TD run in the 2nd quarter.

For CWCE, who closes out a very successful 2016 season at 10-1, Carter Croxen led the yardage parade with his 275 yards through the air on 11 of 19 passing. The junior QB threw for 5 touchdowns on the night, also suffering 2 interceptions.

Fleet footed Zane Patrick had 2 receptions for CWCE, both going for TDs covering 66 and 51 yards within 3 minutes of each other in the 2nd quarter.

Connor Croxon also hauled in two scoring strikes, while Daniel Libolt led the Renegades ground game with 126 yards on 15 tries and a score to go with his 92 receiving yards on 4 catches.

Libolt ends his junior campaign with an unofficial total of 826 rushing yards after sitting out nearly 4 games with that broken arm.